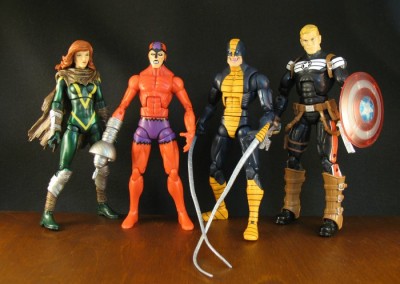 So there’s this little toyline called Marvel Legends that put out a few toys and then stopped suddenly, going into a state of suspended hibernation so deep that it was found hanging on the wall of Jabba’s palace. But finally, it’s back. But is it good? Let’s find out together. Of course everyone already has these, but play along anyway.

When wave 1 was first announced, I don’t think it truly blew anybody’s mind. It had some necessary characters, sure, but there was a hint of bittersweetness to it. I think everybody wanted to see that Hasbro had taken the time to learn from their mistakes and blast out of the starting gate with full on nitrous fury, slam-dancing in our faces with every single character off our collective top ten lists and brand new 100 percent fresh bodies, jamming their hands in our wallets. Instead, they sort of…trotted out, waved to the crowd, and winked.

As a wave, there’s really nothing wrong with it at all, it’s got the heavy hitters, some much needed villains, and a great, much needed build a figure, so I’m not really sure why when pictures first popped up it hit with more of a thud than an explosion. But that’s the hell of expectations: nothing lives up to them.

A couple things pooped on the initial parade. First and foremost among head-scratchers, there was some chick named Hope Summers. A relative newcomer to comics, she seemed an odd choice for the lead female in the return of this near-flatlined…line, when there are so many other females that one could argue deserve a spot ahead of her. Then there was the choice of bodies used. Whether it’s Constrictor using the absolutely exhausted 50th generation Bullseye body, or Klaw being put on that old-before- its-time Silver Surfer body, there was a mystery as to just what they had been doing during that time away from making 6 inch toys. Maybe we were hoping for too much right away, but I know I wanted to be blown away by all new bodies and immediate gratification.

With so much anticipation, the rebirth of Marvel Legends couldn’t help but disappoint just a little. So with the incomplete wave I’ve managed to track down so far, I’m going to use this review and all reviews forthcoming to ignore the well-worn criticisms of body choices and all that that have been covered and recovered ad nauseum, and strip it down to the bare basics: does this toy have play value. I can get caught up in the minutiae of scale and body choice and blah blah blah as much as anybody, but you don’t need me to tell you any of that, because we’ve already heard it all. So what I’m going to tell you is this: is this toy fun? The answer is surprising. 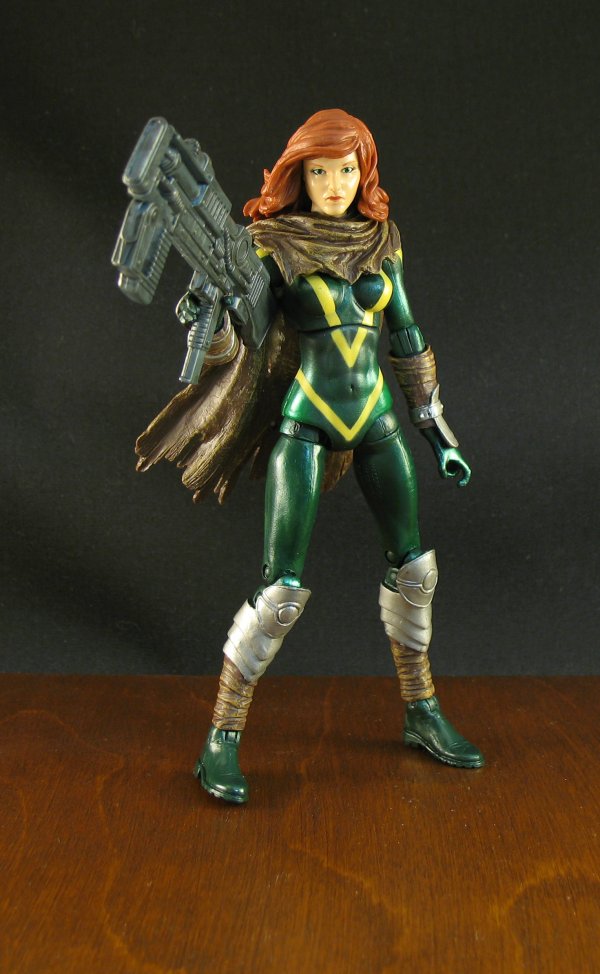 Let’s start off with Hope Summers. Being admittedly sick of most mutant stuff after Whedon’s Astonishing run, I’ve never read a single comic featuring her, so I don’t really know if she’s a cool character or not. I know she was a big part of Messiah Complex, and one day I need to actually get caught up on all that stuff, but I came to the figure more ignorant than I usually care to be. As a toy, she’s ok. She uses Hasbro’s stock female Elektra-borne body with new parts, with all the particular failings of that body—thin legs, not much torso crunch, awkward 45 degree hips. 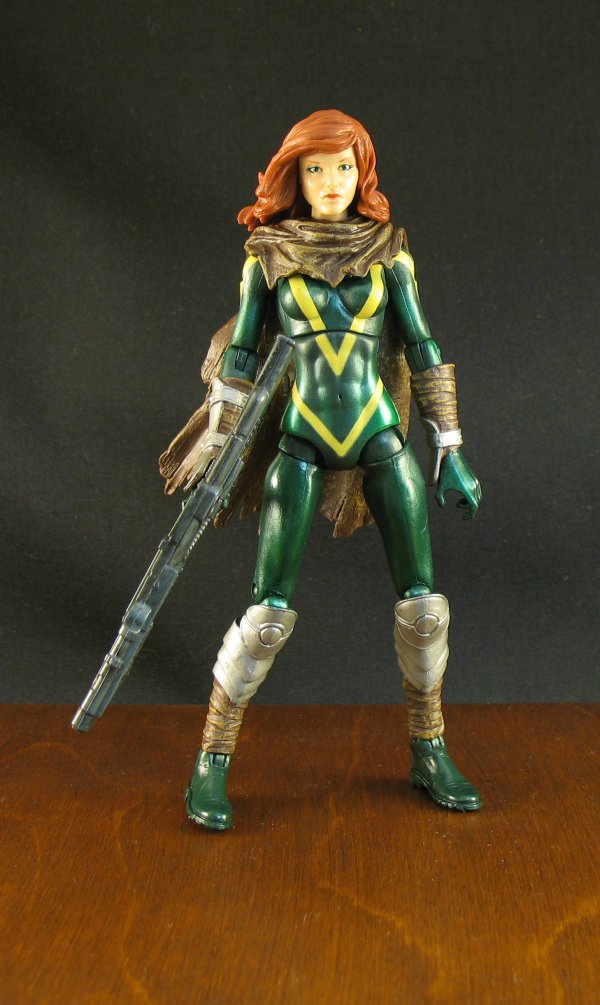 She has a headsculpt that looks like somebody but I can’t figure out where I’ve seen that face before. Some actress…something about that honker is familiar. Right out of the package, she was stuck in multiple places, and her limbs were as rubbery as a dental patient hit with twice the dosage of anesthesia. Once that was all fixed up, she seemed pretty cool, nicely sculpted cape and a bit of a shimmery paintjob. Apparently she’s supposed to be the savior of mutantkind. I sort of assumed that was Morrison, but then Chuck Austen happened. Maybe Hope was sent back from the future to retroactively scrub away anything Chuck Austen did. Here’s hoping!!11!1 Personally, I think they stuck her in this wave purely to tell Marvel Legends fans to have Hope, that the line will be getting better. I hope I’ve made enough Hope puns. Seriously, stop. 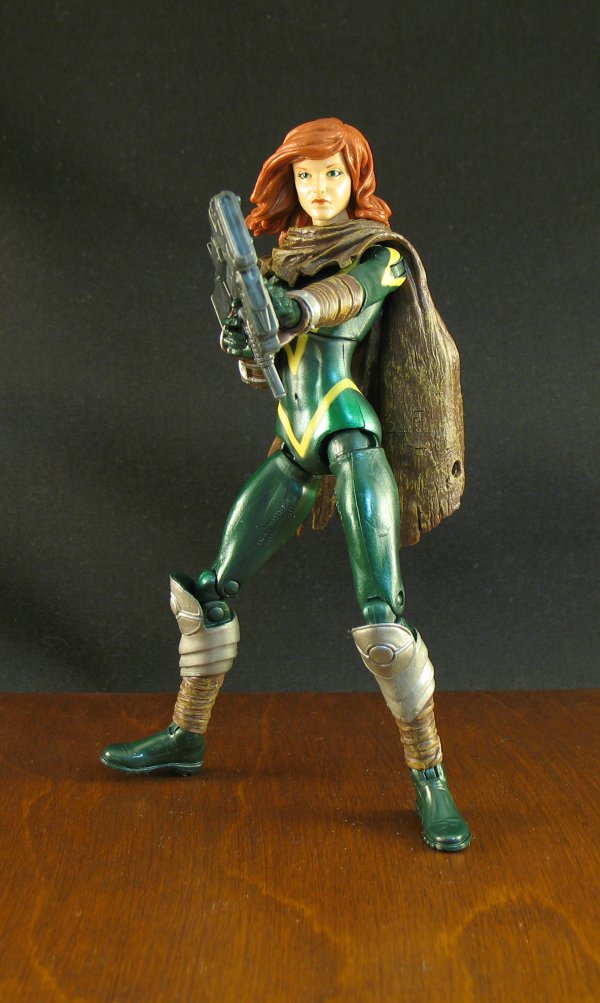 But anyway, your fealty to this figure will depend on your thoughts about the Hasbro body and the character. Otherwise, she’s as well-done as can be, with a nice BHG (Big Honking Gun). 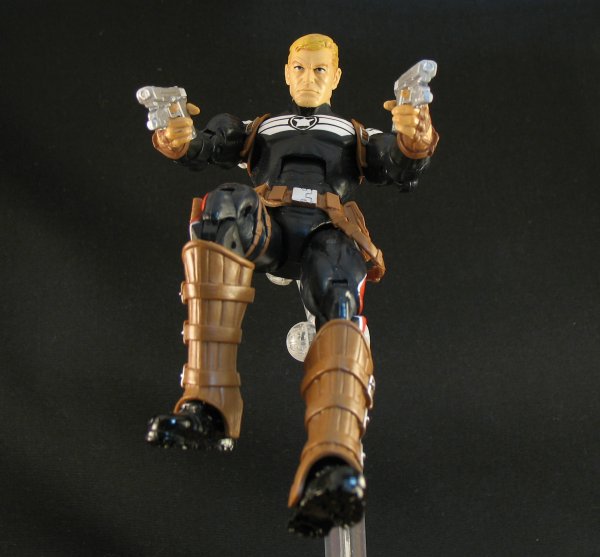 Next up is Commander Steve Rogers, wearing a snazzy costume that is already outdated, as he’s back to being Captain America. Modern has failed once again. But I dig this look for him, it’s like James Bond if James Bond had been shot full of superjuice and decided to ditch the tux and grab some spandex. I don’t think Steve got enough of a chance to play around with this look before he was shuffled back into his familiar red white and blue. But we all knew he’d be back in them soon, so at least he was able to get a tan across his entire face instead of just the lower quadrant. 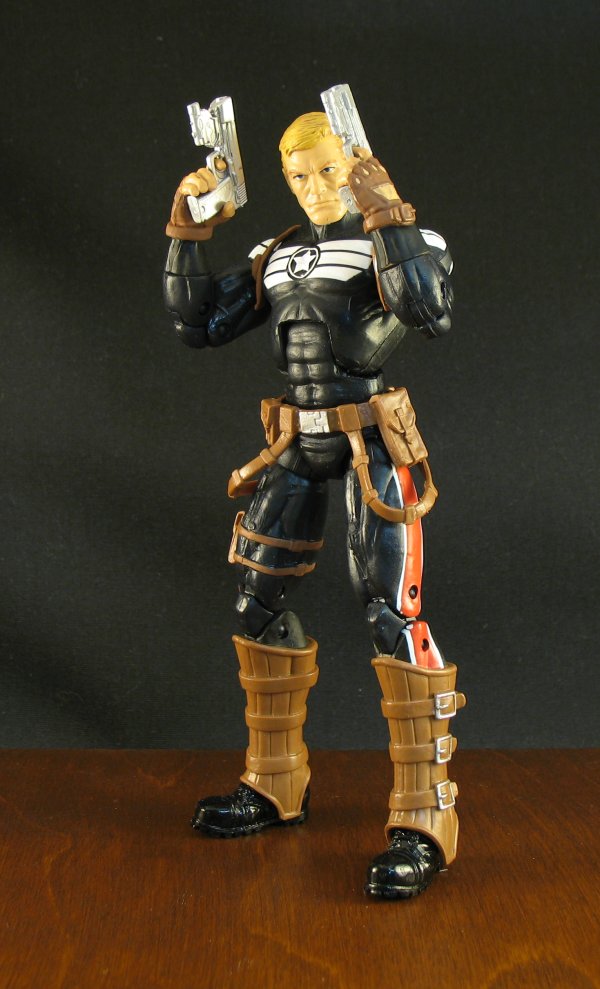 Much has been said about the head size and lower leg length. Technically, his proportions are finally accurate. Since most toy heads are smaller than they should be, Steve finally has room for his entire brain and not just a section of it (which finally explains what these guys have kept in their pouches) and his shins are not cramped. But that correction in proportion means he not only towers over his fellow toy brethren, but over previous version of himself as well. Not that people often have too much opportunity to stand beside themselves unless literally beside themselves with rage at toy prices, but I digress. Steve comes with either a solid shield or a clear shield, and darker or lighter lower legbraces. Luckily I ran across the clear, which I believe is the version he should have while wearing this costume. The shield snaps tight to his arm or his back, although that’s a bit unnecessary in the case of the clear version. He’s got very nicely done gun-gripper hands that hold his dual handguns very well, and overall, he’s got a great range of pose-ability and personality. 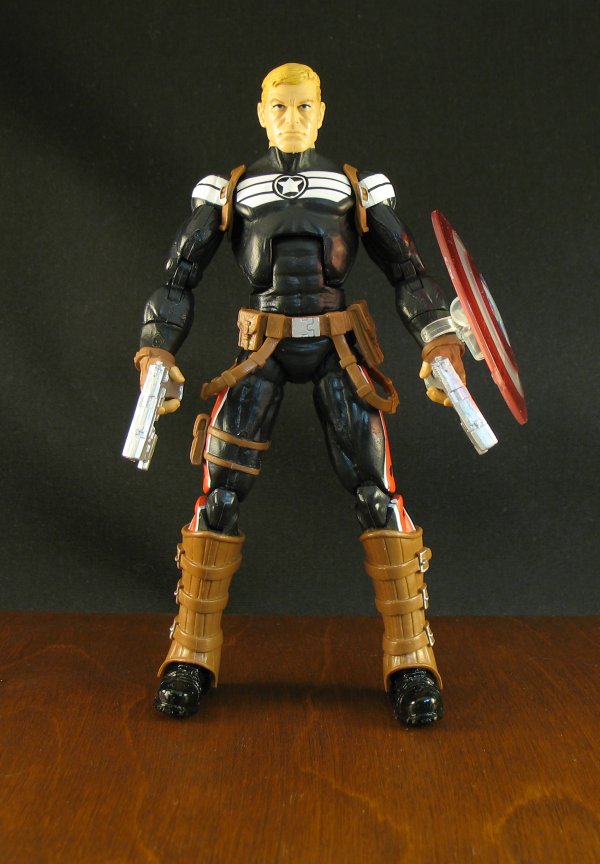 The lower leg sculpt hinders the bend of his knee somewhat, but he can still get down and boogie if he needs to. The headsculpt is well-done, one of the more evocative and expression-laced ones in a while, with tons of attitude, and actually looks like he should look, unlike that unmasked FO sculpt which looks like Steve sucked one too many Lemons over the course of his heroics. So if you can get past the older bodytype and all the troubles therein, the toy itself is a fun little time capsule of a brief arc in the Story of Steve. 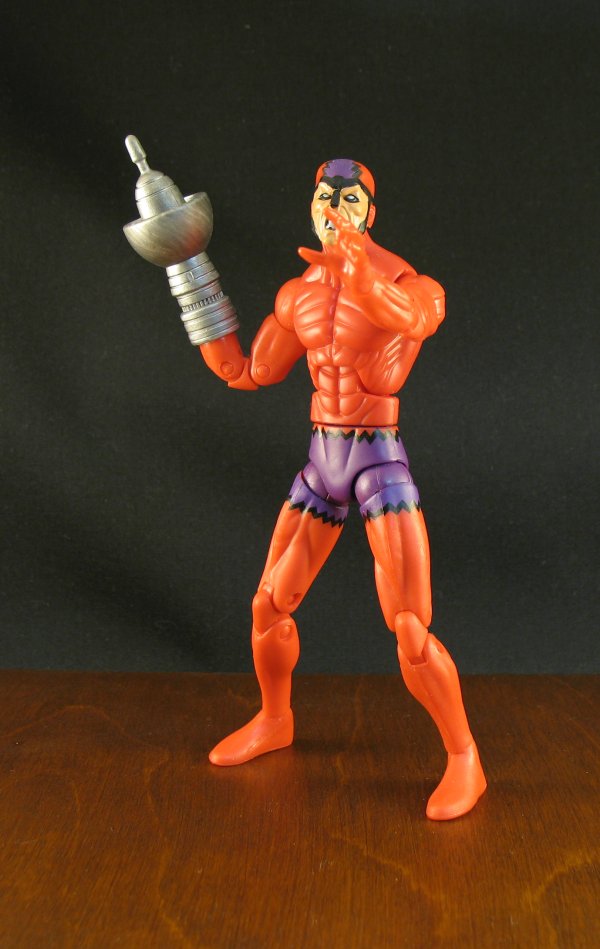 Next we come to the master of sound, Klaw. I think many of us who collected the Secret Wars line back in the 80’s wanted a Klaw figure back then, as he was fairly crucial to several plotlines in that book. But that line went in a weird direction and then died, so many chances died along with it. Because of that, Klaw debuted in the smaller Secret Wars themed two packs of the MU line first, and I think everyone was hoping he’d get a 6 inch figure as soon as possible. Well, he did.

No, he really did. I have proof. 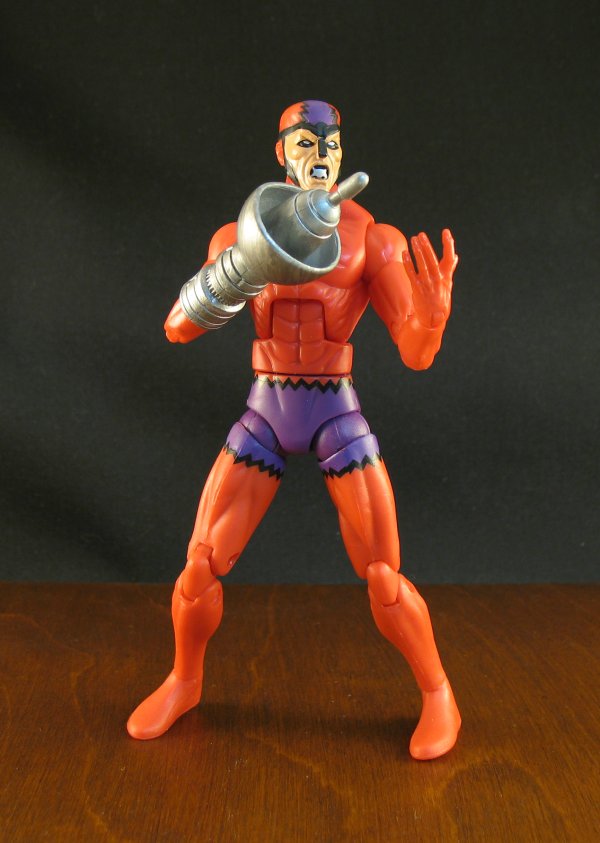 If this body was an absolutely horrible one for Silver Surfer, and sweet hambone was it ever–it makes way more sense for Klaw. In fact if by some twist of fate and contractual obligation they had to put one more person on this body, then Klaw works as the final character to use it for. But now they need to melt down the steel molds and never use it again. Ever.

Ever, Hasbro. I will roll up a big thick magazine and hit you with it if you use it again. 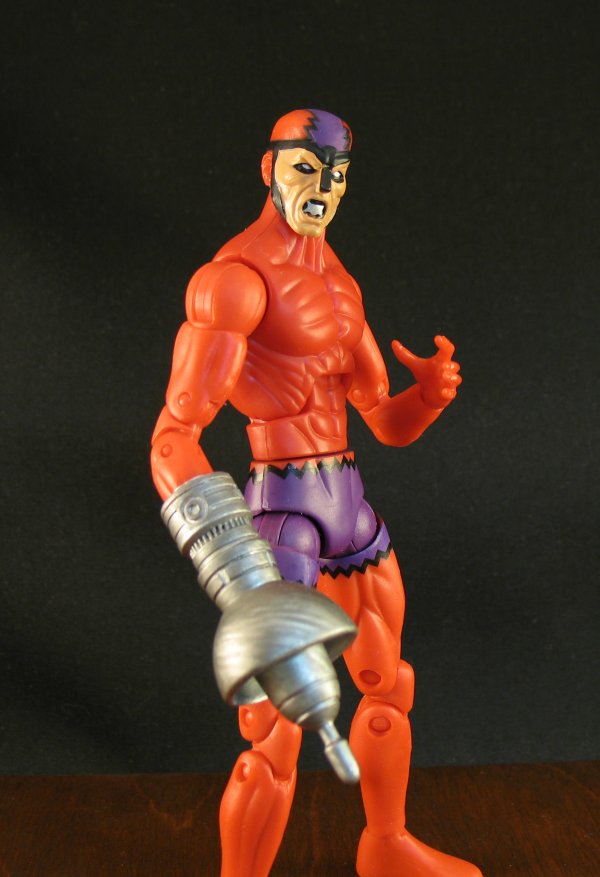 A common opinion about this toy is that since Klaw is made of solid sound this body’s more simplistic sculpt can be thought of as more acceptable for him. And you know what, fine. I can play that game. Done. Mental switch engaged. It’s at least a very well articulated body; there’s not a hasjoint to be seen, it’s all doublestuff as far as the eye can see. Because of this, the body does have a great range of expression, and the skinniness of the body works in his favor, giving him a smaller, lankier look that befits his more sonic nature. Except he will not deliver food on roller skates. 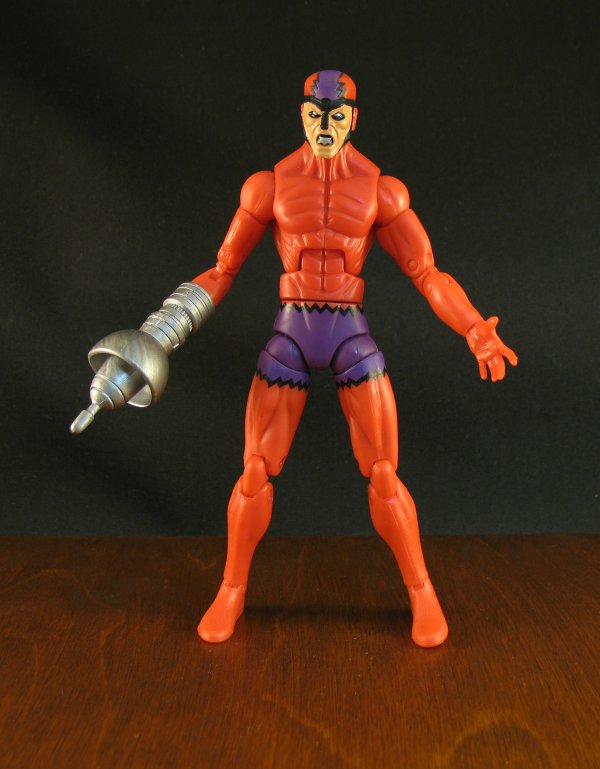 So with those issues aside, as a toy it works and it works well. The headsculpt is appropriately evil, his sonic arm is a tad large but still reasonable, and I’m glad to finally have the character in 6 inch form.

Now let’s turn to the final figure, and the one that suffers the most out of the four; Constrictor. 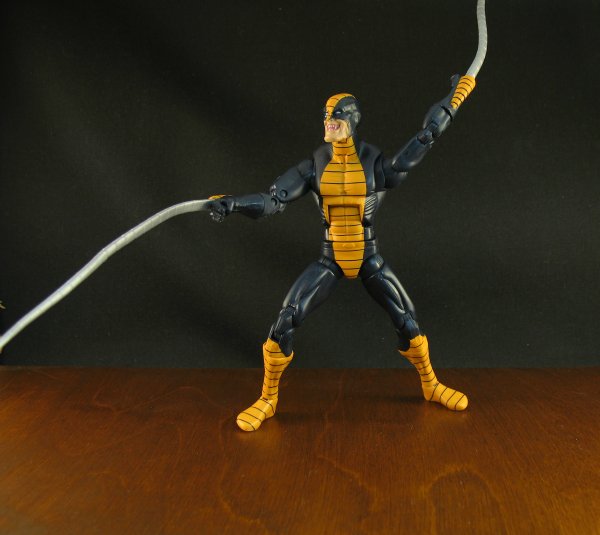 First off, he’s on that body. That body that keep popping up over and over and really needs to be retired before it kills again. But the good part is that it doesn’t have those flipper feet this time around like all the heroes are heading to a pool party. The trade off is that the ankles suck, just forward and back, no side to side, plus some redundancy in both shin and ankle swiveling. But at least the costume décor renders the shin swivel slightly less noticeable. 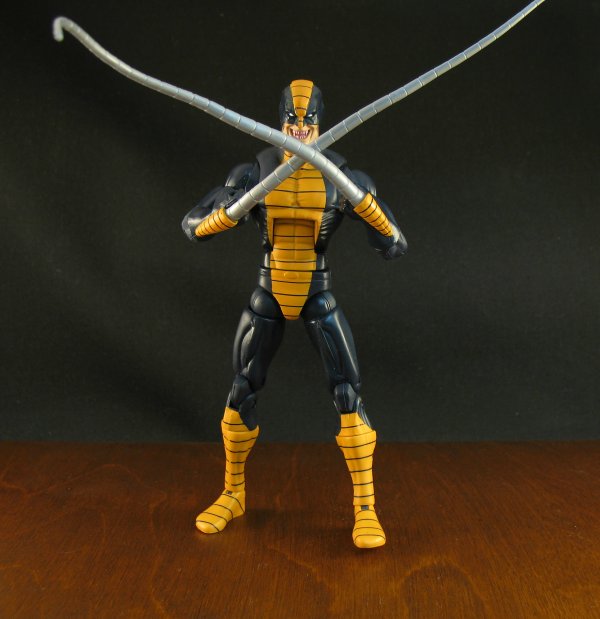 The most important part of gimmicky villains and heroes is how well their gimmick is pulled off. Well, Constrictor’s 6 inch figure suffers the same fate as his 4 inch version: the coils are kind of…there. They’re not really bad, and with some smudging some cool stuff can be done with them, but I can’t help thinking some strong bendable wire inside would have amped up the play level, even if the coils had to be longer to accommodate. And no guy will complain about having longer coils. Or…something. 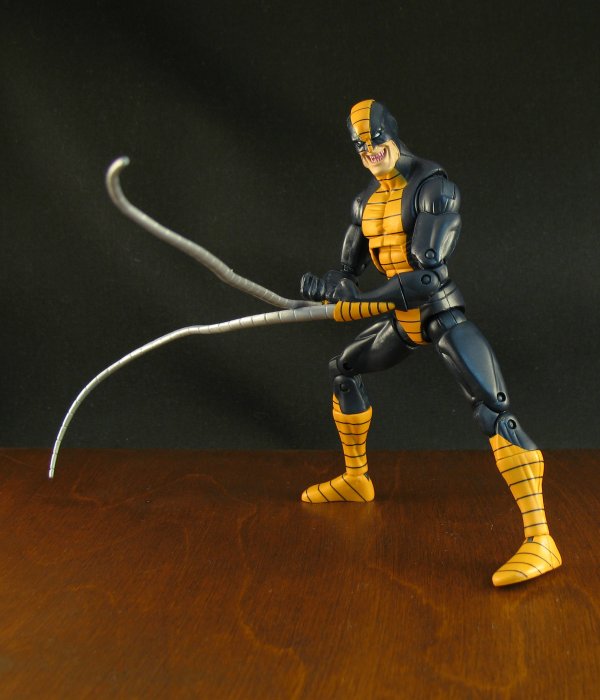 One particular oddity is his belt. Apparently Constrictor has a belt on this body. I don’t know why since he’s not wearing pants. Not even velvet pants. I’m not sure why a guy bedecked from head to toe in spandex would need a belt, but apparently Hasbro thought that he needed a belt. The beltless crotch must have been in use elsewhere. So Constrictor has to suffer the indignity of having a belt sort of painted over, which makes him a bit like those guys that wear black socks with their shorts. At least he’s not wearing suspenders also. There’s always that. 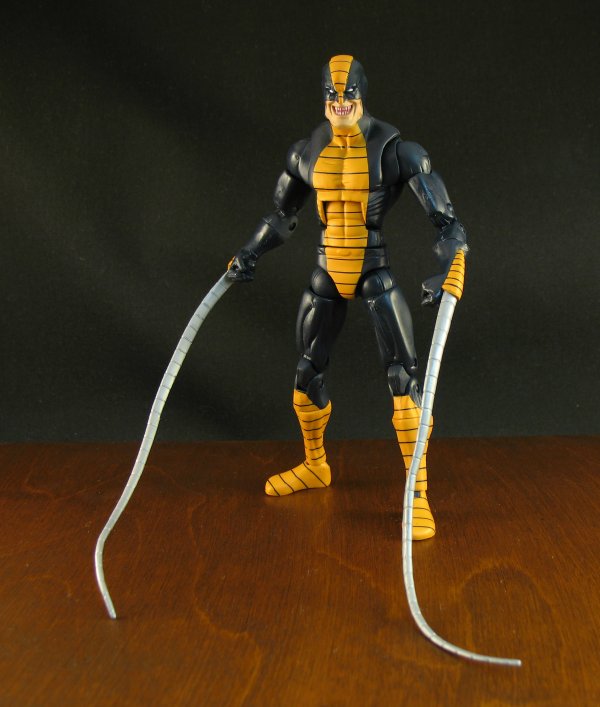 But he does have fists. You can’t take that away from him. And if you like the multi-optional posing ability of this extremely exhausted body, then you may not have any problems with him. I’m fairly ambivalent in that I can see many ways in which he could be better, but then I hunch him over and wrap a coil around someone I’m a kid again, and all the adult anal-retentiveness flies out the window and I don’t care that he has fangs or a belt.

Even though he has fangs and a belt.

I’ll review Terrax and the rest when I can find them. Benty needs more toys.