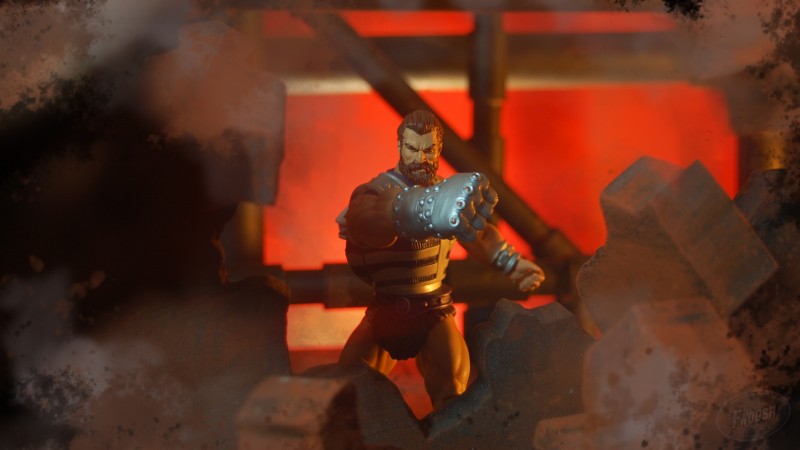 I am running behind on my MOTUC pictorial reviews, so if you haven’t seen enough of February’s subscription figure Fisto, click through for some pics and thoughts! 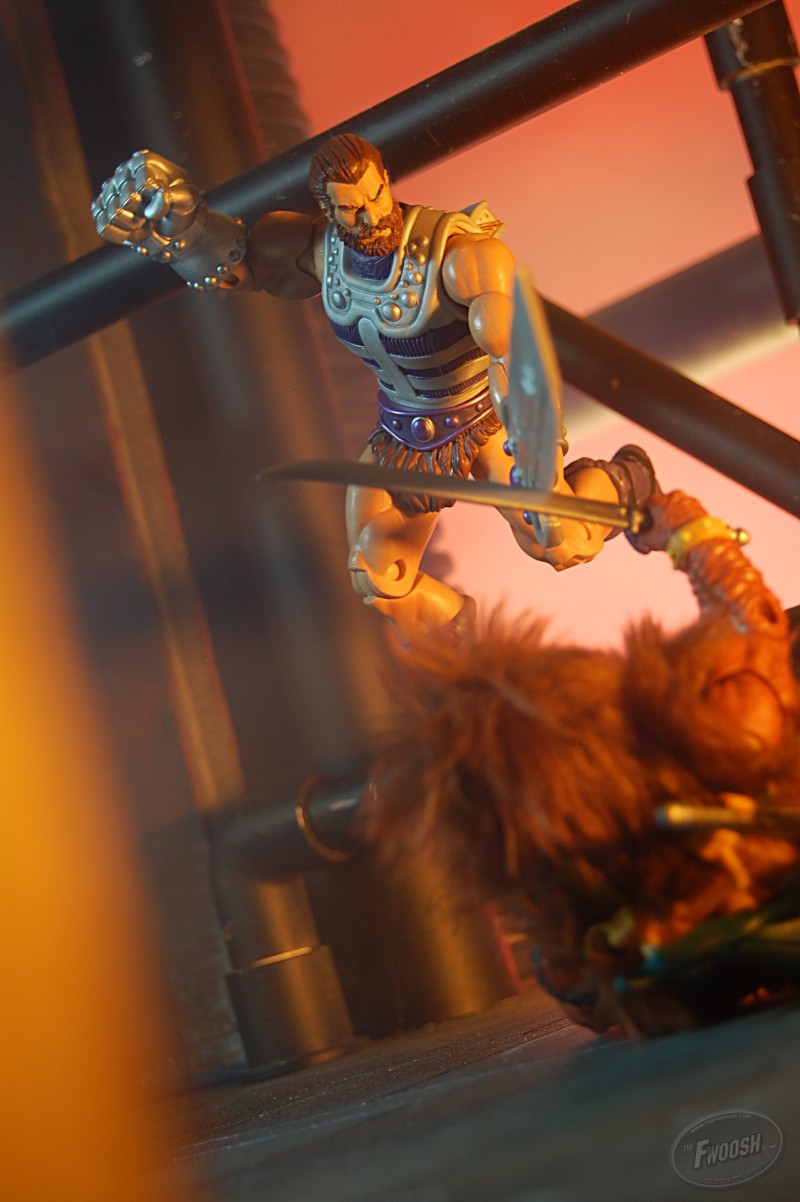 The older brother of Duncan™, Randor’s first Man-At-Arms®, Malcom served under King Miro™ during the Great Unrest but was wounded in battle and stricken with magical amnesia. Wandering through Eternia®, he settled in the Mystic Mountains in a mining settlement, unable to piece together how he lost his battalion. His life changed when the Snake Men™ attacked his town and he helped save the Masters of the Universe® from their trap. But in doing so, Malcom shattered his right hand. In gratitude, Duncan™ replaced it with a robotic strong arm. Now known as Fisto™, he has made up with his brother and fights as a heroic member of the Masters of the Universe® smashing evil with his giant knuckles! 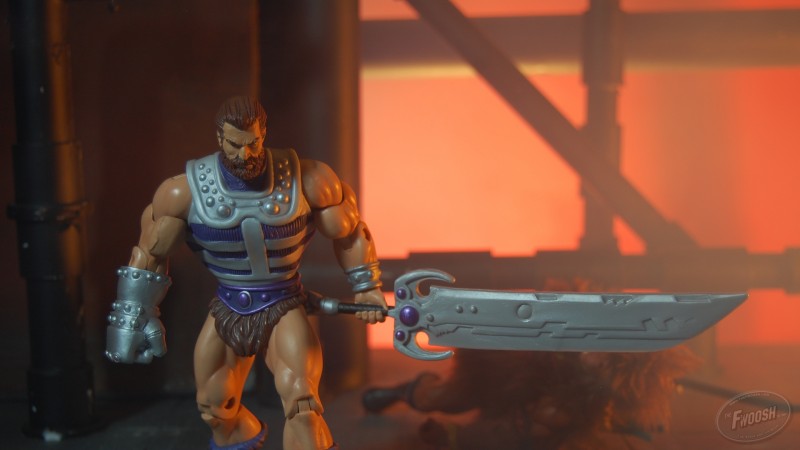 This bio seems to follow the events of the 2002 cartoon Fisto storyline, which is not unexpected, but I don’t really like the idea of the fist being a mechanical creation by Duncan.  It seems pretty cruel to give him this over-sized meat hook when we have seen that Duncan is fairly adept at creating normal sized cybernetic limbs as with Faker and Roboto.   I think I’d prefer it if the fist was some sort of magical weapon, but I don’t think that has ever been shown in any MOTUC lore, so I wouldn’t expect something like that in the bios.  I would have liked to have seen something referencing his days as a villain (as seen in the Filmation cartoon) as that adds an interesting angle to his character.  I also think this is probably one of the better ‘real’ names Mattel has come up with in MOTUC. 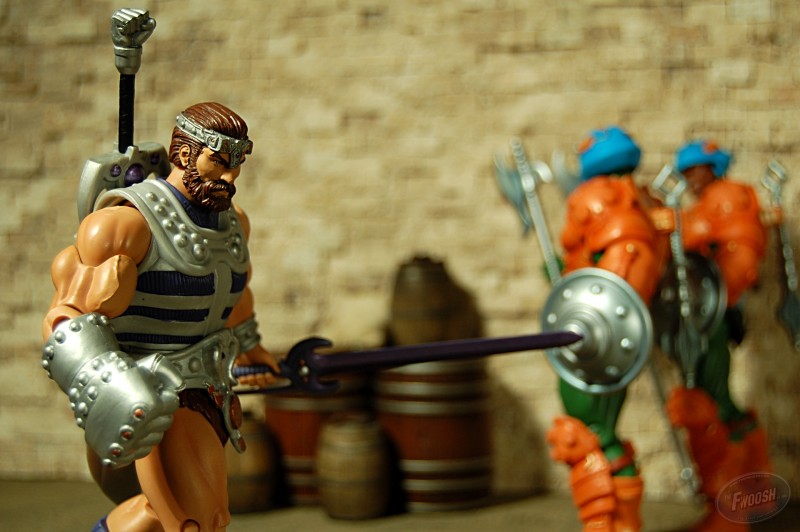 Fisto comes with quite a few accessories with a purple repaint of Tri-Klops’ sword, removable armor, a belt and alternate head inspired by his 2002 look and a gigantic new sword.  I love the repaint of the Tri-Klops sword.  There’s something satisfying to me to see iconic MOTU swords in a bunch of different colors.  I feel the same way about the power sword and He-Man’s shield and axe.  I can’t put my finger on why I love to see things like that, but I do. 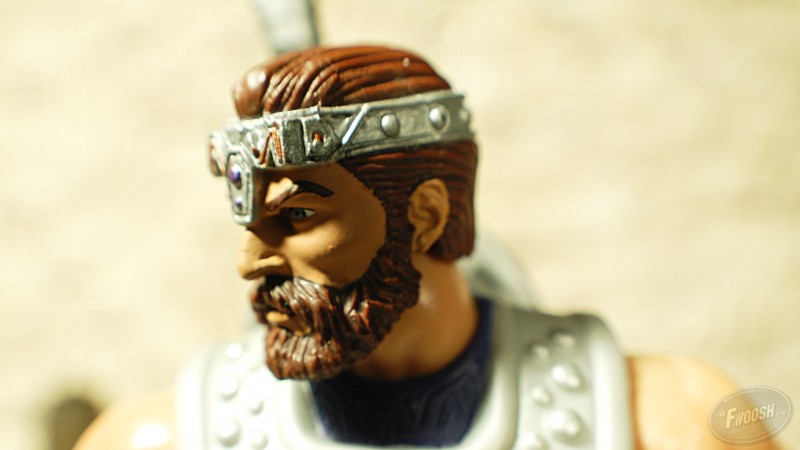 The 2002 head sculpt is basically the same as his standard head except he has a snazzy metal head band/crown.  The 2002 belt has an interesting ram motif and some large metal studs that tie in nicely with all the rivets on Fisto’s armor and fist.  The belt also has some interesting details on the backside with a flask, book and purse hanging from the back.  The belt and armor are both made of soft and pliable plastic and do not hinder articulation. 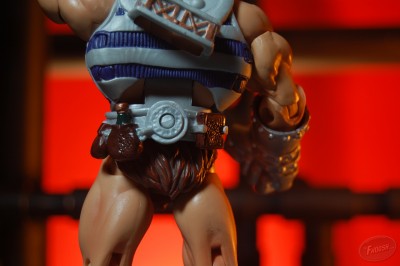 I dig little details like this and I like how they suggest character and story.  The supplies make me think Fisto is a guy who does a lot of walking in the wilds of Eternia, walking from place to place, meeting people, getting in adventures. 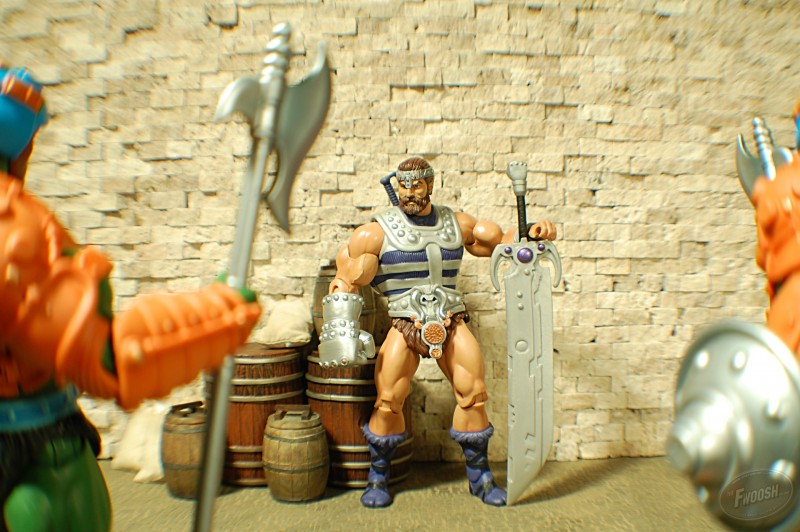 I think I prefer the classic look, but I’m glad they included the option for this design for fans of the 2002 series.  It does make me wonder how they will approach Jitsu.  His 2002 armor design is an even bigger departure from his classic look than Fisto’s.  I have a hard time imagining how they could get both looks in one figure like they did here. 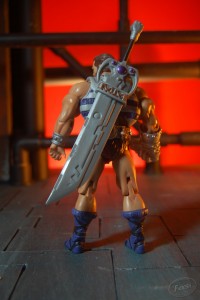 The new sword is a 2002 design that was never produced, so I’m sure 2002 fans are really excited to finally see this sword.  I think I prefer the purple sword, but this one is kinda fun in a ludicrous anime way, calling to mind Final Fantasy or G.U.T.S. characters, which doesn’t seem too out of place for a guy whose main gimmick is a giant fist.  The sword is made from a solid plastic and has some great looking techno details and a fist on the pommel.  It’s pretty heavy and you have to be careful how you pose Fisto with it as it will twist his wrist articulation if not balanced properly.  They did sculpt a large sword holder onto his armor, which is great as I always like it when my figures can holster their weapons. 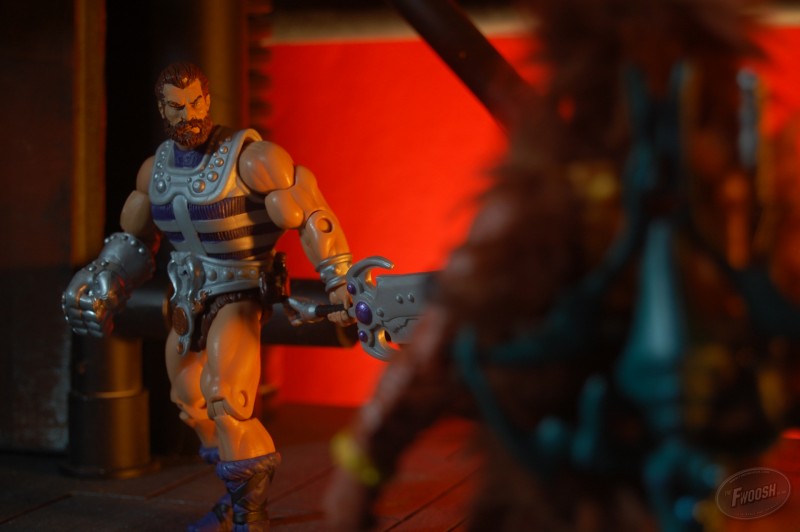 Fisto uses the standard MOTU body with new armor, accessories, heads, fist and bicep.  That’s right, the 4H sculpted a brand new, heftier right bicep to show the effect of carting around that massive fist all the time.  That’s a great little detail they could have completely got away with not doing which makes it all the more impressive and cool to me that it’s included. 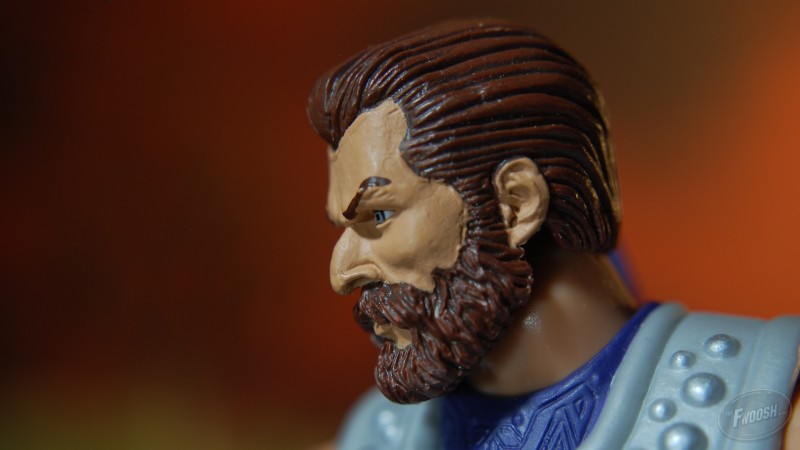 The head sculpt is really great and rugged.  It’s a bit of a departure from Fisto’s vintage look, as his face is a little thinner and less round, but I’m fine with that as his vintage figure looked a bit wide-eyed and his forehead seemed unusually short to me.  This version makes Fisto look like a really intense, tough guy – perfect for an Eternian warrior and veteran of war.  He’s a bad ass, and that comes through loud and clear on this sculpt. 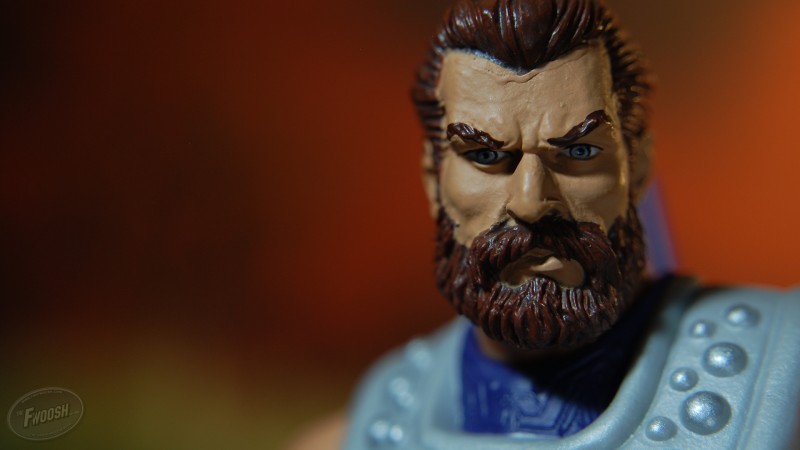 The fist is vintage styled in detail and it’s proportions.  I love how the details of the design are all straight from the vintage figure, but the sharper sculpt makes them pop and look so much more cool.  I also like that they incorporated a bit of etched detail designs into Fisto’s collar.  It’s a tiny bit of detail that adds some more visual interest to the armor. 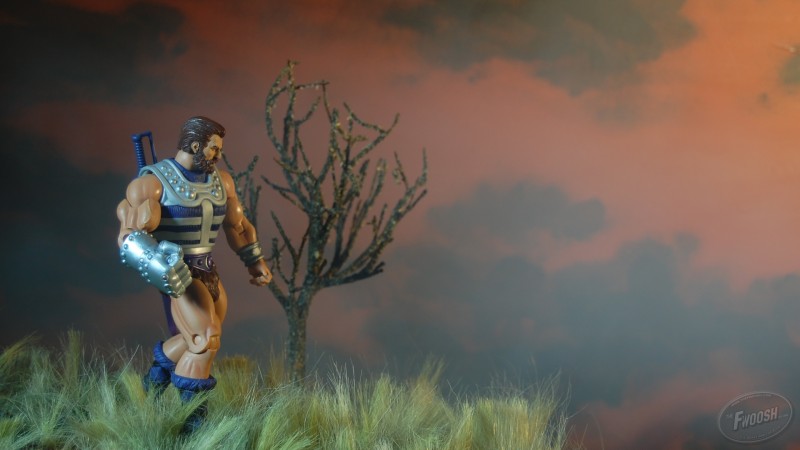 It’s not so bad for my taste, but it’s also not perfect and that does activate my action figure OCD a bit.  It’s not something I noticed right away and had already thrown away the packaging when I did, so I don’t think I could return it even if I did trust digital river to send me a new one.  If any customizers end up with extra armor they don’t need, I’d be interested in buying it off you.  Or if you felt like you wanted to donate it to me, I’d gladly accept that too.  Heh.

Fisto sports the standard MOTUC articulation and his loincloth and extra belt do not hinder the leg movement more than usual for these figures.  The joints do seem tighter than normal especially at the ankles, which is great for holding poses. 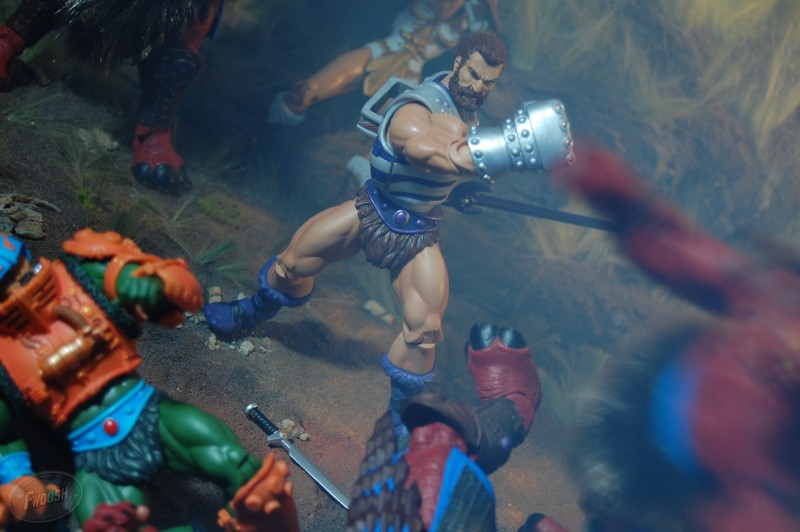 Paint is good on this figure, but I can pick a few nits here and there.  The eyebrows don’t quite follow the sculpt of the eyebrow on my vintage head sculpt, but the eyes themselves are perfection – very lifelike and intense.  Sometimes eye paint jobs can have a bit of dead-eye, far-away look, but not this guy. 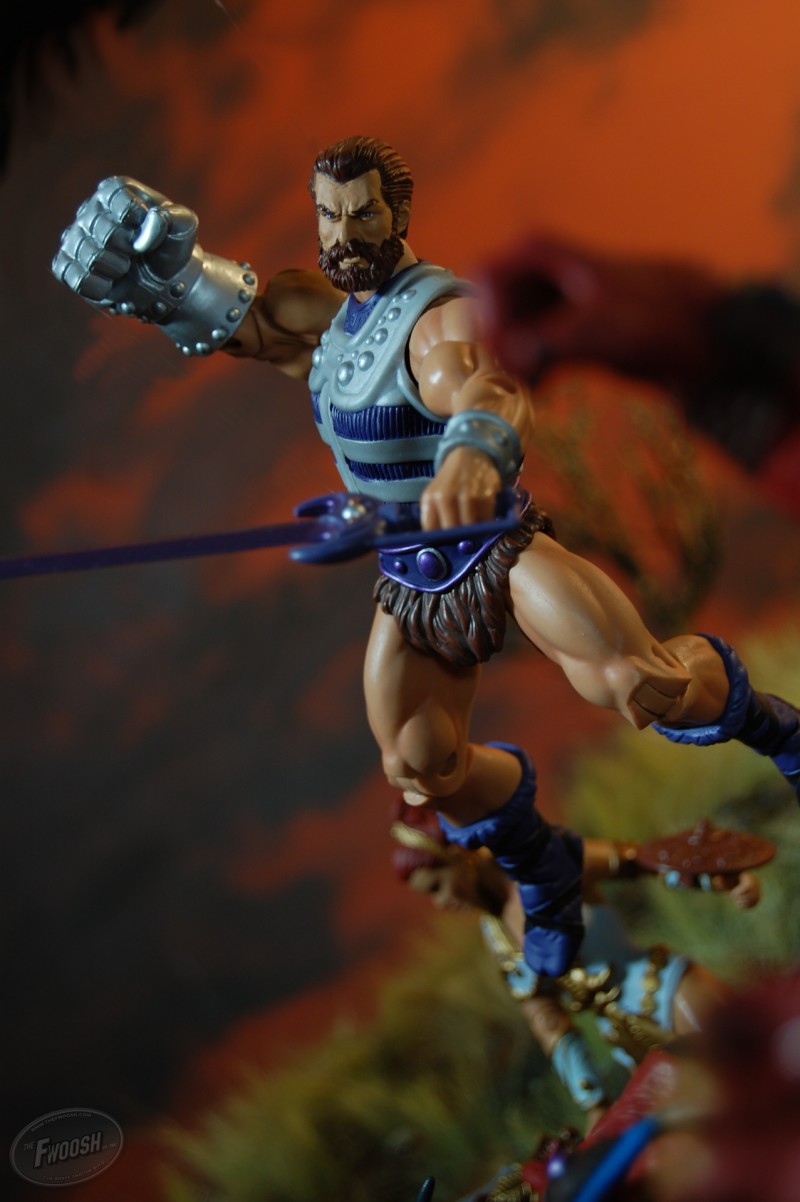 There is a bit of raised paint slop right around the hairline of my figure that I’m noticing just now looking at the photographs that fortunately isn’t noticeable in person.  I do like the subtle muscle shading they used here and the metallic paint on the fist itself is nice and shiny. 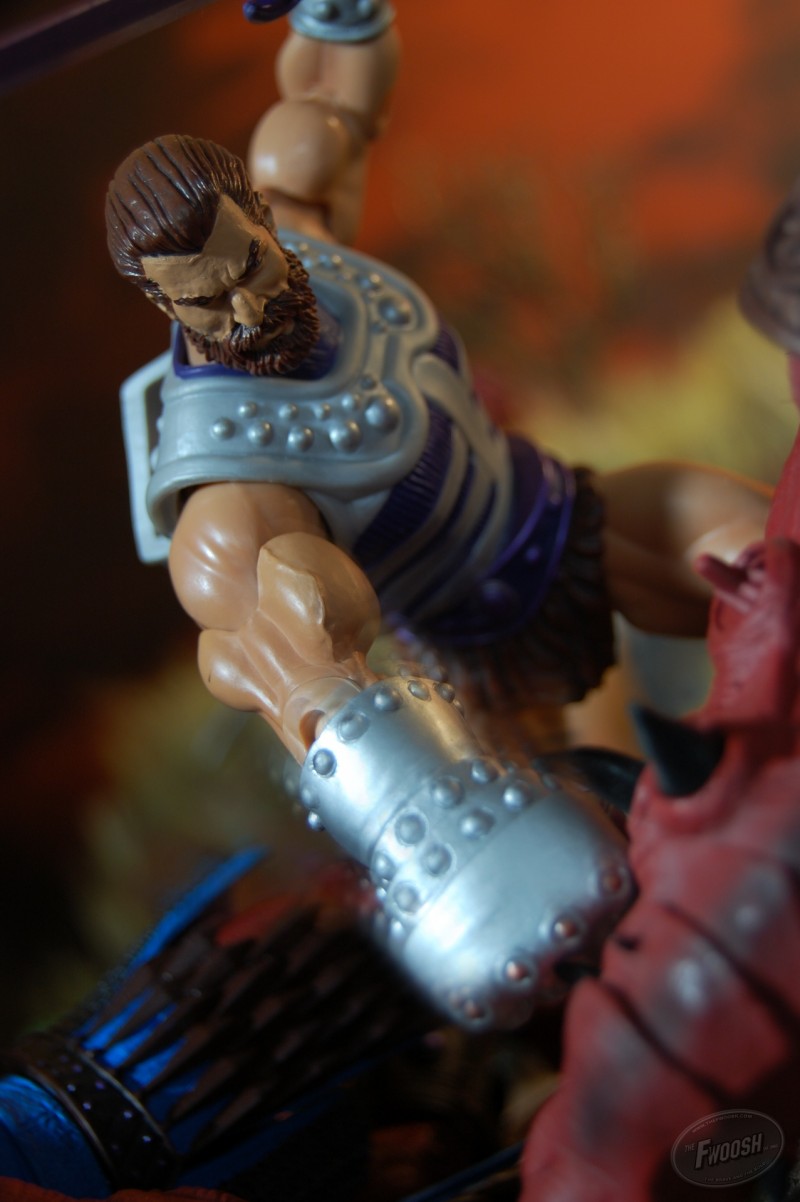 Fisto is not a character I had growing up, but I do have some nostalgia for the guy as I played with the figure at friend’s homes.  He wasn’t a character I was hotly anticipating in MOTUC, but he did turn out pretty spectacular. 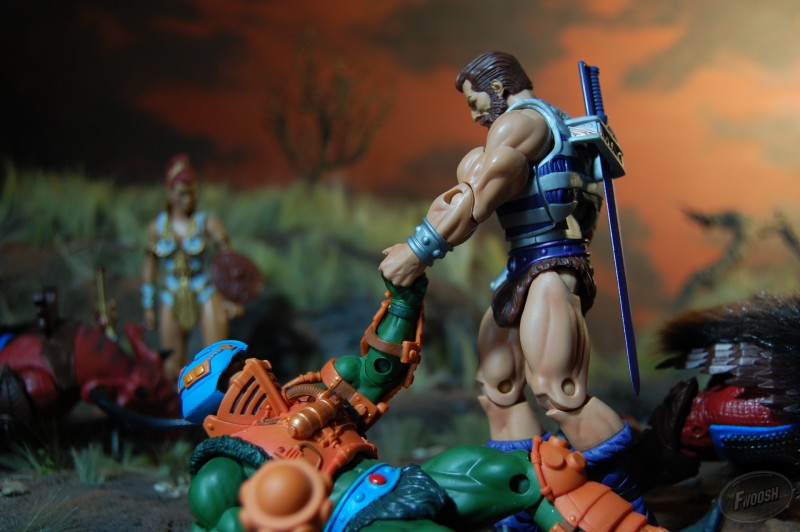 He comes with a ton of great stuff, but also looks fantastic on the shelf with no accessories at all.  I love how cool this figure came out and it’s definitely sparked my interest in this character more than ever before.  Here’s hoping for Jitsu sooner rather than later! 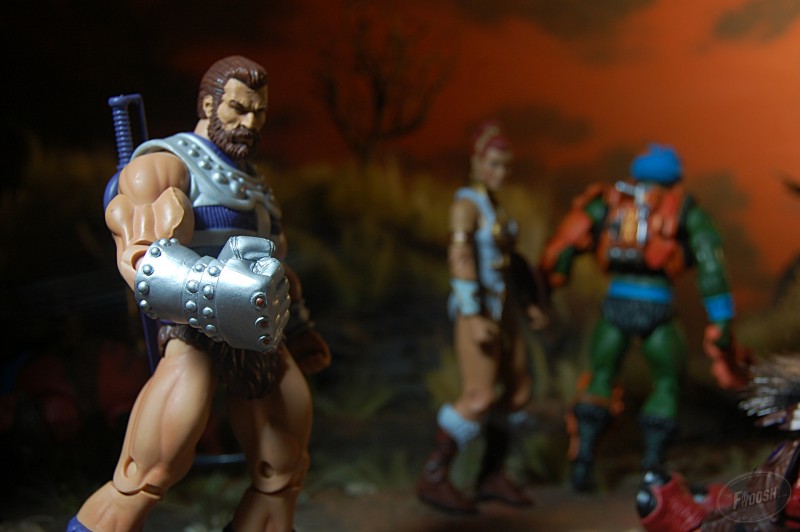