This is it, dudes. This is the final DC Multiverse assortment from Mattel. As of 2020, they will no longer be in the DC Comics action figure collector space, and after being with this line, and its predecessors DC Super Heroes, DC Universe Classics, etc., that accounts for more than a decade of collecting. I am pretty sad about this, to be honest, but this new Killer Croc Collect and Connect series is a pretty strong one to go out on, so that is good news.

As I am sure you are aware, the DC Multiverse iteration of the Mattel six-inch run has had a stronger focus on some of the key characters, their surrounding “families,” and media past the comics themselves (hence, the Multiverse tag). This last series does carry a bit of that multi-media presence with it, but for the most part, this is a comic-based wave. It makes sense that, in the midst of celebrating Batman’s 80th anniversary, this series is mostly Bat-related, but it gives us a chance to get a few updates of characters who have been in the line before, but in a couple of cases, some guys are making their first appearance in the line here at the end of all things. I will say it is a bit strange that Bruce Wayne himself  is not present at this party, but that might be about the most Bruce Wayne thing ever.

I have split the look at this series into two parts, so I am covering off three today, and I will be back later this week to get a look at the other three figures, plus the insanely impressive Collect and Connect.

Tim Drake is back in the line, this time looking a bit older, carrying more articulation, and putting “Red” into the focus of things. The original DCUC Tim Drake has stood in my collection since he was released way back in series three, but this is a good update and an interesting looking different costume, so it warrants a new version for sure. The red, green, and yellow classic costume color palette is strong here, but there is enough black in it to balance it out and give it a modern feeling. The figure features swappable hands and well as Tim’s patented staff, so while that isn’t the most accessories in terms of piece count in the assortment, you do get the essentials.

The base body matches the updates they have been doing in the Multiverse line as of late, but I find that the proportions fit Tim much better than say, Bruce, so this is actually a good look for him. The figure moves well for the most part, and I always appreciate it when those forward-facing rocker ankles are present, so finding several iconic Robin poses is not challenging.

Whoa! Guys, I don’t know how long we have been asking for this dude, but I am positive it has been the better part of a decade. Boom! Here he is, making it in just under the wire, and rather timely, too, for a KGB-themed villain. Over the years, Mattel has done a good job our rounding out the Batman Rogues Gallery (he also ties in well with Katana for the Suicide Squad), and KGBEast is a very welcome entry to that space, and I love the oddball and more esoteric quality he brings. This is what I would call a modern version, to be sure, but the fact that Mattel used the design of the MOTU Classics base body for this guy means they did his design and build justice in production, because this guy is wide, just like he should be. From a quality and final product standpoint, I find this guy to be the best of the series (or at least tied with the Collect and Connect), as the joints move well (but I think he lost his ab crunch, which is disappointing), and the plastic has a nice matte quality to it to cut down on the sheen. The torso does split from the waist pretty easily, but I don’t know if that is intentional or not.

Appropriately the Beast is loaded up with weapons, and the accessories help supplement the one grafted to his arm, or stand on their own. Included are two small knives that can be stored in his boot sheaths, and one big knife that you can plug into his arm gun so that you have a gun with a knife attached to it. This is what we have been waiting for, people. Yeah, the concept and qualities of this figure push him to the top of the stack for me, and as fan of getting unique characters goes, there are few more unique than old Anatoli.

Okay, so KGBeast might be my favorite in terms of actual figure in this assortment, but in terms of character representation, Alfred runs away with that title, and in many wonderful ways. Holy man servants, Batman – the guy who is probably more crucial to the very existence of the Batman than anyone else (save Bruce, of course) is finally getting his due, and Mattel has given the guy his absolute due, even if it took over a decade. Sure, we have our Robins, and Nightwings, and Jokers, and Batgirls, and all the rest, but friggin’ ALFRED is the true ally, and now he is finally here, and can fit into many different ages and media representations.

Yep, the loyal butler comes outfitted in classic butler’s garb, and carries with him mundane objects such as a glass of water, a discarded Bat-cowl, and the proverbial silver platter. EXCITING, right? Well, actually it kind of is, you know? I mean, I want an iconic version of Alfred on my shelf doing the things that Alfred does. So unless they were going to be able to include a giant Bat Computer for him to man for Master Wayne, this is a great representation of that. I mean, his hands and wrist articulation were even designed to hold that platter perfectly, so very good. The big plus up is that there is something for just about everyone in this release because of the multiple heads that are included. Yeppers, I have my comic-based version, but there is also a ‘60s Batman show version, and the ’89 film version as well and those two heads alone cover so much Alfred that has not been done yet, it is almost too good. Yeah, the 60s version is going to be a bit tall to fit into your previous Mattel collection, but the Michael Gough head is just the tops. I have one of these now, and I am already looking for multiples because I need them for sure.

This new series is a nice way to end our run of the Mattel DC action figure lines. Sure, there are TONS more characters I would like to see, but getting a new Robin, KGBeast, and Alfred is really, really nice, and those last two quite important to my collection. I will be back later this week to cover off the rest of the assortment, but in the meantime, you can get your set at Big Bad Toy Store.

*Thanks to the team at Mattel for sending along these samples for our feature, we appreciate it as always. 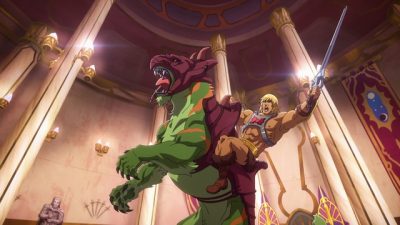 Review – Masters of the Universe: Revelation