I received the latest wave of Overwatch Ultimates from Hasbrotoyshop last week, so today we are going to take a look at cyborg cowboy McCree.

McCree comes in the now familiar white box with a large bubble that shows off the figure and striking bit of artwork along the side.

He comes with two extra hands, three removeable flash bang bombs, a gun and a blast effect for the gun.

The gun is pretty fun and sculpted with sharp detail. It’s got a classic six-shooter profile, but it’s very exaggerated in size and includes a spur in the handle for extra cowboy cred.

The gun fits well in the included holster and the soft plasic blast effect can plug into the barrel. Both pieces are somewhat soft, so it can be a little fiddly to get the blast effect in there.

One of the right hands holds the gun well and the other seems to be sculpted in order to hold the hat brim or perhaps a cigar. It takes a little bit of doing to get his hand up in the right spot on the hat since the elbow gets only a 90 degree bend, but it looks pretty cool.

The left cyborg arm has one hand sculpted for holding things and it works well with the flash bang bombs that peg onto the belt. The front facing bomb can fall off easily when posing the legs, so I’d look out for that.

The other left hand is sculpted flat, like a karate chop and it looks like it’s meant to indicate McCree fanning the hammer of the pistol for old-school cowboy movie rapid fire shooting.

The figure is a good likeness for the proportions and detail of the game model. His head seems a little small to me, but it’s hard to say definitively since proportions on the art for this game is fairly exaggerated.

I would say that it’s a bummer he doesn’t have a cigar in his mouth since that seems to be his default look, but I understand the societal forces preventing that one.

You can remove the poncho, but I found I had to heat and pop the head in order to do so. He looks pretty plain without the poncho, so I don’t think I’ll be doing that often. I do like how soft the piece is and it doesn’t really hinder movement.

The articulation moves well for the most part, though I would have liked a bit more elbow range for posing. The ankles are also a little useless. The swivel peg goes into the leg, so instead of getting that side to side foot movement you get from a peg inserted diagonally into the foot, you just get a spin. The ankle hinge utility is limited by the massive pants, but that’s understandable. Combined with the curved nature of his boots, it can be challenging to balance McCree.

Paint is good with shiny metallics on the armor and cyborg parts and a nice matte finish for the clothes. The detail on the poncho is also pretty cool. I would say it was better than good if they hadn’t just skipped all the blue glowing bits of his outfit from the game, which is kind of a shame because I think the blue would jazz up the color scheme a bit.

Overall I like this figure quite a bit. I am a bit prejudiced towards the figure just because I really like cowboy stuff and the anime flavored cyborg man with no name cowboy is hitting a lot of the right genre buttons for me. Some tweaks to articulation would have put this guy over the top for me. 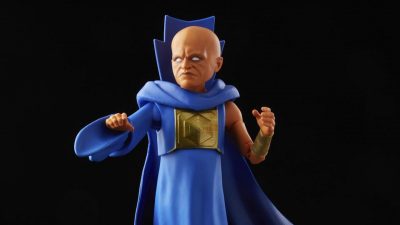