The twentieth anniversary of Beast Wars may have passed in 2016, but thankfully Takara is still slowly extending the celebration well into 2017 with the recent release of Masterpiece Cheetor and, if the rumors are true, the forthcoming Masterpiece Dinobot. Beast Wars occupies an increasingly curious spot in Transformers history because it’s often regarded as the series that saved the brand from oblivion after the failed attempt at “Generation 2” went nowhere. Beast Wars was a calculated risk that reinvigorated the Transformers brand and made it special again for the kids of the ’90s. Beast Wars has an incredibly dedicated following, despite more than a few “G1 purists” wanting nothing to do with it. And I get that. I was one of those people until I gave it a chance. Now it’s my absolute favorite Transformers era of them all, and adding a second Beast Wars Masterpiece figure to my collection could not make me happier.

So let’s take a closer look at Masterpiece Cheetor!

Cheetor’s season 1 appearance has suffered more than most Beast Wars characters in terms of getting the shaft in the action figure department. This version of the character has never had a good, quality figure, and even attempts at an update, like the Universe figure a few years ago, have been spectacular failures. His original Beast Wars figure has a wonky charm to it, but it was still a far cry from the design we were seeing in the series. Amazingly, Takara has given us what could be the last Beast Wars season 1 Cheetor figure we may ever need to purchase. It’s not 100 percent perfect, but it’s darn close, and that alone makes it infinitely more satisfying than any attempt that came before.

The packaging is the familiar Masterpiece box, but since this is a Beast Wars release, that tell-tale green “beast eye” serves as the figure’s backdrop on the front. The design is clean, sharp, and awesome. The back of the box does a nice job of displaying all that’s included, and they somehow make it seem way more than what you actually get. Takara does a nice job of making each release look “exciting,” and Cheetor’s packaging design is no exception.

Right off the bat I’ll say Cheetor’s ‘bot mode is the stronger of the two modes. His ‘bot mode is about as on-model perfect to what we saw on screen as we could ever hope to get in plastic. This figure nails the character’s robot look as perfectly as I could have hoped. And that isn’t hyperbole, either. This really looks as though Cheetor stepped right off the screen. The sculpt is beautifully done; the colors, particularly the metallic blue, is beautiful and complements the yellow of the figure nicely.  Yes, there is a little kibble hanging off him, like the cheetah legs on his back, but that’s how he looked on the show, so there’s really nothing to complain about here.

Cheetor comes with three options for face plates. They swap out easily and attach securely, but the differences in expression are a bit on the subtle side, so the differences are only clearly discernible when you’re looking at him up close. For me, it makes very little difference which he’s outfitted with. I’m not sure including these options was really worth the trouble, but I guess getting them is better than … not getting them? Like I said, unless you’re looking at them right up close, it’s tough to tell the difference between them.

Like the original Beast Wars figure, his weapons integrate into his beast mode. His primary pistol comes from the stomach of his beast mode, and it really looks like a stomach with a cannon sticking out of it. The larger rifle is a little awkward in its design, as it comes from the cheetah’s lower back and tail, but it works as a second weapon just fine. The sculpt and paint of the “stomach pistol” are fantastic and this will definitely be his default weapon for me. The rifle is a little awkward in terms of his holding it, so it will likely be stored elsewhere if I decide to keep him in ‘bot mode on my shelf. 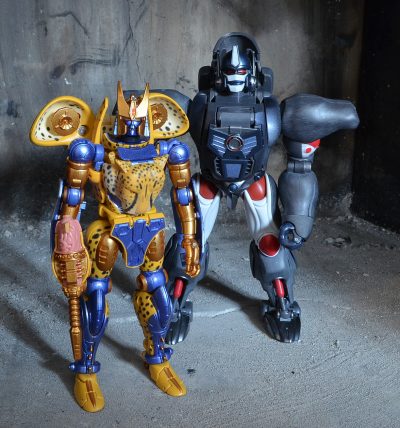 We ‘re off to a slow start with the Masterpiece Beast Wars line, but even having just Optimus Primal and Cheetor together is so gratifying. Two figures in and this is already starting to bee like a “collection,” so Dinobot can’t get here soon enough.

His transformation to and from his beast mode I find to be a little frustrating and irritating. It’s a remarkable feat of engineering to take that ‘bot mode and turn it into a cheetah that resembles his on-screen model so closely, but getting all the parts to fit together perfectly takes some finesse at times. 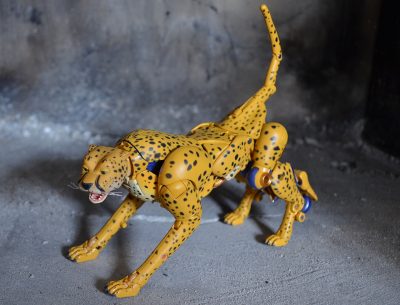 Cheetor’s beast mode is an admirable attempt at capturing his on-screen look as a cheetah, and it’s certainly way better than previous attempts, but it’s still not as satisfying as his ‘bot mode. It falls short for the same reason Optimus Primal’s beast mode did, and that’s the fact that too much of the robot bits are visible, so that sort of breaks the illusion. The proportions are there, and the basic look is pretty much there, but it’s not as fluid as I’d like from a Masterpiece release. I mean, I have no idea what they could have done differently to make the robot mode as good as it is while simultaneously transforming into a perfect-looking plastic cheetah, so I’m inclined to believe the engineers who worked on this design did all they possibly could.

It does look darn good, though, and it’s only when viewed from the rear that the illusion is really compromised. His robot feet hanging off the backs of his legs bother me, but it’s not awful. And I find the placement of the rifle’s barrel questionable in this mode — look at the center pic just below the tail. I mean, really, Takara? THAT may be taking the attempt at realistic authenticity a little too far. But I did laugh when I noticed it. From now on, when in his beast mode, Cheetor’s tail stays down.

Like his robot mode, Cheetor comes with three options for cheetah heads, each sporting a different expression. The jaw is articulated on all three, which goes a long was in making his heads even more expressive than they already are. And all three have whiskers! Sure, they’re just a soft, clear plastic, but Takara definitely didn’t have to include this feature, so it’s so awesome that they did. I had no idea the whiskers were coming, so I must have missed them in early promo shots, but they were definitely a pleasant surprise for me when I first saw them. 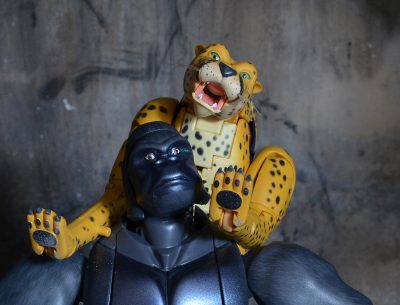 I’m so pumped to have Cheetor and Primal together. And since Takara tends to reuse molds to release repaints or other characters, I’m really hoping we’ll see a Tigatron down the line since he and Cheetor often used the same base bodies. At this point, I’ll take any Masterpiece Beast Wars character I can get just so I can help support the line because I’d love to eventually get every character from season 1. Hopefully some Predacons won’t be far off after Dinobot’s release, but for now, I’m really excited to be getting what figures we are.

I got my Cheetor from Hobby Link Japan, but he’s long since sold out. He can still be purchased from Big Bad Toy Store, however.