You know you’re getting old when Beast Wars is old enough to vote.

I remember the debut of the show almost as well as I remember seeing the original Transformers as a kid. This one occurring in a more distracted period of time — high school — it was a slow burn for me. 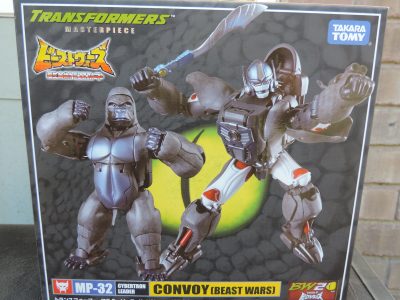 Actually, that’s letting it off light. Truth was, I hated it the first few times I saw it. CGI cartoons were very much the cat’s ass in the ’90s, and no teenager raised on Transformers would dream of missing a new computer-graphic enhanced Transformers TV show. That is, at least until you saw that there was not a single flat-nosed truck, cassette player, or F-15 Eagle anywhere to be found. Instead, you had monkeys, arachnids, and Pterosaurs. 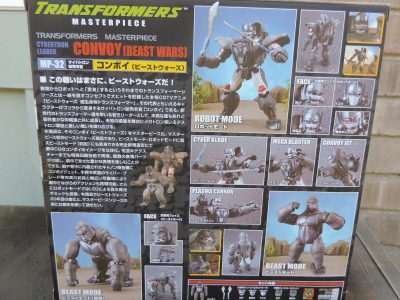 But, damned if the show didn’t have style. And heart. Soon, I began to soften on my resistance to ol’ Big Bot and his crew of misfits, and by the second season, Beast Wars had assumed it’s rightful place in the Transformers mythos as a proper successor to the original, with roots tied directly to those much-loved characters whose stories honestly never compared to that of these new guys. 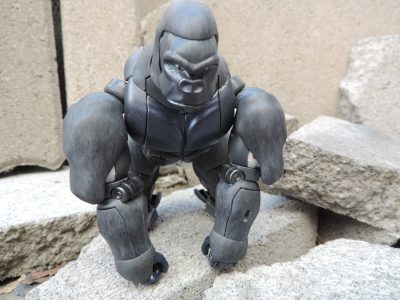 So when Masterpiece turned its high-priced eye toward Beast Wars, it was inevitable that we would see a new Optimus. And I have to say, after a dozen reissues and modular upgrades, as well as some unique sculpted versions here and there, I didn’t think I would need one.

And even after getting this handsome box open and getting my first look at the gorilla mode and the respectable accessories, I was still a little unsure. But as soon as I opened the clamshell and got him in hand, that resistance softened again.

One of the first things you may notice is how clean this gorilla mode is, especially from the front. An interesting decision not to sculpt hair-textures on his beast parts seemed a curious one at first, but the satin finish and light wash actually emulates the look really well, and it nails the CGI model.

The articulation is another significant improvement over previous Primals, with everything functional and effective, save for some gorilla knee joints. There is actually a hinge hidden on the hip joint that allows them to swing down further, helping with range of motion and getting those knuckle-dragging poses. The upper body does better than expected as well, especially with a very expressive neck joint. Once concern I had in initial pictures was that the gorilla shoulder pieces didn’t actually lock into place on his upper arms, but in-hand it’s clear this was done to keep the elbows unrestricted, and they do cover most of the robot forearms. Like most beast modes, there’s just no avoiding some exposed robot parts, and it’s certainly at its worst on the back of his legs, where his robot thighs ride. It doesn’t break the silhouette of the beast mode, but being as it is a Masterpiece figure, I had hoped there would have been a little less of the obvious stuff.

Now, the exchangeable face plates for the beast mode, though — that is very Masterpiece-esque. You can swap between standard, roaring, and smiling, the last one being almost always how I visualize the Maximal leader. All three look great on the figure. 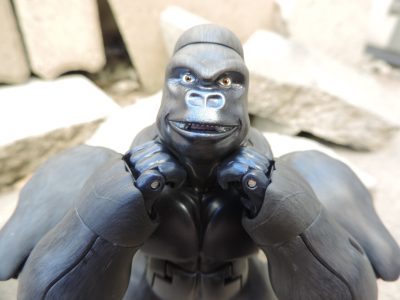 Getting him into robot mode is a little tricky at first, but there are definitely some similarities to other Primals that kind of helps it along, and, after a couple tries, it flows pretty well. 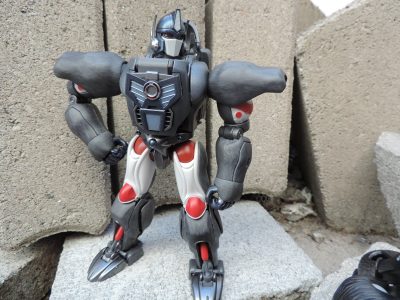 In robot mode, Primal is essentially the size of a big voyager figure, which is actually about where I want him. A bit smaller than the original, but a little taller and bulkier than the Transmetal version. He looks significantly powerful and imposing, and the metallic touches on the blues make for nice contrast with the washed gray-blacks. Articulation is just about right, with even an extra double knee joint possible if you use the transformation joints.

The interchangeable face plates come into play here as well, where you can go with the full face guard or three different slotted-mouth versions: straight, talking, and smirking. Obviously, any of the above look great and are very fitting of the character, but I actually prefer the face guard. Any of them will function with the light-up eye feature — just stop and grab yourself 2 LR44 (357) batteries first.

Like most of the modern Transformers weapons, they fit the slotted hands, and with the 3/1 articulated fingers, he grips them pretty well. There are also two shoulder cannons that you first encounter in transformation, and they also fold into his back when not in use. And of particular cool effect are his arm cannons, which lift out of the top of his forearms. They do take a little bit of work to open up, though. There is even a little fold out rocket pack for his occasional flying monkey action.

So, obviously, I’m pretty satisfied with this figure, but recommending it is a little tough. I picked mine up from HobbyLink Japan for a reasonable price, but I do still feel like I overpaid a little. While he is fairly complex and a little bigger than the Autobot cars, I don’t know if I see him as a significantly higher value than those generally are. I would have been more comfortable around the $75 range, I think. It will be tough to qualify that next year, though, when Cheetor comes out, and will get progressively tougher as we go. Like the character himself, I suspect this Primal’s true strength will be when he’s surrounded by his friends. And, well, that’s just Prime.