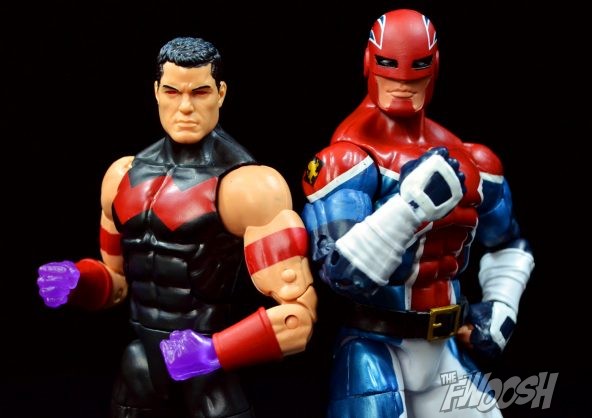 The hits just keep on coming in the Captain America: Civil War Legends assortments. We are up to wave three now, and since we already took a look at the Abomination Build-a-Figure, we are now ready to tear through the six figures needed to build him. Wonder Man and Captain Britain have been tied together in this assortment thanks to the nature of their powers, but these two actually have a long history in Marvel Legends, and now they are back to be two substantial and much-needed upgrades.

I know, I know, I have talked a lot about figure upgrades in Marvel Legends as of late because, frankly, we have been getting a lot of really nice updates to characters who have not had figures in years. Some of them have been more needed than others, but with all of the great parts available from Gentle Giant in the Marvel Legends library, I have been enjoying the redos just as much as the new characters. Wonder Man and Captain Britain, while updates, have been off of my shelf for so long it is like they are new to my collection, and that is a comment about just how dissatisfied I have always been with those old versions.

Let’s face it, while I always commended ToyBiz for making Wonder Mac and Captain Britain way back in the day, these two characters got stuck on one of the worst bases from that era, and it was not at all appropriate for either character. The body was very wide, but not all tall, and, if you remember, it was covered in this really weird stippling texture that had no place whatsoever on those figures. Black Panther was also stuck on that base, but he got his update a couple years ago, so now that Simon and Brian are here, I think I have expunged that body from my entire Marvel Legends history. Thank goodness.

For the first time ever, Wondy and Britain are not bound by common bases, and, really, that is a great thing. Captain Britain is a BIG dude, so putting him on the Hyperion base was a good call, and while Wonder Man is no shrimp himself, he is much more appropriate on the Grim Reaper base (you cannot escape your genetics!). So, right out of the gate, Hasbro gets props for choose more appropriate frames to build these guys, and while standing with the rest of the figures from this modern Marvel Legends age, they both look very much in place, as well as completely appropriate.

The right choice for bases becomes even more important when you realize that both of these blokes are mostly “nude” or “blank” bases, as their costumes do not require a lot of additional tooling to be fully realized. In fact, the bracers Wonder Man needs have been grabbed off of Namor, and I *think* Britain’s belt has been around before, but I could be wrong about that; it is pretty nondescript. Brain does get, I believe, some new boots, and while this is not my number one costume choice for him, it as actually grown on me since getting the figure, and it looks very nice, and probably a touch more practical than his classic duds. His new head sculpt is good too, but I think the thing I love about him the most is that he now stands above most other figures, just as he should. I just wish he had a few more Excalibur members to stand with him.

Wonder Man has a nice new head sculpt as well, which is always good, but seeing how that is the only piece used to make this figure, I kind of (and others REALLY) lament the fact Wonder Man was not made in his beloved “safari jacket,” but I find this standard (and easy to make) costume to be the most iconic for the character, so while we have seen it before, I will certainly take it. What is new here is that we get some power effects (rehashes), as well as standard and powered-up purple hands. I like this expression of his powers, and even though we had a fully-powered purple variant in the ToyBiz days, I think this is a reasonable way to be able to have a standard and powered Wonder Man without committing to a full variant. The red band of the right leg of this particular figure has some sloppiness to the lines, so I will take that as my chance to nitpick something, but this issue will obviously be different (or non-existent) from figure to figure.

It might seem like a cop-out, but I quite happy with getting these upgrades, and they will take their spots in my Marvel Legends collection, and I am ready for the next batch of redoes. I enjoy the balance of the new and newly made, and, along with Abomination, these guys represent the crop of re-ups for this wave. Sure, they are probably not the most exciting in terms of figures for this wave, but they are definitely my favorite in terms of characters, and they will get the most prominent spots in the display. I will take these kinds of releases in every wave, to be honest, and I think Hasbro has found a very good system to balance their waves. Wonder Man and Captain Britain are great characters, and they have finally gotten their due with great Legends figures. 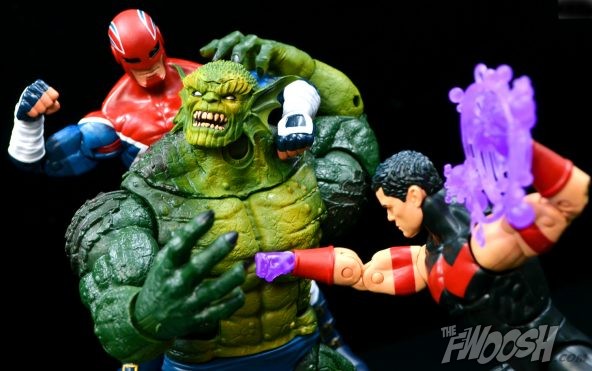 We will be back soon with a look at two more figures from the Abomination series.