It took some sleuthing but I think we have this mystery solved. I think.

Last night I posted an article about a knock-off Iron Man Mark 42. The sculpt is nice, the proportions are great, the size is more pleasing in the 1:12 scale. I ordered one. Hell, I also nabbed the Mark 43 version just for giggles. But I was informed through several outlets that this figure had been up on eBay for a while. It was new to me, what can a guy do? I was also told that the proper term for the figure should be “counterfeit” which I can agree with. It’s using a license that the producer doesn’t own. Makes sense. In my defense I did say we should probably not call it a knock-off since we didn’t know the base figure.

But now I think we do. And if we’re right we can now officially call this a knock-off. A bootleg. Whatever charges your repulsors.

I woke up this morning to a message from Pabs asking if the figure in question is a bootleg of the Play Imaginative Super Alloy Iron Man Mark 42. After some quick pic Googling I delightfully agreed. And then I had to go to the daily grind for ten hours. So here I am again, looking at pics and trying to pick out all the little details. Let’s take a look and see if you agree.

First up, again, the knock-off Iron Man in question… 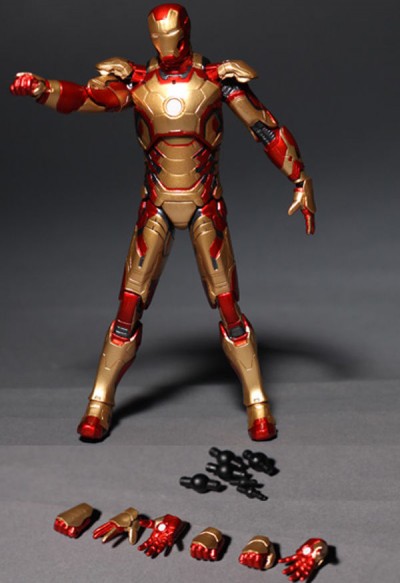 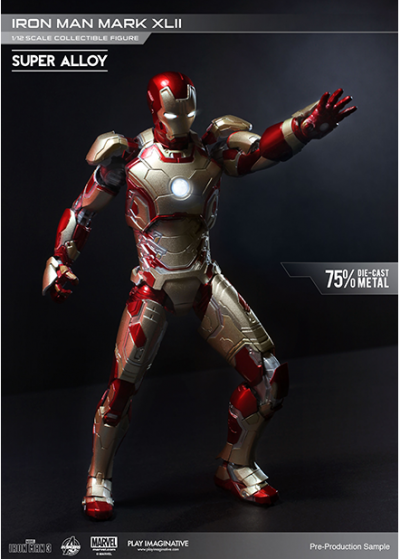 The KO seems to come with the same extra hands as the Super Alloy version, at least most of them…

All of the details seemingly match up. Even the paint lines up pretty closely, most noticeably on the red lines crossing the top and bottom of the abdomen.

The big difference is, of course, that the bootleg isn’t made of mostly metal and is missing the light up feature. And doesn’t look to have the removable parts. The Super Alloy Iron Man has damaged pieces that switch in and out with various parts. But sculpt-wise they are nearly identical.

Bootleg in the middle… 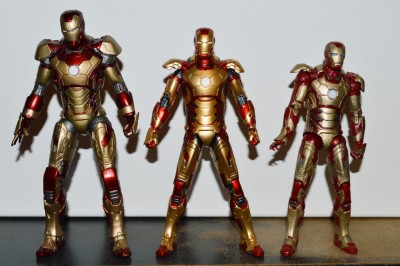 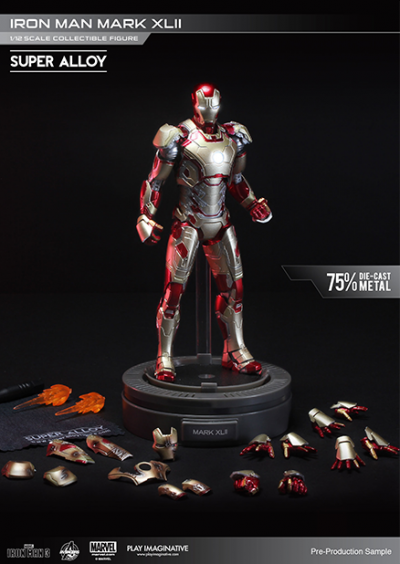 The articulation at the elbows seem to be different though, so maybe some of the internal workings changed to accommodate a cheaper price. We’ve seen this with bootlegs before, like the BAF Groot last year.

Also, Entertainment Earth and other places has the release date for the Super Alloy set for this month, so the molds are at a factory. If they even use molds for metal parts, I don’t know. But the close release of both of these can’t be a coincidence.

Oddly enough all this makes me want the Super Alloy even more. I love metal and if nothing else I would love to compare them in-hand.

Might we see bootlegs of other upcoming Play Imaginative figures in the future? Like War Machine or Iron Patriot?

Or even the Hammer Drones? I’ve seen their display at SDCC and they at one point planned to do every single version of the Iron Man armor. You can check out Matt’s pics from SDCC ’13 to get an idea.

If you’re going to pull the trigger on one of the KO Iron Mans on eBay, be sure the auction uses one of the pics I’ve posted here. If you followed my first article you know that some pics slowly disappeared. That’s because in my haste I accidentally mixed in some actual Marvel Select figures in there because they do look similar. This auction and this auction are the ones you’re looking for. And if you want the Mark 43, use this one.

Speaking of Marvel Select, while I as pouring over pics today I realized that the unmasked Tony Iron Man with Infinity Gauntlet from last night actually is just the Marvel Select repainted. Probably a custom. The head looks very, very similar to the 1:4 scale Super Alloy Iron Man though.

But like I said, 1:4 scale. I don’t know how easy it would be to shrink a head that size. And if you’re going through that much trouble you could just use the Hot Toys head, less shrinking. So really, who knows. It does look super nice.

Another bootleg that was pointed out to me is the Midas armor Iron Man. 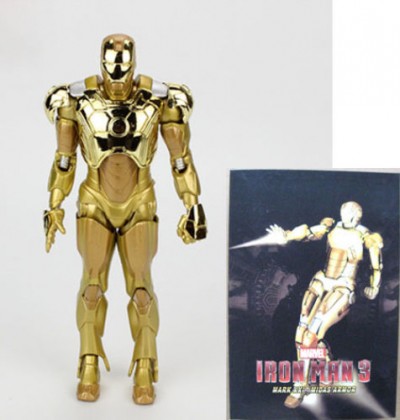 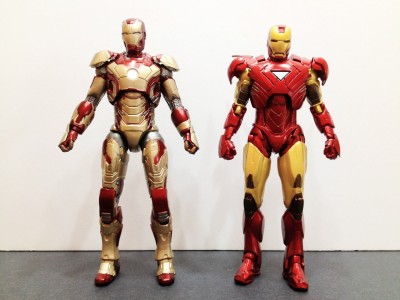 Well, except for the chest plate. It looks like the MK42 chest but it’s not the same as the MS MK42. Still, it does look nice and the colors are amazing. At first I thought it was all shiny gold but upon closer inspection there is a lot of paint going on here. Silver highlights, a mustard color, a lighter mustard, a little chrome, and some gold. Man I love some shiny paint.

Finally, as we (hopefully) close the book on one mystery, another opens. The case of the counterfeit Hulkbuster.

I absolutely have no clue where this figure came from but it’s cheap and it’s all over the overseas eBay. These can be had for anywhere from $10 and up. It looks pretty good even though articulation seems hindered and the helmet looks tall. And then there is the size. It’s listed as 6.7 inches, which isn’t huge at all. The Hasbro Hulkbuster will be coming in much bigger than this. But here’s some comparison shots with the Hasbro Avengers Hulk just to give a vague idea.

Not terrible, but I’d probably wait for the Hasbro version. Or one of the many version to choose from. Well, I’d wait if I hadn’t already bought one. I’m weak and a sucker for these odd kinds of things! And that’s what it will probably be, an oddity to keep over in the corner of the Iron Man display.

Be sure to look at all the pics in any auction you run across though, you might end up with this one… 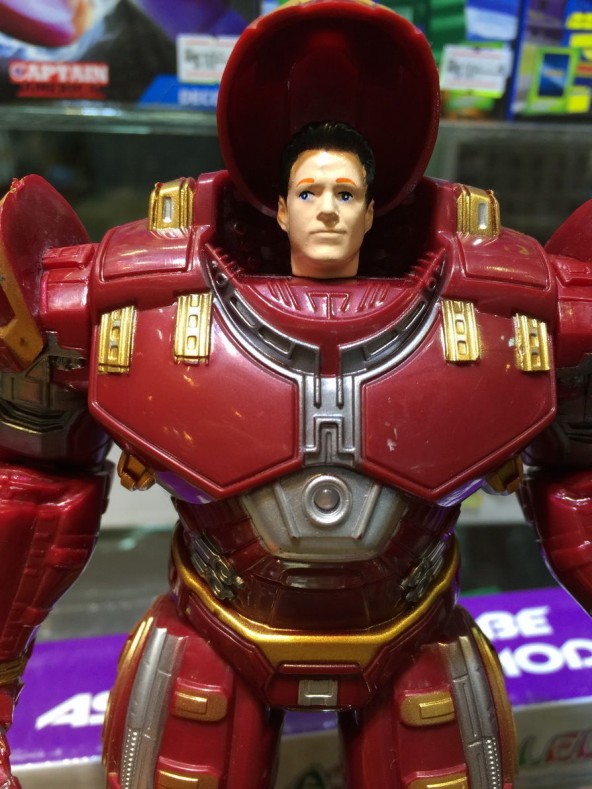