What do the Transformers, Doctor Who, and the Marvel Universe all have in common? This guy — Death’s Head. Created by Transformers UK scribe Simon Furman way back in 1987, Death’s Head has appeared in several wildly popular titles over the years and has starred in his own solo book as well — not bad for someone created as a “throwaway character” to fill out a story in an issue of Transformers UK.

Despite having a 27-year history and being part of some of the most popular pop-culture franchises ever, it wasn’t until now that a proper Death’s Head action figure has been available on the mass market. Let’s see if this guy was worth the wait!


Packaging is standard Marvel Infinite fare. It’s pretty dull, but it does showcase the figure nicely, and his colors pop like crazy against that drab backdrop. The back of the card gives us a brief bio, which would be especially useful for anyone not familiar with the character. I like how it stipulates that he “roams both space and time” because, at least to me, that keeps him tied to the Doctor Who universe. 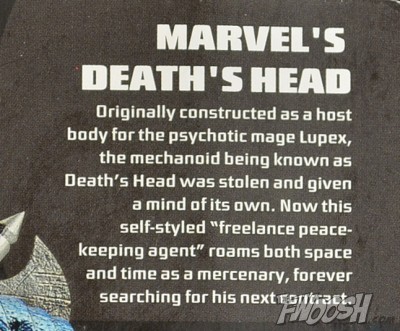 
He’s a gorgeous figure with very “heroic” colors. The blue armor and red cape make me think “Superman” immediately, but, thankfully, Death’s Head is no boy scout. Now, I think he’s built on the Marvel Universe Colossus body, but I can’t be sure since I no longer own a Colossus. It certainly looks as though it’s that body with a few newly tooled parts. It’s a good reuse if it is, with plenty of new parts to keep him from feeling like a simple repaint.
The head sculpt is aces. They really nailed it. His horns could be a little more “pointy,” but otherwise this is the character rendered in plastic. Well done, Hasbro.
For accessories, he comes with a mace, an axe, and a shield. All three can be held in his hands, and they can be stored on his back as well. I love them on his back because they give him a much more barbaric and menacing look. All three are made of a rather soft plastic, however, so it can be difficult to keep them in place at times, but if you can find that sweet spot, it looks pretty cool. 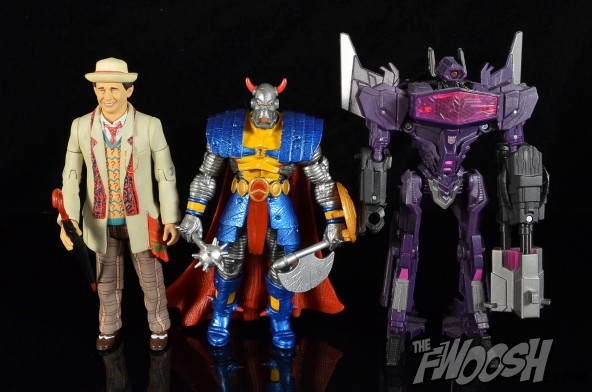 Since he’s in scale with the Marvel Universe line (3.75-inch scale), he’s not really in scale with Character Options Doctor Who figures (5-inch scale) or Hasbro’s Transformers figures (scale varies, but there’s no sweet spot). In the comics, Death’s Head was just as large as any of the Transformers, and in his Doctor Who appearances it was established that his size could shift, so it is possible to make it work if you really wanted to, but I have a hard time accepting a Death’s Head who’s shorter than the 7th Doctor.

Scale in the Doctor Who and Transformers UK comics: 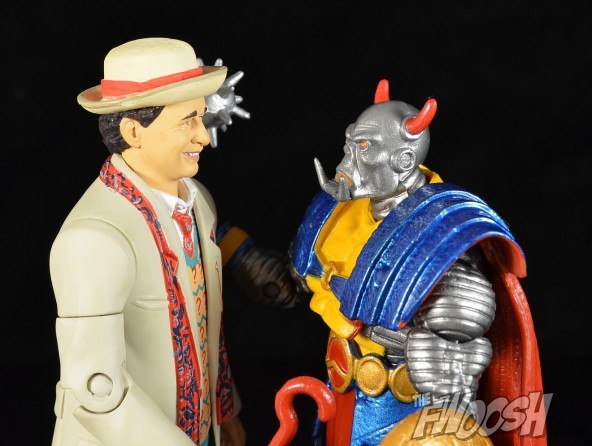 This just doesn’t really work for me. I want to believe it works, but… it doesn’t. I need a Marvel Legends-scaled Death’s Head.


He kinda-sorta works with the new legends class Bumblebee, but no one else, really. And he does tower over the average Marvel Universe male figure, so he works well in that collection. But after doing some digging through my collection, I did find some Transformers figures he does scale with nicely — the Revoltech Transformers. 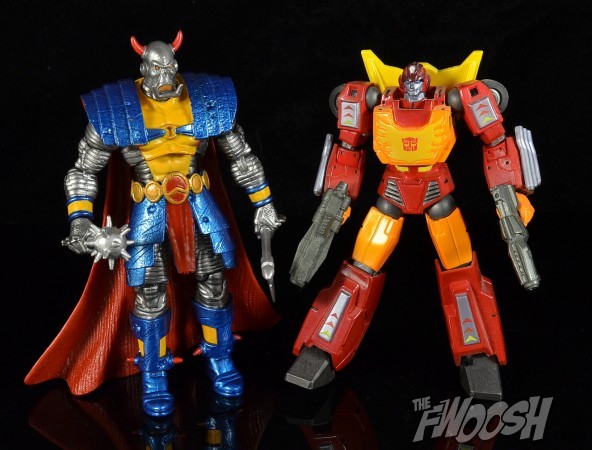 He looks downright perfect here with Revoltech’s Rodimus, so I think that’s where he’s going to be permanently displayed. It’s too bad that collection is so limited, though, because I’d love to be able to have him go toe-to-toe with Galvatron.

Regardless of where he fits and doesn’t fit, this is a Death’s Head figure, and the fact we got one at all is insanely cool. Hopefully the demand for this guy goes through the roof so Hasbro can recognize the fact that a 6-inch version would be wholly embraced across the board because the cross-pollination possibilities are vast. Doctor Who, Transformers, and Marvel fans would love to add a Death’s Head to their shelves, and while this one does work OK, a 6-inch would be perfect.

I got my figure from Amazon, but his wave should be hitting all the usual spots very soon.