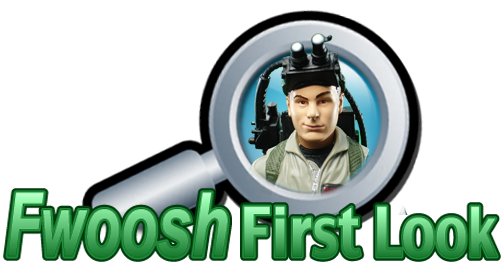 Winston, Winston, my dear Winston Zeddemore! Your time has finally come! Even after being a part of the Ghostbusters team for over 20 years, I am sure you have still been referred to as the “newbie” or “green horn” up until this very day. I know, it can be really hard to shake that “new guy” persona, but when you come into a small company with three founders that have been together since college, you will continue to be reminded that you have the least experience within the organization and they grunt and gopher tasks are still on your plate. Until now. Yep! Finally after decades of being a four man operation (plus a red-headed receptionist and a nerdy accountant) the Ghostbusters have finally decided to add a new member to their group – The Rookie!

What seems like will never be realized on screen (does ANYONE see a third movie happening at this point, especially without Pete?) continued on in the video game world a couple of years ago – a new Ghostbusters adventure! The Proton Packs were dusted off for a barrage of enemies, both old and new, for the gang of four to contend with. BUT… the task was so heavy that then boys needed a new recruit, so they went and drafted the Rookie into the ranks. Yes indeed, you might be a Ghostbuster now, but that does not mean anyone around the Fire House is going to bother to learn your name. 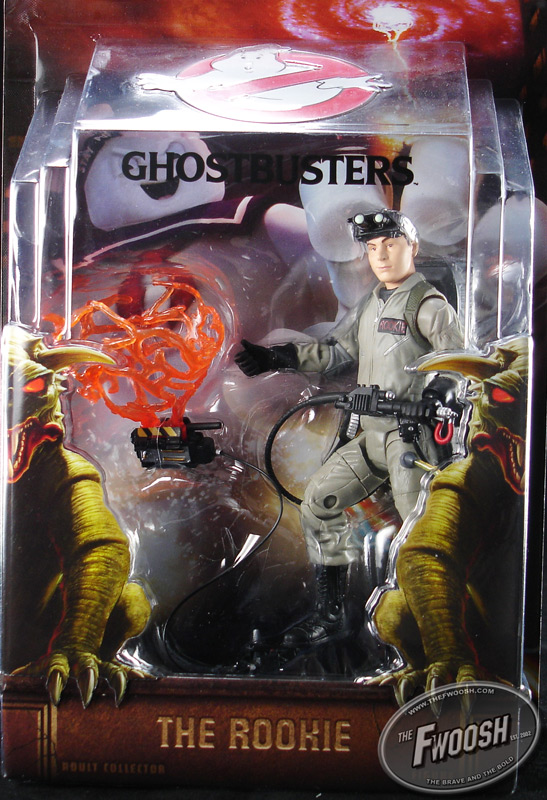 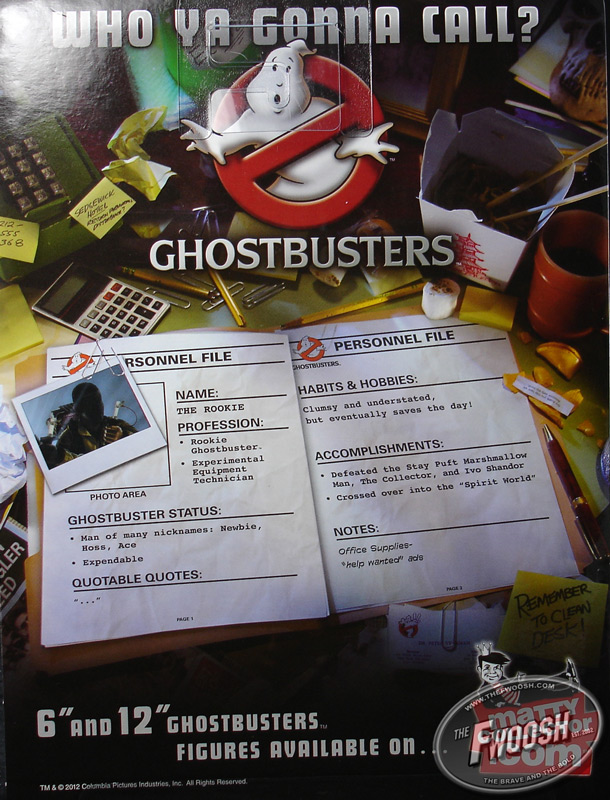 Okay, maybe I am exaggerating a bit with the anonymity of the Rookie, because that is the way that doctors Stantz, Venkman, Spengler and Zeddemore (yep, Winston went back to school) got you, yes YOU into the gray jumpsuit. The basis of the nextgen platform game that was released a few years ago was that you got to play as the Rookie and join the boys and ultimately save the day. I actually quite enjoyed the game (I have only ever played the Wii version), and while I was a bit dismayed that I never got to step into Bill Murray’s shabby boots, just being a part of the team was a lot of fun. Now Mattel has brought us a figure of our personal avatar into the ‘busting world in the form of their new Rookie figure. 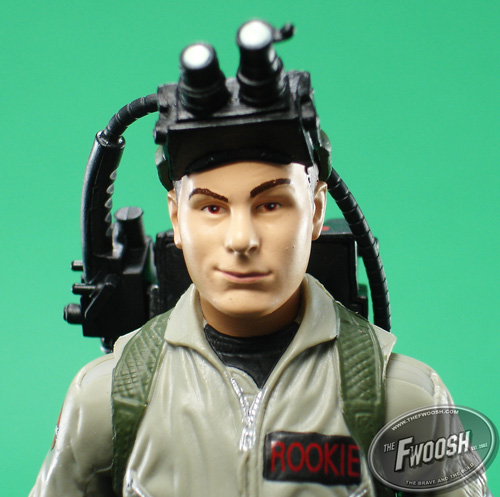 But for being a first time Ghostbuster, when you take into account some of the sculpting changes from the previous guys, the Rook actually has a lot of interesting things going for him. In fact, there are a few things about this figure that I like better than any of the figures, even if they are mostly small details. Upon first look it is easy to think that he is identical to the four main guys in terms of basic body reuse. In fact though, he has an all new PKE Meter and Ghost Trap that are attached to his belt. I have to say that these two little things actually go a long way in “filling up the corners” of the overall look of the figure. He just feels more equipped and ready to take on Gozer than the rest. I suppose this works from the perspective of making the new guy do all of the shlepping, but having this figure really makes me wish that some other guys matched in terms of busting implements. Ray, at least, seems like he would lug as much stuff with him as possible.

Other than the new belt and accessories, the Rookie does share most of his pieces with the previous guys. He has the boots and tucked in pant legs of Egon, Ray and Winston, but the gloved hands of Peter. I think this fits right along the lines of what most fans have been wanting for their figures of the former three, certainly Dr. Venkman should be the only one with his pants untucked from his boots. I know I have been speculating that this Rookie is the first one to join the team, but maybe he is actually one in a long list of guys that didn’t really make on the team. At any rate, he only get “ROOKIE” on the name plate. You have to earn a right to have a name in this game.

If I am not mistaken, this is actually the first time that we get to see the actual face of the Rookie character too; I don’t believe it was ever reveled in the game, which makes sense since you are supposed to be the Rookie. Please correct me if I am wrong about that. The face is fairly generic, but it is a fine look for the character. His features are fairly nondescript and his haircut is pretty ordinary. Since this is a generic character, I wonder if perhaps the look of this figure is modeled off of an member of the Ghostbusters team at Mattel, or perhaps someone at Sony. Either way, it is functional but I cannot tell if it is a *touch* too big, or if the previous heads are a little small. What do you think? 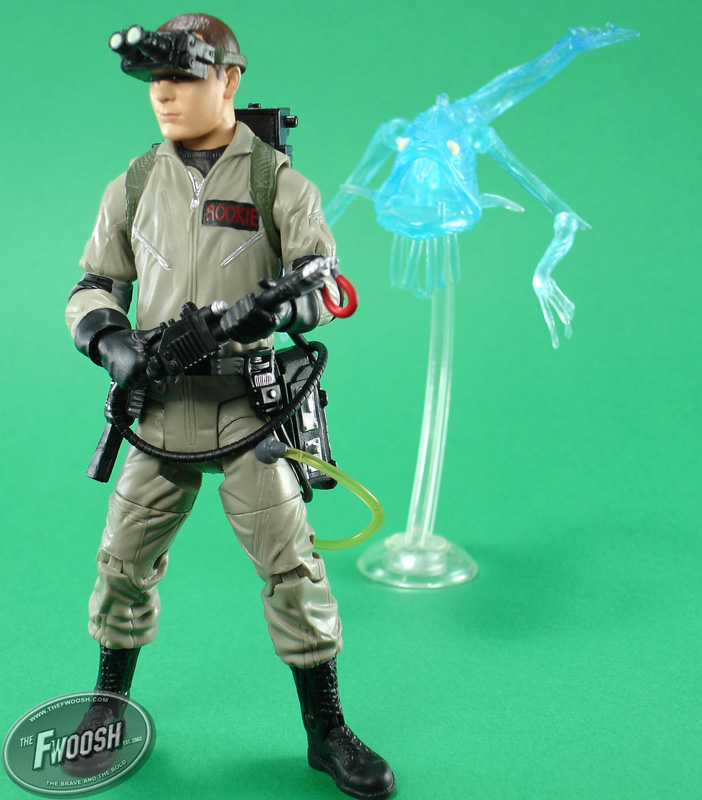 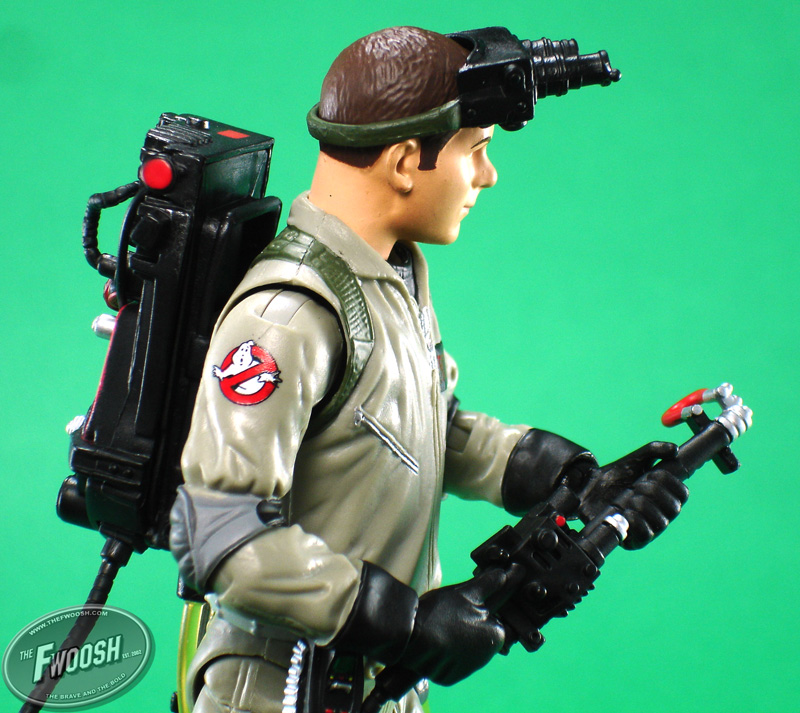 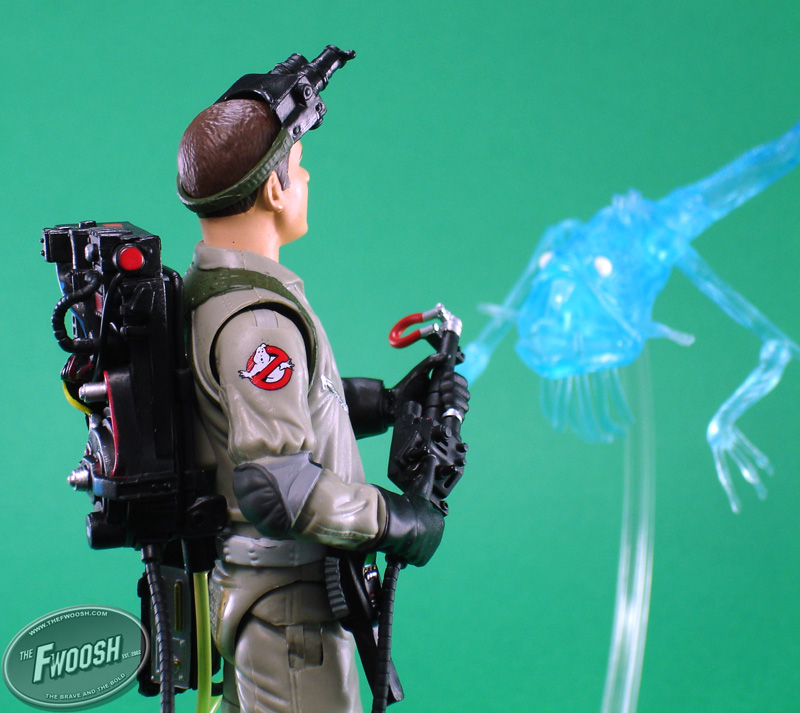 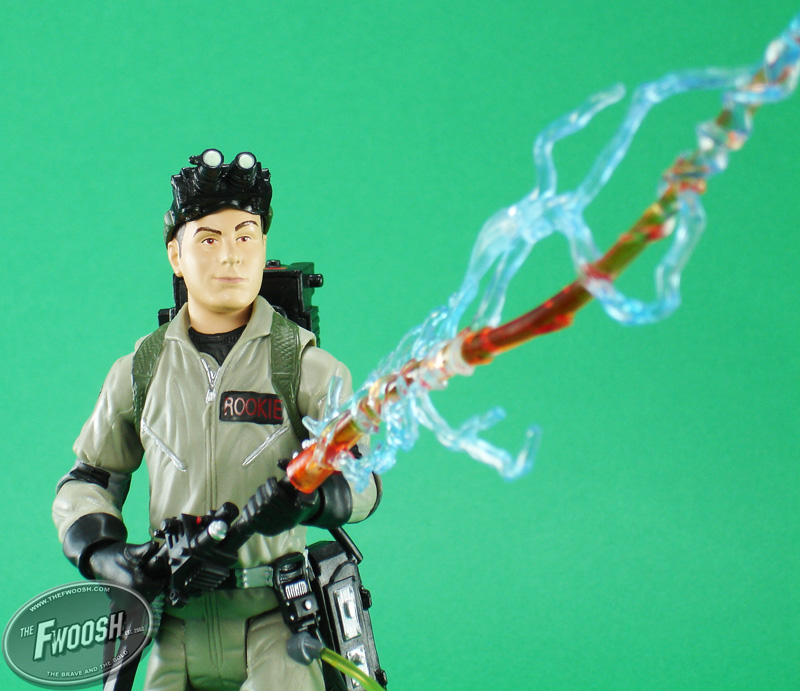 He also includes two, well technically three, accessories. Two of them were previously released with the Winston figure, the opening Ghost Trap and energy field. As far as I can tell, the trap itself is exactly the same as the previous release, but the energy field is now cast in a clear orange plastic as opposed to the blue. I actually like this new one to be the end of a proton stream to “capture” a ghost so there is some variety that can be offered with that.

The other accessory is a fantastic pair of Ecto-Goggles, this time screen accurate. The Marshmallow Mess Ray figure had a pair from last year, but let’s face it, they did not really look like the movie version. So… upon first glance I figured this guy would be worth it to me just to get a pair of good goggles for Ray. Now, the goggles are great, I love the sculpt and they are pretty spot on. They really look great on the Rookie. Unfortunately, they are pretty big for Ray so if you were planning on using them for him, a little blu tack will be needed to get them to stay on his head. They look alright once they are on (your taste may vary), but I will take this opportunity to request a new head sculpt for Ray when they release another version of him. A little more accurate and not as “squished” would go a long way in getting a better Ray figure, and the cherry on top would be that the goggle would fit him just right. If you plan on keeping them on the Rook though, they are perfect.

Even though the 2012 subscription was cancelled, the Ghostbusters line continues to chug along. We know we are getting the Dana/Zuul figure next but after that, we are a bit in the dark. I hope that we can get another unique character for the line, I would be really sad if we never got Gozer or Janine or Janosz. I was skeptical about displaying this figure with the rest of the group, but I have to say that I am delightfully surprised with how well he turned out. He feels like a complete figure and I know that could have easily been lost on a release like this. So, you can now customize yourself into the GB uniform and be better outfitted than the guys with almost 30 years of experience!

*Thanks so much for reading and thanks to Rhobyn and the GB team for sending this green horn along for a First Look.