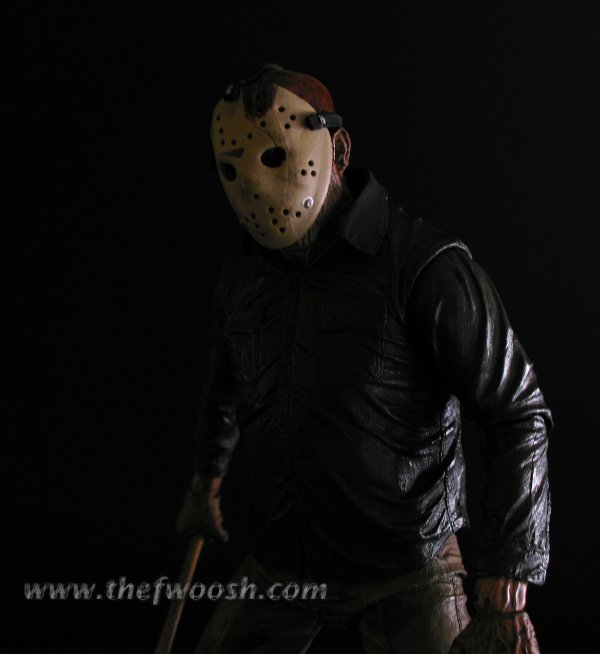 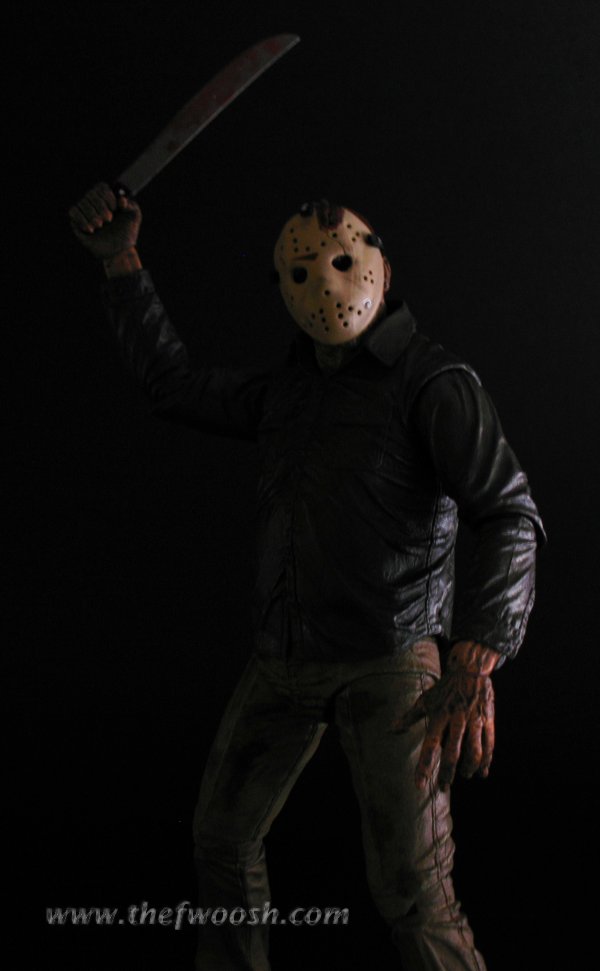 Unfortunately, despite several figures that have been released over the years, I’ve never had a decent, properly scaled and articulated Jason figure. Some of the previous NECA or McFarlane figures have looked nice, but their articulation has been limited and that equals no purchase to me. I did buy the Revoltech figure from a few years ago, and while that was a great little figure with plenty of the much-desired articulation, it was a little figure at around five inches and was a bit of an oddball. 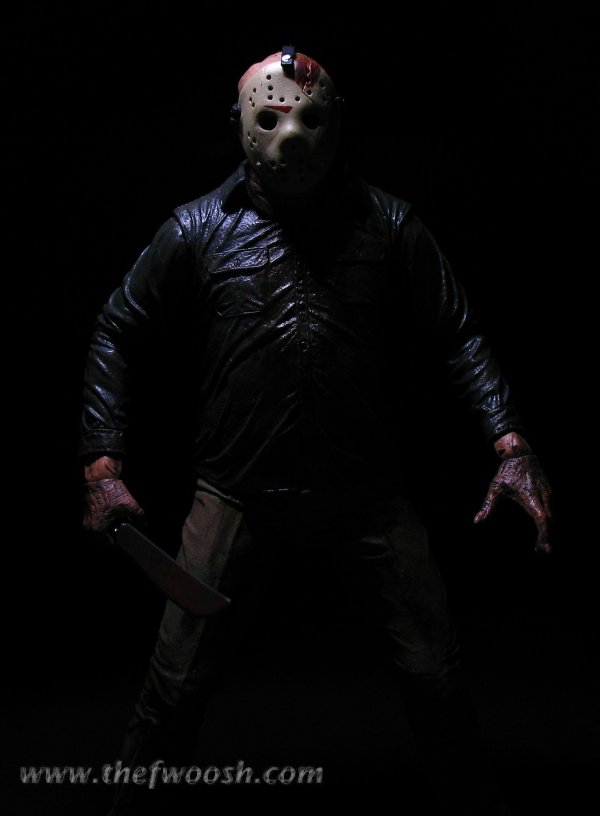 However, recently NECA has started putting out Friday the 13th figures with the articulation I need in my toys, and that’s made all the difference. And since NECA’s newly articulated figures all fit into a similarly scaled universe, Dutch can be sent to a certain lake to take care of an undying boogieman, or Jason can be picked up by a government syndicate for dissection and end up in New Detroit fighting Robocop. Or something. Either way, finally, Jason can kill with style. 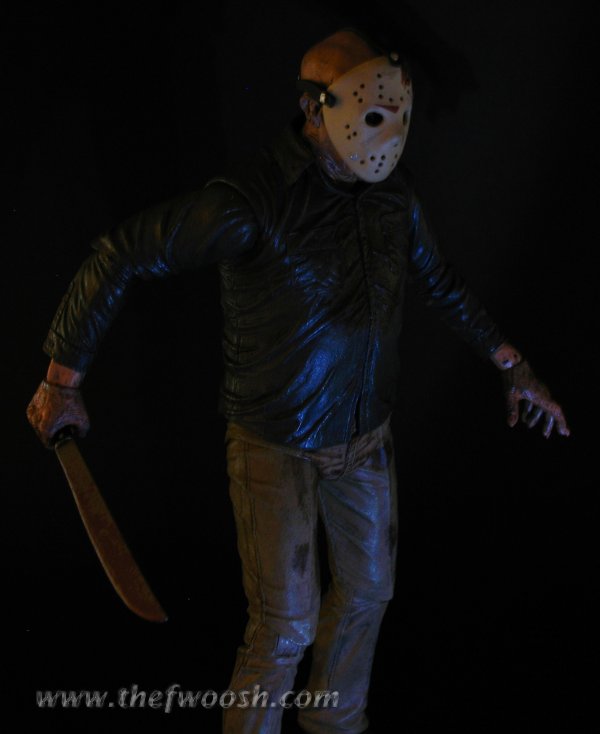 NECA has been infusing several properties with a standard 25+ points of articulation. While some may feel that Jason’s “not a ninja” and therefore doesn’t need much articulation, to them I say, and I quote, “Horseballs.” This is what I’ve been waiting for. 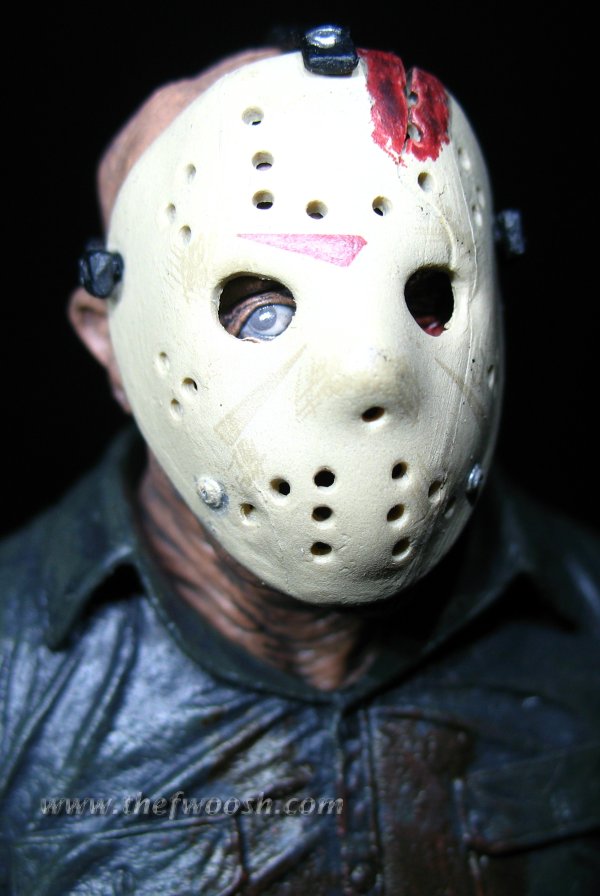 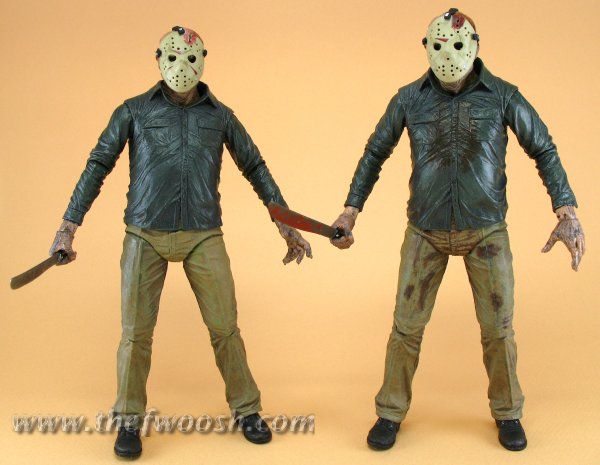 The pair of Jason figures that make up Series 2 are from Friday the 13th part 4: The Final Chapter. Clearly, it was not the final chapter, but it did have Corey Feldman as a creepy little kid, so there’s that. The set consists of two different Jasons: regular and damaged. From an initial overview, there’s not much difference between the two other than the weapons they come with and the blood on the shirt. But the main difference is apparent once you take off the masks: 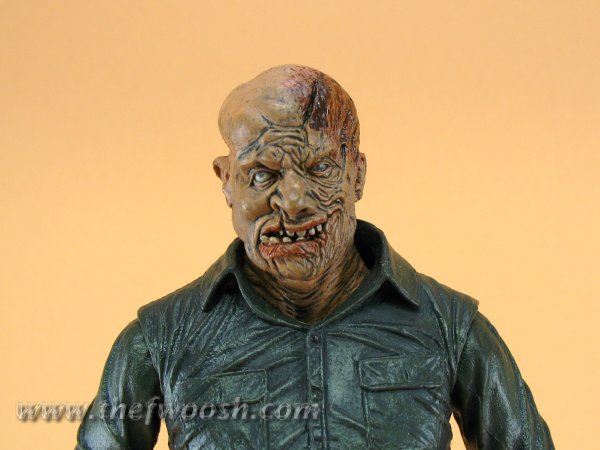 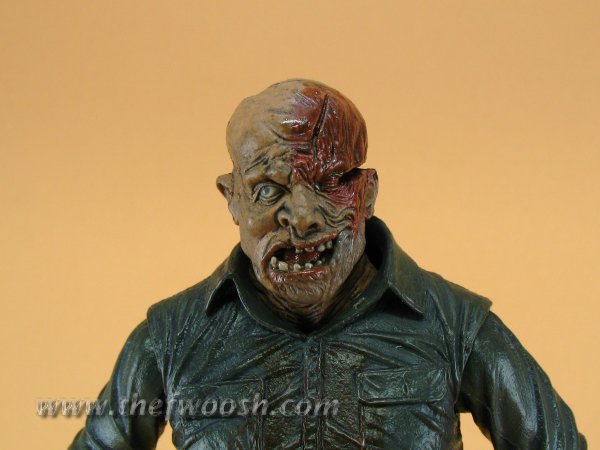 Damaged Jason is stricken with the pretty severe machete wound he sustained at the end of the movie. It was an unpleasant scene, but it makes for a cool-looking figure. Jason is an ugly punk (whose decomp status just kept rising the further into the movies he went), and the addition of a machete wound did nothing to pretty up his features. The headsculpts are dead-on to the source material. 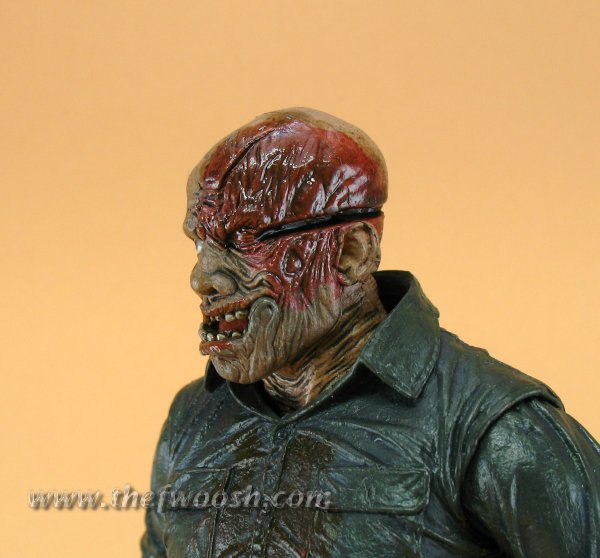 Additionally, you can fit his machete into his wound and it stays put: 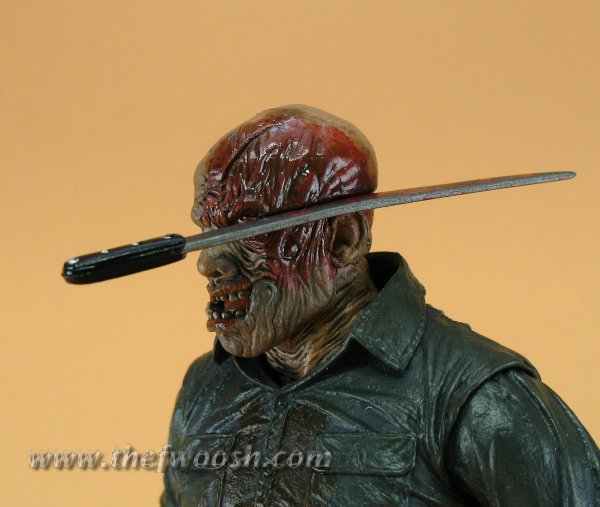 A few of Jason’s articulation points are a bit hampered. First, I’d like for his arms to have a bit more bending range to them like the shirted Dutch figure, but unfortunately they’re sculpted in a way that doesn’t allow it. And second, due to the pantsculpt, his ankles don’t move much at all, which means some precise balancing is needed to pull of some poses. I know it probably couldn’t be helped, but it had to be mentioned. 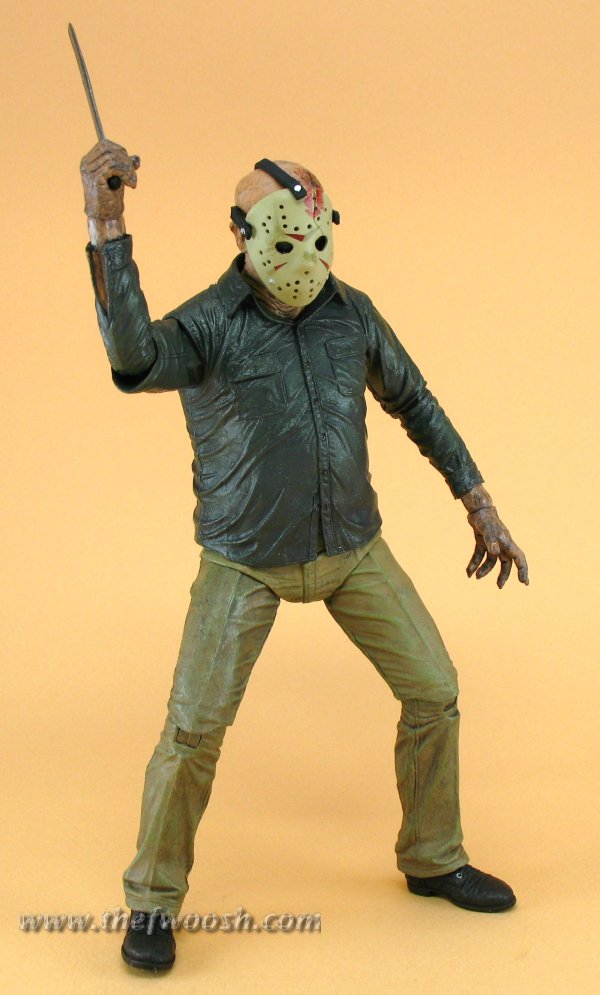 Otherwise, this is a great set of figures, well sculpted and well detailed. The ball jointed hips underneath a flexible crotch allow deep bends, and he does have torso articulation underneath the flexible shirt. The shirt impedes his motion a bit, but he can get into some crouching poses. 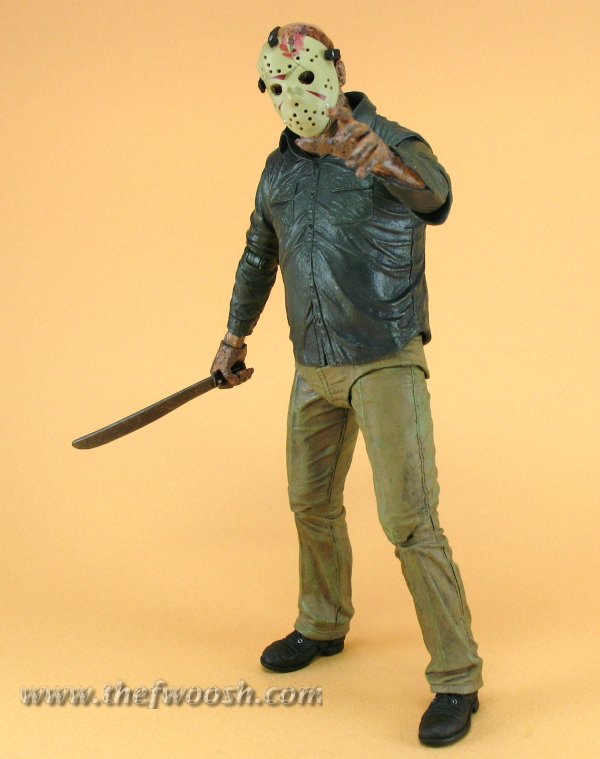 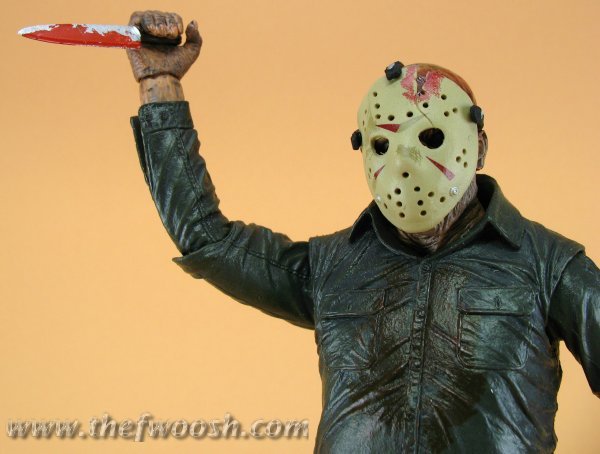 I hope this line continues pumping out a Jason for every movie — even the Terminator Jason from that strange little space trip he took. I also hope they decide to put out a fully articulated version of Freddy as a compliment to Jason, but that’s a completely separate issue. 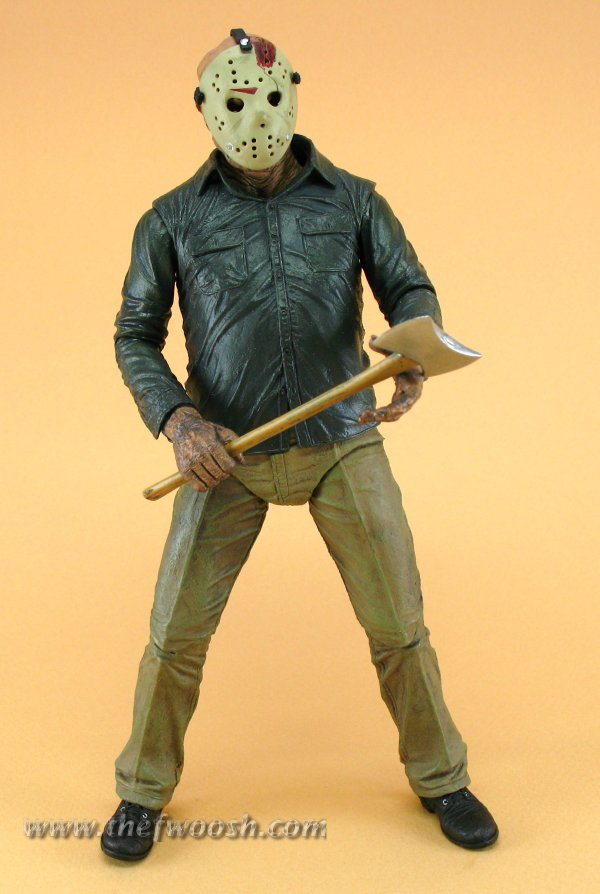