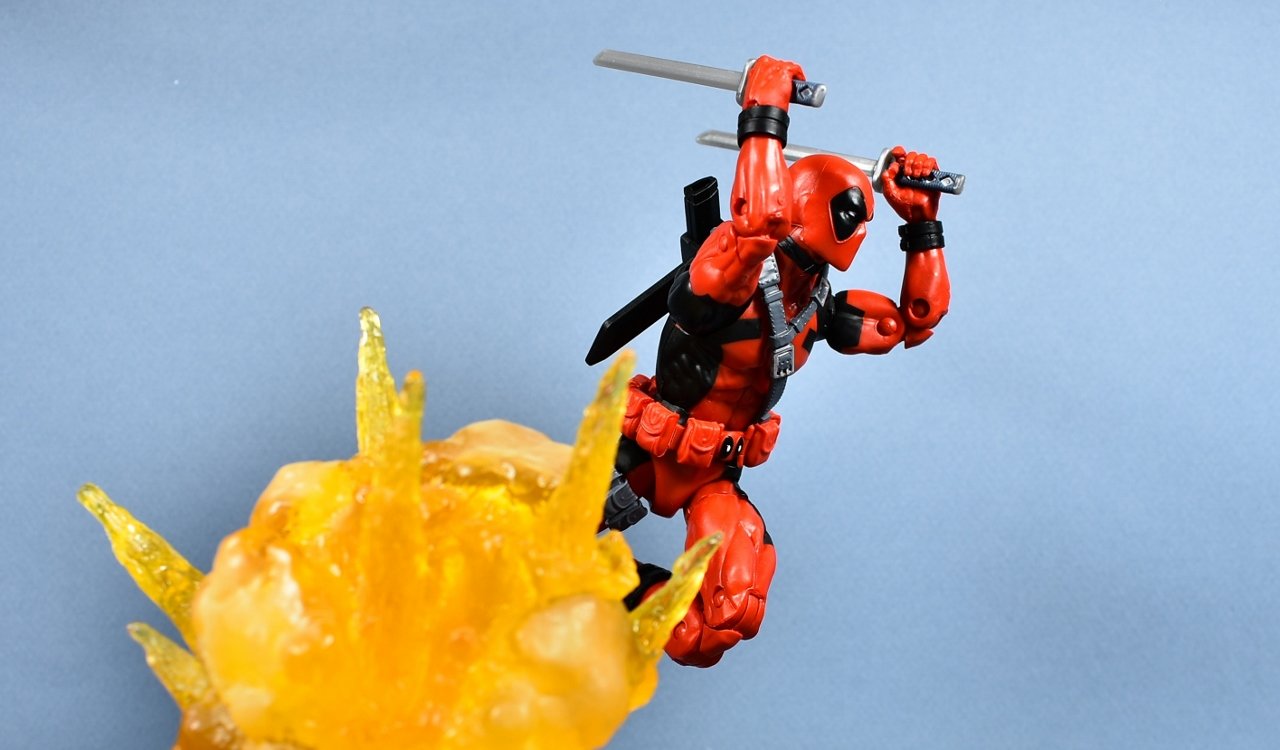 Today’s installment of the Deadpool series brings us one figure who has a history of controversy in Marvel Legends, and yet another version of the star of our show.

If you were around the Fwoosh when it was announced that X-23 would be getting a figure in wave 12, then I really don’t have to say anything. I had just joined, so I was able to see first hand just how super-serious people were about the word “Legends” in the title Marvel Legends. There was much fury, much anger, and much denouncing. Oh, the denouncing. X-23 was going to kill the line—or so you would have thought.

See, at the time, this female clone of Wolverine was a newish character, and as such had not “paid her dues” and earned her place in line, at least, according to the more vocal contingent.

Things like that were a big deal back then. 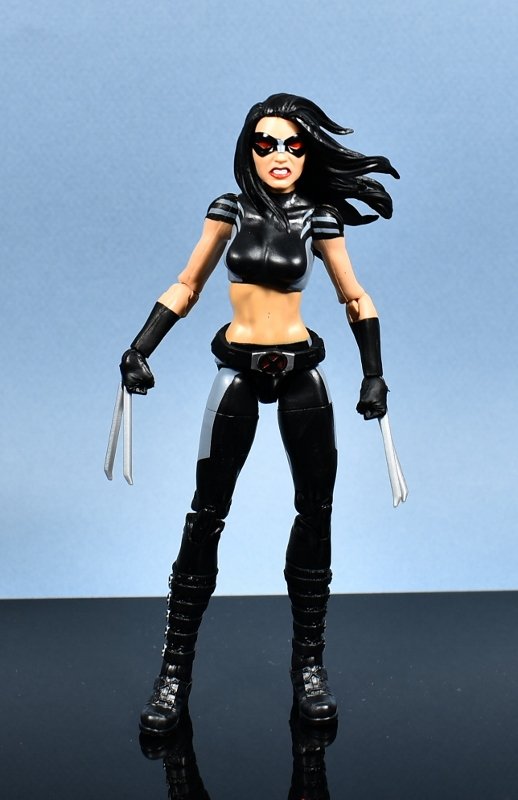 What a difference 15 years makes. Now, Laura Kinney has been firmly ingrained in the Marvel Universe, has headlined her own title and has also made her cinematic debut. I guess that qualifies her for Legend status.

Regardless of the fecal storm that surrounded her initial figure, the figure itself—the point of everything—was, in a word, troublesome. There were two versions—purple and black—and both of them looked a little like articulated lollipops. She had a largish head and a scrawny body, which actually makes sense to depict the younger girl she was, but the figure had the typical odd proportions of figures at the time.

But she did have foot claws. More on that later.

This time around, X-23 is on a much better and more well-proportioned body, without that lollipop syndrome going on with her head. The body is appropriately smaller, as she’s still a growing girl, but still looks like its capable of kicking ass. I know there is a push for double-jointed arms for the female figures, but this figure gets a very nice range of motion out of just the single joints, and I wasn’t truly annoyed at anytime during the moving her around stage where I felt cheated out of a pose due to her arms. They get a little better than 90 degrees worth of bend, so there’s a definite uptick in engineering.

She gets an okay amount of motion out of her ball-jointed torso, but a little more would have been ideal. As it is, she can’t get truly deep bends or crunches, but there’s enough there for personality. The hair is sculpted dynamically so she can move her head around quite a bit without it getting in the way.

Her expression is appropriately “pissed.” She’s a moody character with the same violent temper as her genetic template, so having a permanent bitch-face going on is very appropriate. She looks like she’s about to slice someone up at any given moment.

My main issue with the articulation is at the hip clearance. She can’t get her leg to stick fully out, so that compromises the deep bends that could have helped out the lack of torso crunch. If there was a little more clearance in the plastic there it would have helped immensely. I know a lot of people are going to be angry at her floaty belt, but you can glue it down easily.

X-23 features two claws per hand, and they are removable. They do leave a fairly noticeable hole much like on recent wolverine figures, but that’s expected and acceptable in lieu of alternate hands.

The biggest loss here is the lack of foot claws. In case you’ve been living under a penguin, the original X-23 had fold-out foot claws, because the comic X-23 one-upped Logan by having a single claw erupt from between her toes, in what is the most painful sounding Weapon X Program add-on ever. This figure, however, does not feature fold-out foot claws. Surprisingly (not really surprisingly), she doesn’t even come with a set of extra claws and pegholes for the feet. So there’s just no way to have your modern, updated X-23 figure slice and dice someone with her feet. And in ten years, there will be nobody to discover that this ten year old figure has foot claws.

It’s a minor tragedy, I tells ya.

Despite a few minor articulation hurdles, X-23 is a fine update to an older figure, and does pretty much everything she needs to do. Well, except for the foot-slicing.

Now, onward to Deadpool, the man for whom the wave is named. 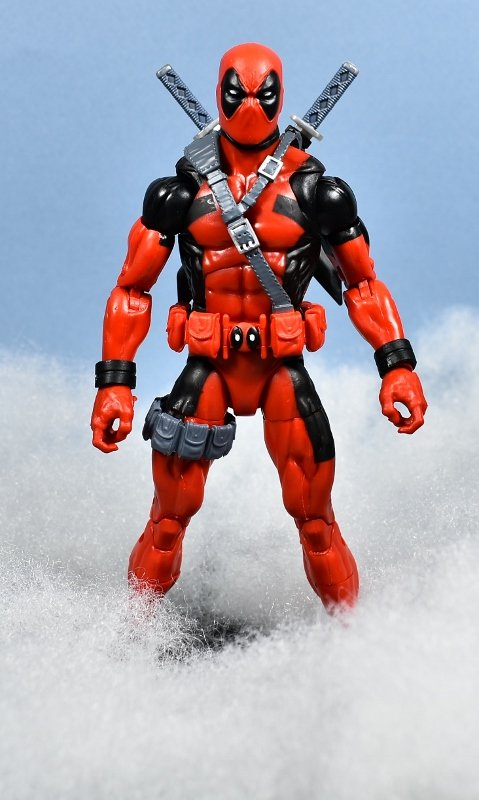 I still remember the near impossibility of trying to locate the original ML 6 Deadpool figure. It wouldn’t be until the following year and Wal-mart’s “Best of” release that I would lay eyes on Wade. Now, because of a movie and rampant popularity, we’ve got all the Deadpools we can buy, in every flavor.

But this version is the original. This is the OG Deadpool, if you will, the red and black merc with the odd-at-the-time yellow dialogue bubbles who would plague a bunch of Liefeld-drawn X-force members in panels filled with anatomical nightmares.

Original flavor Deadpool loses a lot of the bulk of later iterations, so this figure is as stripped down as any ’90s creation gets. He’s still loaded down with pouches, because a pouch a day keeps the doctor away or something, but otherwise he’s a little sleeker, a little less weighted down with armored bit and chunky boots. He’s also missing that little “ploop” on the back of his mask. This Deadpool has yet to break the fourth wall. This Deadpool doesn’t know he’s in a comic.

I didn’t realize how much I missed the butterfly shoulders until they started creeping back into marvel Legends. I really didn’t think I missed them. I’m still on a case-by-case basis for when they’re needed, but for hyper-limber characters liked Deadpool, that little extra flex-and-stretch you get really helps. This is an exceptionally well-articulated body, featuring a lot of that older TB ML mobility without the negatives. I want a Spider-man on this body.

Otherwise, the double knees and elbows are great, and the hips give you plenty of bending range. His hands grip his swords nice and tight, and they slide into the scabbard on his back and stay put.

Speaking of hands, he has trigger-finger hands, but no guns. Now, I know that he’s a product of the ’90s when everyone had guns and swords and swords on their guns and guns on their swords and guns where the trigger was just another gun, but his swords aren’t guns (I think), and he has no guns that utilize those trigger fingers. Obviously, he has his pair of swords, but that’s it. I’m assuming the budget was eaten up by the bigass guns that Cable came with. Which, that’s ok, he can just borrow one of those, I guess, but it would have been nice to get at least one of those patented Rob Liefeld guns which looks more like plumbing equipment than a gun. I still can’t believe he didn’t somehow manage to have Deadpool grit his teeth even with a mask on!

Despite the lack of accessories, Deadpool is yet another super-fun addition to a wave that has red-lined the limits of hand-candy. I was not a pretentious teenager with delusions of critical superiority when it came to comic books, so I definitely owned my fair share of X-Force, despite knowing that Liefeld was drawing funhouse mirror versions of real people. Deadpool’s red and black aesthetic, masked coolness and sleek super-kung-fu was always a welcome sight, and his toys keep getting better and better.

Okay folks, that wraps up all the regular figures from this wave. Come back tomorrow when a big hairy Canadian gets an article all to himself. 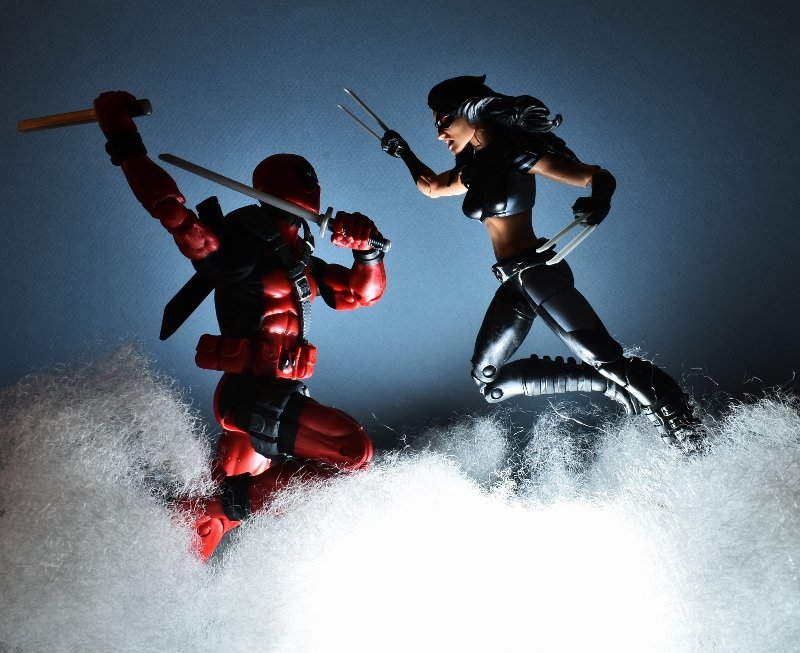 You can pick up X-23 and Deadpool at Big Bad toy store, or buy a set.