If you have not noticed, I have been a pretty mopey Fantastic Four fan for the last several years. My favorite Marvel team has been conspicuous by its absence in comics and toys, and has been cut off from the Marvel Cinematic Universe with only a HORRIBLE movie to represent Marvel’s First Family on screen. But then, suddenly, with a tiny, itsy-bitsy, multi-billion dollar business deal (still technically pending) things might just be turning around for the Fantastic Four. However, thanks to Walgreens, we have gotten a GREAT head start with the team in Marvel Legends.

Yes, I have been outspoken about all things F4, especially as they relate to plastic, but maaaaaaaaan, I love them so much, I just could not help myself. The possibility of them now being in the MCU, and making a comeback in the comics are such a good things, I cannot help be cautiously optimistic. However, Walgreens continues to be my church for Fantastic Four Marvel Legends, and we have talked quite a bit about their exclusives recently, especially Sue, Johnny, and Medusa. Well, the proper team is now 75 pecent complete as the leader and patriarch has emerged from the Negative Zone, and Mr. Fantastic himself is starting to hit the shelves of neighborhood Walgreens all over the country. 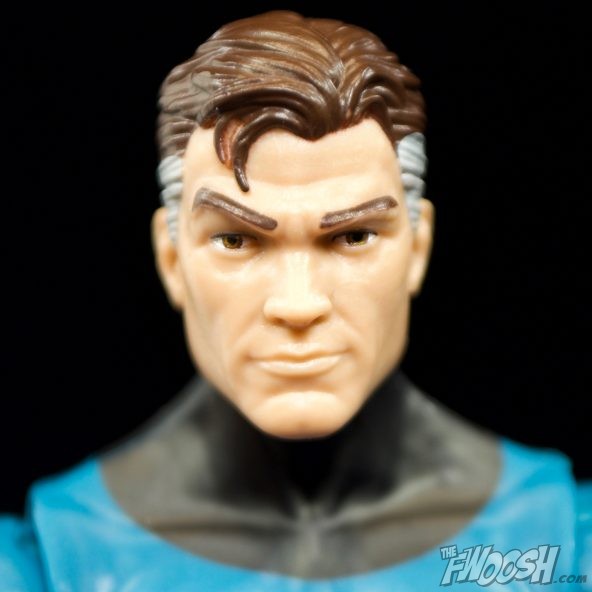 I realize that we are in the k-hole of Toy Fair, coming down from all of the new ML reveals, including the fourth, final, and, in my opinion, most important member of the team, The Thing, but guys, Reed is really something to be excited about. I was pleased to get a new Medusa with a costume more to my liking between Johnny and Reed, but I am really happy to be back with the main team. Plus, the great news is that of the three F4 member we now have, I find Reed to be the best. That is double good news because Reed has had a pretty abysmal history in Marvel Legends up to this point, so this is by far and away the best Mr. Fantastic figure I have ever been able to add to that collection. So in saying that, I am kind of also saying this is the best RICHARDS(!!!) figure we have ever gotten, period.

While I know there are divides in aesthetic choices for the Invisible Woman and Human Torch Walgreens figures (and for the Thing already, too), but honestly, I think people are going to be hard-pressed to argue those types of points with Reed because I think Hasbro nailed it. I mean, they could have skimped here and there on this figure and it would have likely STILL been the best Reed figure to date, but I am so pleased with everything from the head sculpt to the accessories that I appreciate the extra effort. The stretchy Reed from the Ronan series was probably the best overall Reed to date, but this one still beats that figure, and for the first time ever, I am really happy with a Mr. Fantastic ML. 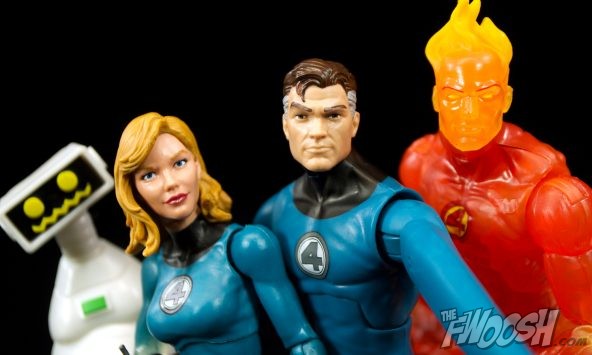 Like any good ML figure, Reed here takes the best and most appropriate existing parts in the current library, and is supplemented with new pieces as needed. I know there is often a concern about figures getting new tooling when they are a retailer exclusive, but the F4 has done well here thus far, and Reed is no exception. So, we get some reuse in the legs (Pizza Spidey), and even the stretchy arms are carried over from that old Ronan series Mr. F., but he DOES have a new torso and that is 100 percent appreciated, and 1000 percent NEEDED to fit the build of Reed. This is not some muscle bound superhero, Reed is scientist first and foremost, and his powers consist of stretching and changing his body form, so the “elastic Mr. Fantastic” physique is really brought out by this less defined and slender upper body. I glad it is here, and I glad it is now in the parts library for ML because many other characters will be able to use it. 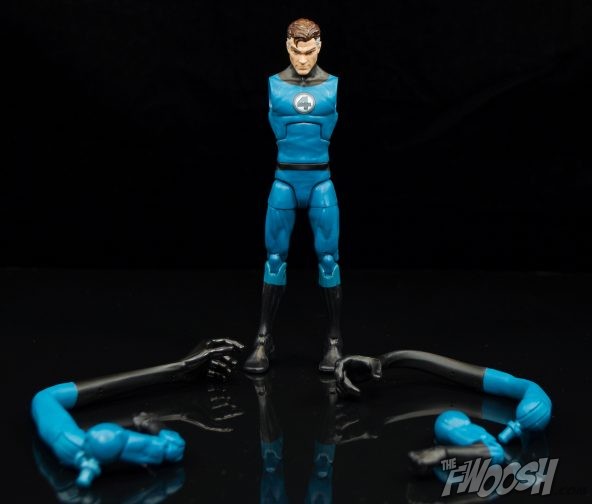 Then there is the head sculpt. Poor Reed, he has been nothing but a prized pig in terms of head sculpts and likeness in the past with most of ML. Sure, that stretched out Reed was okay, and the Wieringo sculpt was fine, but stylized, and the less said about the rest the better. But that is ancient history now because this new Reed dome is, ahem, on fleek. The aesthetic they are going for in this Fantastic Four assortment is most certainly modern, but this Reed head is pretty useful for most eras as it captures his look, and more importantly, his personality really well. That raised eyebrow really sells the look, and I am very happy here. No previous ML Reed Richards likeness comes close to this one, and if this were to be our very last Mr. Fantastic ML figure ever (I am sure it will NOT be), I can be perfectly happy.

These Walgreens exclusives have also done a good job in getting most of the figures accessories, and Reed is no exception. I am counting his swappable arms here because, really, with the exclusive status, they could have easily gone with one set or the other and left it there. These work pretty well, especially in illustrating Mr. Fantastic stretchability, and while I appreciate the wire bendy construction, the plastic used is just a bit stiff making some poses difficult. That is a relatively minor nitpick, but if I had to choose one weakness with this figure, it would be that. Reed also gets the Ultimate Nullifier, and while it is a small addition, it is an essential and iconic invention and implement, so I am really happy it is included, and he can hold it well with his right standard hand.

Reed Richards is back from the Negative Zone, and, people, we are so close now. We have three-quarters of the Fantastic Four in modern Marvel Legends, and The Thing has been officially announced and is up next at Walgreens. I still cannot believe it. Sure, I would not call any of the figures 100 percent perfect, and very few action figures are, and of the team released thus far, Reed definitely comes the closest. Hasbro did a great job here, and Walgreens is really benefitting by having such an awesome and focused spread of exclusives, I hope it continues past Silver Surfer and the rumored Super Skrull. Reed is taking Walgreens shelves by storm right now, so go out and find him, you will not regret it. 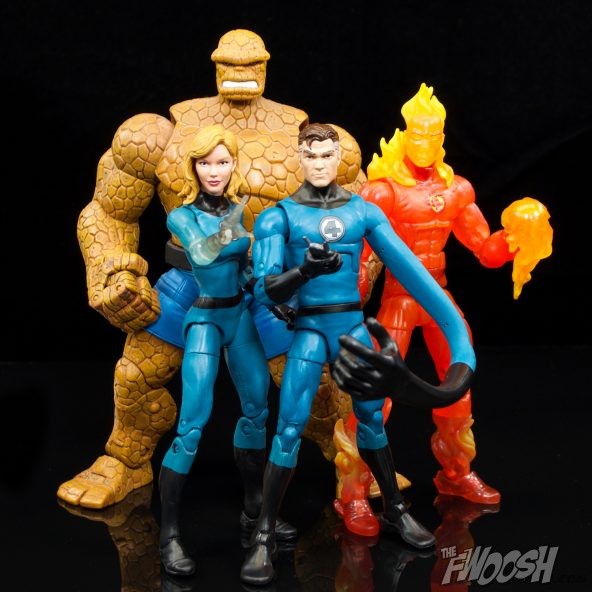 *I want to add that there has been some chatter online about Reed’s uniform color not matching Sue’s, but I find that it most certainly does. There might be a tiny, and I mean TINY variance, but it is completely negligible and hard to even see, so don’t be all worried about that. 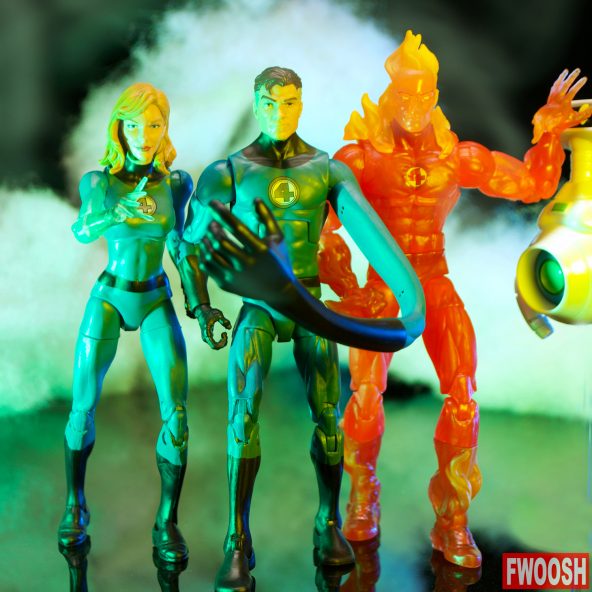