Lucasfilm just announced that David Benioff and D.B. Weiss will be working on a new series of Star Wars films.

Benioff and Weiss are known for their current HBO series Game of Thrones.  The press release goes on to say that the announced series will not be connected to the Skywalker “Saga” films, nor will they be connected to Rian Johnson’s trilogy.

Maybe Robo’s mom can snag a role in the new movies and we can get an official figure of her?

Check out the full press release at the official site: StarWars.com 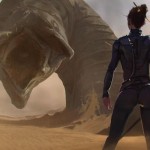