Every year the Transformers Collector’s Club offers an incentive figure, usually a repaint or a retool, that ships to fans who sign up for the club and pay the annual dues (in the neighborhood of $40). In addition to the figure, club member receive a subscription to the official magazine, access to the official store, etc. This year’s incentive figure is a new take on Beast Wars Rampage, otherwise known as Protoform X, which was his identity before he became the Predacon’s resident psychopath. This is intended to be Rampage before he adopted his king crab beast mode in the series, as best as I can tell.

This was a figure I wanted the second it was announced, so naturally I forgot to sign up for the club by the deadline and had to rely on eBay for my figure. Fortunately, eBay came through for me within the first week of his release, so somehow I was able to get my figure while many actual club members are still waiting to get theirs in the mail. Go figure.

Rampage, as a character, is one who doesn’t come along very often. He’s an immortal killing machine who feeds on all the pain and suffering he causes — he’s the definition of a psychopath in the Transformers universe. He hates the Maximals, he can barely tolerate the Predacons, and he relishes acts of cruelty that would make any Predacon or Decepticon recoil. In other words, Rampage is pretty awesome as far as characters go.

So does this figure do the character justice? Let’s take a look! 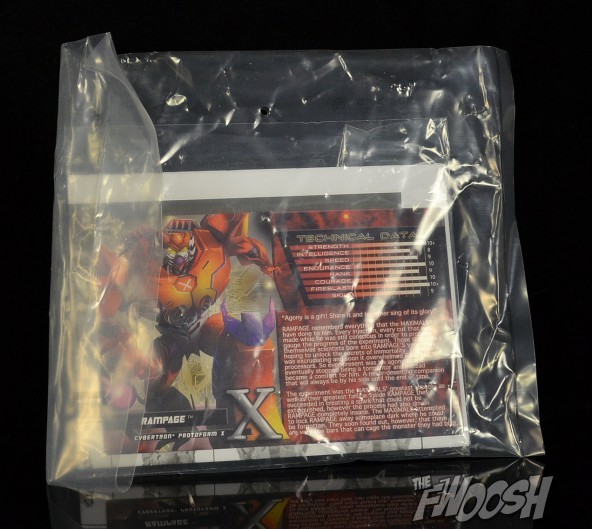 There’s no fancy packaging to speak of, just a plastic baggie that housed the figure, instructions, and the figure’s tech specs. This bare-bones approach is one I could get used to. It didn’t make the figure any less expensive, but it did create a lot less waste for me when I opened him — that certainly isn’t a bad thing.


The bio is pretty cool and is way more detailed and thorough than what we usually get from Hasbro or Takara. It provides a lot of information about Rampage’s background, which is especially nice for anyone who isn’t familiar with the Beast Wars character or the series.
Rampage is a repaint of the deluxe class Megatron from the Transformers Prime line. He has a newly sculpted head, but other than that, the figure is a straight-up repaint of Megatron. But as far as repaints go, this could very well be the best repaint I’ve ever seen. The paint job on this figure is gorgeous. The gradient from orange to red is smooth and clean — it looks fantastic. Even though I know this sculpt comes from Megatron, I don’t see or think “Megatron” when I look at it; I only see Rampage. That alone speaks volumes to me in terms of the effectiveness of the repaint. 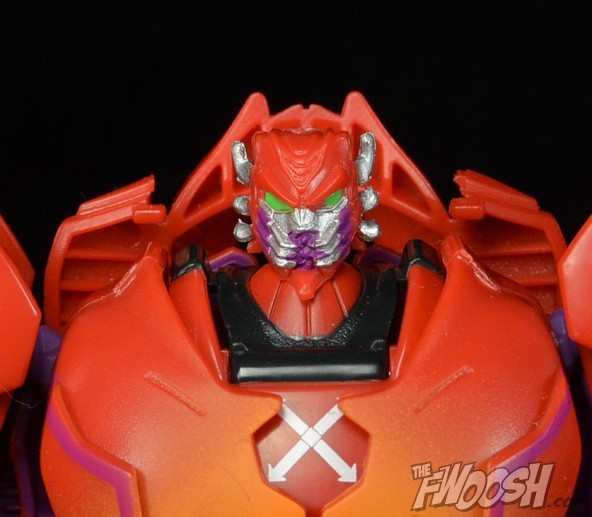 His head sculpt is as well done as his paint job, but… it’s a little bit on the small side. It’s tiny. It needed to be small in order for his transformation to work, but it ends up making him look rather pin-headed. This is the only nit I have with regards to the overall figure, and it doesn’t even bother me that much, really, but I can see some people taking issue with it. I will admit I was taken aback and let out a “Holy crap!” the first time I saw it because I was shocked by just how small it is, but I got used to it quickly, and it doesn’t stand out at all on my Beast Wars shelf. 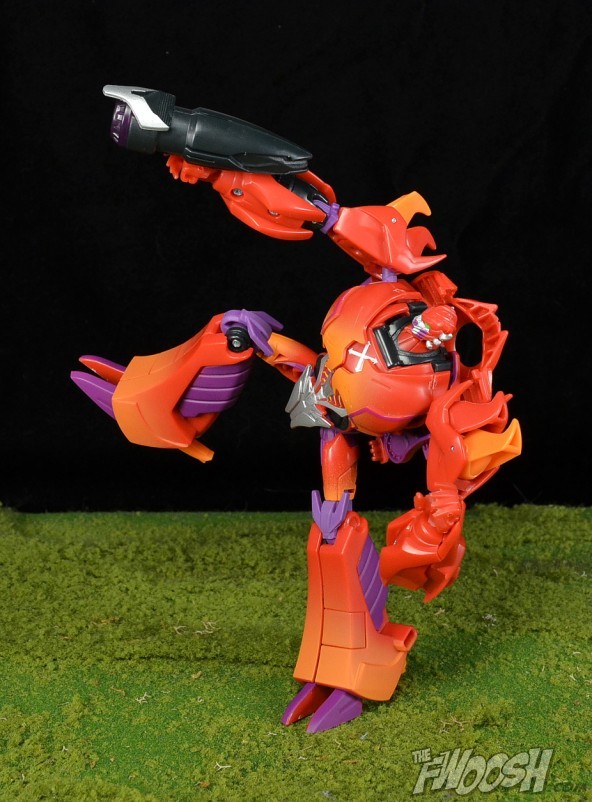 The figure has a good amount of articulation and can be posed dynamically with ease. His articulation in ‘bot mode goes something like this:

It doesn’t seem like much, but it doesn’t feel as though he’s missing any articulation. He could use some wrist swivels and maybe some ankle tilts, and maybe even a waist swivel, but his not having those points of articulation doesn’t prevent cool poses, so he basically has it where it counts.


Rampage is an excellent companion piece to TCC’s Depth Charge, his mortal enemy. Depth Charge was released last year, and, like Rampage, is a repaint of another figure from another line. At one point I did own the original Beast Wars Rampage and Depth Charge figures, but I got rid of them because they both took up so much darn space, so I couldn’t be more thrilled to have both characters on my shelf again, even though neither has a “beast mode” this time around. Still, these two work much better in my collection than their original counterparts did.

I was worried this figure was going to be too small to really serve as “Rampage” effectively because the mold was small for Megatron, but it works better than I thought it would. He’s the same size as Beast Wars Transmetals Megatron, and he towers over the new Generations Waspinator, so his size works for me and is a perfect fit for my Beast Wars shelf. 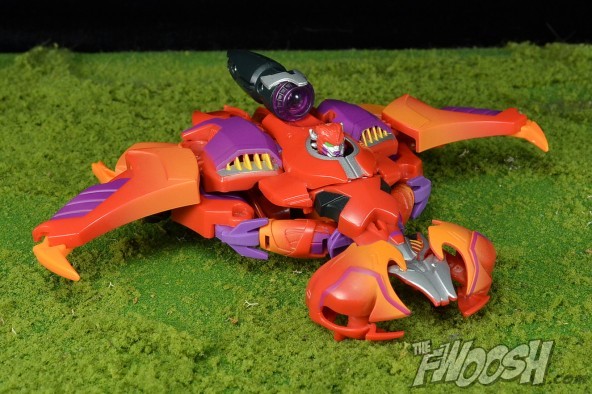 His alt mode is… OK. It sorta resembles a crab (not that it’s supposed to), but what is annoying is how his head just sticks out in the center of the ship. The alt mode’s design is the result of not really knowing what to do for an alt mode for Megatron since Hasbro and Takara have been shying away from a gun mode. As a result, Megatron always ends up being some random Cybertronian jet-thing, so that’s what we get with Rampage here too. The funny thing is, it looks more like a crab, especially in these colors, than it does a Cybertronian jet.

His transformation was a bit challenging because the instructions included aren’t very clear (blurry black and white pics). It took me a couple tries to get through it, but it’s not terrible for a deluxe class figure.

I’m stoked to own this figure and would recommend him to anyone who is looking to add a Beast Wars Rampage to their collection. It’s not screen accurate or anything, but he’s a solid representation of the character.

Unfortunately, the window to get him as a “free” club figure is long gone, so eBay is probably your only bet if you’re after one for yourself. I’ve seen mention of the possibility of the TCC store having leftovers available after they fill all the club members’ orders, but you may need to stalk the club storefront to see if that will be the case.