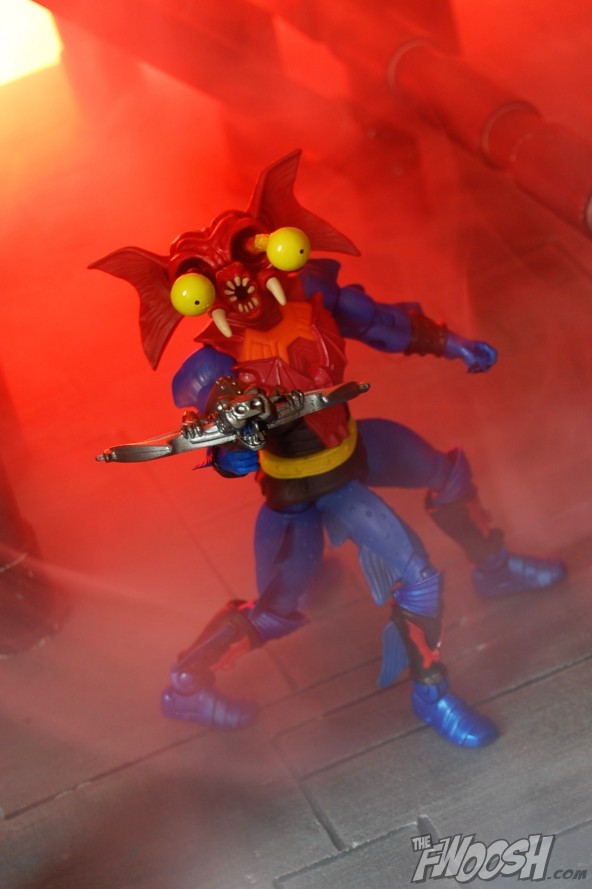 The Horde gets a couple of steps closer to completion this month with the release of Mantenna and the Horde Trooper two-pack.  Today we take a closer look at one of the original Hordesmen — Mantenna! 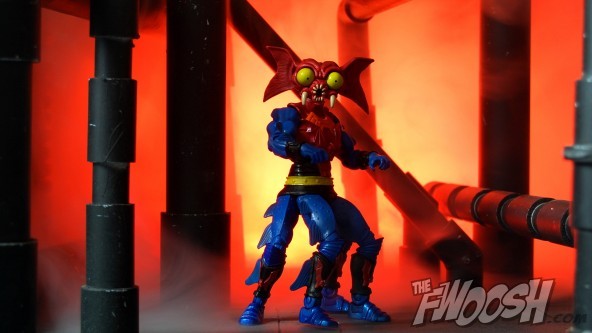 A Rebrunk Nurus from Phelibio IX, Mantenna® has the frightening ability to see and hear over great distances with his highly sensitive ears and periscope scanners. He can do more than just see with those wide eyes, he can fire a variety of horrible beams from them as well including paralysis beams, stun beams and laser waves. Mantenna™ is also an agile scout and often goes out well ahead of his Horde companions to make sure their way is clear for marauding, pillaging and the like. Since he is no slouch in the combat area either Mantenna™ rarely needs assistance on his scouting missions. He uses his antenna eyes to spy on the enemy! 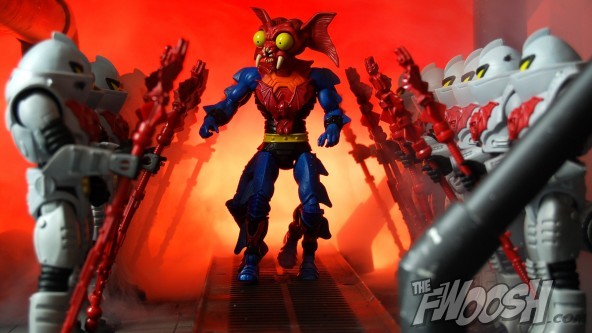 The thing I like about this bio is that it lays out his abilities well.  He’s got some extra power in those peepers and is able to use them.  It’s interesting to me that he’s one of the baddies who doesn’t get colored with the coward brush in the bio since he’s such a weenie in She-Ra episodes. 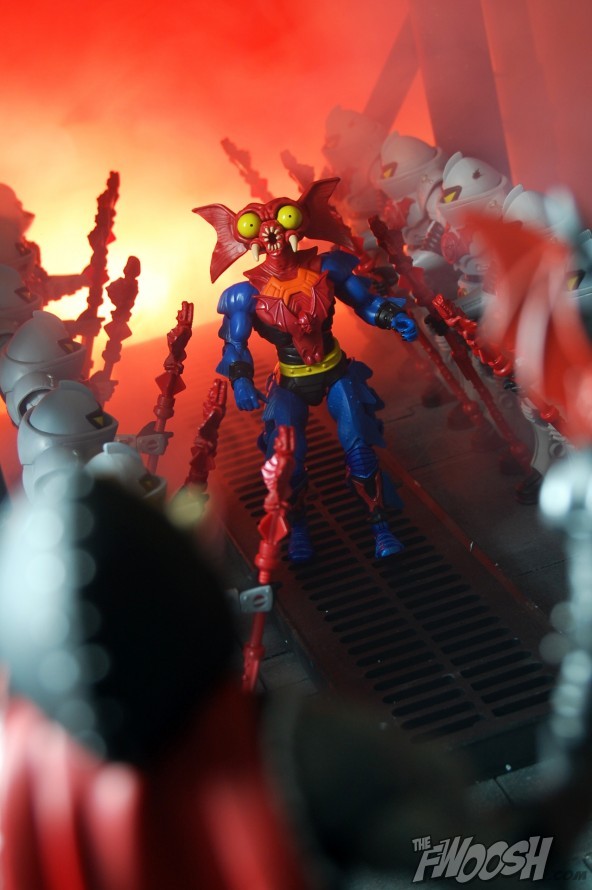 The bio and the frightening head sculpt is helping reverse the lasting impression I have of Mantenna as some sort of weak toady.

Mantenna comes with a new Horde crossbow and an extra set of eyes with extended stalks that allow you to recreate his vintage action feature. These eyes do tend to shoot outward more, while the vintage figure had them shooting a bit more upward. This matches his Filmation eyes a bit more and I appreciate that. 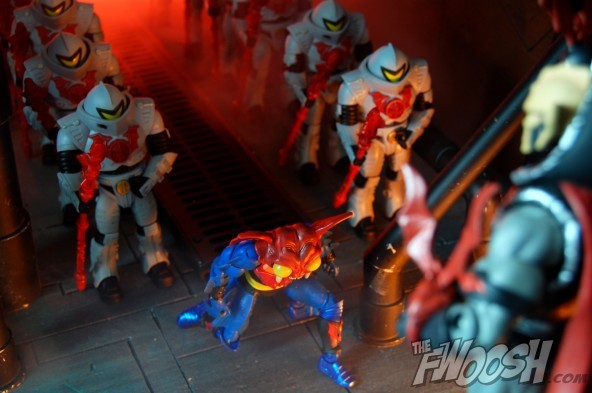 The eyes are made of a soft plastic and have a sharp and disgustingly detailed sculpt. They plug in to his eye sockets easily and hold their position well. In order to put the eyes in, you have to remove the face. It’s also a simple plug that works well and holds position nicely. The upshot of this design is that clever customizer Kevin Kosse was able to sculpt a more Filmation-like face piece that can take the place of the more intimidating vintage mouth. VeeBee posted pics of this piece here.

It’s amazing how much this changes the look of the character.  It’s too bad Mattel didn’t think of including something similar with Mantenna. 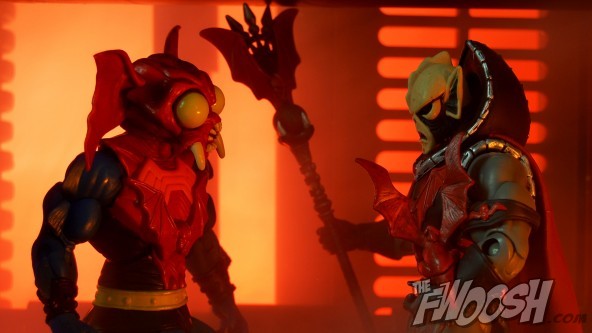 The Horde crossbow is made of a semi-flexible plastic that holds shape pretty well, but I find that there is a bit of a weakness at the handle on these crossbows that can allow for a droop to form over time. Fortunately, the stalk fits well into the crook of Mantenna’s elbow so that’s not as much of an issue with him as it can be with Grizzlor. 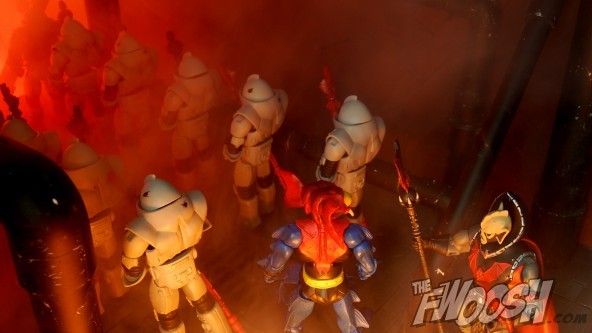 The sculpt on Mantenna is phenominal. He’s one of those characters I wasn’t really sure about. I thought there was a couple of different ways to go on this guy that would be cheaper to tool, but less effective. For example, the vintage figure featured four legs that were really two legs sculpted to sorta resemble four. It wasn’t very successful and looked like a big lump of a leg to my eye. 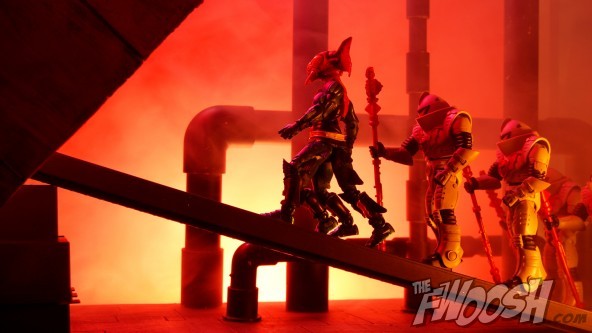 I was a little apprehensive that Mattel might do that for MOTUC figure. Fortunately, Mattel went with the full-sculpt route and Mantenna looks exactly like I hoped he would.

There seems to be a real combination of vintage sculpt and Mantenna’s design from both Filmation and MYP cartoons in this figure.  He’s a great split between those designs, which is perfect. He’s a slightly bulky character in vintage, while fairly thin in MYP and Filmation, and Mattel pretty much split the difference here with a slightly thinner than normal MOTUC torso. 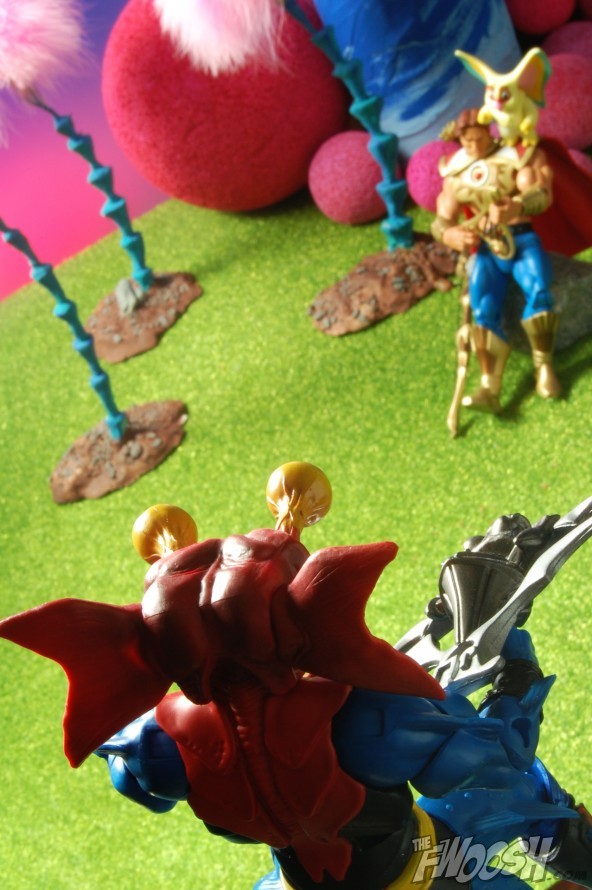 The limbs feel a little thicker than his ‘toon design, but they work with the over all profile of the figure. I think they made the right call in sculpting all four legs as separately articulated pieces. I’m amazed that they were able to get the engineering on that to work because I’ve never seen that before. The legs have a great chitinous texture to them and look fantastic.  All new, but perfectly MOTUC in style. 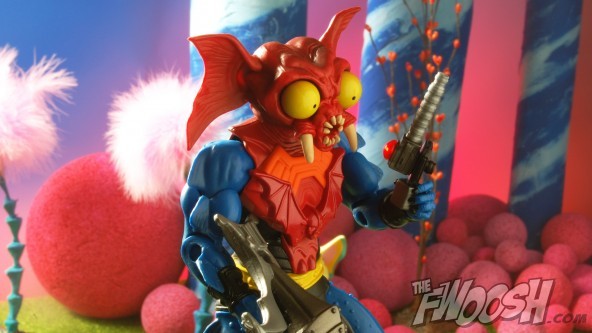 The highlight of the sculpt for me is the head. It’s got a great alien feel to it with skin texture and facial muscles that were not in the vintage sculpt, but they make this creature totally real and scary.

I love how the big bat-wing ears have a leathery texture to them.

Mantenna has the standard MOTUC articulation, except his legs are much more articulated than we are used to in MOTUC. First off, all four legs have full movement and each leg is articulated with: 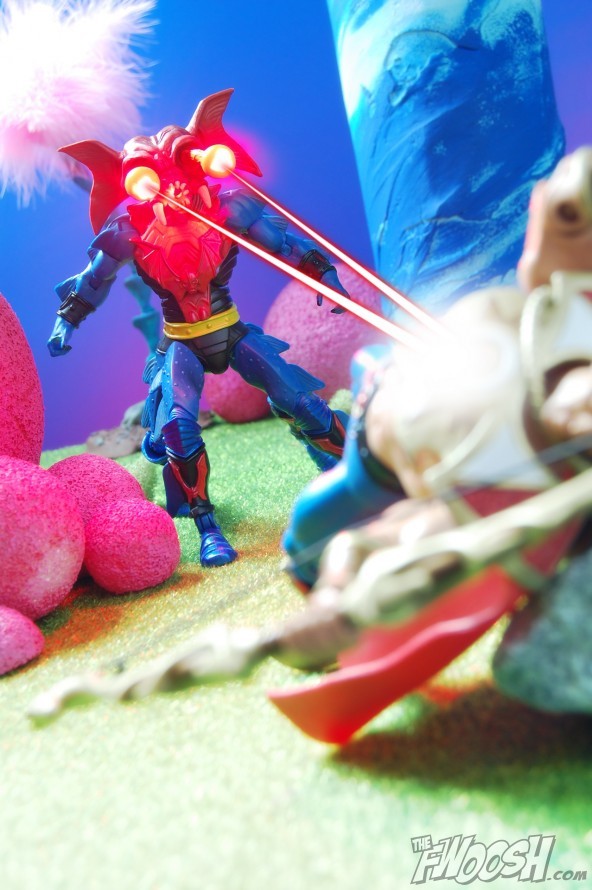 All of this articulation moves freely and well and is useful for a myriad of poses. Mantenna is probably the most stable MOTUC figure in existence, and you can stand him on practically any surface due to the articulation combo. 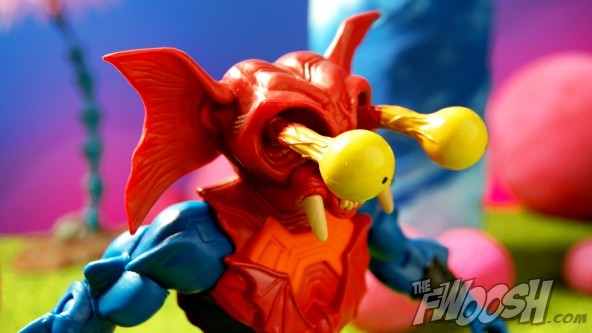 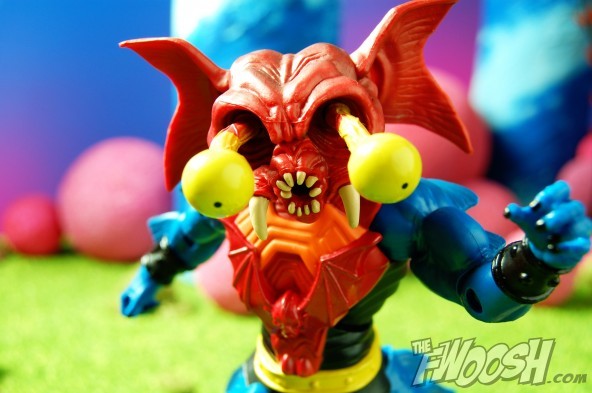 The Teela-style ankle-tilt hinge goes a long way toward allowing for stable posing.  The only improvement they could make would be a double knee, but this all works so well that I don’t really miss that. The ab crunch also doesn’t move forward as much as I would like. 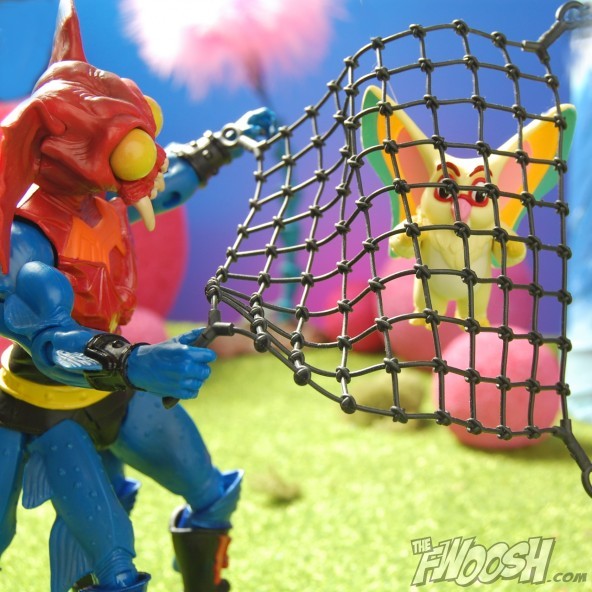 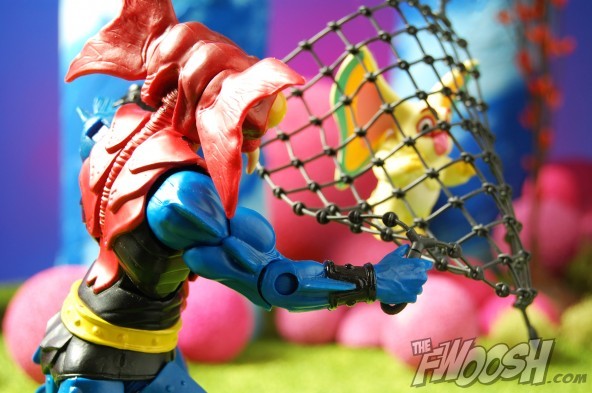 Paint is quite good on Mantenna as he sports some detail shading on his head, excellent metallic highlights on his uniform, and the gloss plastic on the legs works well as the shiny blue skin. 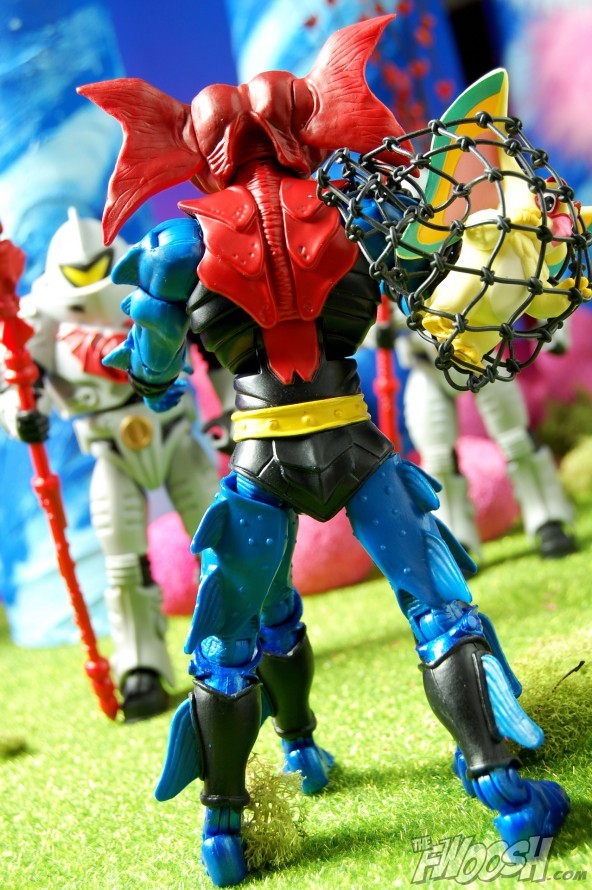 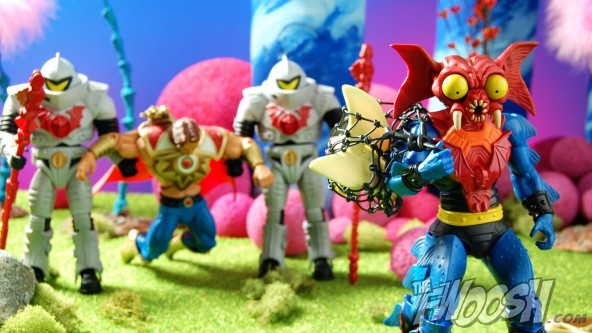 The only paint issue I have is that there are some chunky paint bits on one of my Mantenna’s eyes that marrs the gloss yellow paint slightly. I also notice that the transition from the yellow of the eyes to the red of the eye stalks is a little bit sharp and abrupt. I think it needs a red wash to bring out that gross as hell sculpt. 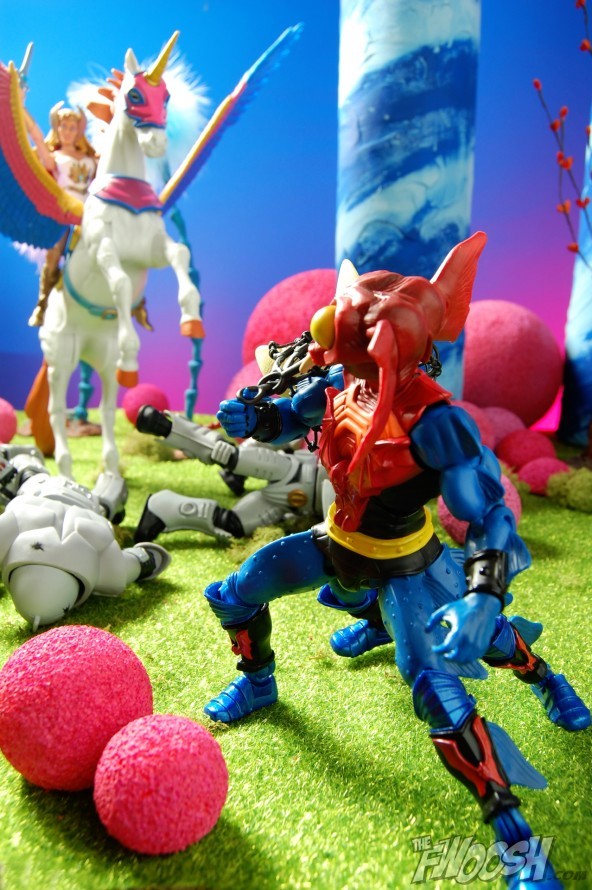 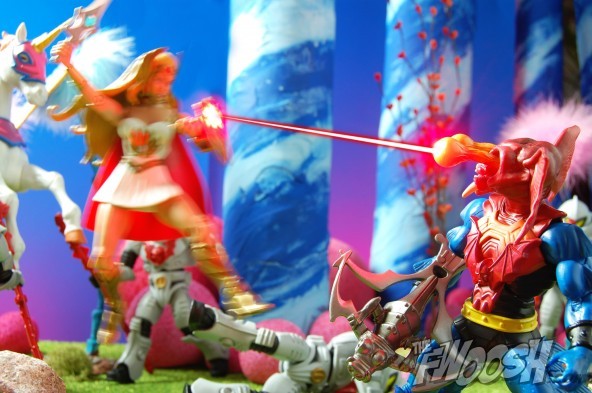 I never had a vintage Mantenna, but over the years I have come to really like the character as portrayed in the She-Ra cartoon. He’s got a fun voice characterization and is actually amusing in the role of cowardly toady to the volatile Hordak. 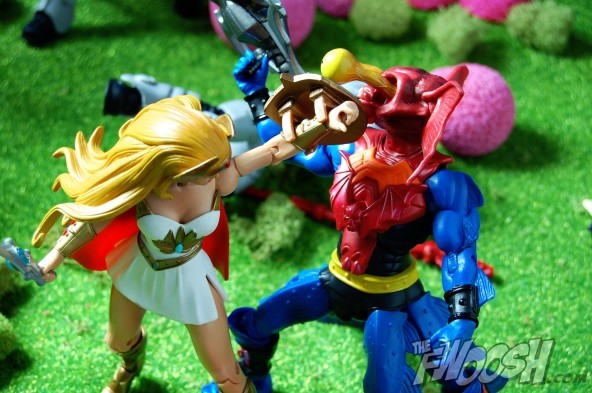 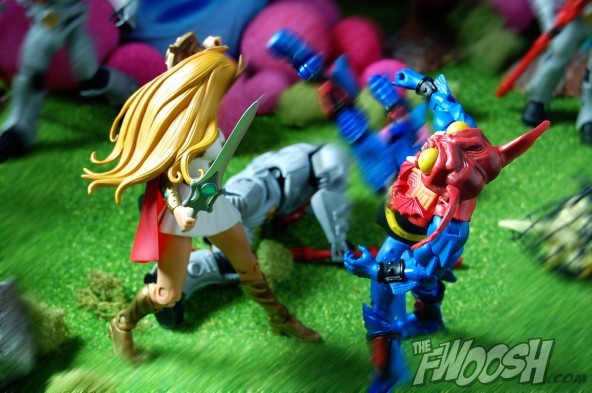 He’s also one of my daughter’s favorites from the show (she always loved the trap door gag). This figure doesn’t really capture that character to me, but it is something amazing of its own and has totally won me over. 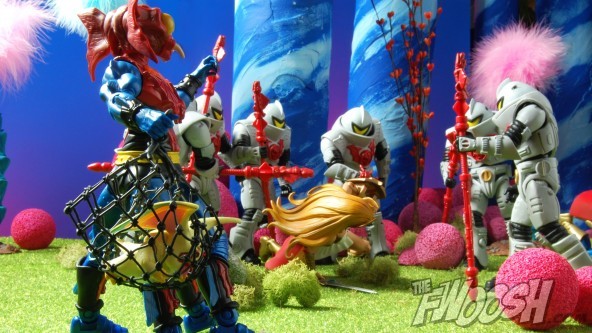 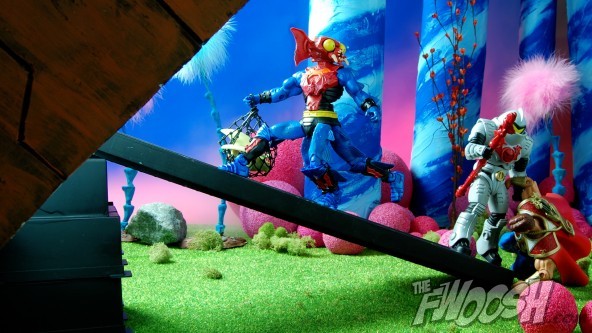 I can’t really picture Hordak dropping this guy through a trap door, but I do see him fitting in better now with Grizzlor and Leech as these monstrous, frightening creatures. This figure looks like a guy who would give She-Ra and her fellow amazons a real fight, and that’s not a bad thing. 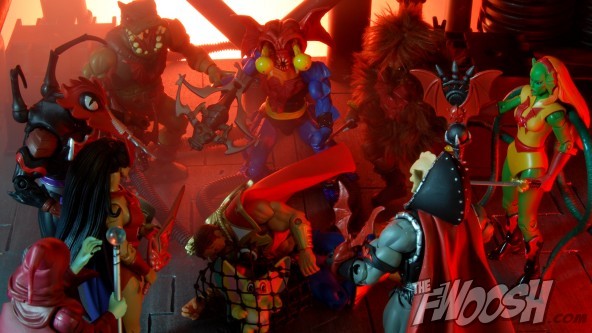 Fortunately, if I really need Mantenna to be his Filmation-y self, I can always try and buy a mod from Kevin Kosse to get that done! 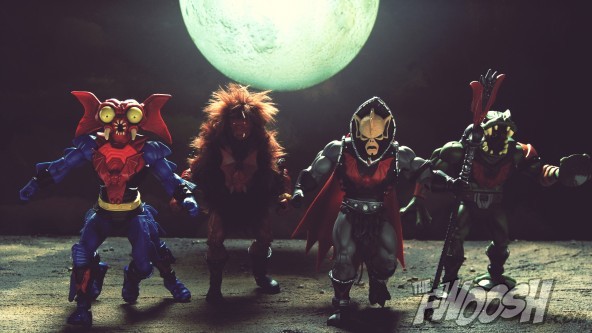