With 2009’s Star Trek, director J. J. Abrams had set a course for the future of the series with a film that thoroughly invigorated what was, up to that point, largely seen as a flagging franchise. References to Star Trek in popular culture had been relegated to jokes about basement-dwelling man-children squinting through coke-bottle glasses, and it was a widely-held stereotype that “Trekkies” (the preferred term is apparently “Trekkers”) just weren’t ‘cool’. Love it or hate it, Star Trek ’09 made the series accessible to the masses and perhaps the sexy young cast, the action sequences and the lens flares were just a way of helping the movie-going public at large let down their collective guards and learning to appreciate this cornerstone of science fiction through new eyes.

With Star Trek Into Darkness, Abrams and his cast and crew continue to blaze a trail through the cinematic cosmos. We begin right in the middle of the action, just as the preceding movie did – only this time, we follow the crew of the Enterprise as they embark on a misadventure on the planet Nibiru. Kirk (Pine) and Bones (Urban) get pursued by angry spear-wielding natives as Sulu (Cho) and Uhura (Saldana) lower Spock (Quinto) into an active volcano on the brink of eruption in order to neutralize it with a cold fusion device. Just another day in the office for them, then.

Kirk and company return to Starfleet Headquarters in San Francisco, where the higher-ups are none too happy about the recklessness they displayed on Nibiru. This is interrupted by a new threat: an unstoppable one-man terror cell who goes by the name of “John Harrison” (Cumberbatch). Kirk leads the crew of the Enterprise in pursuit of Harrison, armed with 72 proton torpedoes and with newbie Dr Carol Marcus (Eve), daughter of Starfleet head Admiral Marcus (Weller), on board. Chief Engineer Scotty (Pegg) is suspicious of the contents of said weapons but his concern is initially unheeded. What follows is a dangerous quest that takes our heroes to the Klingon homeworld of Kronos (or Qo’noS), leading them to the discovery of the torpedoes’ secret payload and the truth behind John Harrison’s beef with Starfleet.

Now, this is how you make a summer blockbuster. A tentpole sci-fi action flick doesn’t have to be two hours of mind-numbing, cacophonous dross. Abrams, along with writers Roberto Orci, Alex Kurtzman, Damon Lindelof and the countless others involved have brought us a film that is fresh, relentlessly exciting and overflowing with white-knuckle action, and none of this at the expense of a compelling story or well-drawn characters. From the very first minute, I was yanked right into this fantastical world. Abrams all but announces “buckle up, because it’s going to be one hell of a ride” – and what a ride Star Trek Into Darkness is.

The Star Trek series has a magnificent legacy and has had an immeasurable impact on the genre, and to chuck all that away for all flash and no substance would be something of a crime. That’s not the case here. Sure, there seems to be barely a minute to stop and catch one’s breath, but that’s probably preferable to a film that drags on and on any day of the week. The film has no shortage of pizazz in the form of stunning visual effects work, witty banter and edge-of-your seat near misses galore. Despite having “darkness” in its title, this flick is far from dour or depressing. References, homages and shout-outs are skilfully weaved into the fabric of the story and some may disagree, but I feel this iteration of Trek actually is very respectful of what went before – just not slavishly so.

One of the many things the first film got right was its casting, with the Enterprise staffed not by a troupe of impressionists, but by actors who got the spirit of the characters they were portraying but weren’t afraid to put a bit of a spin on things. The opening sequence is a brilliant way to reacquaint audiences with the characters without an exposition-heavy recap. We get the sense that these guys are family now, and like any family they have their idiosyncrasies, but they certainly feel more at home on the bridge, in the engineering bay or wherever than they did as fresh faces in the first film.

In this movie, Captain Kirk truly comes into his own as leader of a starship crew and father to his men, Pine further proving there’s more to him than just his handsome mug. Sure, Kirk’s still the brash, womanizing guy we all love (we catch him in bed with two be-tailed alien sisters) but there is character growth to be had. The ever-uneasy friendship between Kirk and Spock also gets a fair amount of play, and there are some great moments between the two, ranging from casual brickbats to a pretty dramatic bit near the end of the film. Quinto conveys Spock’s struggle to get in touch with his human side, his resistance to emotion driving a wedge between him and Uhura, but never hits us over the head with this.

Just as in the earlier film, everyone gets a chance to strut his or her stuff – for example, Sulu even gets to be acting captain. Simon Pegg as Scotty and Karl Urban as Bones in particular stand out in this one, both bringing different brands of comic relief to the proceedings while functioning as far more than merely “the funny guys.” Bones mentions that he once performed a Caesarean on a Gorn and delivered octuplets. It’s a funny bit that’s also a nice nod to the original series.  Speaking of alien species, there’s a tribble which turns out to be integral to the plot. This is also brilliant.

Of course, the attention is square on Benedict Cumberbatch as the villain of the piece. Suffice it to say that fangirls of his (who call themselves “Cumberbitches”) will not be disappointed. The guy is a riveting actor, one who knows when to chew just the right amount of scenery in order to not come off as silly. There has been a spate of more “intellectual” villains in blockbuster movies as of late, but Cumberbatch does enough to differentiate himself from the bunch and Harrison isn’t just all brains and no brawn – he single-handedly takes on a Klingon patrol in one action sequence.

Star Trek Into Darkness is such a thrill that I left the theater kind of breathless, but also really pumped. It’s a big, big movie, but not the kind that’s an extravagant insult to the intellects of audiences everywhere. Abrams has crafted a sequel that ups the game and elicits cheers, laughter, goosebumps, excited fist-pumping and even a tear or two at all the right moments. And isn’t that warp effect just so sparklingly beautiful?

SUMMARY: J. J. Abrams has assembled everything needed for an involving, supremely entertaining big-ticket picture and somehow made it even more than the sum of its parts. It’s such an impressive ship that even Scotty would be jealous. 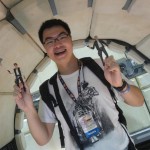