Hawk. If there’s a better code-name for the leader of an anti-terrorist unit, I don’t know what it is. “Hawk” just conjures up this…presence.

Hawk was the Joe team’s blonde-haired field commander before Duke showed up and became the Joe team’s blonde-haired field commander. In a strange turn of events that I still don’t quite understand, Hawk’s hair changed color with his promotion. I guess he was getting older and started finding some gray hairs so he went ahead and dyed it dark. I don’t know. Maybe hair dye comes with the promotion of Colonel to General. Only his hairdresser knows for sure.

Maybe that’s why Colonel Sanders is gray-haired. One day he’ll get a promotion and bam…brunette General Sanders.

Colonel Mustard is gray haired also…Oh yes, I’m on to something. Or on something. Either way, the answers are out there.

Of course this is only talking about the toy. In the comic he remained blonde when he was promoted. So the plot thickens.

It could be hooked to the back of the VAMP or MOBAT and pulled around until the Joes needed some bigass missiles to shoot at the enemy. And Hawk was the guy that pushed the button.

Hawk was up front and center in the action in the comics for a short while, but it wasn’t long before things spread out and evolved and new toys came out and he wasn’t quite the headliner. But then he got something else along with his new hair color. Wardrobe change! Hawk was one of those lucky few that received a brand new look in the 1986. New hair, new clothes, this time around dumping the traditional army greens for a bomber jacket.

Above and beyond the hair-color situation, that bomber jacket added about a metric ton of absolute swank to Hawk’s overall image. It not only put him back on the map, but it garnered him a spot on the cartoon. Hawk was back up front where he belonged, barking orders at everybody and telling the Joes that they sucked, and that he was bringing in Sgt. Slaughter to whip them back into fighting shape.

Over and over I will say that the Joe designers of the 80s were ablaze with the very inferno of design brilliance, and Hawk’s upgraded look was no exception. While I have an infinite amount of love for the Original 13 looks, it’s very hard to not conclude that Hawk’s V2 upgrade is definitive for him. Maybe it’s the leather jacket. Snake Eyes gets a lot of attention for his V2 look, with the ninja aesthetic having become something of a default for him, but Hawk pulled off something even bolder. It wasn’t just a black to black shift; it was a complete change, and it was damn good. It’s hard to hear the words “Hawk from GI Joe” and not have his V2 look be the first thing you think of. Zap is always going to be in the green. Stalker is always going to have the camo. Rock N Roll might have had a pretty good V2 look, but default in my head is the Original Green. But Hawk? That 1986 bomber jacket look is hard to argue with.

V2 was the first Hawk I had. I never had the Mobile Missile System (I don’t remember seeing it in stores) so it would be a few years before I would have a Hawk figure. In keeping with my “file card is default,” I always left his helmet on. If the file card had depicted him without a helmet, he would have been forever without, but the file card had him helmeted, so helmeted he stayed. With the helmet off he feels incomplete. That helmet is like The Dude’s rug; it really ties the entire look together. 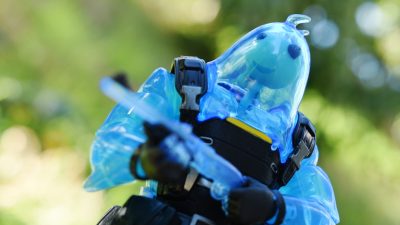 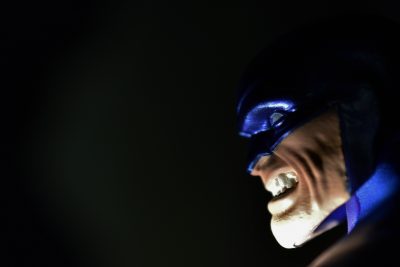