If the current Transformers comics by IDW have done anything right, it’s been breathing new life into a few key Beast Wars characters. This, in turn, has netted us new, updated versions of beloved characters like Waspinator, and it’s finally provided us with awesome, fully realized plastic interpretations of characters like Rhinox, who, until now, has never had a figure that has done him justice. Continuing this most welcome trend is the release of this new figure based on one of the most fondly remembered Beast Wars characters: Rattrap.

If you’re familiar with Beast Wars, then you know it’s difficult to pick a favorite among the Axelon crew, but Rattrap is certainly a contender for that distinction. Now, the original Rattrap figures in the Beast Wars line were not bad figures by any means, especially the Transmetal figure, so even if an updated figure were never produced, what we have is still pretty OK, but Hasbro managed to generate a good amount of excitement when they first unveiled promo images of this new figure. Instantly, Rattrap shot right to the top of my list of possibilities for “figure of the year,” and there was no way I could get my mitts on him fast enough. So how does he fare? Let’s find out!


Rattrap’s packaging is the same as every other Generations deluxe-class figure from the “Thrilling 30” line. The bubble displays him front and center against the backdrop of a comic with a custom cover that features the character as prominently as can be. I love seeing Beast Wars characters in the major toy aisles — that will never get old for me.

The comic included is an issue from the Dark Cybertron crossover event, and I’m not sure if this is the case with just my copy, but the pages are all horribly out of order. The first page can be found near the end, and the rest seem to be placed randomly throughout, almost as though William Burroughs was manning the printing press.  Hopefully this isn’t a widespread problem with the issue, so people can, you know, actually read it and understand it. 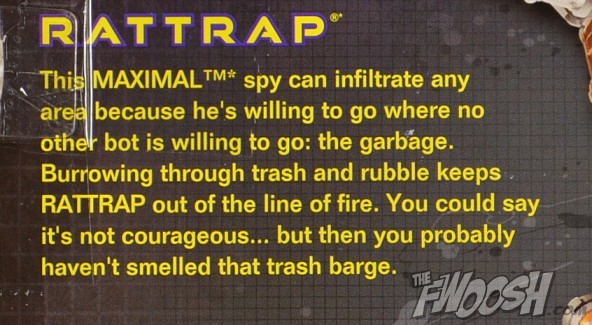 I like that his bio doesn’t really link him to the events of the recent comics. That gives you the option to see him as an updated addition to the Beast Wars collection, or he can be added to the ever-growing roster of figures based on the IDW comics. I’ve added him to my IDW shelves because I think his size works better there, but it’s really going to depend on your preferences.


Rattrap is a gorgeous figure — from the front. The sculpt is excellent and it totally captures the spirit of the character. When viewed from the side and back, however, it becomes very clear that he is a “shell-former.” He carries a backpack that doesn’t integrate very well into his ‘bot mode, but in order to create a convincing alt mode for a character like Rattrap who transforms into a fuzzy rodent, I’m not sure what could have been done differently. Any other option would likely result in a jigsaw-puzzle effect, which would certainly compromise the alt mode’s effectiveness. 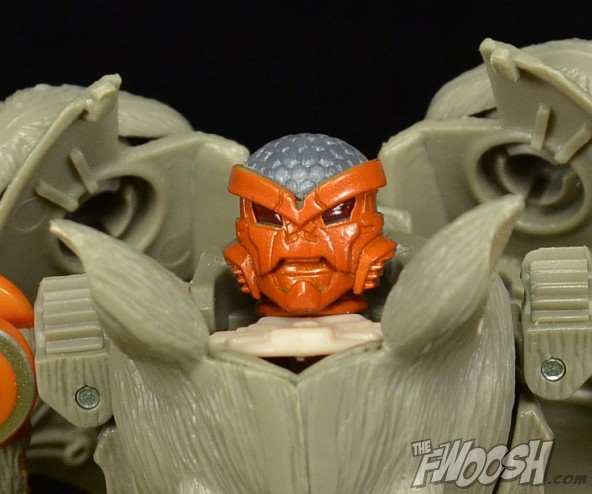 His head sculpt is just fantastic. Now, there’s not a whole lot of paint detail there, but the sculpt itself is excellent, and I can hear his distinctive voice in my head each time I look at him (for some reason he’s always telling off Dinobot). His “exposed brain” on the top of his head is part of the light-piping gimmick that will make his eyes glow red if light hits it just right. It’s nice to see the light-pipping effect incorporated into the sculpt in such an organic way, rather than randomly having a piece of colored translucent plastic on the back of the figure’s head. 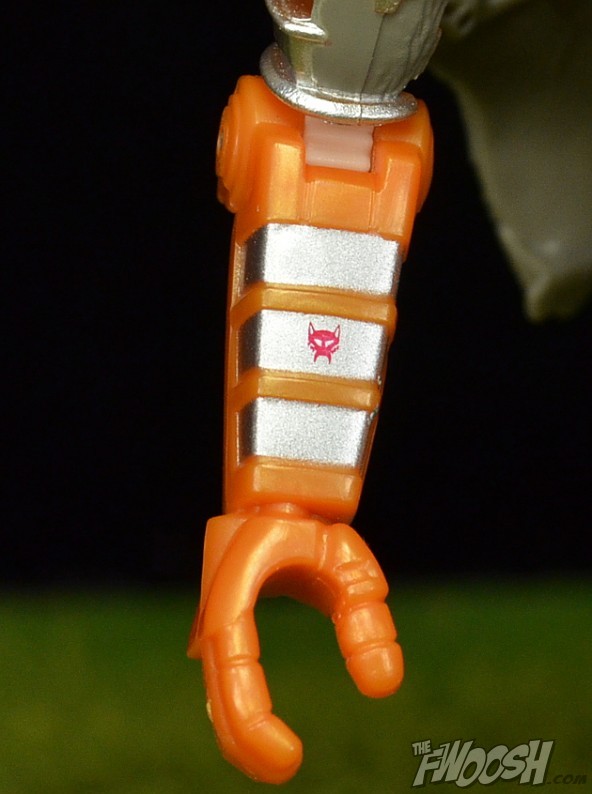 There may not be a ton of paint detailing, but he’s got it where it counts. One of the first things you’ll notice is the tiny Maximal sigils on each of his forearms. It’s amazing they look as true to the actual logo as they do because you almost need a magnifying glass to make them out completely. I love it. 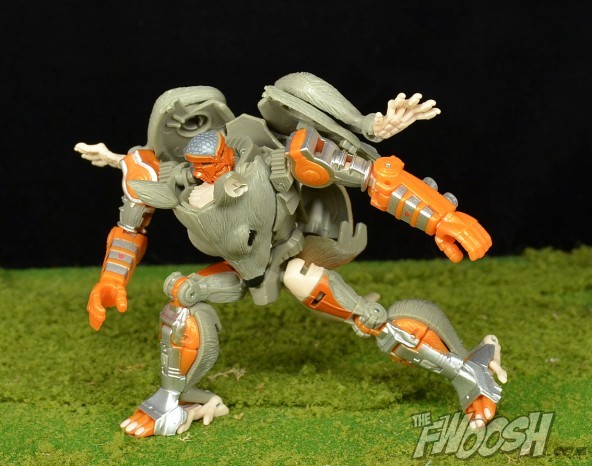 As far as articulation goes in his ‘bot mode, he does OK, but certain points of articulation are a bit limited. His elbows can’t reach a full 90-degree bend, and his shell does get in the way of his shoulders at times. He’s also missing any meaningful ankle articulation, but that’s due to his transformation. But what’s really annoying is his lack of a wrist swivel. It looks as though his hands should be able to turn at the wrists, but they do not. His hip and knee articulation are great, however. They move easily and there’s a good range of motion. He can still get in some good poses, but not as many as you may prefer.


At a glance, his only accessory is a blaster that’s cast in translucent plastic. I’m not sure why it’s translucent, but I like the look of it. It can be separated into two smaller guns, which then resembles the original figure’s weapon. Keeping them separated works a bit better because he can be posed in a more natural way with the guns held individually. With the rifle, it’s tough to pose him in a way that makes sense and looks natural since his lack of wrist swivels prevent any cool two-handed poses.
But his blaster is not his only accessory — he also comes with a detonator that is hidden (though not really) in a secret compartment in his left forearm. I thought it was a a pair of binoculars at first, which is pretty random, but the detonator is way cooler. 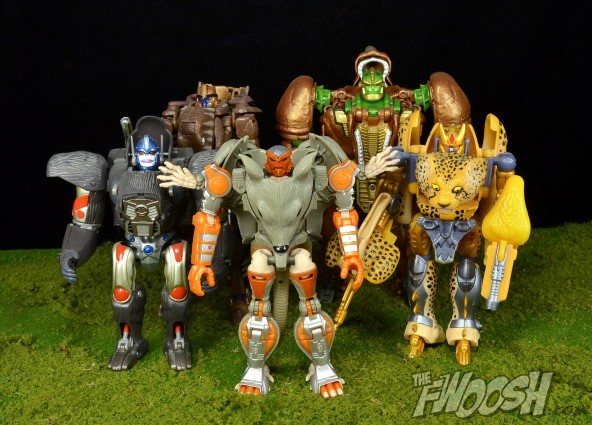 Assembling The Axelon crew with this new Rattrap was my first priority as soon as I got him opened, but I’m not convinced he’s a good fit for my Beast Wars shelf because of his size. Releasing this particular version of Rattrap as a deluxe class figure was an unexpected move in the first place, so I can’t help but wonder if he wouldn’t have been a better fit for the new legends class line, the one that gave us Swerve and Tailgate. Having a season 1 Rattrap that’s taller than my Optimus Primal isn’t ideal, so my original Beast Wars Rattrap will likely stay in this display while the new one finds a home on the IDW shelf. 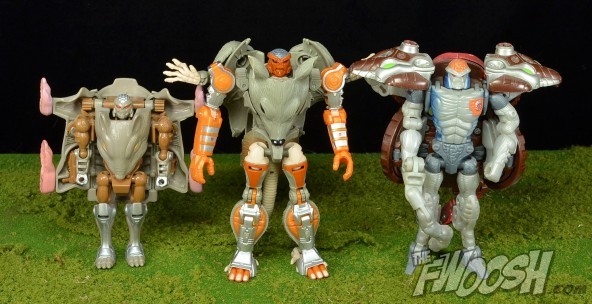 Seeing the new Rattrap posed with the original and Transmetal Beast Wars figures highlights the advances in the new figure’s sculpt, which, in turn, highlights what Hasbro can do for classic characters in 2014. Both of the older figures were great for their time, even the original with his auto-transform gimmick, and I used to think the Transmetal figure was as good a Rattrap figure as we’d ever get, but this new one is a clear improvement over both. 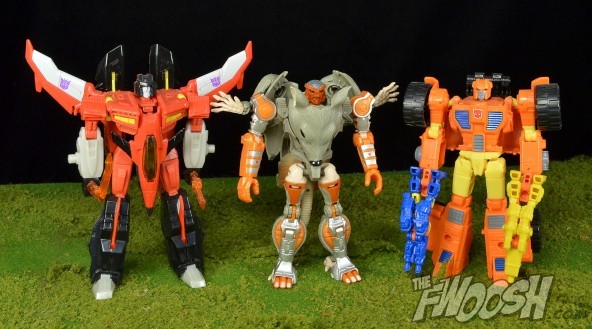 He looks to be a better fit here with some of his fellow IDW characters, but his size still isn’t ideal. All the current deluxes seem to be of a similar size, but I dig seeing Rattrap displayed with Starscream and Scoop.

Now, with regards to his transformation, I’ve transformed him a couple times by this point, and while it’s seemingly not all that complicated a transformation, it’s certainly one of the more aggravating I’ve encountered in some time. He’s essentially a shell-former with all his robot bits stuffed up inside his rat shell, but all the robot bits have to be perfectly aligned in order for this to work, and it’s a very tight, not-intuitive-at-all arrangement. Parts compete for valuable space, and it can feel like there’s no way it’s going to come all together. After a good deal of fiddling, it will eventually work, but it can be a frustrating process.

Once the transformation is complete, Rattrap’s rat mode looks great, but despite his transforming into an “organic” alt mode, he doesn’t have any more articulation in this mode than the average Autobot car. His rat legs don’t move very freely, particularly his hind legs, and his front legs tend to pop off when move. But what’s cool is his tail — it’s a bendable tail that will hold most poses due to a wire housed inside the rubber casing. There’s also a hinge at the base of it that allows for more dramatic positioning.


His rat mode looks nice and convincing from almost every angle. Where it falls short is his belly — there’s nothing there concealing all the robot parts housed within, so if you pose him sitting up, like in the pics below, his robot guts are plainly visible. But I love that he can be posed sitting up. He has a little “hood” that can be rotated behind his rat head in this pose to cover his ‘bot head — it seems that piece was made just for this pose. Unfortunately, he only looks good like this from the side or from the back, but it’s still cool.

So is this Generations Rattrap figure figure-of-the-year material? Maybe, but probably not. I found his transformation far too irritating and his rat mode not quite satisfying enough to keep it in the running for any end-of-year accolades, but I do think he’s a cool figure worthy of anyone’s Transformers collection. His ‘bot mode makes him worth it and should look great in almost any display, though he does seem to be better suited for a modern, more IDW-centric display.

I got my figure from Big Bad Toy Store, but he should be popping up at retail very soon. If you see him out in the wild, grab him — I’d love to see the Beast Wars figures continue to do well so we can get more updates in the near future. (Voyager Dinobot! Please, Hasbro!)