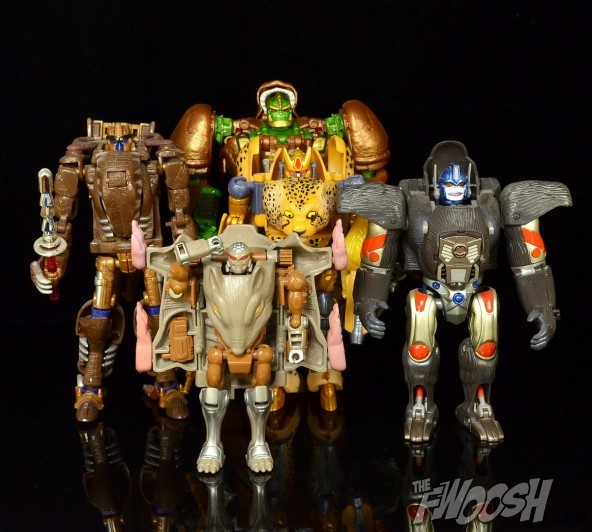 Throughout the entire 30-year history of The Transformers, no single group of characters makes me feel as giddy as the original Axelon crew from the first season of the Beast Wars series. The original Lost Light crew is a close runner-up, but I reserve an enormous amount of affection for the Axelon crew. Transformers fans who have not given Beast Wars a chance are truly missing out on some of the most endearing characters the brand has given us. Not only that, but Beast Wars literally saved the brand after it was basically dead in the water in the mid-’90s. Optimus Primal, Cheetor, Dinobot, Rhinox, and Rattrap were all instrumental in giving The Transformers a second wind, one it desperately needed. Without them, it’s not unreasonable to believe the line would be nothing more than just another forgotten relic that thrived in the ’80s, but then went nowhere (Sectaurs, anyone?).

With this in mind, it’s been a joy to see Hasbro and Takara releasing new versions of some of the classic Beast Wars characters in the current Generations line. Rhinox and Waspinator have enjoyed absolutely fantastic modern updates, and in a few weeks an updated Rattrap should be hitting the pegs. In celebration of that new Rattrap’s imminent release, today’s installment of “Throwback Thursday” features the original Rattrap figure from 1996.

Now, even though this figure may be from 1996, it didn’t come into my possession  until a few years ago. When Beast Wars was happening, I had very different priorities, so I wasn’t introduced to the line until earlier this decade. I had definitely been missing out, I quickly learned, so I pieced together a Beast Wars collection with the quickness, and they’ve become some of my favorite action figures of all time.

Rattrap here was one I had some difficulty in tracking down. Complete, intact figures were hard to come by at the time, so I got lucky on eBay and found one in fantastic condition for not too terrible a price.

The sculpt here is not an elegant one, but what’s cool about the figure itself is the transforming gimmick it’s built upon. It’s a one-step transformation, basically, and all you have to do is lift up his rat head over his ‘bot head and the rest of his limbs and parts follow suit to form his rat form. It’s actually pretty cool. It saddles his ‘bot mode with tons of kibble, though, so it’s not a perfect design by any means.

In profile and from the back he’s pretty hard to look at. The rat feet and rat panels are way too prominent. Still, he’s miles ahead of what we saw in G1, and many of the innovations from the Beast Wars figures are still with us to this day. Note his ball-jointed shoulders and hips, for example. 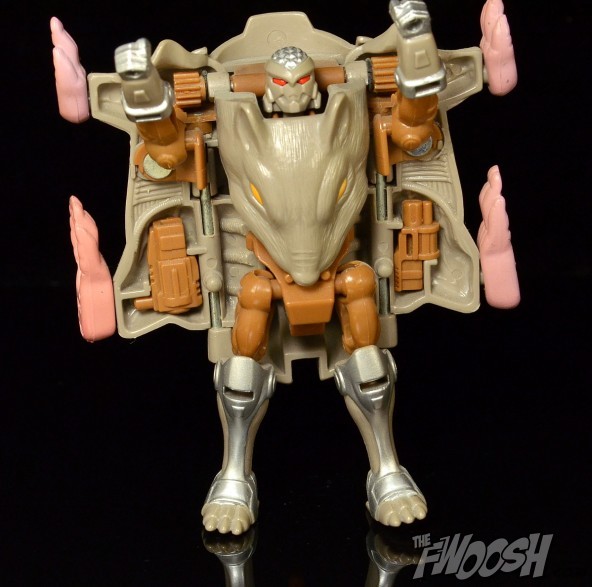 His weapon can be split in half and stored inside his rat panels. This is a cool feature that makes him all-inclusive, so adding any parts to a storage container with a jillion loose weapons and parts isn’t necessary. 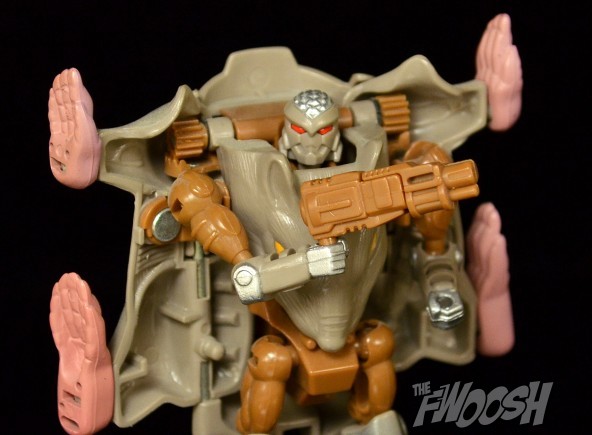 Thanks to his ball-jointed… everything… action poses are easy to pull off. The trick, however, is getting him to stand in those action poses — that big rat backpack is heavy and awkward, so it takes some creative posing to get him to remain standing in anything other than a simple vanilla pose. 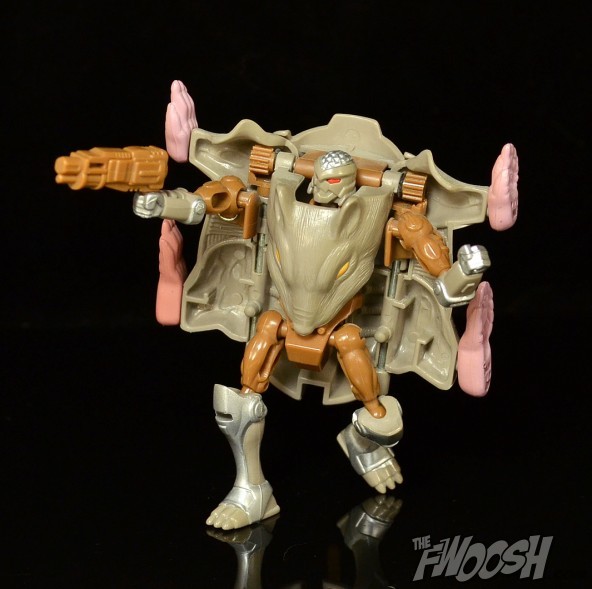 Action poses can work, though, but it takes a lot of patience. 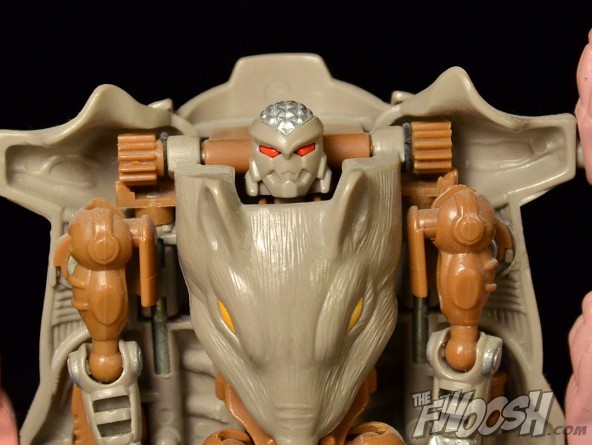 Rattrap’s head sculpt is a bit on the small and simple side, but it is a decent enough match to the character from the series. There isn’t a ton of detail or paint apps, but it’s unmistakably “Rattrap.” 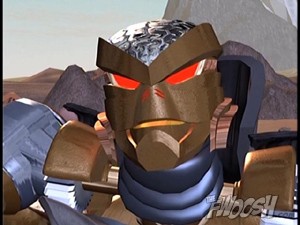 My only real complaint is I would have loved to see his rat feet integrate into his ‘bot mode in a way that wasn’t as weird and obtrusive. As they are, they’re pretty distracting. But given the transformation gimmick, I suppose their prominence is a necessary evil in this case. 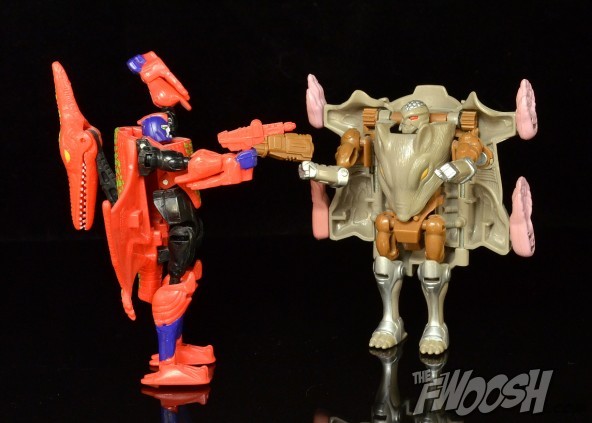 Rattrap’s beast mode is fun, though it isn’t necessarily in scale with anything. The Beast Wars toys may have corrected and built upon many of the shortcomings of G1 and G2, but scale was still an issue. So what we have here is basically a giant rat, at least in comparison to any other Transformer figure. 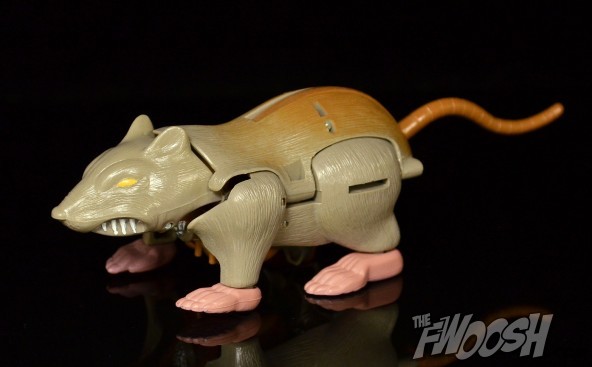 Aside from a joint in his tail, there is no articulation to speak of in his beast mode. It looks OK, but that’s about all it has going for it. It’s a good figure for a Transformer from ’96, but it’s still a far cry from what we’re seeing today, so the prospect of a new Rattrap is an exciting one. I can’t wait to see what improvements have been made.

Rattrap is an essential part of any Beast Wars collection, but if nostalgia isn’t your thing, then you’re probably better off waiting for the new Generations figure to come out in a few weeks than trying to hunt down a vintage figure. I love mine and am overjoyed to have him in my collection, but I fully understand that this isn’t a figure for everyone. Still, if you don’t have a Rattrap in your Transformers collection, you pretty much need a Rattrap of some sort.