The name was Atlas Comics, but it came to be known as Vengeance, Incorporated.

The brainchild of Marvel Comics founder and one-time owner Martin Goodman, Atlas was created with the sole purpose of running Goodman’s former company into the ground. In 1970, Goodman sold Marvel to Cadence Industries with the proviso that his son, Chip, would be given the job of Marvel’s editorial director. But Goodman’s own nephew, Stanley Leiber (better known to comics readers as Stan Lee) had other ideas, firing Chip and taking the position for himself. The elder Goodman, furious at this subterfuge, decided to use his his lifetime of experience and personal contacts (along with his now-considerable wealth) to create a new publishing company that would crush Lee and Marvel for their temerity.

It was early 1974 and Goodman’s plan seemed sound. He would hire away Marvel’s best freelancers, enticing them to join his company with promises of creative control, higher page rates, returned artwork, as well as ownership of any characters that were created for the company. Neither Marvel or DC offered anything like these incentives at the time, making the proposition of working for the fledgling Atlas an enticing one. Soon, Atlas had a Bullpen to rival Marvel’s own: Neal Adams, Howard Chaykin, Walt Simonson, Ernie Colón, Terry Austin, Gerry Conway, Frank Thorne, Archie Goodwin, Steve Ditko, and Stan Lee’s own brother Larry Leiber all numbered among the new company’s employees. Under editor Jeff Rovin, Atlas Comics was primed and made ready for its debut.

Not content to simply raid Marvel for talent, Goodman chose to steal his former company’s ideas as well. If he could no longer publish The Amazing Spider-Man, The Incredible Hulk, or Conan the Barbarian, then Goodman would publish the Tarantula, the Brute, and Wulf the Barbarian instead. The characters were just different enough to avoid litigation, while similar enough that the publisher’s intent could not be missed. Goodman also sought “inspiration” from popular films like Planet of the Apes, Enter the Dragon, and Death Wish, as well as television shows like Kung Fu and Kolchak: the Night-Stalker. Atlas books with titles like Planet of the Vampires, the Hands of the Dragon, and The Cougar were created in short order. The rest of the Atlas line would be padded out with genre evergreens like war (Sgt. Striker’s Death Squad), horror (Tales of Evil), western (Kid Cody and the Comanche Kid), and Archie-style teen humor comics. To the average observer, there was little surface difference between Marvel and Atlas comics. Hell, even the logos looked similar!

The content beneath the covers was another matter entirely. The quality varied from title to title (and often issue to issue) with some strong books out of the gate (Howard Chaykin’s the Scorpion, Dave Fleisher and Mike Sekowsky’s Ironjaw, and Rich Buckler’s Demon Hunter), some junk (Son of Dracula, Tippy Teen reprints), and a bunch of so-so product stuck squarely in the middle. It wasn’t that those books were bad, but Goodman was never going to dethrone Marvel or even DC publishing stuff like The Destructor or Police Action featuring Lomax, NYPD, and Luke Malone, Manhunter. The sales numbers reflected this grim reality soon enough. In spite of almost overwhelmingly positive industry buzz, a stable of top-notch creators and Goodman’s own lifetime of experience as a publisher, his books were falling flat. That is, when they were not outright returned.

When it became clear that the line was stiffing, many news agents sent their unopened bundles of Atlas books directly back to their distributors for credit. The books were then stripped of their covers and bundled three for a quarter, selling through drug and grocery stores. This drove faltering sales straight into the ground, but it also proved an entry-point for those just coming into the Atlas story, namely a five-year-old Anthill impatiently waiting for his mother to finish work for the night. After devouring the “good” comics in the bag (there were always two Marvel books front-to-back, with a “lesser” publisher sandwiched between them so you didn’t know what you were getting), I turned my attention to the leftover, the Atlas Comic John Targitt, Man-Stalker! The art (“by NOSTRAND”) was raw, almost ugly compared to my usual diet of Buscema, Andru, and Romita Sr. That said, there was also an undeniable grit and power to the work. In spite of myself, I was sucked into the book, breathlessly reading it while the family car idled beneath a streetlight. Then I got to these three panels:

I was floored. Being five years old, I had never seen anything so visceral before. Unlike my uncles and cousins, who had been weened on monster magazines and EC Comics, I was as unprepared as the above security guard. Atlas Comics grabbed me by the throat that night in 1975, although it would take me more than a decade to figure out what I had read. Y’see, my original copy was lost shortly after I read it, leaving me with nothing but memories of the above panels and a vague sense of unease. It wouldn’t be until I began hunting through those old dollar boxes at my LCS that I re-discovered what had shocked me years before. But that is getting ahead of the story. 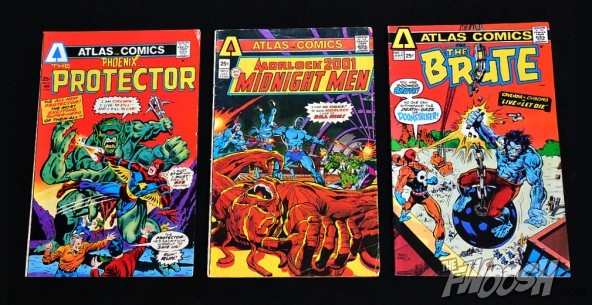 Desperate to steer his company into profitable waters, in the spring of 1975 Goodman implemented what would become known as the “third-issue switch.” Convinced his books would sell better if they were “more like Marvel,” Goodman scrapped storylines and entire creative teams overnight, demanding his once well-courted creators to rework their characters and storylines to resemble the competition. For most books, this occurred with the third issue, irritating creators and confusing readers alike. Howard Chaykin’s swashbuckling Scorpion got a superhero makeover and a hearty dose of Marvel-style self-loathing. The wonderfully weird Morlock 2001 was made an ensemble book by killing the title character off while introducing a crew of interchangeable mutant “Midnight Men.” Other books were simply cancelled, so if you were one of the 12 people who cared about what happened to the Man-Monster, you’re still wondering 40 years later. 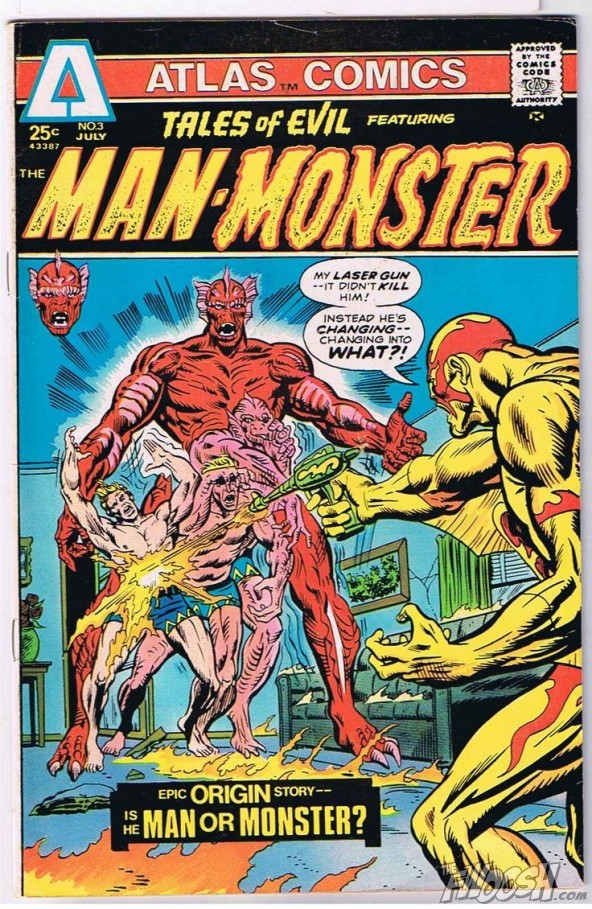 Atlas was unable to stop the bleeding and eventually Goodman decided to throw in the towel on Vengeance, Inc. The entirety of the Atlas Comics line was abruptly cancelled in late summer, 1975. Many in the Atlas bullpen returned to Marvel — after all, the two businesses were only one city block apart. By the end of the year, Atlas was nothing but a memory. All that remained of the final Goodman empire was a sleezy “gentleman’s magazine” entitled Swank, which the erstwhile Chip edited (without interference from Stan Lee) until his death at 55. Goodman retired to Florida, passing away quietly in the late 1980s. Creators like Chaykin and Buckler were able to re-purpose their creations Scorpion and Demon Hunter for Marvel as Dominic Fortune and Devil-Slayer, respectively. As for the others? Aside from a short-lived attempt in 2011 to revive the line, Atlas has remained a dollar bin curiosity, a bit of trivia for the die-hards. While characters never stay dead in comics, the creations of Atlas seem content to sleep within their long-boxes. Only time will tell if they rise again. 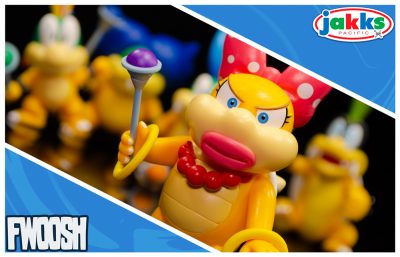 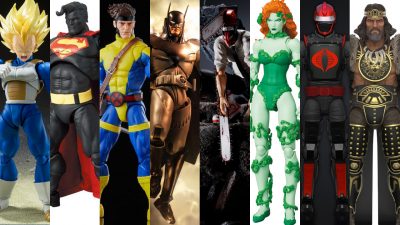 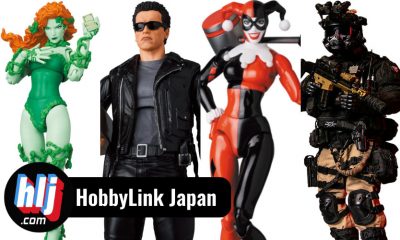