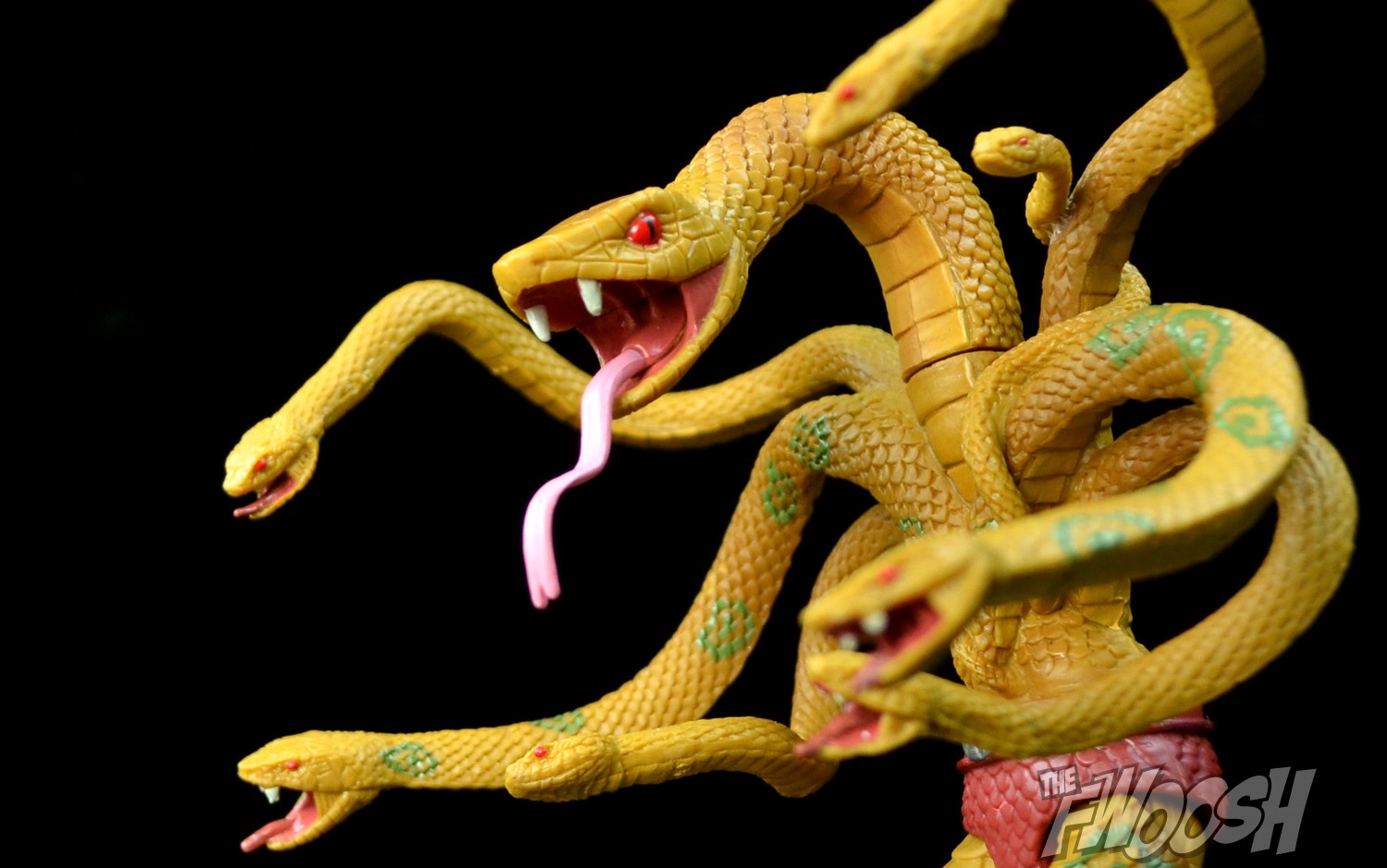 As the new Serpentine King Hssss begins arriving on the doorsteps of 2015 subscribers, we are coming to the end of the a long road as curved and twisted as the snakes that make up this dreadful, disguised leader of the Snake Men.

As you probably know, Masters of the Universe Classics is still chugging along (much to my joy), and even though 2016 is a bit of a departure from what we have known in the past, we are still getting new characters in the line, and the overall expanse of the collection is getting more and more impressive. While this year will see mostly unique characters who have not had a chance to get a Classics figure yet, this new iteration of King Hssss is obviously a different take on a high-profile character, and this version’s origins were driven primarily by the need to get his upper body released to fans. As odd as that sounds in a “boiled down” description, the accompanying history is even stranger, so if you have been paying attention for the past several months, I am sure you are well aware of the challenges that were faced to bring this part-of-a-figure to life.

If you have not been in the loop, I can just say that this piece was supposed to be included in the 2015 subscription in some form or another, and I suspect it was meant to accompany Buzz Saw Hordak. However, that did not happen due to a mix-up with transition of the “old old” guard to the “old” guard, but that old guard looked for a way to get it to market. Are you still following me?

Anyway, instead of just releasing a disembodied ball of snakes, the old team decided to give the upper torso some legs, weapons, and an additional head to justify a full release. While the fact that you now had to pay for something that may have been original painted as “included” in 2015 did not sit well with some, the path to actually getting this cool new Hssss form was laid out. Now, after some delay (probably due to the transition from the “old” guard to the “new” guard), this new “Serpentine” form of Hssss is available to subscribers. Whew. Okay, are you up to speed now?

Good, so now we can talk about what you are getting with this release, and, honestly, I actually really like most of it. Not that there was going to be a reason for me *not* to like this, but after all of the noise and history, I was ready to be apathetic about it by now. However, there is no denying how dynamic this figure is (especially the upper half), and while you do have to pay for it, we have not seen the likes of a $20 price tag in this line for a very long time, so that made the decision to buy one pretty easy for me. Plus, the new pieces in this set help to settle some of the internal conflicts I have had with King Hssss since the 1980s.

First and foremost, we have known that this new Earl Norem-inspired snake form was impressive since its debut at SDCC 2014, and in hand it does NOT disappoint. I mean, I was not such a hater of the original snake form that came with the vintage version of the Classics King Hssss, but this makes that one completely irrelevant. The detail is absolutely fantastic (as you would expect from the Four Horsemen), and the integration of the bendable feature into the upped number of snake appendages makes this dude totally intimidating. The previous version just wasn’t a threatening presence for the horrid form of the most powerful Snake Man, so this one really does foot the bill. This was ripped right from that Norem source material, and if you want to display either of your previous Hssss legs with this one, they will look great.

However, this figure does literally stand on its own because there are new legs included with this release. These are mostly a rehash of the Snake Men/Rattlor legs, but painted to match the pattern of the upper body. These obviously look fine for snake guy, and you can totally see these being the gams underneath Hssss’s green pants, so it really does work. That is not to say that it is kind of weird looking at them with the same red shorts from the previous release, because, really, it looks like he is running around in his underwear. If you can get your head passed that (I mean, more than half of these He-Man guys do the same thing), or if you are like me, you are using this figure as the ultimate Snake Men warrior/weapon, then it works just fine. So, I am not sure if most people are going to use this as a unique character like I am, but that brings me to the extra head included in this release… 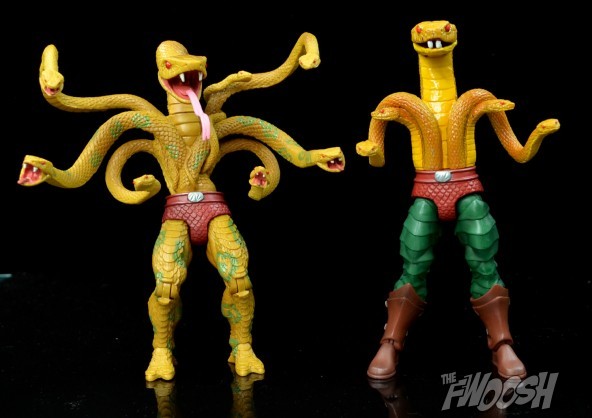 See, I have never been a fan how King Hssss’s snake form has been portrayed. I love the idea of a giant snake monster, but the fact that he was one guy that was made up bunch of other snakes never sat well with me for some reason. So I have ALWAYS displayed Hssss in his disguised form, but with this new snake head, I can display a bit of the snake form while still keeping the single entity intact. I know there is mythological precedence for his snake form, but my OCD just never really allowed for it. Plus, since we know the Snake Men were created by some pretty sick experimentation and gene-splicing, as their leader, maybe Hssss was one of the first Snake Men created, so he is still very much an amalgamation of both snake and man. 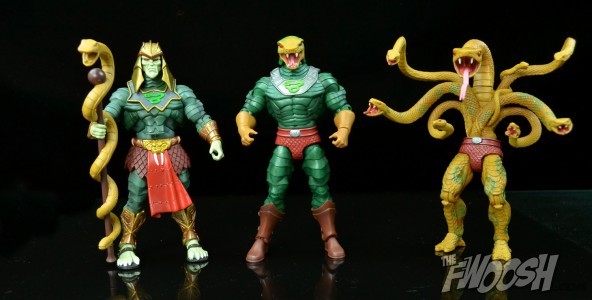 Anyway, it makes sense to me, and it gives me a great excuse to display both forms as different characters on my shelf. I do want to mention that this head does have one production issue — it is seemingly made out of harder ABS rather than the standard, softer PVC plastic used on most of the MOTUC heads. That means getting the head on the peg of either of the older Hssss figures is an absolute b**ch, and I actually had to shave the plastic to make the peg hole bigger. It works fine now, but I strongly caution you as try to put this head on a figure.

Finally, you also get four weapons with this release, and if you own the old Snake Men two-pack, you will recognize them. The sword, shield, mace, and spear were all released there, but this time we get them in a more lead-like metal and green deco. I think this scheme is actually cool, and it works better for me for the Snake Men than the previous version. Thus, I am using these are the ultimate historical snake weapons, and all the rest are mere copies of these stronger and more dangerous versions. Maybe these are imbued with snake venom to make every strike deadly or something. That could be cool.

Hey, this was a long time coming, and while it was not included during 2015 (hence the card back bio), I am glad we finally got this release because the new snake form is really, really cool. The additional pieces afford me the chance to expand my character roster, and for those of you keeping this form as King Hssss, this is a viable new variation on the feared snake leader. Production came through pretty perfectly on the main torso piece (the big CHINA stamp on the neck is gone), and aside from the other head being cast in ABS, I have no nits to pick with this release.

Right now, this is only available in a special shop set up for 2015 subscribers, but if there are any left at the end of the month, it will get a wide release in the regular Matty Collector shop. If you want one, I would suggest not waiting because, like all things MOTUC, they eventually sell out, and I do not see this one returning. 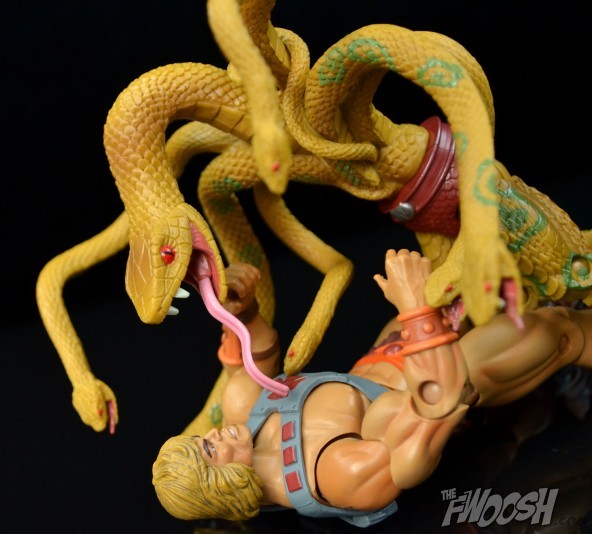 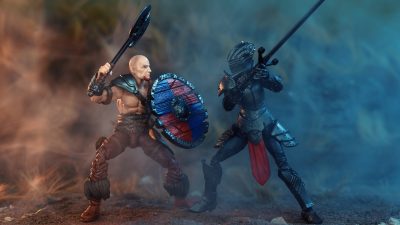