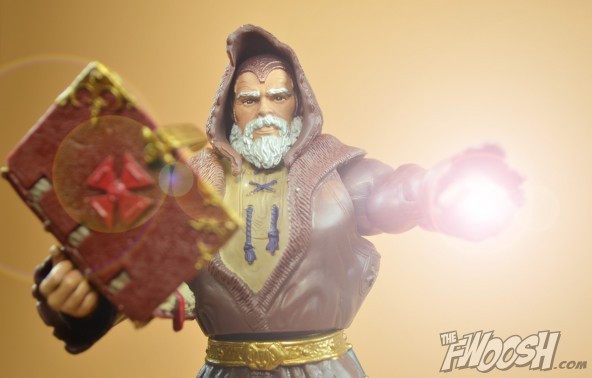 By the Powers of Grayskull, Mattel is bringing the distant past to the very near future.

I know we are all in a bit of a hangover after the annual Comic Con slap to the senses, but the biggest nerd dance of the year cannot stop the train of monthly Masters of the Universe Classics releases. Yesterday we brought you a First Look at Club Etheria’s Madame Razz (shipping this month), but we are jumping to the opposite end of the spectrum for today’s offering.  While Madame found her origin in the fairytale world of Etheria via Filmation, Eldor was created for the next iteration of the vintage Masters of the Universe toy line that would have taken us to the rugged past of Eternia. So, like so many times before, Classics is reaching into the literal and figurative past to bring this mentor of He-Ro into our modern times.

For a quick and dirty history lesson, when the vintage MOTU line was folding back in 1987-88, Mattel came up with the idea of sending the story to the savage past of Eternia (commonly referred to as Preternia) to tell the stories of a new champion: He-Ro (The Most Power Wizard in the Universe). He-Ro (who was brought to MOTU Classics back in 2009) was to go up against King Hssss and the Snake Men with the help of new “Masters,” most notably, Eldor. Unfortunately, that concept never got off the ground before MOTU crashed and burned, Eldor never made it past the prototype stage, and it all became a thing of action figure legend for over 20 years.

Fast-forward to 2008 and it was easy to see that the inaugural Classics figure, King Grayskull, was dipping into the Preternia legend of long ago. The first “He-Man,” the mighty king teamed up with He-Ro to harness the power bequeathed by the Overlords of Trolla and to fight off those pesky Snake Men. He-Ro would arrive one year later at SDCC 2009 to much celebration, and he filled one of those voids that had been chased by MOTU fans for years. Since He-Ro became reality with his integration into Classics, many fans suspected they would not have to wait long for that other Powers of Grayskull figure to never make it past the test shot phase, Eldor. So we waited. And waited. And waited.

Technically, we are still waiting since Eldor will not be released until October, but his announcement at SDCC brought a collective sigh of relief to most Masters fans. I personally love getting figures of characters that never made it to actual production, and, as a prototype, Eldor always appealed to me more than He-Ro. Despite being leaked early via some sketchy avenues in Asia, getting Eldor in his final form is still a rush and he puts a nice capper on the “Big Three” of Preternia. Overall, I find this Classics figure to be a decent success, but let’s take a closer peek at what this wizened wizard has to offer.

As you know, when a character that had a vintage MOTU figure is brought into the Classics line, it is generally translated point for point within the new aesthetic, or it is revitalized and taken beyond anything it ever was before. Since Eldor had a prototype that could be used for reference, he technically falls into this category, and as far as translation goes, the Four Horsemen definitely amped him up in terms of detail. I say Four Horsemen, but it is obvious from the get-go that Eldor is the work of Djordje, the proclaimed “Fifth Horsemen,” who has been bringing his talents to the Classics line since Tri-Klops was released all the way back in 2009.

Right away that fact should tell you that Eldor would be destined to be a very detailed figure, especially in the “sculptural” sense. Djordje tends to embellish costumes and weapons a bit more with sculpted detail, a trait that generally has a lot of success with the Classics collecting community. I find that his sculpts can be very successful in the general aesthetic of the in the case of characters like Bow and Tri-Klops, but sometimes the technique tests the limits of what I would call the “Classics look” with characters like Frosta and Marzo. That is just a personal preference and is most certainly not a comment on the skill and outcome of the work (which is amazing), but I do think that Classics has a very distinct style and I am a stickler for cohesion of aesthetic within a particular line. So, that being said, I think Eldor’s design takes that look to the very limit, but does so in a very visually interesting fashion.

If you compare the prototype of Eldor to his Classics figure, you can see right away that the old take was used simply as the foundation for this new incarnation. This is a different approach from a straight-up upgrade (like, say, with Beast Man), so when a character gets this treatment, it can be a little unpredictable, but exciting at the same time. Eldor has lots of new elements to his costume, like drawstrings for his hood, detailing on his sleeves and a belt chocked full of all kinds of neat little implements, as well heightened details, like fraying at his sleeves and boots and texturing on his hood. Oh, and did you catch the Ram Stone belt buckle? NEAT! This interpretive line is the kind of thing that divides the fandom, but I think I am split down the middle this time around: I really dig the added pieces like the drawstrings and tool belt, but some of the fraying looks a little too worn to my eyes. Again, though, it is all a matter of person opinion.

His hood will probably be the biggest article of discussion as he arrives on doorsteps in the coming months, but I think that will have less to do with the sculpt and more to do with the final engineering of the figure. First and foremost, like many that came before him, his patented hood is not as formfitting as it probably could/should be. It looks a like a breeze caught it and is blowing some wind between the hood and his head. It is certainly not as apparent as the early production reject made it out to be, but it still doesn’t look complete natural. The other issue is that there is a rumor that Eldor was originally supposed to ship with two different “jackets” – one with the hood up, another with the hood down. Most likely due to cost, these were combined and you can see where the “up” hood was added as a separate piece, and the “down” hood” is still present on the back of the figure. I suppose it still works to some degree as additional folds of a larger hood, but it still looks a little strange. If you are looking at him from the front, this is a non-issue, but it does impact the side and back views to some degree. 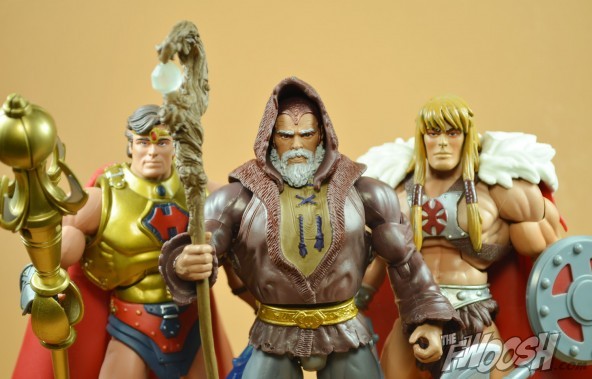 What I absolutely love about the figure, though, is the head sculpt. Djordje knocked this one into the stratosphere and created on of the most interesting faces in the entire line, especially for a human character. Eldor looks like an old sagely wizard, and on first glance, there is no mistaking it. He has a lot lines in his face to show his age and his beard long and white without going into “Gandalf” territory. It is funny, his face kind of looks like an aged-up version of Horseman Eric Treadaway, but I might be seeing things. A nice surprise is that Eldor is wearing a copper-colored skull cap that elicits memories of Merlin from Excalibur. This a fantastic touch that brings a lot of character to the figure, so when I found it that the cap was also present in the old figure, I bowled me right over. It is so cool to learn new things about a history that is decades old.

Included with Eldor is the the Staff of (you guessed it) Elders, his Book of Living Spells, and a sticker sheet. The staff of the Elders is a Filmation artifact that has been upgraded for Classics and tied PERFECTLY to this character. I really love the look of it and it feels like something out of deep Eternian lore, so it is very fitting. The Book of Living Spells was Eldor’s claim to fame from his vintage incarnation, and as an action figure tome, it looks great. It is worn and beaten but emblazoned with the iron cross and symbol of He-Ro, along with several embellishments, like a buckle and spine detail. The book does open, but while I was expecting a recreation of the hologram feature, or even some printed historical detail, the inside pages are blank, even if they are denoted by his book mark. I even ran the book under some water to see if there was a disappearing ink feature or some such, but to no avail. I know it is a small thing, but it would have been cool to have the book be an Easter egg accessory with some hidden information. 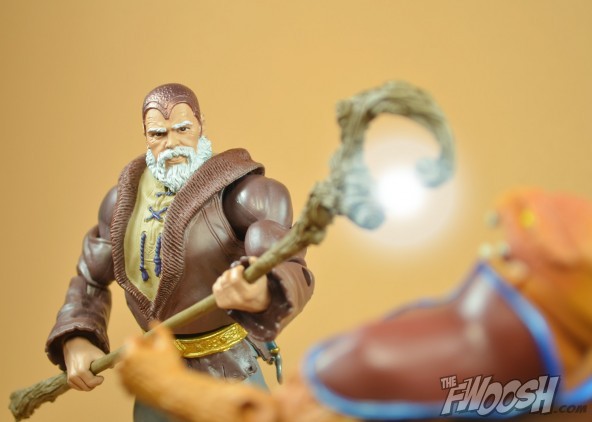 The final “accessory” included with Eldor is an all-new sticker sheet and for the first time ever we get faction  “logos” for the Heroic and Evil Warriors. This might not be a huge deal to some, but I LOVE this since just about every other major faction has been enjoying them for some time now. I find both to be very appropriate in both color and form, and I really like the integration of the Havoc Staff in the Evil Warriors motif. I use these stickers on my display shelves so having the (arguably) two most important factions with their sigils is very important to me. 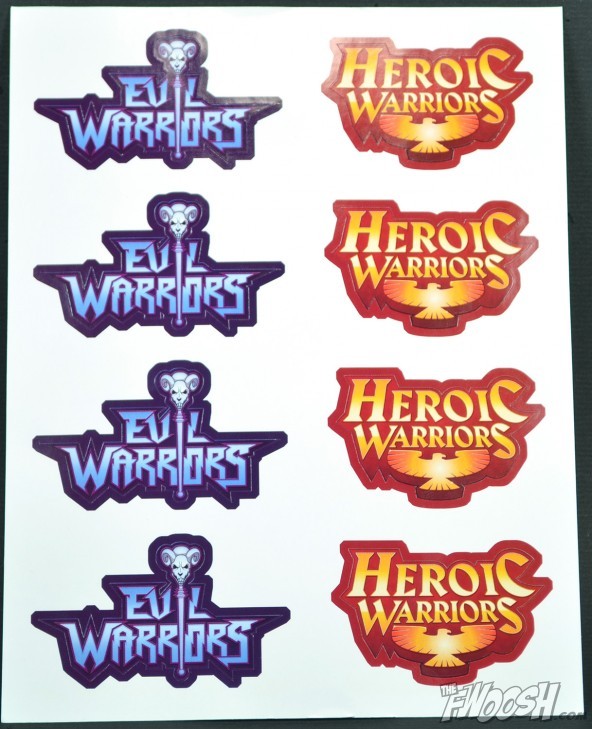 Out of the fictional and factual past, Eldor FINALLY takes his official place in the pantheon of Masters of the Universe, and we finally have our archetypal wizard. The He-Ro/Gray character has his mentor, and the history of Preternia just got more interesting. The figure certainly has some very strong points, like the head sculpt and the Staff of the Elders, but I wish the hood could have been engineered just a little bit better. So, while I think most of the fandom will be unanimous in their celebration of finally getting an Eldor figure, his interpretation might divide some. Personally, I think he looks great with He-Ro, King Grayskull, Battle Lion, and Sir Laser-Lot and filling in Preternia is always a treat. Focus now falls to Veena in terms of the Powers of Grayskull era, so hopefully we won’t be waiting on her long. She won’t stand a chance if 2015 doesn’t happen, though – so go sign up for Club Eternia at Matty Collector.

*Thanks to the Elders at Mattel for sending Eldor along for a First Look. We will take another sharp turn tomorrow with another MOTU Classics preview! 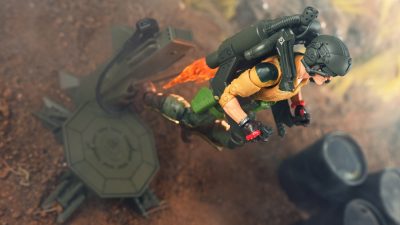 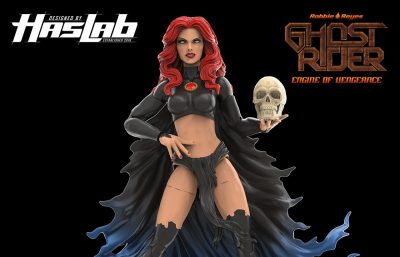 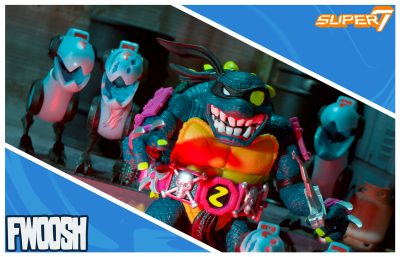 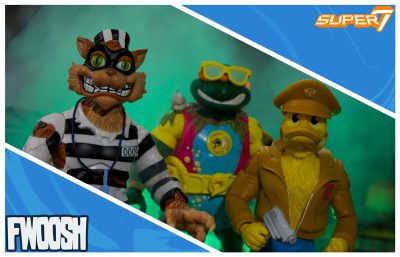