Who doesn’t love a droid? Well, a lot of people are bitching about the Black Series Artoo, but who knows what’s up with those people. But droids form the backbone and the cornerstone of the Star Wars universe. I’m not going to go with the obvious because the obvious are obvious. Obviously! That include R5-D4 (the poor little droid that blew his top when Luke tried to buy him, thus changing the fate of the galaxy), IG-88, 4-LOM, FX-7, and 2-1B. Those should not even be in doubt because they’re all super-necessary characters that every collection needs.

I will be focusing on other droids, some that may not shine as brightly, others that don’t have the star quality of IG-88, who would enjoy unbelievable amounts of groupies if he had working man-parts.

Let’s start off with one I think has a good chance and go on from there. 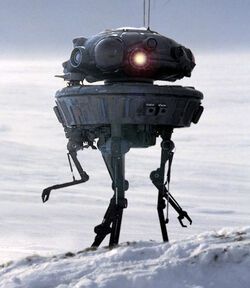 OK, this list starts off with a creep droid and moves on from there. if you were a certain age when you first saw Empire, then maybe you can commiserate. But this thing was creepy. First, there’s that noise it makes. This whirring, humming, wobbly sound that felt cold and detached. And then it was the way it hovered, with those freaky arms outstretched. There was just nothing right about that thing. It felt evil and dangerous. Freaks me right the heck out. But anyway, this one is a necessity, although it only really showed up to blow up. And yes, that was a rhyme you can take home to yo momma. 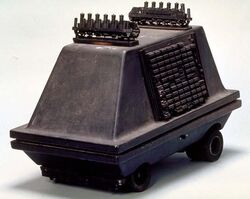 I include this one because it’s the easiest pack-in for someone like Chewbacca or Tarkin or someone who needs something a little extra. They skittered around the floor of the Death Star and are probably the least essential Droid ever… or were they? Who knows what type of really, really important stuff they did?

Yes, I know, I know — there’s probably an entire legion of Expanded Universe books that have been written about the brave exploits of the Mouse Droids. But my point is, they’re the cutest little droids ever, and I would not turn down one as a pack-in. So, Hasbro, make that happen.

Jeez, you creepy mechanical freak show. Yet another droid that traumatized me as a kid. I never know what’s going on when people rag on Return of the Jedi. First, Jabba’s Palace (original version, without the extra muppets) was awesome, and second, the Emperor. But most important was freaky sadistic droid torture starring Captain scaryvoice himself. I know it turned all cute and cuddly with Ewok’s later (who were going to eat our heroes, don’t forget. You always forget that, but seriously. They were going to cook Han and Luke), but it started out like a prolonged nightmare, with this skeletal thing and then a droid getting pulled apart and it was all just wrong. Also known as the Gonk Droid — because it gonked. Of course, that may actually be an insult to them. It can’t help it if it gonks. But yeah, it’s shaped like a toaster and it’s squat and kind of wobbles around and stuff, but the Power Droid has become a mythic thing that has surpassed its humble beginnings. Either that or it’s just cool looking. Some things just don’t need explanation. You either get the gonk or you don’t. Hell, pack the Mouse Droid with the Gonk Droid. It’s like a Dr. Seuss story. If Dr. Seuss was really high. Which he may have been.

And finally, the most terrifying Droid of them all: It’s like if C-3PO, Darth Vader, and aluminum foil had a kid together. As a droid-happy kid, the Death Star Droid was the coolest-looking thing ever. Silver, with these big black eyes … and it had death in its name. I was a morbid kid, but that shot of it above all other robot-looking figures put it at the top of the food chain. My only regret was that he never did anything in the movies. I wanted to see him do something. Something badass and cool befitting a Droid that had the Death Star in its name, like kill somebody really horrifically.  But he didn’t do anything. Neither did IG-88, for that matter, and he’s my second-favorite Droid. That was always kind of a letdown, but I guess that’s what comes from getting the toys before you see the movie. I wanted each toy to get a spotlight moment to shine, but they were a lot of background characters who came and went.