A Letter to Santa by Ibentmyman-thing and snowman

How have you been this year? It’s been pretty busy here, and I’m pretty sure I’ve been good … if you don’t count that mix-up with the spraypaint and old man Vickers’ Shaving cream. So if I end up on the naughty list because of that, please update my files on account of Vickers forgave me. As soon as his face returned to its natural color, that is …

Anyway, I know you probably get a lot of letters this time of year asking for a lot of stuff, so I figured I’d give you a break from the endless gimme gimme gimme and just share with you what we’ve been up to. 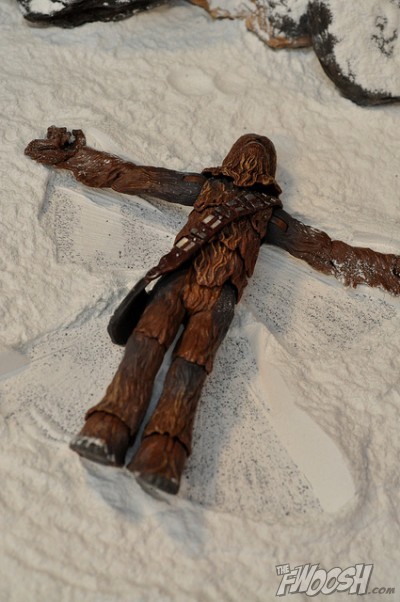 Chewbacca doesn’t know a lot about Christmas, but he really got excited when he heard Grandma say something about “Christmas Wookiees.” We didn’t have the heart to tell him that she said “cookies.” Take a look at this shot we took after Chewie tried to get into the Christmas spirit! Now you see why we didn’t correct him. Han said he was making a snow Jedi. Damp Wookiee smells about like you’d imagine. 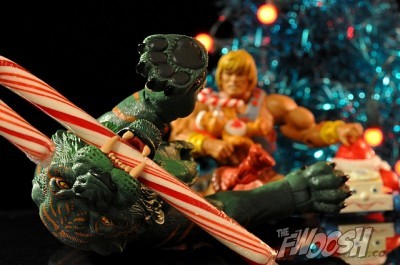 Battle Cat really showed off his inner Cringer when we started decorating the tree. His breath has smelled great for the past three days now, so we can’t stay too mad at him. 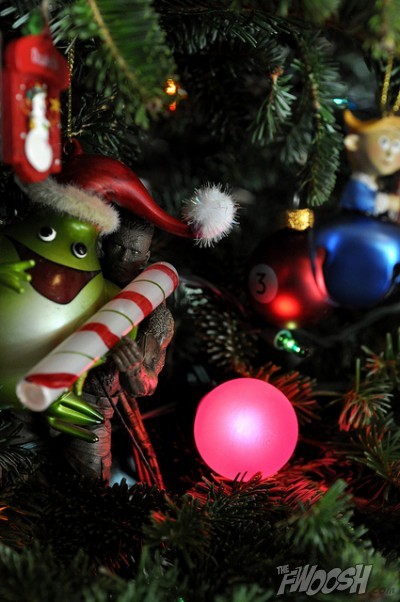 It was two days after the office Christmas party before we realized Dutch never went home. He had been doing pretty good — he was a temp, but it was steady work, and we knew there was going to be trouble when we brought the tree in. A few cups of some spiked eggnog and he started looking at the Christmas tree as if something was hiding in it. “Billy said it was in the trees,” is all he said, and then he dove in. Oh well, poor fella. 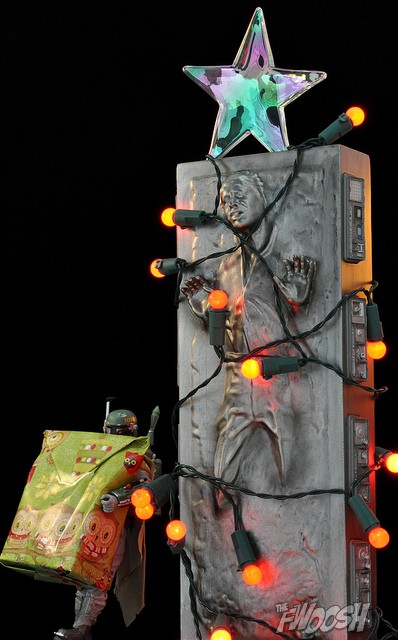 Boy, was Han mad when he saw Boba Fett’s Christmas tree. He was even madder when he saw what Boba got him — a small personal heater and a bottle of Robitussin in case he came down with hibernation sickness again. That guy’s some practical joker! 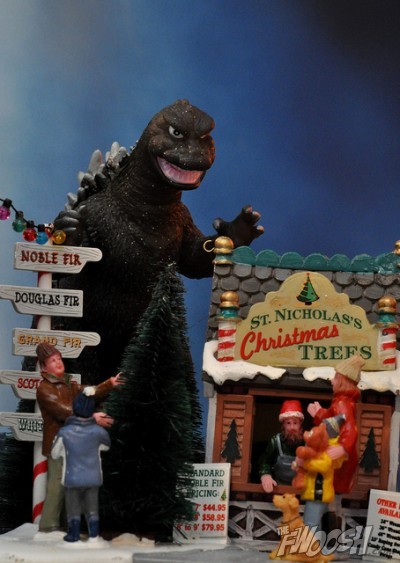 It’s usually pretty calm around here, but Christmas really brings out all the crazies. This was taken right before Godzilla sneezed. Oh well, hope everybody already got their tree this year! 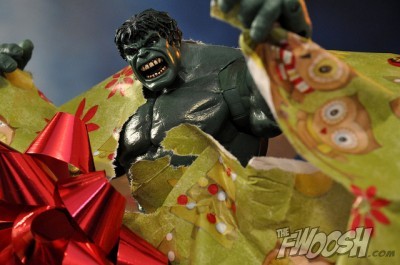 Thor emailed us this picture of Loki opening his Christmas present — or rather his Christmas present opening itself for him! The card attached read “From Tony Stark. We had a Hulk, now you have one too!” Apparently shortly after this Hulk sat in Odin’s lap and asked him for a ponycycle. I don’t know what that is either. 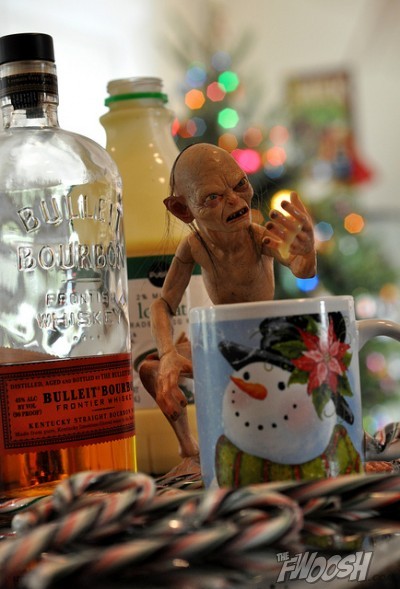 Gollum starts calling EVERYONE “precious” after a few cups of holiday cheer. There’s always one! 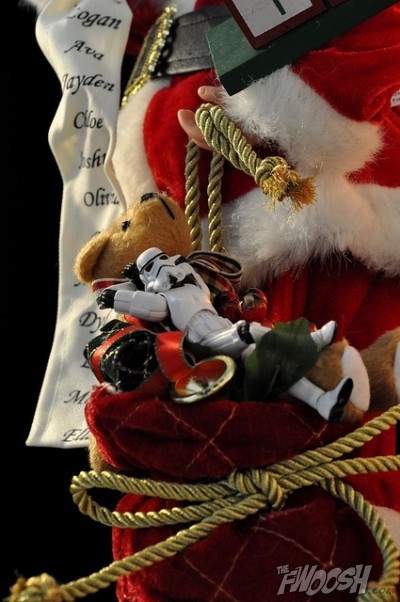 We found this guy snoring his head off right after the tree was decorated. He thought he had gotten out of work before we told him there was still the yard to decorate. I wish we had been able to see his face once we broke out the lawn reindeer! 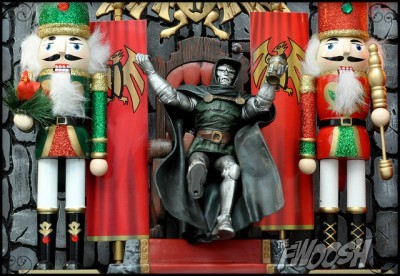 Dr. Doom overindulged again this year.  We didn’t have the heart to tell him that the cider wasn’t even hard. He seemed to be enjoying himself, though — you should hear his version of “The Twelve Days of Christmas.” “Five dead Thiiiiiings, four dead Sues, three dead Johnnys two dead HERBIES … and Reed Richards’ head on a piiiiiike!” He really has a lovely singing voice. 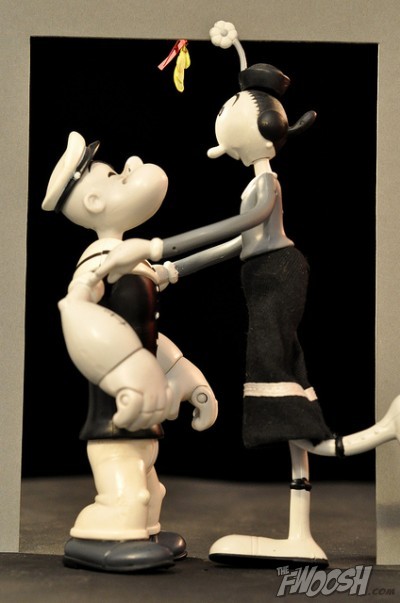 Uncle Mitch got this sweet shot just before Popeye tried to eat the mistletoe. He mistook it for spinach. “Well blow me down,” he said right after he spit it out. Olive Oyle immediately started flirting with Bluto, and … well, there was a whole thing afterwards that I won’t go into. 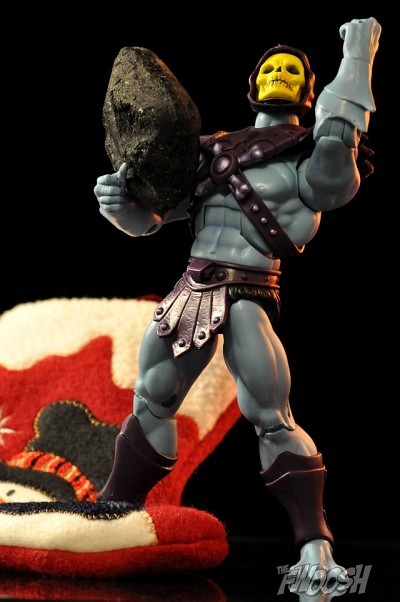 Ten years in a row. Skeletor said his next quest was to find the fabled “naughty list” and find a way to cross his name off. The funny thing is, after he leaves, He-Man just crushes the coal into a diamond, and we have a good laugh. All Skeletor had to do was ask. He’ll never learn. 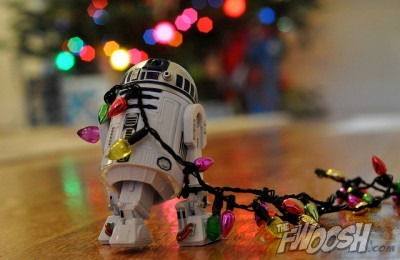 According to Threepio, this was Artoo’s attempt at pimping his ride. Unfortunately the lights were still connected to the tree … 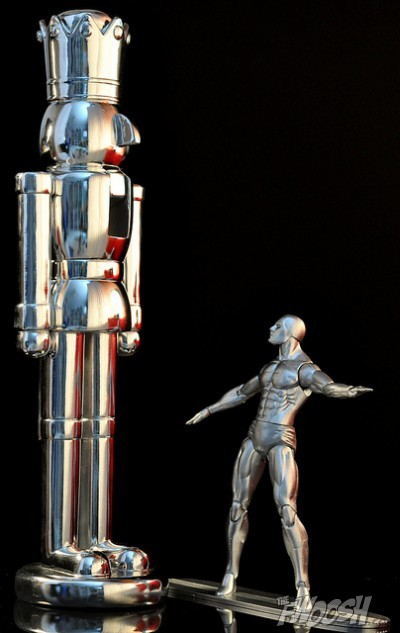 Here’s the Silver Surfer in the Christmas play. He was playing the Herald Angel. 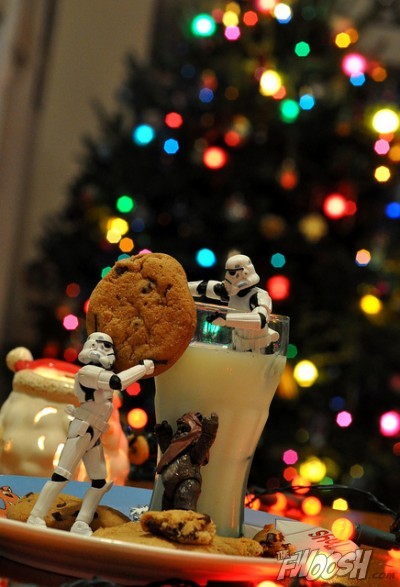 Who says Stormtroopers are heartless? We found Wicket passed out in a bed of crumbs with a milk mustache about an hour after this picture. Apparently “nyub nyub” is Ewok for chocolate chip. 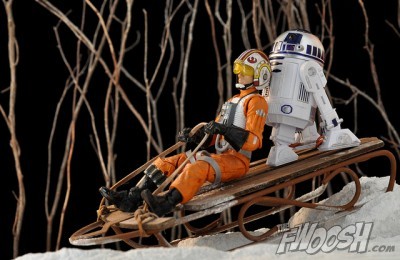 And finally, here’s Luke trying out his new sled on Hoth Hill after a late Christmas snow. The last thing we heard before he was out of earshot was “I’m not steering, I thought you were steering!”
Well, that’s all for now Santa. As you can see, we like to have some fun around here during the holidays. Hope your Christmas isn’t too busy. Say hello to Mrs. Claus for us all.
Merry Christmas!