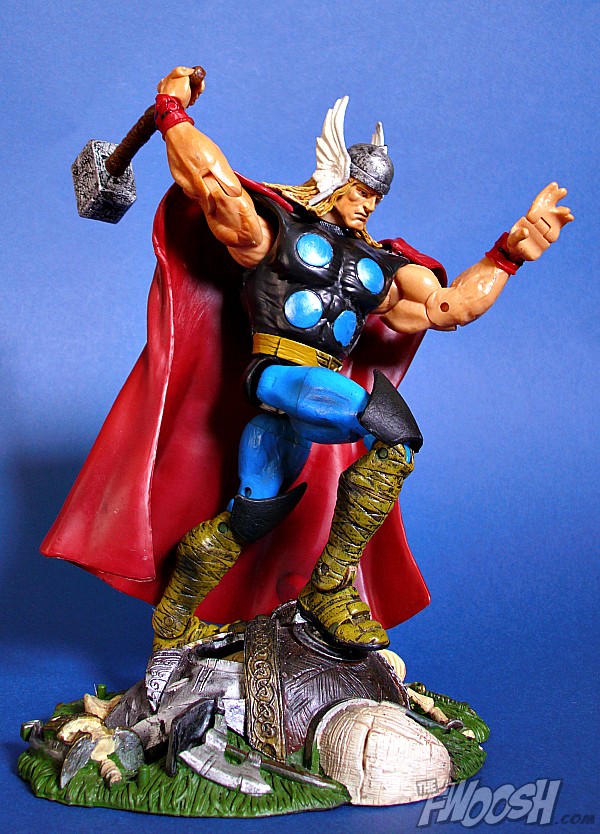 Certain figures just take me back. Case in point: Thor. I found this guy at one of my favorite mall haunts, the late, lamented Suncoast Video. Marvel Legends wave three had just hit, but I’d only seen it in the pages of Toyfare magazine. When I noticed Thor hanging on the pegs I practically dived for the plastic clamshell, lest another desperate collector beat me to it. I managed to buy the figure without incident and opened him on the bench outside of the store — I couldn’t help myself. At the time, finding a new Marvel Legends figure on the pegs was like hitting the lottery on Christmas day. The fact that the figure was Thor was icing on my Santa/money cake. 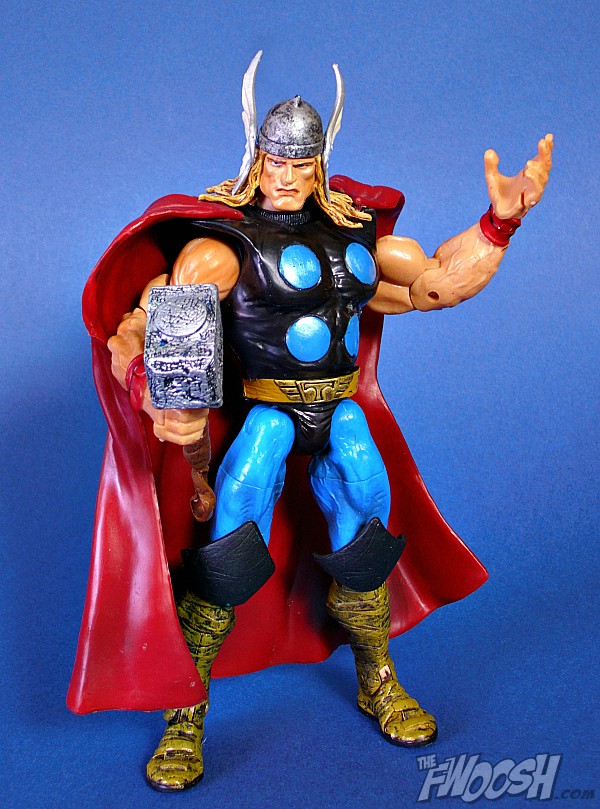 Marvel Legends was a remarkable line, surpassing collector expectations of just what action figures could be. There were no concessions made to the average consumer, no “action features” or asinine non-continuity neon costumes. The line didn’t depend on movie or cartoon tie-ins, it was unapologetically tailored to the longtime Marvel comics reader. ToyBiz understood collectors were waiting cash in hand for a classic Thor with 31 points of articulation, and they were happy to provide it. But how does their offering hold up today?

He’s actually okay. Yes, that fact he looks like Arnold Schwarzenegger is distracting, and the stupid hinge in his hands means he can’t hold onto his rassa-frassin’ hammer, but aside from that, he’s pretty good. This isn’t letting nostalgia cloud my judgement, it’s taking this figure for what it is, and it is a decent enough representation of Thor. 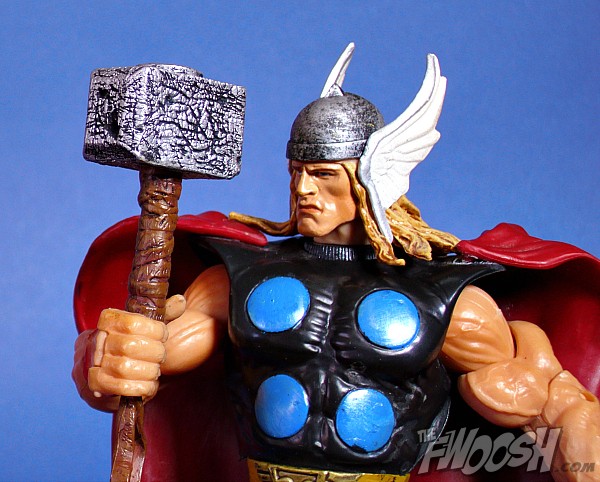 Governator or no, the figure has an appropriately stern expression on his face. Kudos to sculptor Dave Cortez for avoiding the angry open mouth Thor could have easily been stuck with. Cartoonish expressions of rage are much easier from a design standpoint than the showing of restraint, but the furrowed brow and dour expression seen here are much more effective choices. Make no mistake, this guy is pissed — he just doesn’t need to show his uvula to express it. 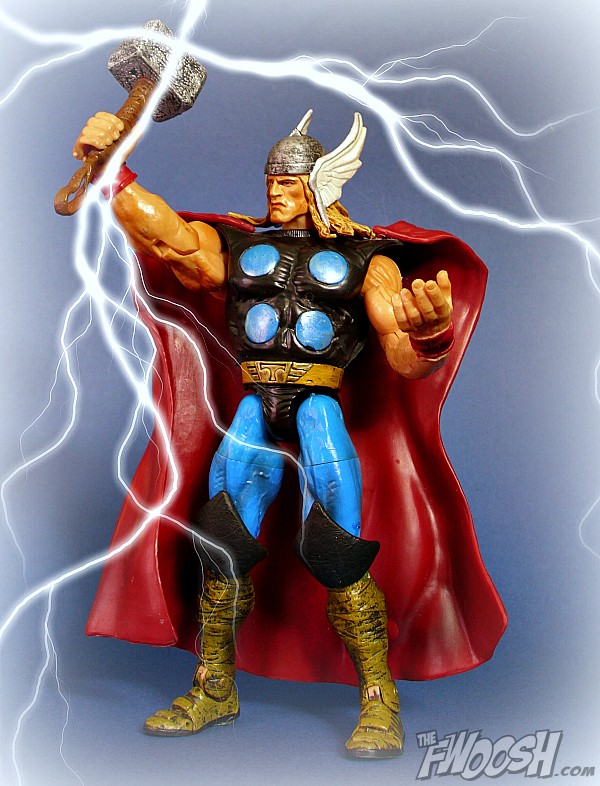 The body has a decent amount of mass to it. The torso, reused from an old ToyBiz WCW Hak figure, sports a rubber overlay to add further bulk, as well as the Thunder-God’s iconic chest disks. ToyBiz missed the bottom two on his trunks, so whoops, I guess. Areas like the belt and boots are slightly crude, but still appropriately Thor-like. The helmet is decent enough, but the wings seem off. The angle which they’re attached is wrong, plus they sit a touch on the low side. 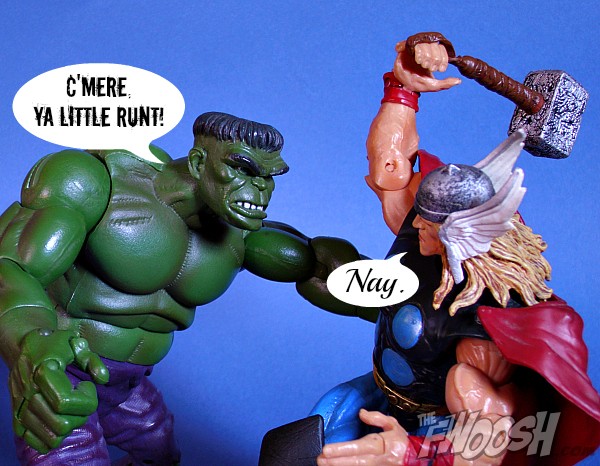 Mjölnir is appropriately chunky and hammer-like. Its surface is rougher than usually depicted, looking more like weathered stone than Uru metal. The strap fits in his opened hand nicely, to replicate more accurate hammer-tossin’ poses. This was the most articulated Thor figure to date, but there were issues. Thor’s head is ball-jointed, but there’s very little range of motion due to his thick shelf of hair. Then there’s his arms: due to the construction, they angle away from the torso, preventing them from hanging normally at the figure’s sides. 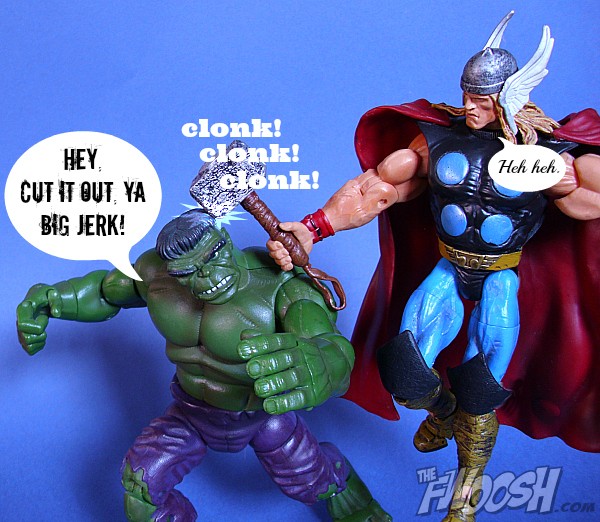 Areas like the hinge at the elbow have limited mobility due to the joint’s cut-in nature; combined with the arm’s positioning, and you have a Thunder God who always appears to be in mid-flex. No wonder he looks so ornery. Along with the ball-jointed head, Thor has a pegged neck, waist, biceps, and wrists, with pin-and-socket shoulders, and hinged elbows and fingers. His upper legs are pin-hinges above a thigh cut, with double-jointed knees, rocker joints in the hinged ankle. Oh, and hinged toes. 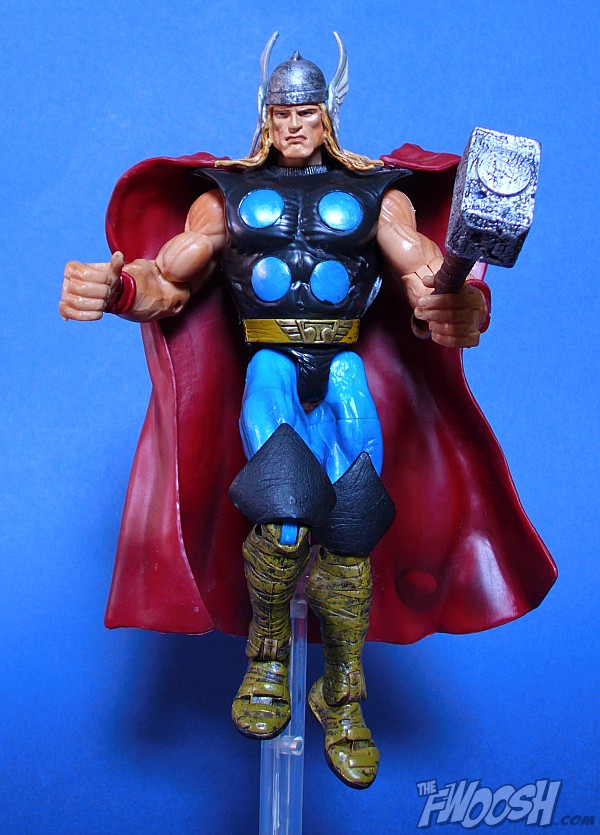 Thor’s paintwork is hit or miss. The metallic paint on his chest-disks is thick and sloppy, and the yellow used on the belt is thin and prone to flaking. Areas like the belt and the boot-straps receive a black wash to bring out the detail, while the arms and legs get a nice overspray to accentuate sculpted detail. Pearlescent paint is used on the wings of the helmet to nice effect, adding a little ‘zazz to the proceedings. 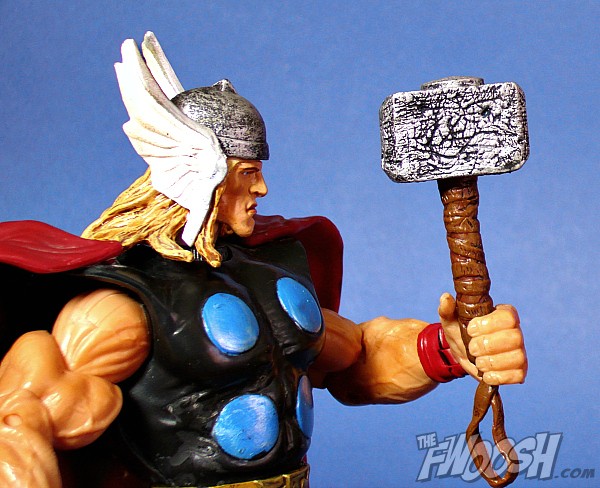 In the end, this version of Thor remains both playable and displayable. While we’ve seen many different versions of the Thunder God since this guy appeared, collectors continue to wait for this look to get an update on one of the new “improved” bodies. Until then, wave three Thor will continue to bring the thunder — at least on my shelves.