Sometimes being the best there is at what you do can turn around and bite ya in the ass. 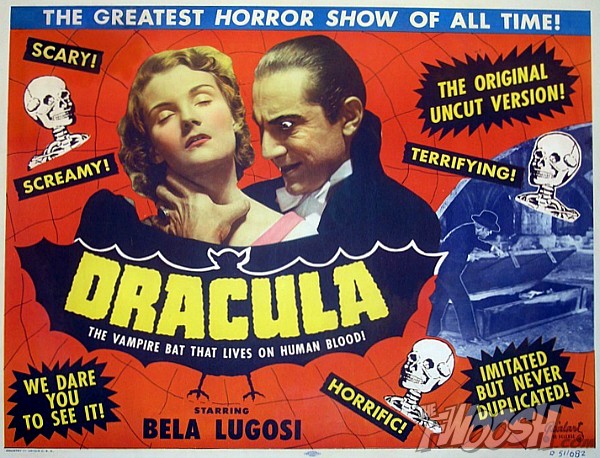 Case in point: Bela Lugosi. After playing the role of Dracula in the 1931 Universal film of the same name, Lugosi found himself in a difficult position. The role made him a worldwide superstar, bringing instant acclaim and notoriety, but it also typecast him for life. Audiences simply could not accept him in any other role — to them, he was Count Dracula. The role that made him famous would dog him until the end of his life… and beyond. Almost a century after he rose from the grave, Lugosi remains the basis for the archetypal vampire. 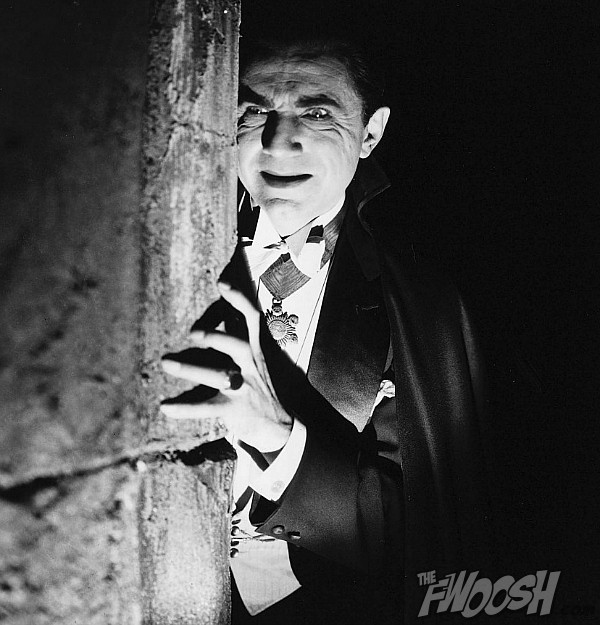 Dracula came to us in the elusive wave five of Sideshow Toys’ Universal Monsters line. The figure is 8″ tall, features eight points of articulation and came with a character-specific base with nameplate and two accessories: a bat and a candle. 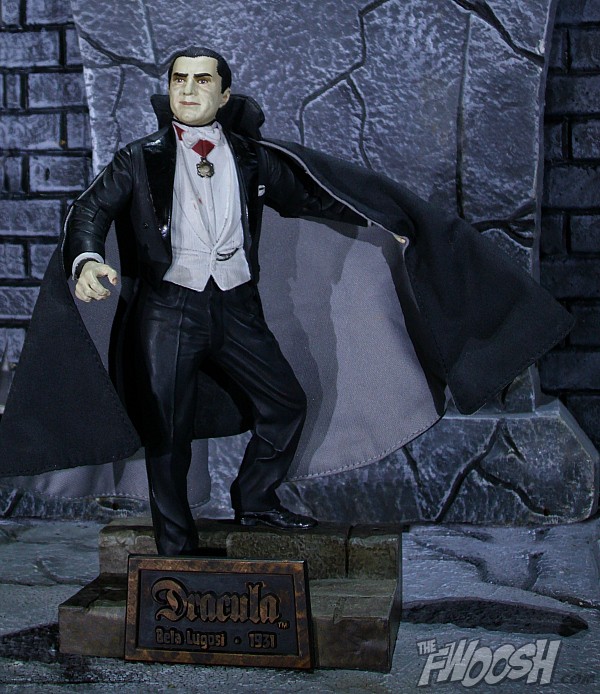 Sculpted by Sideshow Toys’ resident monster-maker Oluf W. Hartvigson, Dracula looks great alongside the rest of the line. On his own, however, there are a few issues that keep the figure from being all he might have been. For a start, the head. The likeness is good — there’s no question this is Lugosi. Everything is there, from the widow’s peak to the sinister smile. It’s the head itself that’s a bit off. While Lugosi did have a round face, this comes off as a little too round; the fullness and shape are more suggestive of the actor in his later years than his Universal period. 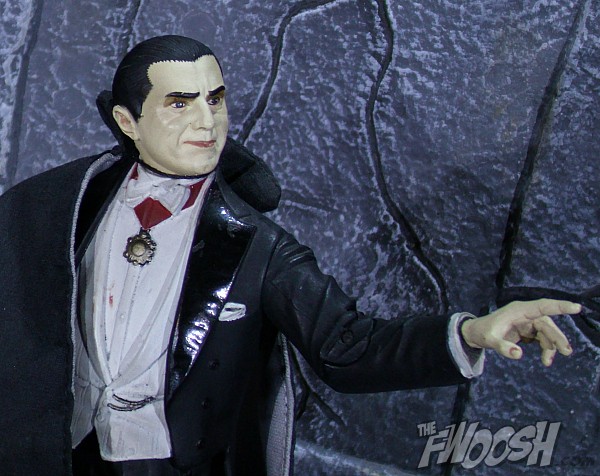 It’s more of a distraction than an actual problem — as I said, it’s unquestionably Lugosi as Dracula. he’s just looking especially wed-fed.

The rest of the figure’s sculpt is dead-on, with all of the necessary details in place. The iconic medallion is there, alongside the bow-tie and old-fashioned shirt collar. The watch-chain and handkerchief add some visual flair to the Count’s evening wear. His enclosed accessories are nicely done; the dragon-shaped candle-holder is suitably archaic-looking, with some “melted wax” running down over the handle. Dracula’s bat form is represented as well, but by it’s very nature it comes off as a bit silly. Yes, it’s screen-accurate, but it could also be easily misidentified as a discount store Halloween party favor. A clear plastic tube was included so the bat could be displayed alongside Dracula, but this doesn’t really make sense. The bat IS Dracula, so how can it be next to him? 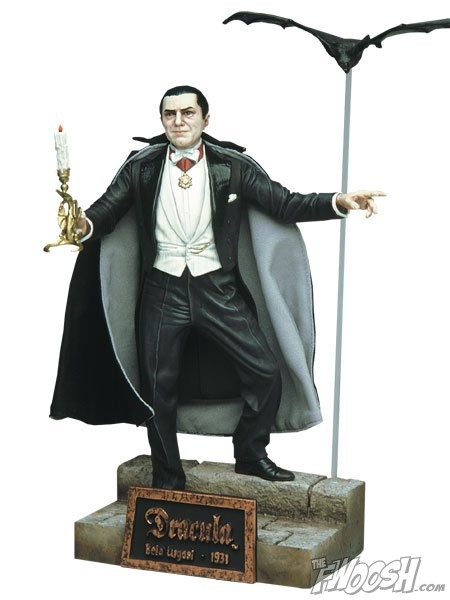 The Count came with a soft-goods cape that required assembly. Sideshow manufactured wave five for comic shops as a retailer exclusive and getting the figures out required their cutting a few corners, production-wise. Dracula’s cape had to be assembled, using an enclosed bit of thread. If the buyer wasn’t careful, this little piece of fabric ended up being thrown out with the trash. 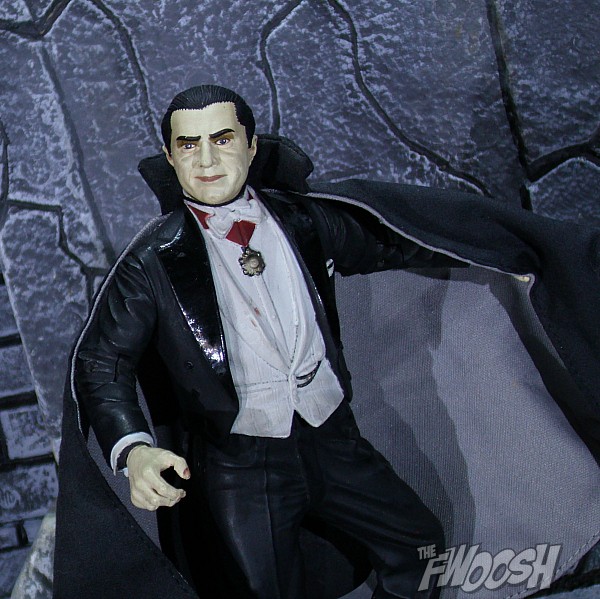 Speaking of cutting corners, the Count only has eight points of articulation, down from the usual twelve. He’s been sculpted with his left leg bent at the knee, presumably to accommodate his stair base. Considering that the other figures in wave five were statues from the waist down, it’s clear this was just a clever cheat on Sideshow’s part. If you’re planning on having Dracula slink around your castle, make sure he has something to put his leg up on. 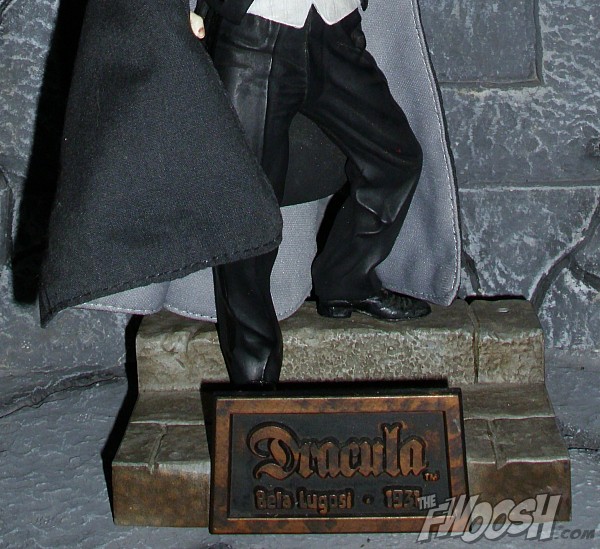 The rest of the articulation is standard for the line: peg-jointed head, shoulders, waist and wrist, with hinged elbows. Once again, Sideshow went the preposed arm route, but it’s not as bad as their Phantom of the Opera or Invisible Man figures because it can simulate pointing, beckoning, or it can grasp the enclosed candle-holder. You can also stick the cape in his hand for more grandiose poses. 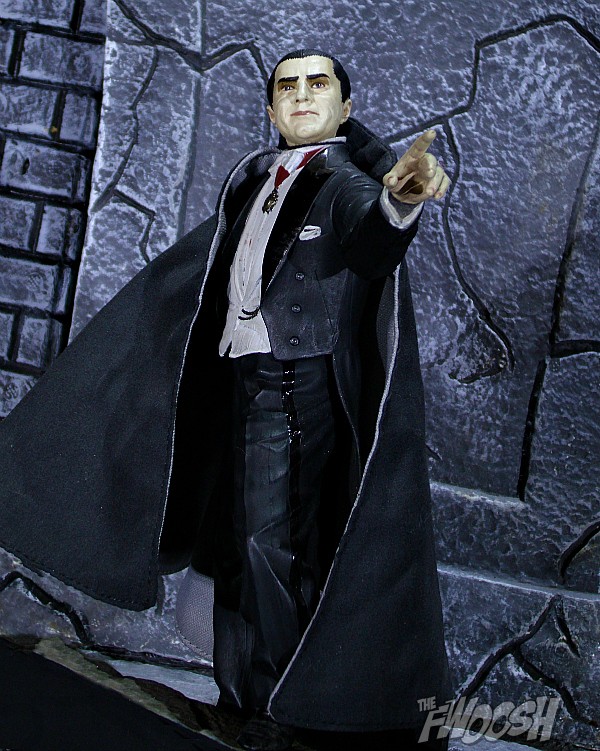 The Count’s paintwork is a bit on the sloppy side. The figure is molded from black plastic, with the details painted in. The shirt and vest suffer as a result; the white paint had to be applied heavily to cover the base, and it looks thick. Also, some of the red from the ribbon ended up on the shirt-front — you can tell yourself it’s blood, but Drac seems far too fastidious in his appearance to walk around with stains on his clothes. The gloss highlights on the lapel are spotty on my figure, perhaps a result of being handled before the paint was dry — your mileage may vary. The best work is undeniably on the head, providing the figure the undead pallor you’d expect from a 500-year-old vampire. 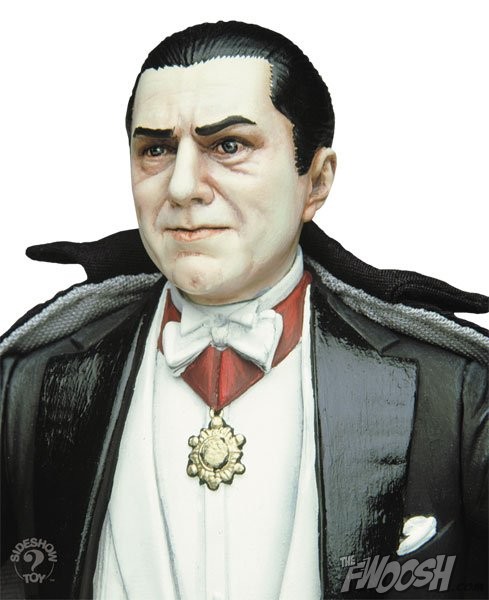 In the end, Dracula is a nice figure with some flaws. He’s not perfect, but he’s the best version of Lugosi’s Count yet. He’s well worth adding to your monster collection — if you can find him.