Whether it’s fair or not, for many years Colin Baker’s 6th Doctor had the distinction of being considered the “unlikable Doctor.” His tenure was among the shortest of all the Doctors, lasting only from ’84-’86 with an 18-month hiatus worked in there for good measure. Ouch. The show was on definite life support while Baker was manning the TARDIS, and it definitely seemed as though the show’s best years were far behind it. 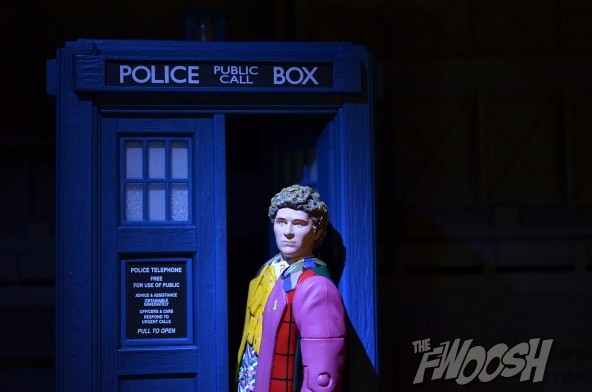 Even now, if you want to watch any of the stories that feature the 6th Doctor, they’re among the most difficult to track down. Netflix has exactly zero available for streaming, and Amazon Prime has a whopping four episodes: the ones that comprise the “Vengeance on Varos” serial. Well, there’s also the final episode of “The Caves of Androzani,” but he appears for less than two minutes at the end when the regeneration from 5th to 6th occurs.

So what’s the problem with the 6th Doctor? To be honest, I had done my best to avoid anything that featured him because I could never deal with his costume. My bias against this Doctor was based on his … outfit. Writing that, it seems completely silly and frivolous, but that’s my only excuse. His costume is such an obnoxious riot of colors and patterns that it’s positively offensive to the eye. And it makes me hate him. Why would the Doctor be outfitted in such a horribly garish nightmare of a costume?

Because the show’s producer wanted it that way.

Colin Baker had envisioned his Doctor being dressed in black. Black would have complemented his more arrogant and pompous personality, and, given the chance, the black may have done something to help him to be taken seriously, truth be told. Instead, the powers that be outfitted him in what basically amounts to a clown suit. All that’s missing is the red nose and white makeup. He’s got the curly afro already, so maybe that’s why the suits thought it would work? Who knows? All I do know is that if I wanted black, and I was given … this … I’d be pissed off, so, knowing this, I can’t help but give Baker credit for doing what he could with what he had. Yikes.

After watching “Vengeance on Varos” my preconceptions of this Doctor were shattered. I didn’t hate him after all. Looking at him, I sure as heck wanted to hate him, but I didn’t hate him. I actually found “Varos” to be one of the more enjoyable Doctor Who serials I’ve seen in recent memory. That’ll teach me to lead with my assumptions. When will I learn? Sometimes the clothes do not make the man, indeed.

Since I’ve held an unfair bias against this Doctor, I haven’t been all that aggressive in terms of collecting toys based on him. The one and only figure I have, the one from the 11 Doctor set, I got on eBay for next to nothing, like $7 shipped FROM THE UK. It was practically free since there was little demand or competition for it. I bought him just because I felt as though I needed a 6th Doctor just to have every incarnation represented on my shelf, so it was basically for completist reasons. I didn’t seek him out because I wanted a 6th Doctor, strictly speaking. But now, after learning a bit about him, I’m actually glad I have him.

Like all of Character Options’ Doctor figures, the sculpt is extremely faithful to his on-screen counterpart, though this particular one is wearing a yellow ascot as opposed to the turquoise one he wears in the few episodes I’ve seen. The paint work on his costume is unreal — it’s extremely detailed and clean. All the stripes, patchwork patterns, checkerboard patterns, and plaid patterns are there in vivid color. Even on this small 5-inch figure it’s all too much for the brain to process and just looks like a … headache. But I’ve got to hand it to whoever painted this guy — they did an outstanding job.

The only criticism I have of the paint job is the chain he wears across his vest. I’m assuming it’s a pocket watch chain, but it’s painted in a very odd pattern — half green and half pink? It’s the same pink and green as his vest. It looks kind of terrible as a result. But going by the rest of his getup, I’m willing to be it was intentional.

The head sculpt is solid if a bit bland and expressionless, like most of the figures based on the different Doctors. His likeness owes much to the near-perfect paint apps on his face and hair. It’s very tight and clean work.

His right hand is sculpted in a way that suggests he should be gripping a sonic screwdriver, but he didn’t come with one. He’s the only Doctor in the set to come with zero accessories, so even now, all these years later in a set of toys, the 6th Doctor is still getting screwed. To be fair, I’m not exactly what he should have come with, it’s just a funny thing to notice.

Articulation is standard Character Options fare. No ab crunch, limited arm movement, a decent range of motion in his legs, but then they’re hindered by his coat. Basically, he looks great in a vanilla pose on the shelf. Don’t expect much more.

Even though his time on the show was brief, Colin Baker would go on to give voice to the Doctor in a series of audio plays that proved to be pretty popular. In fact, he was once redeemed by being voted the “greatest Doctor” of the audio plays, so maybe the secret is the 6th Doctor is a great character as long as you don’t have to look at him. I think that fits.

There is a version of him available as a Comic-Con exclusive that has him all decked out in just shades of blue. It’s a much better design and helps him look less like a mental patient. When it came time to produce an animated version of the 6th Doctor for a Real Time webcast, his usual getup proved to be too challenging to animate, so they went with a much simpler design. If they didn’t want to go with black, then this is the version they should have gone with in the first place. It’s so much easier on the eyes. There’s another version of him available with a blue cape over the usual costume, which is better, but still a little much. This all-blue is the way to go. 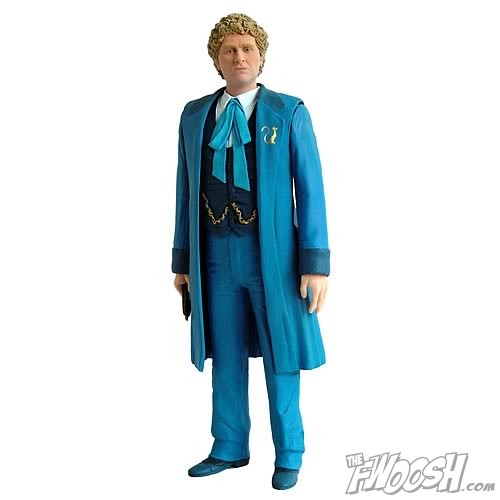 Most versions of the 6th Doctor are easy to find on the secondary market, and prices tend to be reasonable. One version of that costume on your shelf is all you need, though, so any one of them is just as good as another, in my opinion. He was recently issued again in a two-pack with a Dalek, and that one comes wearing the turquoise ascot, so if you can deal with the price of the set, that may be the better way to go if you’re on the market.