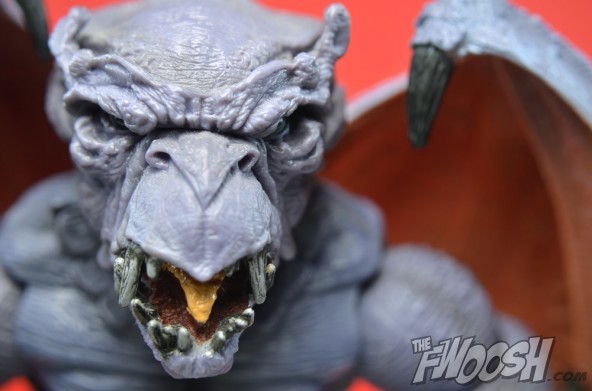 Have you ever wondered if there ever existed a creature more rare than the mythical unicorn? Well, if Marvel Legends collectors and eBay are to be believed, it is the Marvel Legends sister-line Fantastic Four Classics Dragon Man figure. Holy smokes, it takes a lot of scratch to get your hands on one of these guys if you never had the chance to buy one when he was released so long ago. But is his rarity the only thing that drives that price through the roof? Absolutely not.

When you have a line that has been around, and has been through as many iterations as Marvel Legends, there are bound to be some rare figures floating around out there. Sometimes a character just gets his or her time to shine once in a toy line and then they are swept into the annals of history, never to be reborn again. So that happened with Dragon Man, and he just happened to be double shortchanged in terms of release by being a part of the second series of the Fantastic Four Classics line that barely got a release to begin with. Sure, at first he was not that difficult to find, and I remember people actually passing on him because he was not comic accurate enough for their tastes. Heck, I remember when I got my F4C series two set from Big Bad Toy Store I was not even all that excited about getting him, but as soon as I opened the figure, I was turned right around.

See, when a figure like the ML Scarlet Witch is more rare because of a limited release (which she did have), the current conversation seems to center around how we have never gotten a good Scarlet Witch figure. Which we haven’t, because, let’s face it, that figure is a legend in the world of terrible figures. So, just because she is rare, that doesn’t mean she is going for unheard of amounts of greenbacks on eBay. Yes, Dragon Man is rare because of his release and the fact that we have never gotten another version of him, so those are contributors to his high price, but I believe the main driver is that he is an exceptional figure on top of being rare. That is like action figure double jeopardy for those that did not take advantage of the original release.

Just look at him. Dragon Man is AWESOME in terms of sculpt, and he has very surprising amounts of articulation that give some very useful movement for posing. Since he is not as humanoid in form as most Legends, his articulation scheme is fairly unique, but, with the possible exception of some torso movement, he has just about everything you could ask for. Keeping in line with Toy Biz’s penchant for doing points of articulation “because we can” mentality, you get some articulated hands, toes, and a jaw with this figure. All of these work out better than normal due to DM’s size, and the fact that  you can change the posing options for his face gives him some added personality. His tail and wings are detachable, and while the former is connected with a more conventional peg, the wings articulate with partial ball joints to offer varied positioning. So, he can look just as natural at rest as he can in a flying pose.

All that said, the figure’s strongest asset remains the sculpt, and it is a thing of beauty. There are so many things actually sculpted here and his dragon’s hide has more folds and crevices than probably any other figure I own. Sure, I get the complaints that he is off-model for a classic Dragon Man, but if you think about the realistic aesthetic that was attempted (for the most part) in Legends, they took the design and integrated it pretty well. His face, wings and back are of particular note and the paint added to these areas only enhance the amazing base sculpt. I will admit that it had been a long time since I took this figure off the shelf prior to this Archive entry, but playing around with him reminds me of just how great he is and so demands such a high aftermarket price. 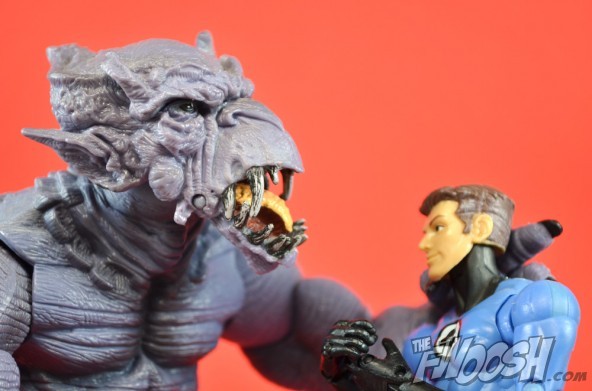 Is Dragon Man due for a redo in Legends or even possibly in Marvel Select? Probably, but that would certainly be mostly for those that never got the chance to own this particular figure. Or those that happened to pass on him way back when. His eBay prices are pretty insane, so much so that I have been personally tempted with parting with him; however, enjoying him in something like a photo shoot makes that a near-impossible commitment, and I actually count myself lucky for actually owning this great piece of Marvel Legends lore.