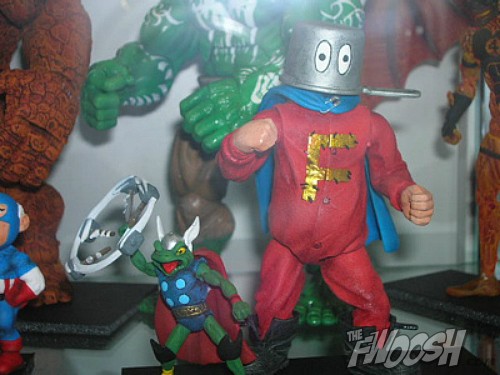 “The one that got away.”

Action figure fans are all too familiar with the concept: toy companies often show off product that, for one reason or another, never makes it to market. Collectors of Marvel Legends can tell you all about the blue Wasps, Thor frogs, and X-Babies whose absence is only compounded by the passing of time. The longer we go without them in our collections, the greater their allure grows. And while these tales of failure and loss are old news to many in the Fwoosh community, it seems worth recounting the tale again, if only to look back on all that we missed and ask ourselves “What If?” 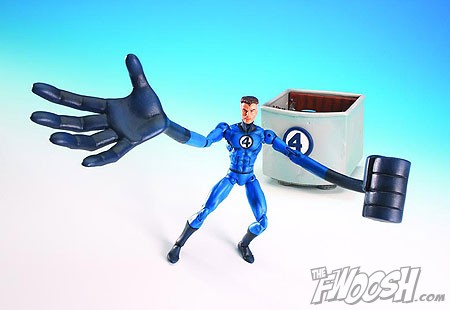 For the most part, what we saw was what we got in the first few years of Marvel Legends, although occasionally a figure would vary from prototype images (remember Nick Fury’s cigar?). Take wave 5’s Mister Fantastic. The figure’s original John Byrne-inspired head was allegedly changed due to “feedback” from the Internet collector community. Boy, that worked out in our favor, huh? The released figure ended up with a thoughtful but decidedly non-heroic expression on his face. It looks fine if you prefer to pose your Reed pondering the imponderable, but that placid puss looks pretty out of place throwing a punch. I’d still love to see the original used someday. 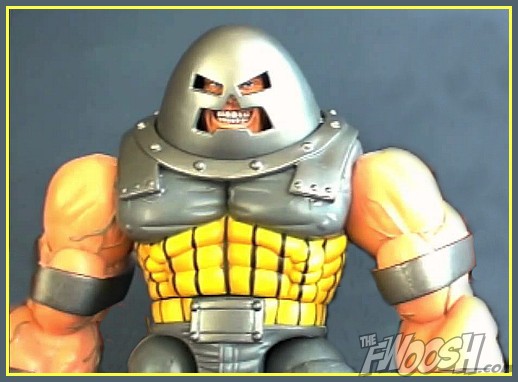 Both wave 6 and 7 were tough to find at retail, and Toy Biz was looking for a way to get those figures to the collectors who missed ’em the first time around.  Their answer was a Walmart exclusive “best of” wave. This assortment was to be made up of the following: regular and phasing versions of the Vision, classic and “transforming” Ghost Rider, Hawkeye, Goliath, regular and Dark Phoenix, Wolverine (brown costume), Deadpool, and the Juggernaut. Not content to rest on their laurels, Toy Biz went with the slick new color palate Cain Marko sported during the then-current “Trial of the Juggernaut” storyline. You know, the one where he bumped uglies with She-Hulk. Anyway, the “best of” assortment was never produced and this figure was scrapped, although his smugness carries on.

From wave one on, every figure in Marvel Legends came with some sort of display base, but that concept ended with the introduction of wave 9’s Build-a-Figure, Galactus. Bases for the wave 9 figures had already been designed, but were unceremoniously scrapped. All we have are tantalizing rumors (a Ditko-inspired, tentacle-laden base for Doctor Strange) and this image: 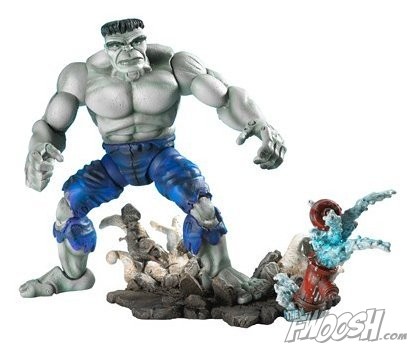 Okay, I get punching a tank — but smashing a fire hydrant? That just seems petty. Hulk not respect taxpayer dollars! Another aborted idea for wave 9 was a hover-chair for Professor X. It’s been said the inclusion of the chair didn’t “cost out,” but it’s also possible such a massive hunk of plastic simply didn’t fit inside the standard Marvel Legends clamshell packaging. In the end, Professor X was stuck reusing the chair from the X-Men movie line. it seems like a cop-out, but at the time we were all too amazed by the Big G to care. 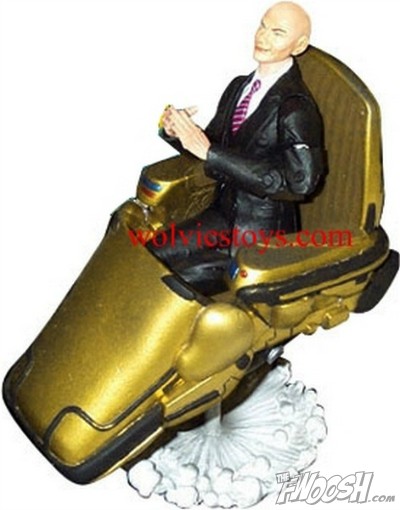 At one point an Avengers Quinjet was in the planning stages. To be spread out over four waves, the jet would have been made primarily of packaging and plastic strips, and was meant to be more a display piece than anything. It seemed like a nice gesture on the part of Toy Biz, but no one is losing sleep over not getting it. The same cannot be said about our next example… 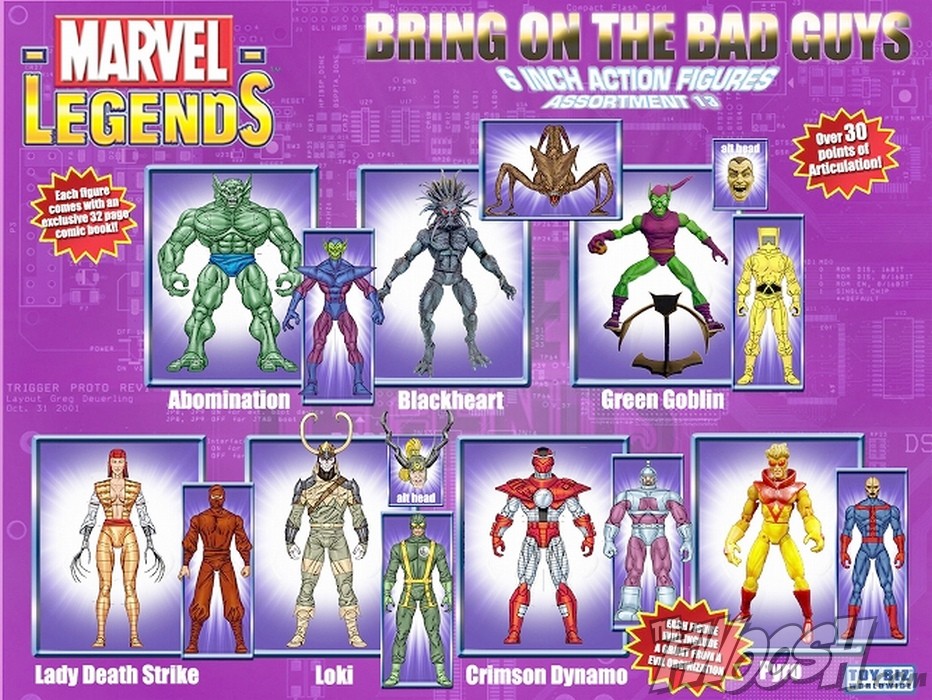 Here’s wave 13, aka the “Henchmen series.” This wave was to include partially articulated figures of the AIM Scientist, Hellfire Club goon, Hydra Agent, Doombot, Hand Ninja, Skrull soldier, and Brood Drone. Pretty ambitious on Toy Biz’s part, but doomed to failure. At the time the price of petroleum was skyrocketing and giving away a free figure with every toy simply wasn’t feasible. The henchmen were shelved in favor of the Onslaught Build-a-Figure. We later saw the HYDRA agent and Hand Ninja retooled and released by Hasbro, while the Skrull soldier and Brood Drone ended up being released by Marvel Select. The Doombot, Hellfire Guard, and AIM Scientist remain unreleased, which is too bad — those AIM dudes make a fella want to army-build! 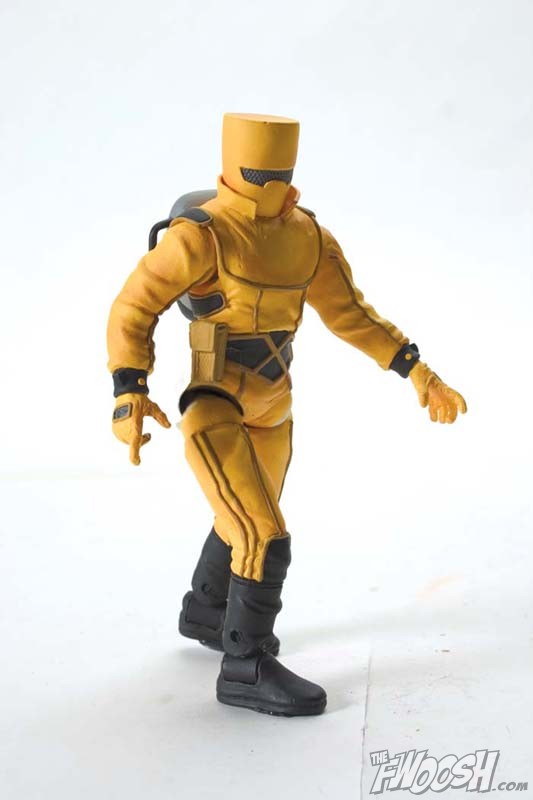 The trail of tears continued through wave 14, with the X-Babies getting the chop. These were smaller, statue-type pack-ins, but their diminished size and articulation still proved cost-prohibitive. It’s too bad, as their inclusion would have added a little visual flair to the MOJO Build-a-Figure. For all of that figure’s techno-organic detail, he still came off as rather dull. Being able to pose these colorful little figures around him would have spiced things up a bit. 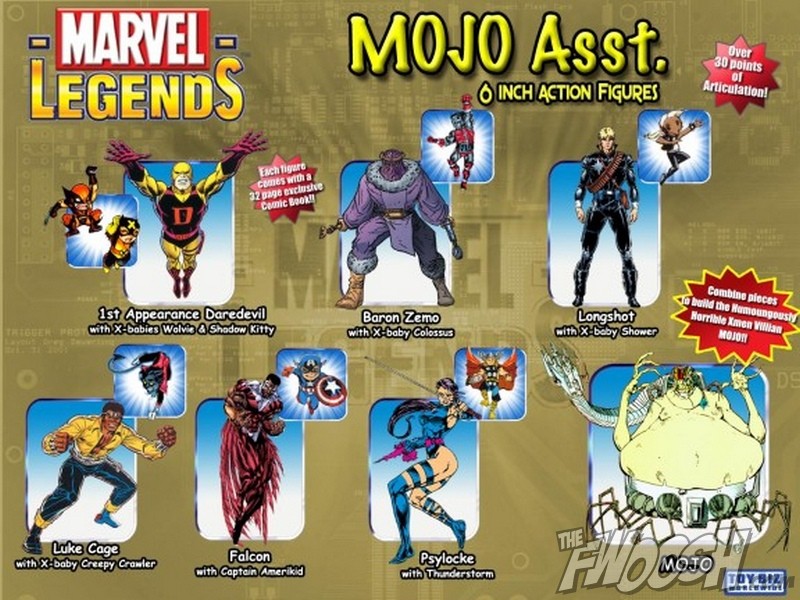 For the visually-impaired among you, we have Colossus as “Colossusus,” Nightcrawler as “Creepy Crawler,” Shadowcat as “Shadowkitty,” Storm as “Shower,” Rogue as “Shugah,” and Wolverine as “Wolvie.” The Mitey ‘Vengers consisted of Captain America as “Captain Amerikid” and Thor as “Thunderstorm.” I have no idea where the Iron Kid figure was meant to go, as 1st Appearance Daredevil was pulled from this wave and replaced with 1st Appearance Iron Man, maybe they were meant to be a twofer. Forbush Man and Thor Frog were supposed to fit into the plan as well, but I don’t know if they were ever placed before being cancelled. 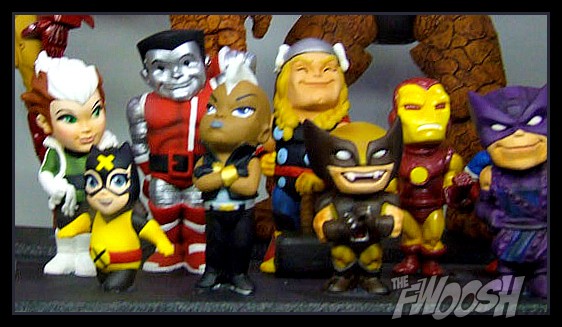 Both waves 14 and 15 had phantom figures in the form of Power Man, Psylocke, and Wasp. Planned as paint variants, these figures may or may not have appeared in a very limited numbers at the end of the Toy Biz run. Carded examples do exist, but whether these were actual retail specimens or just packaging samples is difficult to say. If you happen to have one, you own one of the rarest pieces in the entire collection. 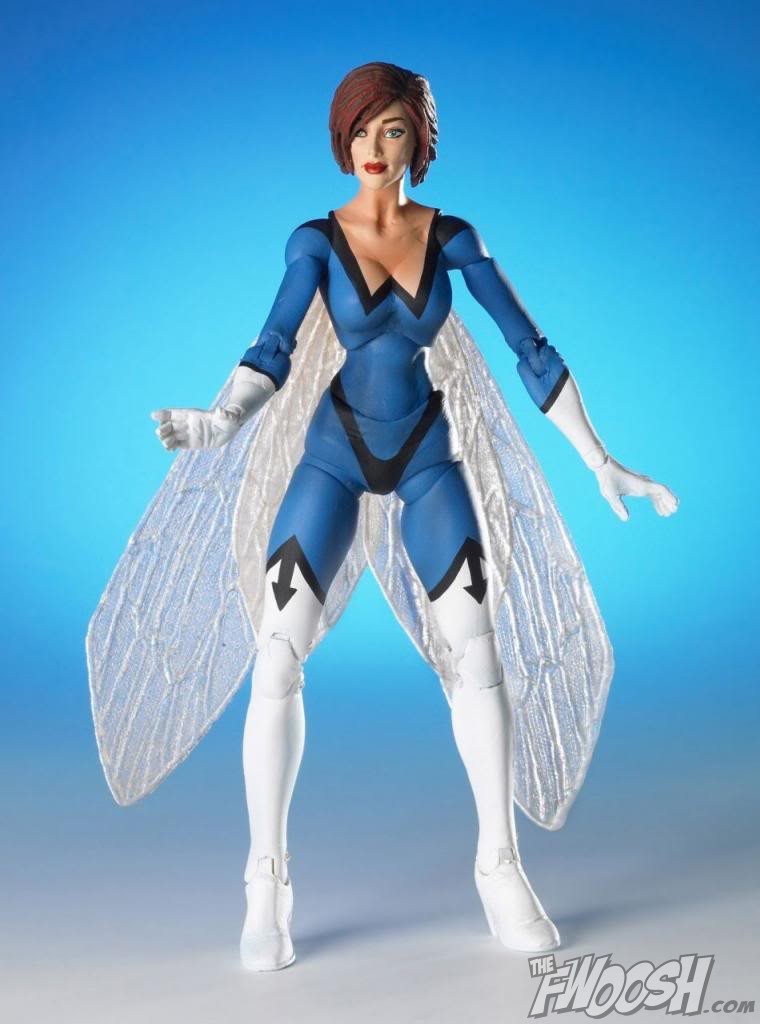 The real action went down in 2006, when Toy Biz sold the Marvel license to Hasbro. While its hard to imagine these days, there was a time that Marvel was struggling. In 1998, Toy Biz bought the company. With this acquisition Toy Biz rebranded itself as the Marvel Entertainment Group. The name Toy Biz was then used as an in-house design group that would farm out production and distribution to ToyBiz Worldwide, who got the product out there. In a fit of pique, the company bought itself out (don’t ask), licensing the Marvel characters to Hasbro for a period of five years. Collectors braced themselves for the end of their favorite line, but Legends soldiered on, with Hasbro issuing what would have been wave 16 if the change hadn’t happened… but that’s a whole ‘nother article.

Another strange chapter in the saga was the Toyfare contest. Back before websites like the Fwoosh made toy magazines irrelevant, Toyfare was a great place to get news on the hobby. The magazine was also fairly well connected and worked with Hasbro to pick the “next” Marvel Legend. Like most readers, my response was “Uh, why not make them all?” We were used to being shown entire waves — but being told we could only have one figure out of the bunch? The dark clouds of dissension began rolling in.

Our choices were Aurora, Gambit (X-Men costume), Lilandra, Magneto, Northstar, Silver Samurai, Storm in her 1st Appearance costume, and Sunfire. While the figures look a bit dated today, it was a strong enough lineup: a few Alpha Flight members and some key X-characters, including a badly-needed Magneto redux — and yet, somehow, we ended up with this ass-clown: 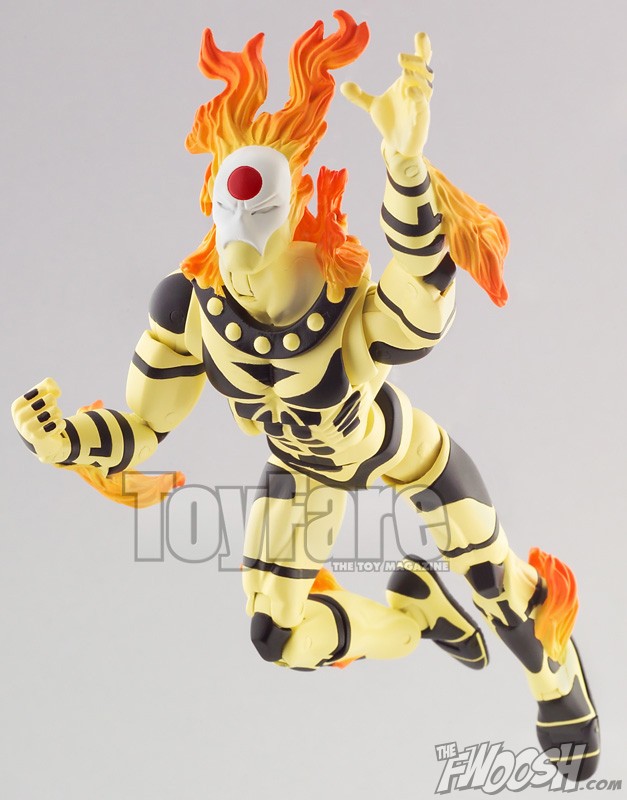 Okay, that ass-clown crack may have been a little strong — Sunfire is a nice enough figure, but there’s no way people wanted him more than a comic-accurate Storm. I call shenanigans. Sunfire was allegedly “only available through hasbrotoyshop.com,” but he showed up by the truckload at discounters like TJ Maxx and Marshalls. Dang it, I’m still waiting for a Silver Samurai, Hasbro!

In 2008, Valkyrie, Bi-Beast, McGuinness green Hulk, and Red King were slated for release in the Hulk Classics Fin Fang Foom series, but were bumped from the wave at the last minute. The McGuinness Hulk was changed to the Red Hulk BAF and fast-tracked to retail to anchor a Target-exclusive wave of Marvel Legends. Bi-Beast and Red King stayed on the shelf and cried tiny sick tears. 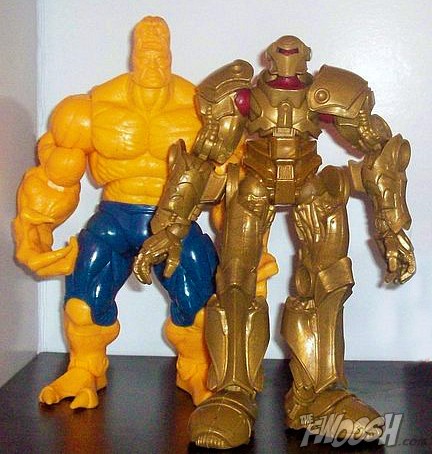 In 2009 there was the Hasbro Marvel Legends “Fan’s Choice” poll. On SDCC Preview Night, Hasbro exhibited prototypes for potential figures in the next assortment. These were Brother Voodoo, Black Widow, Classic Ms. Marvel, Deadpool, The Hood, Lady Bullseye, Modern Havok, Multiple Man, Nuke, Spider-Man as The Amazing Bag-Man, Terror, and White Phoenix. Fans cried foul at the inclusion of Black Widow and Deadpool, as these were figures Hasbro clearly intended to issue, winners or not. These two, along with the aforementioned Hulks Classics Valkyrie, were released in 2-packs alongside Winter Soldier, Warpath, and that McGuinness Hulk, respectively.

As you can see, over the years quite a few figures were given the push, but never made it to retail. Sadly the problems persist to this day. Where is the new Blade we were shown? Or Phoenix 5 Cyclops? Or BULLDOZER? Hasbro has promised to at least get us Bulldozer, but the other two may be lost forever. They join the ranks of the unreleased, those figures that were never made and yet cast their long shadows across our collections. Cheers.

Discuss the article of the Fwoosh forums