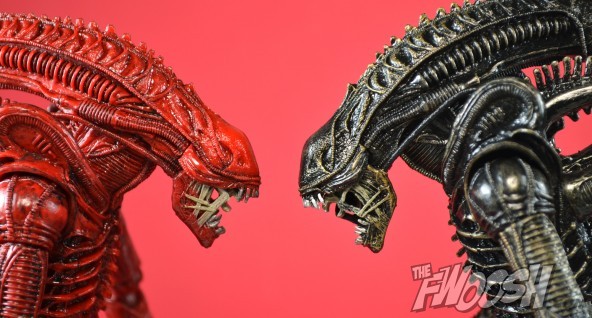 If you have not noticed, I want to draw your attention to the fact the NECA is quietly killing it with many of their current properties. It is almost amazing how quickly they have gone from making, essentially, plastic statues to being full-on super-articulated action figure extraordinaires. Sure, their sculpts have been solid pretty much since the beginning, but when I can get everything from Lenny Gremlin to Dutch from Predator in super-articulated glory, that is something I am going to continually sing about. Now, one of their standout licenses has certainly been the Alien(s) franchise of late. Working within a world designed by H.R. Giger certainly has its advantages, but the first series of figures from the second movie absolutely crushed everything from the Colonial Marines to the Xenomorph warrior. So, taking the foundation set by that series, we have been given a two-pack features a couple of repaints of the Xenomorph from the Aliens Genocide story. It is pretty basic on its surface, but tons of cool in the execution.

I have to say that, prior to the announcement of this set, I had no idea what Aliens “Genocide” was. I will readily admit to the fact that, despite the overwhelming popularity of the second installment, I am much more a fan of the original Alien movie than any of the rest of the property’s offerings. Ridley Scott’s masterstroke of claustrophobic horror in the vast and unending backdrop of outer space is much more to my tastes than the subsequent action movies that followed, but as fan of the property overall, so many of the designs and characters become essential in their plastic form. Even though I will hold out hope until the end of time for the entire crew of the Nostromo, I still have Hicks and Hudson, and given the opportunity, getting my hands on more iterations of that fantastic Xenomorph figure is something I will take pretty much every time.

I did not get to look at that figure for a feature previously because Matthew K absolutely destroyed everyone’s corneas with his photographic master class, but I wanted to jump on this set because I really do love just about everything that these figures are about. Sure, you are essentially getting a black and red(!) repaint of the Warrior figure, but when you are essentially talking about an army builder, I am not sure how it gets any better than this. Yeah, I want my Big Chap figure (coming in the next assortment), but I would be telling myself no small fib if I said I was not down for tons of the Warriors in an assortment of colors. An assortment of colors… Whoda thunk it?

So, if you have the Xenomorph Warrior, you pretty much know what you are getting in these two figures. Starting with the obvious, there is not one centimeter of these figures that is not covered with some kind of sculptural detail. Giger offers up a feast to an ambitious sculptor when it comes to possible detailing, and NECA’s stable of talented artists always seem to be up to the task. The sculpt is thin and wiry, yet tall and imposing. If you thought Hudson’s “Game over, man” freak-the-f***-out expression was appropriate before, just wait until you have him stalked by a RED Alien. I would not be able to name a detail left undone even if I wanted to, so let’s just say that the keen eyes of the sculptor pretty much accounted for everything 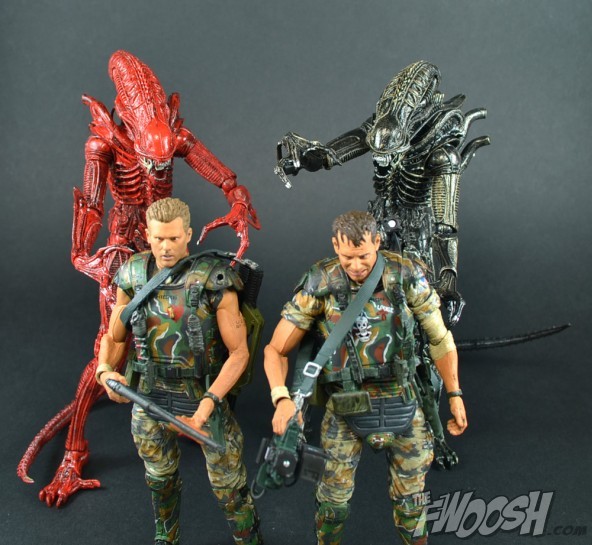 I could spend an entire article talking about the sculpt of the head alone, but then I would be left with having to write a post about an Alien body, and that is just a little too strange. However, if you cannot be sold by the fact that this figure has an articulated jaw and moveable alien tongue thingee, I don’t know what else to tell you. Those two features actually work really well, and while the jaw is small, it doesn’t feel particularly fragile to me. The rest of the head sculpt is covered with all of the appropriate details and the nicely applied paint applications help to bring that out. The Alien design from the second movie on has a much more traditional proportion from head to body (shape notwithstanding), so it moves about well on the neck peg, and you get a better range of movement from front to back than I would have anticipated.

The body is probably one of NECA’s most articulated frames ever, and it is not just the number of points that is impressive, but also the placement choices and functionality of them.  The Xenomorphs are spindly, yet an agile and fleet-footed species. So while there is a lot going on with long legs, tail, and back tentacle things, all of the articulation is incorporated so that they can be posed anywhere from running to crawling and do look quite “Alien-ish” while doing so. I wish the hips had a bit more front-to-back range, but they do move pretty well, so it is a bit of nitpicking coming from me. Now, I am normally leery of mid-foot articulation due to the fact that it can make figures very unstable, but for these guys I think it is essential. They run on the balls of the feet and creeping and crawling require the bend there as well. Plus, with the bendy tail, these guys are pretty solid on their feet.

Now, I have seen several reports that people have gotten these Genocide sets and some of the figures have had collapsing or exploding crotches. If you are not familiar with that high-brow lingo, it means people have had breaks in the hips with their figures. Now, I have been fortunate with this set and the Xenomorph Warrior, but I would still caution you moving your figures for the first time; some paint might cause them to stick and that can lead to cracking if you try to force a joint.

While I do not really know much about the whole Genocide thing, I am glad to have two more Xenomorphs on my shelf, and I have to tell you, I LOVE the red. I thought it was a little hokey at first, but it just pops right off of this figure and makes him look really cool. If they are all supposed to be a dark color for you, you can always pretend he is just covered in blood of his last victim.

NECA continues to up their game and knock it out of the park with this property, so I cannot wait to see where we are going next. Big Chap and the Queen are two big ones for me, but Bishop will be fun too. I will continue to keep my fingers crossed for Ripley and crew of the Nostromo, even if Weaver is a tough sell. You can pick this set up at Amazon, linked below.