I think it’s safe to say that the Fighting Foe Men were one of the more controversial items in this year’s Masters of the Universe Classics subscription.  The set certainly seemed to take a lot of the blame for inadequate subscription sales during last year’s subscription hoopla.  I was starting to feel like I was the only one out there that actually wanted these guys!  Let’s take a closer look…

After the Great Wars ended and Eternia® was left without a king, a group of renegade pirates known as the Fighting Foe Men™ took over the Valley of Gnarl and all of the surrounding territories. Spreading fear throughout the land, they built great war machines like the Roton and Talon Fighter to terrorize the populace. Challenged and eventually defeated by a champion from the north, the Fighting Foe Men™ were cast into a glacier and magically frozen for over five thousand years. Eventually, they were discovered by Hordak® who returned to Eternia® and set them free in return for serving in his army during the Second Ultimate Battleground. 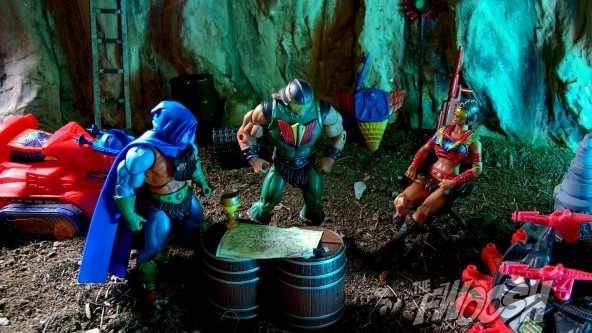 I find it interesting that all three of these characters are cast as villains in the MOTUC canon.  Looking at the designs, I would say that Shield Maiden Sherrilyn and Dawg-O-Tor actually look more like heroic warriors to me. 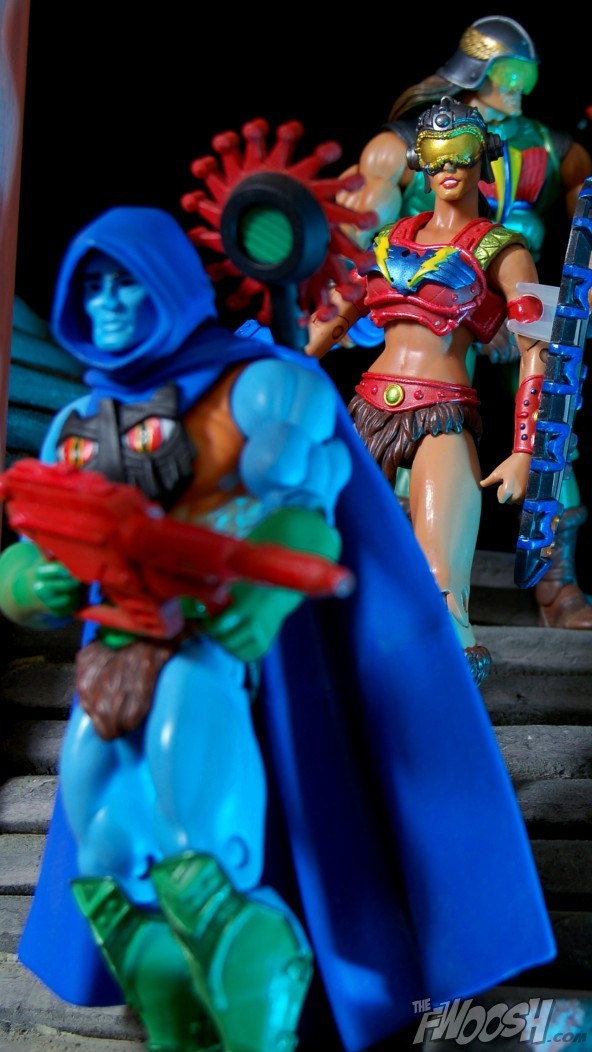 I do like that the bio places them in two eras, so it gives you some placement options as to where you display your figures (if you follow the bios to decide your display logic, that is). 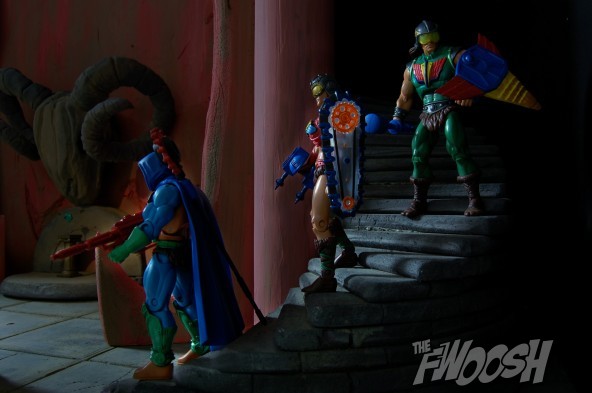 The idea of using these Monogram box art inspired characters as the bio mentioned Fighting Foe Men does not exactly match up with what the words “Fighting Foe Men” conjured in my fevered imagination. 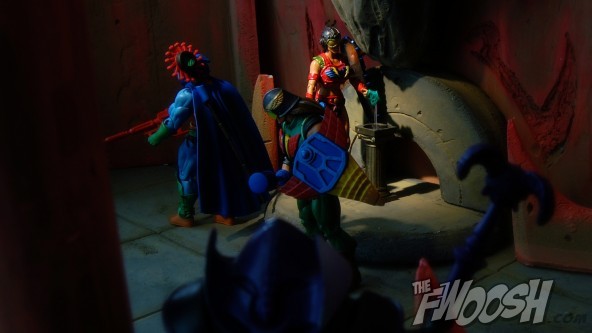 I pictured more of a group with very Frazettaesque barbaric styling — something similar to Vikor and Demo-Man. 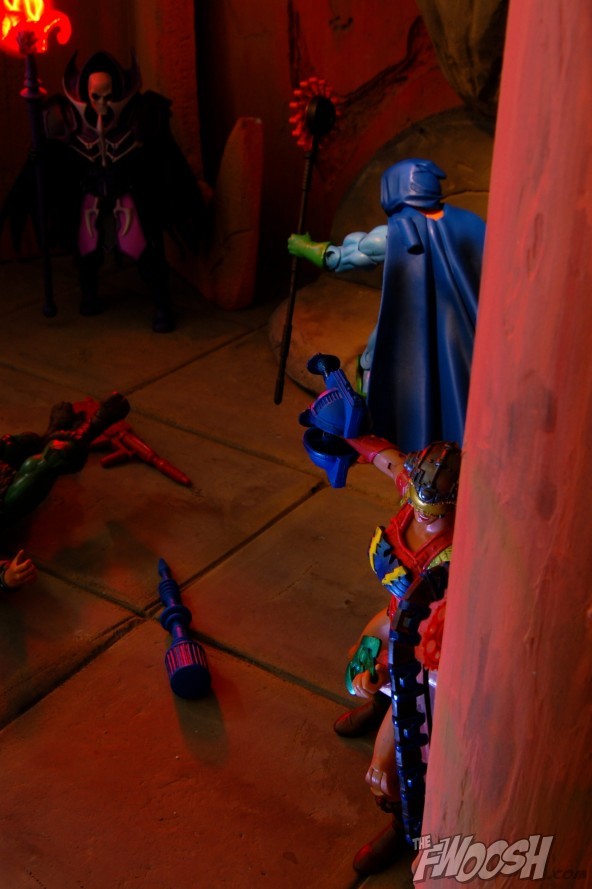 I think most people reading this probably already know that these three figures are based on characters that only appeared on the box art for Monogram Models versions of the Attak Track (Shield Maiden Sherrilyn), Talon Fighter(Dawg-O-Tor), and Roton (Dittstroyer), and their accessories are themed with an eye toward those vehicles. 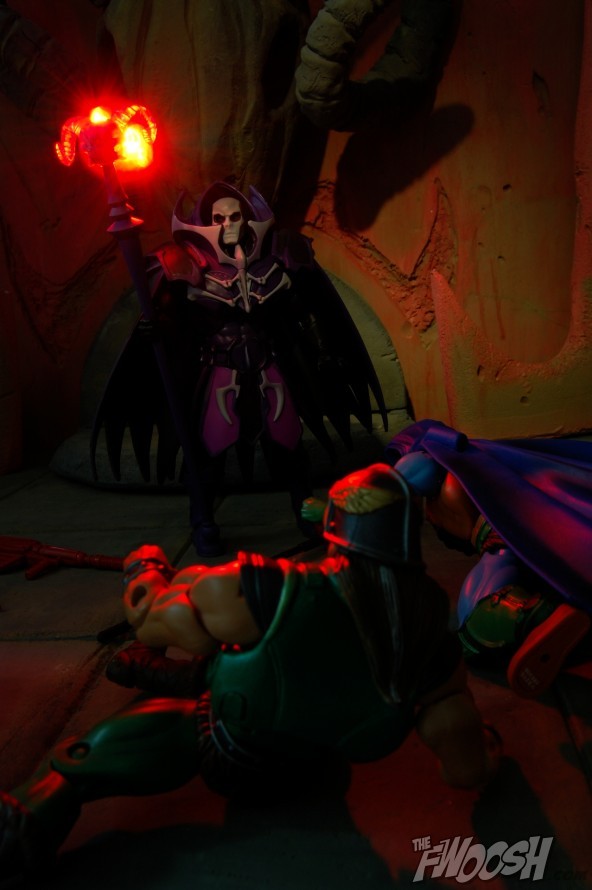 What’s interesting to me here about these is how they are modeled specifically on the monogram model versions of these vehicles rather than the original toys.  It makes sense, but I don’t think I ever paid much attention to the differences between those versions. 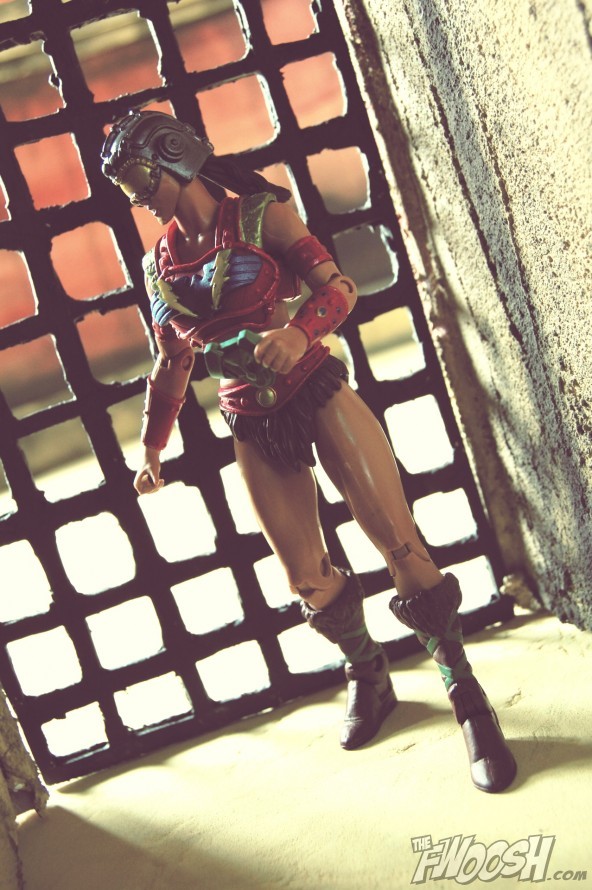 The shield is made from a solid chunk of clear plastic with track details sculpted and painted on.  The gun is made from a slightly gummy plastic so the barrels can get a little bent in the box.  A simple heat and reposition will fix that for you.  I really like the tech details on the gun and the shield is nicely versatile and can be clipped onto the forearm or secured to her bicep.

I like the profile SMS strikes while wielding these two weapons and they are probably my favorite of the accessories.  The emblems allow you SMS to be an independant operator or a Horde member.  These clip securely into the soft plastic of SMS’ armor.  I like the blue metallic on the non-horde symbol which is based on a sticker on the original attak trak.  Both symbols look great on her.

The Shield and club are both cast in some nice solid plastic that doesn’t really warp or bend like SMSs’ blaster.  I do find that my shield clips on weirdly and doesn’t want to stay on straight all the time.

The sculpt on these are both sharp and Dawg-O-Tor looks good wielding them, though it’s a bit much if you have him standing right next to a Talon Fighter.

I think that goes for all of the Foe Men as the weapons are very cool nods to their vehicles that we probably won’t see in MOTUC, but they look a little bit strange to me when posed next to the old Mattel vehicles holding them.  I would have liked more standard melee weapons that weren’t vehicle themed. 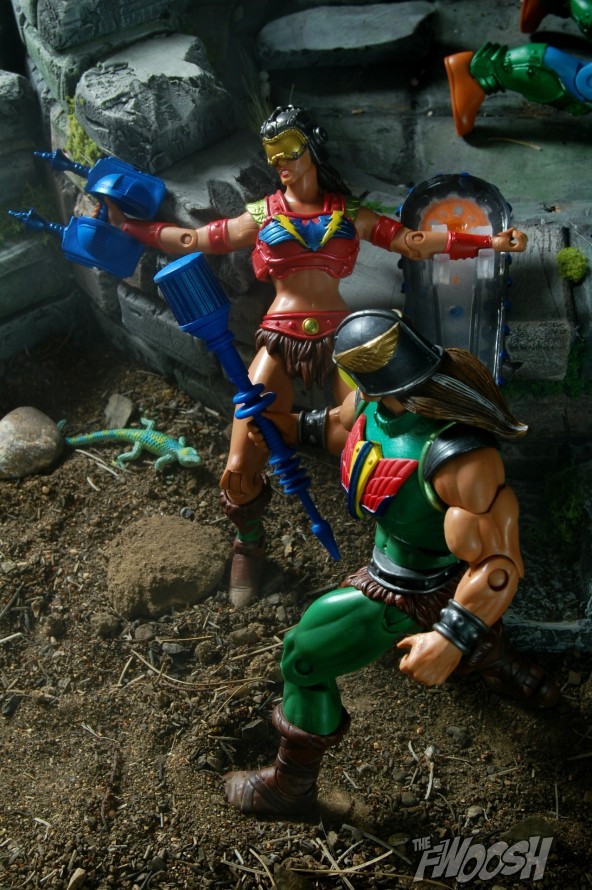 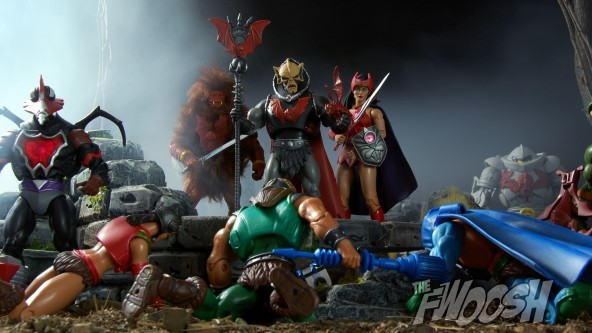 The staff is stiff plastic, but it was a little bent.  The gun is pretty soft plastic but keeps it shape well.  The paint on all of the Foe Men weapons is super sharp and features that nice metallic highlights that we usually see in MOTUC.

Another nice feature on Ditztroyer is that his staff can be stored in a slot on his cape.  More of this, please!  I love holsters and sword frogs and the like on these figures.  The blaster is so huge that it’s a little awkward to pose Ditztroyer wielding it, but I found a few poses that I thought looked cool.  The symbols swap fine, but I really prefer the Horde symbol for Dittstroyer.  The black Roton symbol clashes with the already garish color scheme and the the large eyes and shape kind of makes me think he’s got a kitty symbol on his chest.

The new parts include the head, armor and belt/loincloth.  I find it interesting that they actually sculpted a new loincloth for Sherrilyn since it is very similar to Battle Ground Teela’s existing loincloth piece.  I’m glad they did because the fur sculpt is a bit nicer and more sharp. 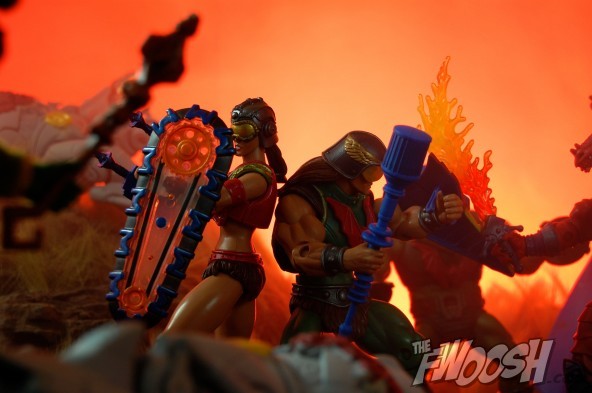 The armor and helmet has a lot of awesome piping and techno details that feels very ’80s MOTU – think a girl version of Man-At-Arms – and matches the details that you can see in the Attak Trak Monogram model painting. 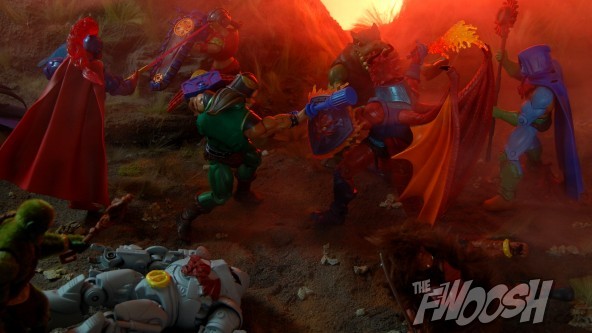 His new parts include the head and the armor.  The armor is pretty obscured in the Monogram Talon Fighter painting so a lot of the detail is made up here, but all the details in the helmet and armor also have a very MOTU feel.  The head sculpt also has thick features that makes me think of early MOTU concept art and inspirations like Frazetta. 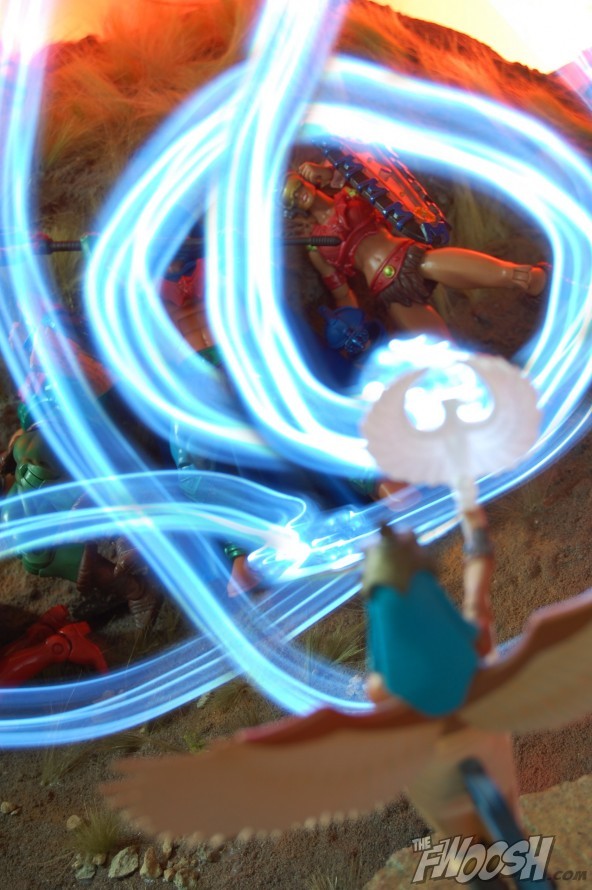 Ditztroyer has a new cape and head sculpt.  Ditztroyer is probably the biggest departure from what was visible on the Monogram painting of all the Foe-Men.  In the painting, there is a clearly visible bracer and boot top design that were not sculpted new in favor of parts re-use. 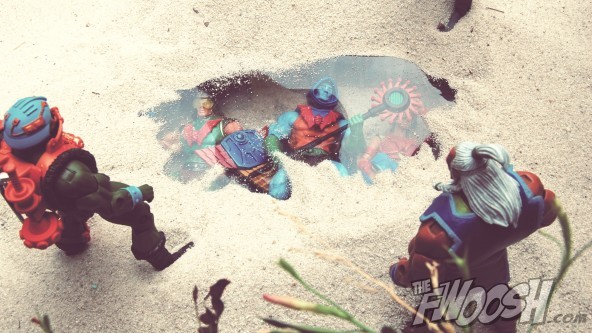 Normally I don’t have a problem with parts re-use, but I really liked the studded leather strap design of the Monogram forearms so I miss that here. 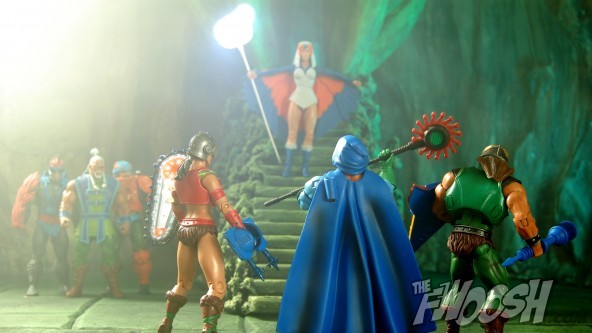 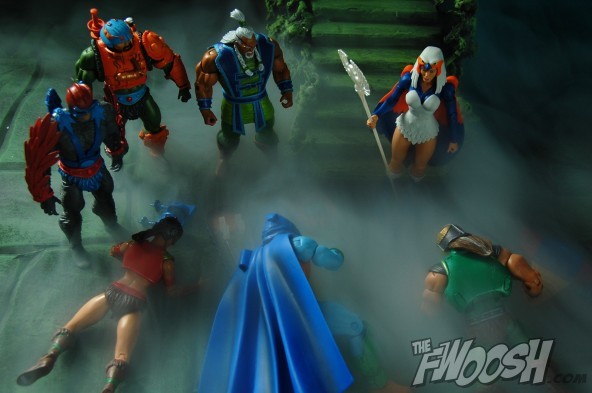 They both have soft loincloths, so their hip articulation is as free as it gets in this line.

Dawg-O-Tor’s neck articulation is limited by his long hair sculpt.  The hair has some flex to it, but not much, so Dawg-O-Tor can’t really be posed looking side to side or looking up.

Sherrilyn has the standard MOTUC articulation except she has the usual missing ab-crunch, common to female figures in this line.  She also has the Battleground Teela hips which are missing a thigh swivel, so that limits her poseability somewhat.  Her ponytail also limits her head movement slightly.

Paint on the Foe Men is very good.  Some of the metallics used in the weapons also make it to Sherrilyn and Dawg-O-Tor’s armor and helmets and also as accents on the Horde symbols.  The sparing use of the metallic paint really helps these figures stand out.

Sherrilyn and Dawg-O-Tor also have some subtle air brushing on their bare arms and legs that helps the plastic look more like skin tone. 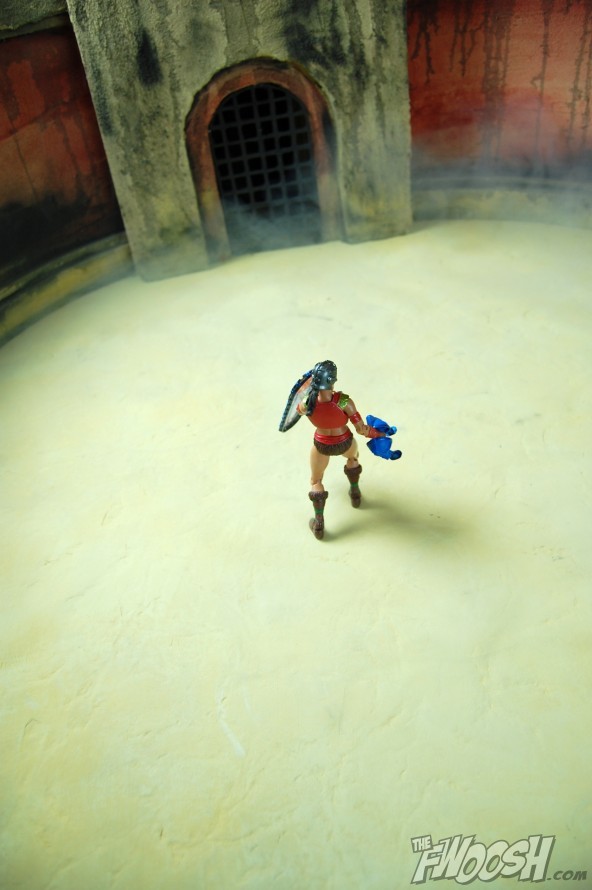 I love the paean to obscurity these three figures represent.  They appeared half obscured by their vehicles on an ancillary product box-art and they still got made!  To some, that’s a condemnation, but for me it’s the highest compliment.  I am so pleased that Mattel made this trio.

I haven’t been pining for this group since the ’80s, but I have wanted this trio since I first saw He-Mike’s Roton Rider custom on the old Fanex boards some years ago.  I’m glad Mattel saved me the trouble of making customs! I also really like that they got to make one of the Foe Men a female and flexed their creative muscles a bit to fill in the blanks in design from the original paintings. 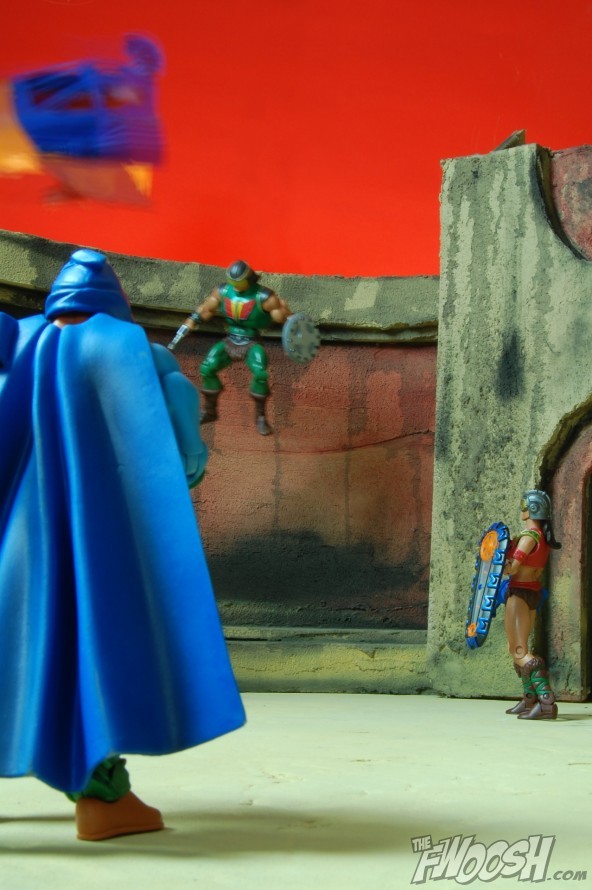 I do feel a bit sad looking at them as a signal of the end of an era in MOTUC.  The lower than expected sub sales last year were blamed directly on this kind of obscure/concept type of figure and lead to a more conservative ‘vintage only’ line-up for 2014.  I don’t think that’s fair to blame dwindling sales of a 5 year old toy line on one set of figures.  Maybe sad isn’t the right word since I want all the vintage stuff too and we are actually getting a Wind Raider pilot figure this month!