As many of you know, and certainly to the chagrin of some of you, I’m a bit of a firearms buff.  I’m not an expert, not even close — there’s just so much to know and so many new things everyday — but I’m decently acquainted with stuff that goes “bang.”  By that same token, I reckon I’m probably some level of action figure buff too. So, while I’m sure there are more qualified candidates out there somewhere, I’ve decided to try and answer some questions that have long plagued action figure collectors:

“Just what the hell kinda gun is that supposed to be?”

My intent here is to give a little insight, a little backstory, and hopefully some identification to the little plastic cutouts that the box contents call “1x Rifle, 2x Pistol,” etc.  I do not intend to turn this into my soapbox, or a “Soapbox discussion” either, so if the subject matter here scares or offends you, I recommend reading something else on this site.  You certainly aren’t strapped for choices… sorry, bad pun.

We’ll begin our trip to the Fwoosh Armory with… Star Wars: The Black Series wave 1.

“But DisThunder! I thought you were going to talk real guns!  Star Wars has blasters!”  Right you are, dumbass! Because those Star Wars movie prop guns had to come from something, and that something was… yup, real guns.

Star Wars figures have been coming tooled-up for decades now, but with the advent of the 6-inch figure line, and some serious effort on the part of Gentle Giant, the gats and heaters of the Star Wars universe have rarely seen this level of detail given to them.

Let’s start with everybody’s favorite desert farm boy. Luke comes equipped with his lightsaber, courtesy of Ben Kenobi, but as a rookie fighter pilot/wannabe Jedi, he wisely brought along a back-up piece, the BlasTech DL-44. 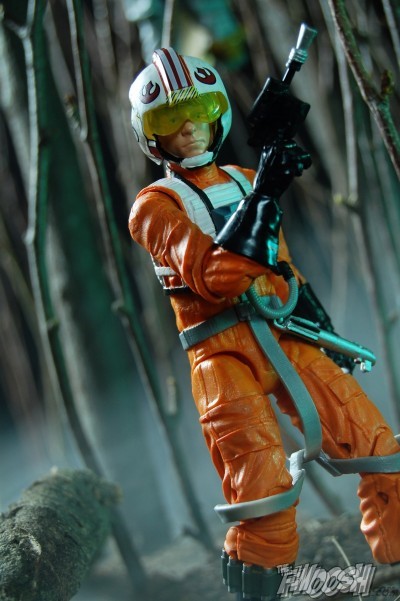 A favorite among Rebels, scoundrels, and bounty hunters, the DL-44 has a reputation for being reliable, accurate, and very powerful, even punching through body armor on some of the more lightly equipped Stormtroopers.  A favorite of Han Solo, Luke also favors this pistol, using it through most of Empire Strikes Back. 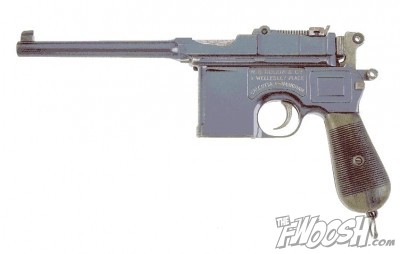 In this galaxy, however, astute gunnies since the ’70s have quickly identified this as a Mauser C96, often called the “Broomhandle,” thanks to it’s famous wood grips, still intact in the Star Wars Universe.  In fact, the pistol stays very close to its original look, with only the additions of a scope, a cone muzzle brake, and some techie parts to take it to blaster. It was a favorite among German soldiers dating back to (their) empire days. There’s lots of variants of this pistol, but most are semi-automatic (meaning one shot per trigger pull), use either a 7.63 Mauser or 9mm caliber, and shoot from a 10-round box magazine.  I’ve had the pleasure of shooting one in 9mm, and I can attest that the reputation for accuracy spans the real and BlasTech versions.

Next, we have the Sandtrooper. You’d think an article only covering two figures would be short and sweet, but Hasbro made sure to pack the Sandtrooper with an arsenal of some of the best-looking weapons in the line. 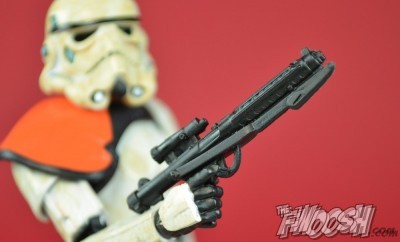 The Sandtrooper’s go-to sidearm is a Star Wars staple: the venerable BlasTech E-11 Carbine.  Standard Equipment for the Imperial forces, the E-11 was the successor to the bigger DC-15 rifles.  Though not often seen deployed, the E-11 has a folding stock, which, if used, would’ve certainly improved the recoil control of Imperial troopers, and they might’ve hit what they were aiming at. There’s many variants used in the Empire, but this Carbine version is the most iconic, though ironically most often used as a pistol.

The E-11’s cousin in our universe is the British Sterling submachine gun. Inspired from the WWII Sten gun, which, while unpopular with some troops, were indispensable Allied weapons; the Sterling was developed during the war to meet the high demand for SMGs for frontline soldiers. As you can see, it also makes the transition very unchanged, right down to that underfolding stock.  The Sterling was an excellent weapon, with solid accuracy at close-to-mid ranges, and could use the older straight Sten magazines as well as the newer curved ones, giving it a solid 34-round capacity.  This was generally built in 9mm, but the design was so damn good, they even made a rifle caliber version. It was an active service weapon with British forces until the 1990s, and can still be found in use in former colonies. The changes to make it the E-11 are purely cosmetic — go watch A New Hope‘s gunfights and you’ll see them throwing blank casings. The Sterling is one bitchin’ SMG, so it’s no wonder it ended up in the Imperial arsenal. I’m sure we’ll see plenty more of these. 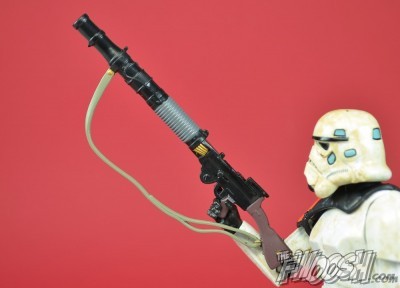 Next is one of my personal faves, the T-21 Light Repeating Blaster.  The T-21 is a squad based rapid-fire weapon, in use since the Clone Wars.  It packs a mean punch, but can only hold enough energy for 20 shots within the blaster, so it’s often paired with a hefty battery backpack to give it more sustained firepower. It’s still lightweight enough to be fielded by an individual trooper, so the Rebels are fans of it as well.

The T-21 is a very vintage WW1 British Lewis Machine Gun — the only thing missing is the pancake magazine.  Interestingly enough, the Lewis is a squad-based rapid-fire machine gun. It was actually designed in the United States by US Col. Isaac Lewis shortly before the war, but was never adopted by the Army — in fact, there are cases reported where Army leadership ordered the Lewis gun be taken away from soldiers, and replaced with the infamous Chauchat gun.  This asinine decision was likely made due to ruffled feathers between Lewis and Army officials.  The Lewis and its trademark .303-caliber 97-round top mounted magazine also was used on vehicles and even aircraft — from the deserts of Tatooine to the freakin’ nose of a SPAD biplane — that’s badass. The Lewis nearly retired following the war, but the desperate days of WWII pushed it back into service. Some could even be found in use during the Korean War.

And lastly, we have the weapon that kind of inspired this article, the DLT-19 Heavy Blaster. 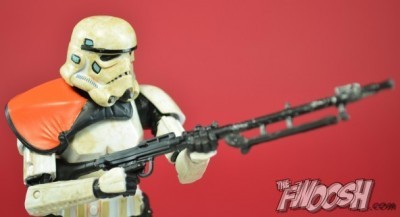 Bigger, heavier, and more involved than the E-11, the DLT-19 was a preferred weapon of stationed troopers on sprawling wide-view planets (Tatooine) thanks to it’s respectable range. Also made by BlasTech — seriously, BlasTech must’ve employed the Star Wars universe equivalent to John Browning — it never achieved the wide-use of the E-11 and its variants, but its long range and impressive knock-down power won it many fans, including Chewie.

The DLT-19 is an almost un-modified (even the bi-pod is still there!) use of the infamous Maschinengewehr 34, better known as the MG34. Fielded by the Nazi Vermacht in, you guessed it, 1934, this light machine gun was one of the very first in its class, and saw use throughout WW2. Extremely versatile, this weapon was used by infantry, mechanized, and anti-aircraft forces, due in no small part to its hard-hitting belt-fed 7.92 Mauser ammo, and its ridiculous 800 rounds per minute of fire.  In fact, its only real drawback was its need for precision manufacturing, something we and the British made very damn difficult once we started bombing the living crap out of their factories. Still, even if it does pretty much count as a bad-guy gun, this was a weapon worthy of respect as well as healthy fear, and postwar it helped to inspire a lot of what makes up modern machine guns.

So that brings us up to speed on just what the hell came in those sexy Black Series boxes!  Hopefully series 2 and 3 will offer up some additional weapons, because I’d love to revisit this in the future. Special thanks for references must go to IMFDB.org, as well as Wookiepedia, for giving me the means to check my facts on this one.

Discuss on the forum!