This Hasbro-IDW partnership, or whatever it is, is looking promising. Getting a voyager-class Springer based on his appearance in IDW’s The Last Stand of the Wreckers felt like a coup, but when Hasbro announced at BotCon that they’d be releasing several more characters based their appearances in the IDW Transformers comics, fans of the comics could not have been more stoked since these versions of the characters have become the versions we now cling to even more dearly than the oft-touted G1 iterations. Trailcutter here falls somewhere in between a G1 update and his IDW characterization. 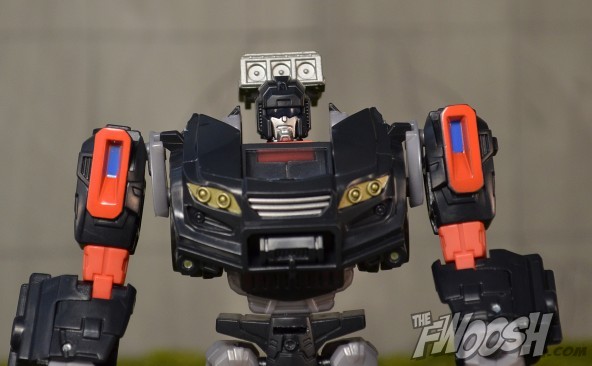 First of all, he used to be known as “TrailBREAKER.” That was the name of the G1 toy and that’s what he went by on the G1 cartoon and in the Marvel comic. In Spotlight: Trailcutter, which, incidentally is included with the figure, Whirl convinces him to adopt the new name while hanging out in Swerve’s bar trying to figure out ways for Trailcutter to be noticed more since he was overlooked for a medal he thought he deserved. So, after 30 years, Trailbreaker officially became Trailcutter. (The name had actually been introduced with the legends-class figure in 2011, however.)

Usually a look at the packaging is a bit of a “Blah blah, who cares” kind of deal, but not in this case. What’s awesome here is that the majority of the artwork is supplied by the comic book he comes with. The new deluxe-class figures all come packed with the figure’s respective Transformers Spotlight issue, which is so great to see. Trailcutter’s issue is a particularly good one, so it’s encouraging to see it potentially reaching a larger audience via the pegs at Target and Walmart. Aside from the comic, it’s a petty standard affair. We get a small taste of his personality through his bio, and his stats give us a glimpse into his effectiveness as an Autobot warrior. He’s looking like a pretty average soldier, so no wonder getting that medal meant so much to him. 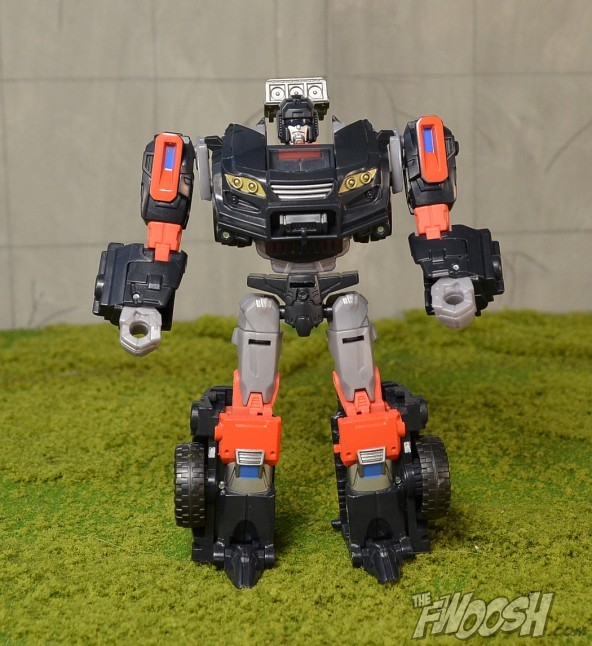 This rendition of Trailcutter actually looks more G1 than it does IDW, which I’m worried may confuse some kids unfamiliar with the comic when they read it. It’s mainly his torso. Since he transforms into his classic earth-mode SUV, it doesn’t quite have the Cybertronian look of his depiction in the comic. His head is pure IDW, even though his visor should be red rather than black. And it’s not even really black. There’s light-piping there that doesn’t work too well due to the placement of the light-piping on the back of his head. When it’s activated, it’s actually more of a white or a bright gray. Trailcutter has always had a red visor, so the decision to NOT give him a red visor here is a little strange.

It’s a clean transformation with very little kibble. He is a victim of the “hollow syndrome” afflicting many modern Transformers figures, but it’s more cleverly integrated here and it isn’t as obvious or obnoxious as it was with the Combaticons/Wreckers. He looks good and solid.

The cab of his SUV mode becomes a shield/weapon that can clip onto either arm, but the shield is a bit of a mystery since one of his key, defining abilities is his ability to create force fields. Maybe the shield comes in handy if he can’t get a force field up in time? At least the twin cannons make it look like an imposing weapon, so there’s that. The entire apparatus makes him look pretty tough. 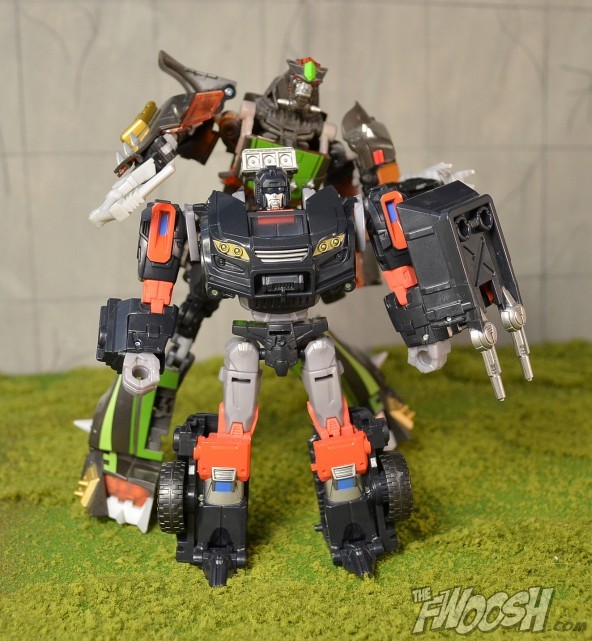 The key thing I noticed as soon as I got him out of his packaging was his size. He’s small. Lockdown towers over him. Well, Lockdown towers over most deluxes, but still. When Hound came out, I couldn’t believe how small he was; he seemed unreasonably small for a deluxe. Now here’s Trailcutter who’s even smaller than Hound. The G1 figure was one of the larger figures in his class and since he transformed from an SUV, that stood to reason. Here, I’m really going to have to take some time to get used to the idea of a Trailcutter being one of the smaller Autobots in the Classics line. I mean, he’s still a really good figure — one of the better deluxes we’ve had in some time, in fact — but his size is definitely something I’m more aware of than I’d like to be. 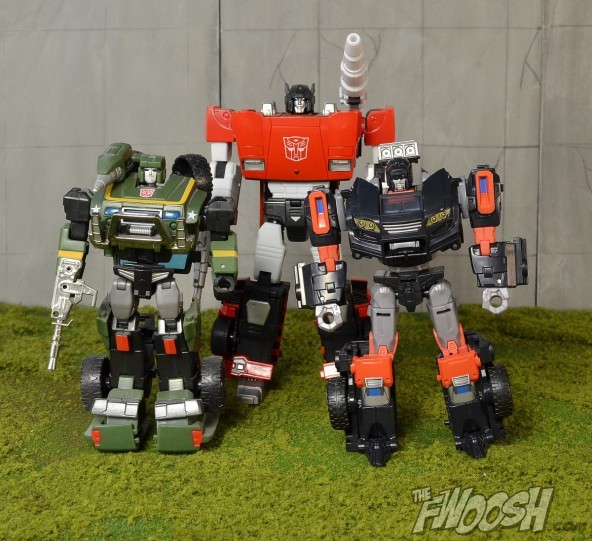 He’s got great articulation for a Transformer figure with very little kibble getting in the way. It’s easy to get him in action poses, but I’ve noticed his shoulders have a tendency to pop out of place at times as I move his arms, so that can be annoying. There are tabs there to keep his shoulders in place, but the plastic in that area is a bit on the soft side, so it isn’t as effective as it should be. It’s not a huge bother, but just something to be aware of.

His SUV mode is a nice update of the classic toy. I’m not sure I wouldn’t have preferred an alt mode based on his Cybertronian look in the comic, especially since much of the deluxe-class figures we’ve gotten in the past year or so have been so heavily geared toward Cybertronian modes, but seeing this SUV mode with his characteristic striping on the sides is giving me all sorts of warm fuzzies. The G1 toy was one of my favorites when I was a kid, so I do have to admit I love seeing this update to it. 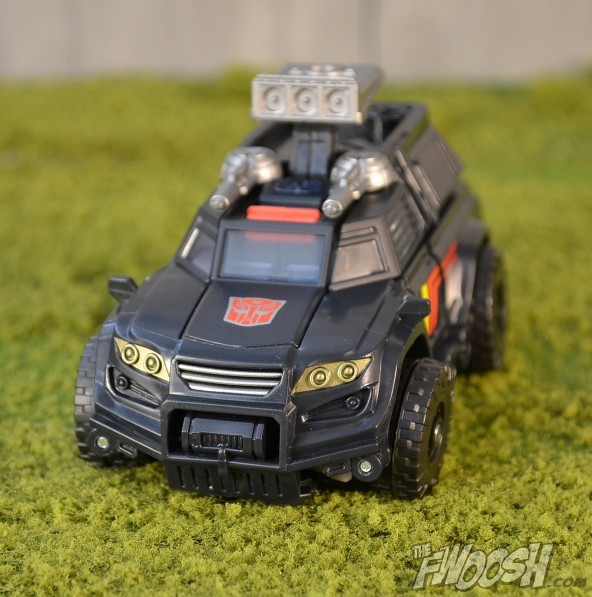 It’s a clean-looking alt mode, mostly. Not everything pegs in as nicely as it should, so he does give off a bit of a jigsaw effect from certain angles. The shield/weapon is a particular pain in this arena. It just does not peg in as securely as it should, so parts of it kind of “float” rather than look like it’s a secure part of the vehicle.  Aside from that, his alt mode looks great, but, like his ‘bot mode, it’s a bit on the small side.

This wave, which also includes Megatron, Bumblebee, and Orion Pax, is in stock at Big Bad Toy Store and is being spotted at Target stores around the country as we speak. I found my set at Target where I was able to get them for the very wallet-friendly price of $12.99 each. Of the four figures in the wave, I’d say that Trailcutter here is the most essential because he’s another member of the classic Ark crew and he’s been a fun character in the IDW comics, so he really should appeal to both sets of fans. He’s sure to be the most difficult to find as well since he’s a “new” character, in a manner of speaking, and not yet another version of Optimus/Bumblebee/Megatron on the pegs. So if you spot him, I suggest grabbing him.