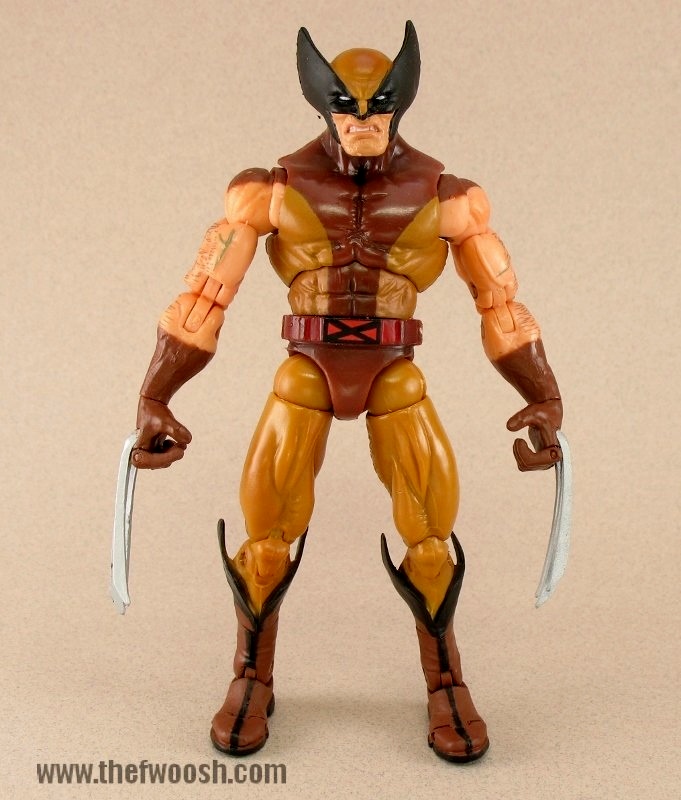 Wolverine debuted in what is by far my favorite costume in the 6th wave of Marvel Legends. That wave nearly drove me insane. For a solid year my Wal-Mart teased and taunted me with acres and acres of wave 5. Colossus and Silver Surfer took up so much real estate I began to think they were relatives of Ted Turner. There was just no way anybody would be buying up all those wave 5 figures, so wave 6 seemed like this unreachable goal on the horizon. It was killing me that not only was Wolverine agonizingly out of reach, but Deadpool and Juggernaut were also nowhere to be found. Knowing they were out there and not seeing them is a special misery.

To rub acid in the wound, at some point Wave 7 started showing up, the figures tucked in between Wave 5. Wave 6, it seemed, had been completely skipped. Ignored, even. 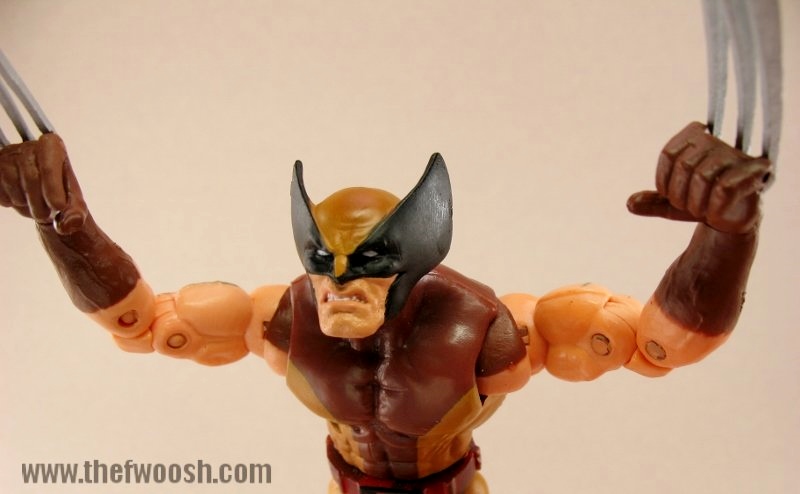 Eventually, through luck, timing, and some Logan-inspired animal fury, I was able to track down a lone Wolverine at my sad, desolate Toys R’ Us, right beside an inconsolable Thomas Jane Punisher that only wanted to be loved. I snatched the Wolverine before anybody else could, and left Tom to sit, and there he would sit for a month at least. 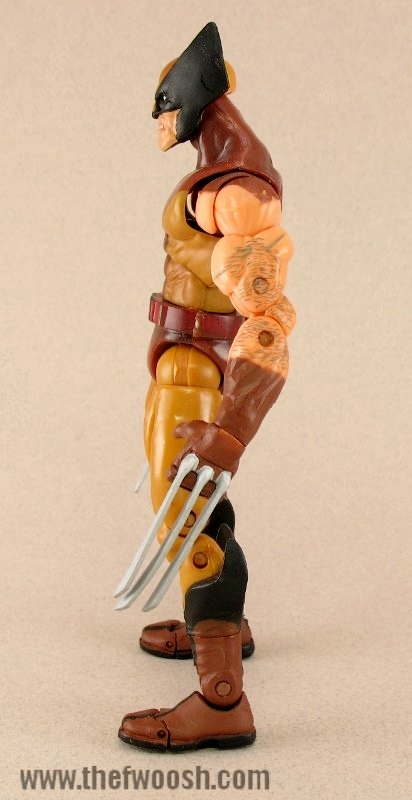 Wolverine’s brown costume is unbudgeable from his position as my favorite costume for him. While his tiger stripe is decent enough and his Astonishing is a fine update of that, and his X-Force is a nice shift of the paradigm, nothing will ever replace the brown costume. If we could ever get his Patch-era black costume with the fishnet eye-mask, I’d have a new number 2 figure, but brown will never let me down.

Before getting the wave 6 Wolvie, the only brown costume Wolverine figures I had were the first Toy Biz five-incher, and before that, Secret Wars. So to say this is an upgrade would be like saying Frank Sinatra was an OK singer. Here was a Wolverine that could finally get into all those butt-kicking, claw slashing, “I’m gonna kill you” poses that no other Logan figure had ever been able to get into before. Those shoulder hinges really added to his wide-armed slashing capability. The now much-maligned finger articulation works in his favor, allowing him to have the curled fist of a claw strike, or to stand with anger burning in his gut, claws out, hands itching to grab someone and gut them. I like the inherent ferocity in that type of pose. 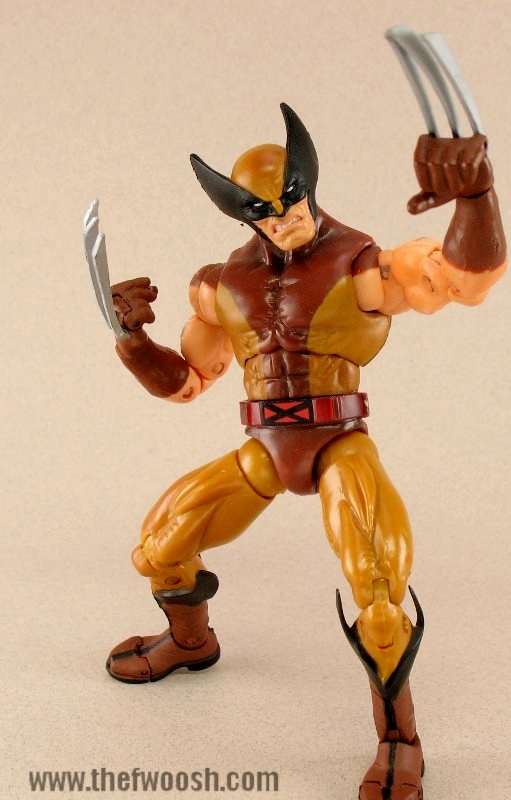 His face sculpt screamed (or snarled) Logan. Sometimes sculptors can go a bit too far in one direction or the other, but this one had just the right amount of tempered ferocity without going overboard with a scream or growl face. My ideal Logan face has a constant attitude, not a constant scream, and this ended up nailing it.

The figure wasn’t quite as short as it needed to be to portray Wolverine’s 5‘3″ status, but it was at least shorter than most other average bodies, so that was great. Plus, just having him bunched and ready to pounce takes away inches and adds to his coiled ferocity. 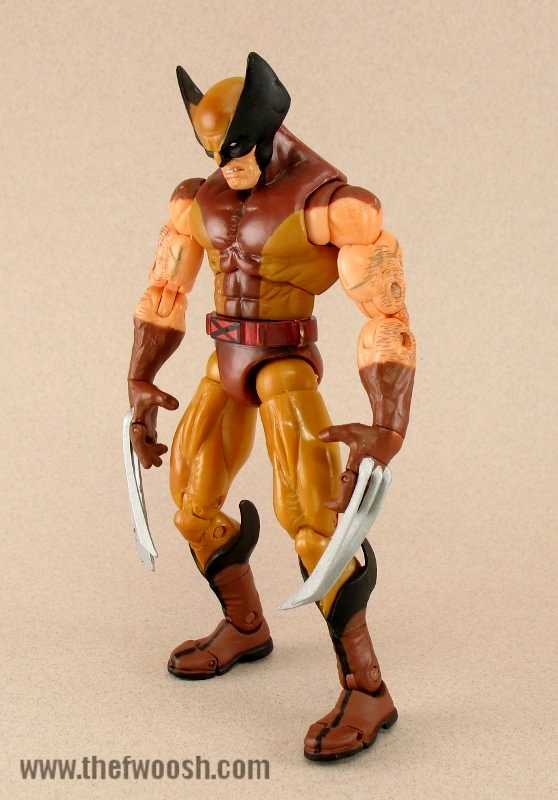 I wish they had been doing alternate heads back then, because it would have been great to get an unmasked alt-head for him, like the Astonishing X-men figure got.

His claws clearly have the tendency to warp, and even heating them, straightening, and them freezing them in place with cold water doesn’t do much to perfectly straighten them out, at least not for long. But you can get them functionally straight enough to look more or less decent. Who knew Adamantium could bend so easily?
Wolverine eluded me for a long time, but when I finally managed to pull him from the hands of a random grandmother who glared at me until I knocked her into a Pokemon display and ran away with prize in hand, he rose to the top as one of my favorite Toy Biz figure, and after playing around with him, he remains in that slot.