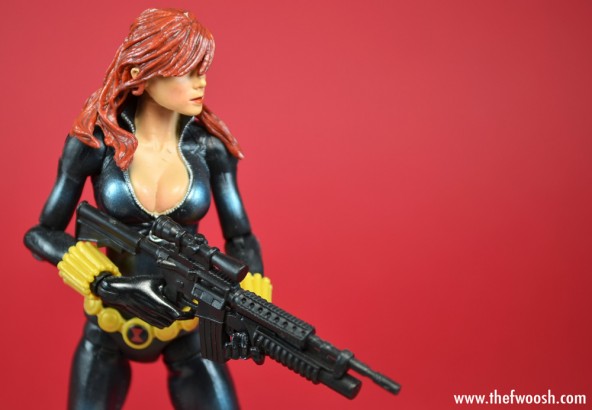 After hitting some of Toy Biz’s more outstanding Legends figures like Rhino and Colossus, I have kind of hit a stride on Hasbro’s side of the fence and have taken pictures of several of their offerings. I got to my brand new Hyperion earlier in the week, but I knew that I wanted to get my current favorite Hasbro female, the Black Widow. I don’t think I am alone when I say that their take on Natasha was a watershed moment for the Legends line. It was the point that the “Big H” finally proved beyond doubt that they can produce a good female action figure. In fact, seeing what they have in-store for the near future shows that they have a better handle on the ladies than most companies going right now and they pretty much have a guaranteed sale from me for any figure that they base off this one.

The Marvel Universe has many strong female characters and I am a great fan of a lot of them, but there are few that I consider to be as “toyetic” as the Black Widow. Her costume, combined with her fighting style, really lend themselves to making the most out of a really nice, super-poseable action figure. So, it is only appropriate that she was the basis for the new standard in ML females. Oh, and it was made all the better by the fact that the figure made amends for the stinker that we got from Toy Biz. I cannot believe how long that butter-faced train wreck stood in my collection. Anyway, she shipped in the two-pack series along with the Winter Soldier and while she did have a grey costume variant, I will let Pabs examine that figure, this entry is for the CLASSIC black costume. That’s right, she is the BLACK Widow, not the GRAY Widow. That title belongs to Aunt May. Wokka, wokka! 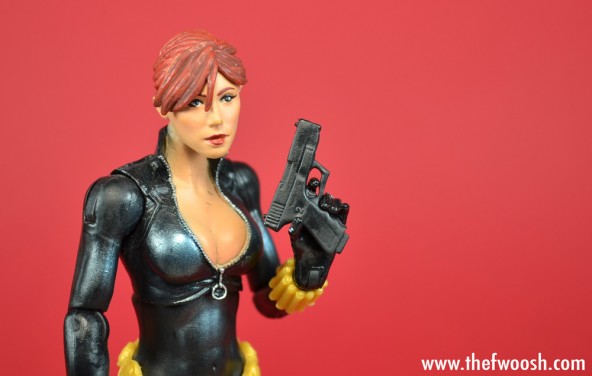 I realize that in comics, like most popular media, for marketing, there is need for creators to always portray their female characters “sexy” and tough with little latitude for anything else. You can have hours of philosophical debates about that, BUT there are some characters that own those traits as part of their long-lived personas. Black Widow, along with characters like up-coming Emma Frost and desperately in need of a re-do Black Cat, are most certainly in this category. So, I guess it is okay to refer to this as a “sexy” figure in relation to the build and sculpt. It still sounds weird calling a piece of plastic sexy. Anyhow, under those terms, Black Widow makes use of a pretty stellar base body. 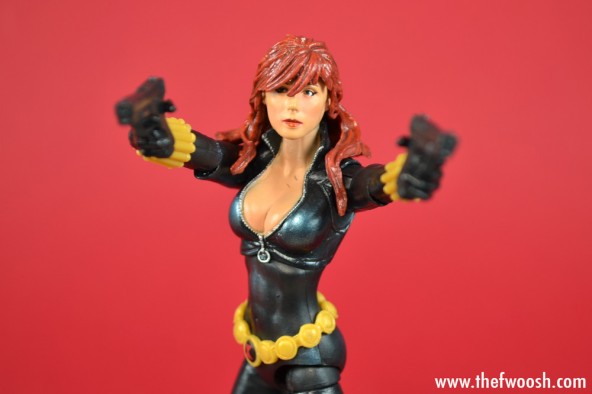 I say stellar because, for the most part, the figure has a pleasing female form while still accommodating a heavily-articulated construction. Yeah, her thighs are too skinny, but she does not have any of the weird hip, torso or arm issues that have plagued her predecessors. See this article for reference on that… She is probably unrealistically svelte, but she has a good female form and you can pose her in some pretty impressive fight stances. Simply says, she looks good doing what she does best: kicking plastic ass. Seriously, it had been awhile since the last time I had taken this figure off of my shelf prior to this photo shoot and I had a ball taking pictures of her, she is very photogenic. 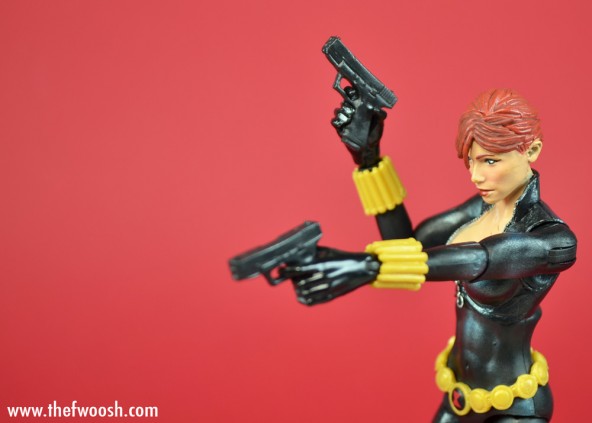 Her head sculpt is also very nice, and very feminine. The set comes with two different and interchangeable heads, one with long hair and one with short. While I am traditionally more of a fan of her long-haired look, I have to say that I think the short version is the better head overall. The long hair sculpt has some funky quirks to it and if you move her head in any direction past looking straight forward, it tends to sit awkwardly or just “hangs” in mid-air. I know this is a relative minor quibble, but I am saying this more for if you dismissed the short hair head immediately based on style, you might want to revisit it now, it really is nice.

Is this black Widow my favorite current female Marvel Legends figure? Yeah, I think she is. I have always liked the character and she is one of the VERY rare cases that you get a great body type AND good articulation instead of having to choose between the two. She is not perfect, but she is still very well done and I am looking forward to getting my mitts on the new Emma Frost and (hopefully) Rogue figures coming out this fall as they are based off of this body. 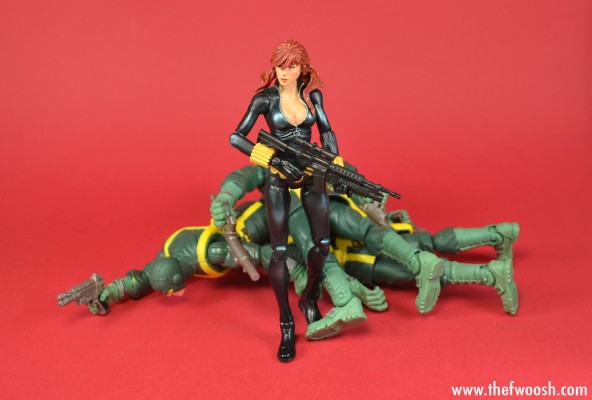