The Stunticons were one of the cooler combiner teams because they seemed to be the Decepticons best equipped to battle the Autobots on their own turf; they were the only Decepticons that transformed into cars, and while that concept may be pretty run-of-the-mill these days, back in the G1 days the idea of Decepticon cars was pretty crazy, and the Stunticons proved to be instantly popular as a result. Drag Strip was always the stand-out character of the bunch just because of his colors. His yellows, purples, and blues really made him stand out from the bunch. So when Down Force, Fansproject’s take on Drag Strip, went up for preorder, I couldn’t get my order in fast enough.

Fansproject have long been considered to be one of the key pace-setters in the third party world, so I was expecting to be blown away by Down Force; however, I think what I ‘m feeling here is just a tad shy of “satisfied” rather than blown away. I like the figure, I do, but it just feels like there isn’t much here to really be excited about. That could be because new upstarts like FansToys and Mech Ideas have released some truly fantastic figures this year, so a good Fansproject figure may seem merely “OK” in comparison. Whatever the case, Down Force does hit some sweet spots, but he misses a few too. 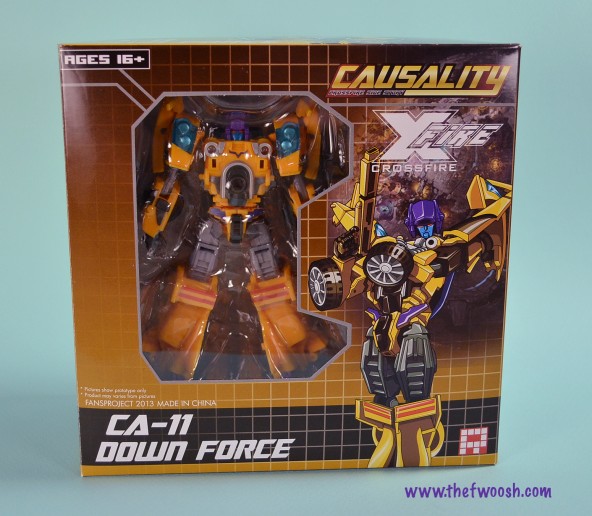 The packaging is uniquely tailored to the figure contained within, and they’ve certainly given Down Force a bit of an anime look in the illustration on the front. The graphics on the back do a good job of selling the figure with plenty of nice, clean images of the figure in action. 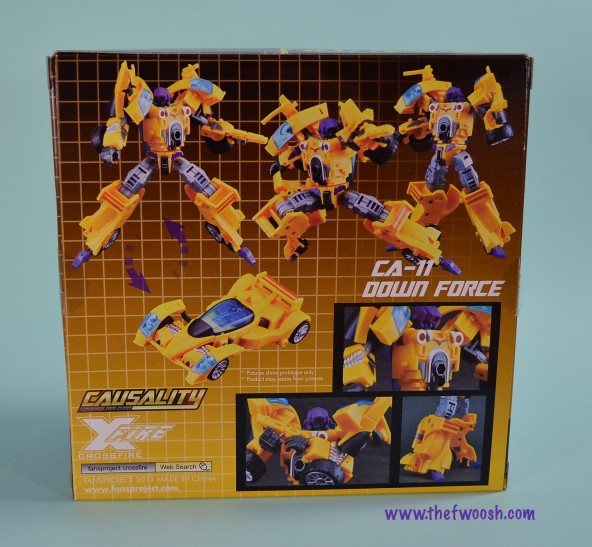 There is no denying that this is one heck of an attractive figure.  The combination of yellow, blue, and purple is as eye-catching as it gets, and he is a fairly close approximation of the original Drag Strip in terms of design, but, really, it’s the colors that truly justify this guy’s ability to be considered a stand-in for Drag Strip. The yellow will always be one of his key distinguishing traits. 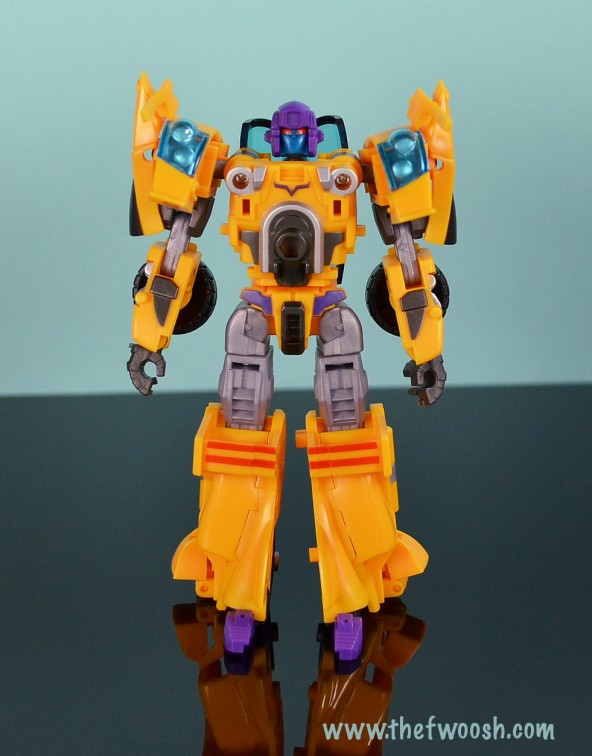 What’s tempering my enthusiasm here a bit may be the kibble. He’s got some nasty bits of kibble on his shoulders that don’t lock in place at all, so care is needed when moving his arms so as to not move it all out of whack. It’s not the worst kibble I’ve ever had to deal with, but I guess I expect Fansproject to come up with a design that would minimize this issue because, well, they’re Fansproject.

His little purple feet are another issue for me. They’re just these tiny purple things that protrude from his lower legs. They don’t really serve very well as “feet” since his weight is mainly distributed on the tire portion of his lower legs, so these little purple things just end up looking a little silly and superfluous as they stick out. Not a deal breaker, but my eyes are drawn to them often due to the color contrast and I would rather they weren’t there.

He can be posed in lots of dynamic action poses despite the kibble, but his knees suffer from a rather limited range of motion. In the above pics, the one second from the right, that is the extent to which he can bend at the knee unless you’re willing to partially transform his lower leg. It doesn’t hold him back that much, but, as is the case with his shoulders, it’s kibble on his back lower legs that gets in the way and makes him more challenging to pose. 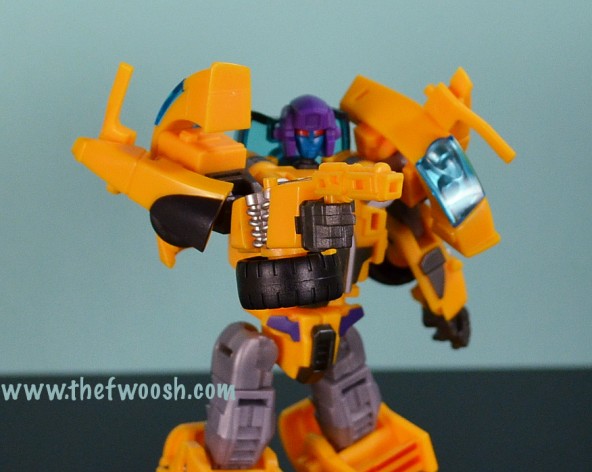 He comes with a small pistol, which is the extent of his accessories. The gun is molded in the same color plastic as his body, so at certain angles it just looks like an extension of his forearm. Maybe a black, or even a gray, would have been a better choice because a yellow pistol? It suggests “Wal-Mart water pistol.” Not very imposing.

His alt mode looks interesting and is a stylized take on Drag Strip’s race car design. I do have to say I prefer this take on his alt mode because it looks a lot less conventional than the typical Autobot car and it further helps him to stand out from his fellow Stunticons. Like the two previously released Fansproject Stunticons, though, his transformation is much more challenging than it should be. He’s a scout-sized ‘bot, and ‘bots in that class are not typically known for their elaborate transformations, but somehow Down Force’s transformation left me scratching my head at certain points, and, naturally, the instructions were little help. 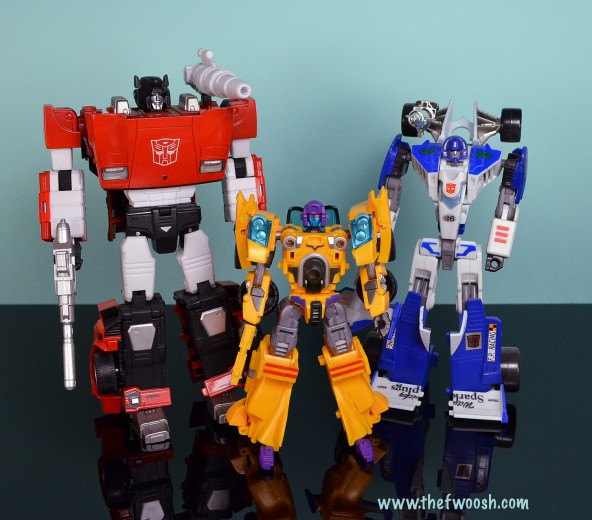 In terms of scale, he’s much smaller than Masterpiece, or even Classics, Autobot cars, so he is a bit of an odd fit. But the original G1 Stunticons were much smaller than most other Transformers cars, so at least Down Force is consistent with that aesthetic.

He also fits in nicely with his growing “not-Stunticon” team. So far the primary colors are really jumping out when these three are displayed together. My eye goes straight for the blues, yellows, and reds and they look great. In fact, it wasn’t until I had the three of them all posed together that I was able to appreciate any of them. They’re honestly not all that impressive when evaluated individually, but all together they look really good, and that gives me lots of hope for Menasor; I can’t wait to see the finished combined look. 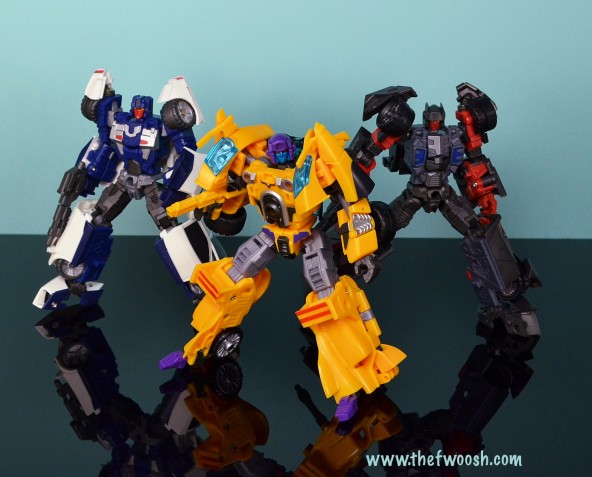 With the way the Masterpiece line is going these days, I’m wondering how long it’ll be until we see definitive versions of the Stunticons released by Takara (and maybe Hasbro). The very idea of Masterpiece Stunticons is just sick, but until that day comes, Fansproject’s take on the team may be the best option going, but because he’s a third-party Fansproject release, he is a bit on the pricey side of things, even for his diminutive size. Be aware of that fact as you shop around.