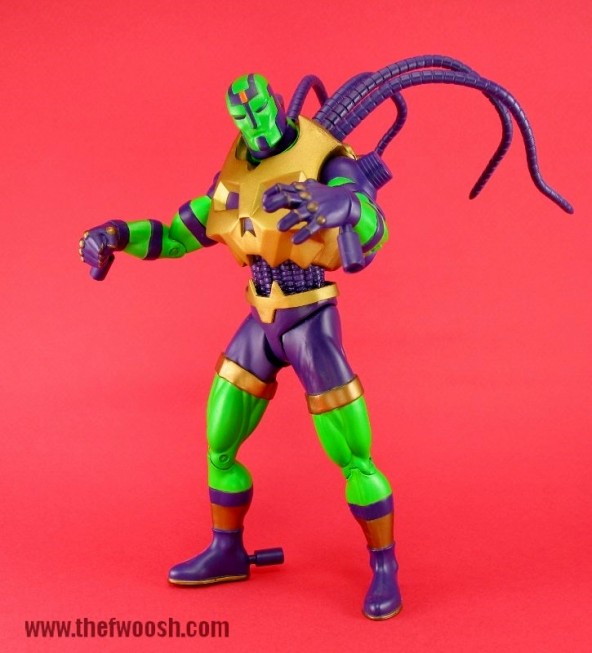 Gaiking is one of my all time favorite animes and I am so excited that DC Direct decided to take a hack at him. But they seem to have made some major mistakes while designing the figure. First, the head is wrong and he’s missing the crosses on his shins… Wait a minute this isn’t Gaiking! Benty! What the hell are these pics? They are Brainiac? What the hell? Brainiac never looked like this! He did? Really? This was how he looked in the Y2K story line? Ah, long story, skip it? Right, well then, hrm. Uh, on to the review.

This is Brainiac, or, better yet, “Brainiac 13” who appeared like this at the turn of the millennium when he attempted to take over the world. It’s a good look, and, as I mentioned before, shares a look with an older anime character called Gaiking who had a big, giant skull-shaped chest. I could name some other anime properties, but that might be beating a dead horse. I never read Superman during this period — I never caught the bug — but I hear the stories were good. I’ll go on record saying that I’m not a huge lover of this look as Brainiac, but I do like this look as a Superman villain.

Benty recently did a review of the Bronze Age Brainiac who is one of my favorite Superman figures. I’d link you to the classic Silver Age Brainiac, but then we haven’t reviewed him (yet). Brainiac 13 is a good, solid figure, and a fine example of the figures that were being produced at the time in 2003. The sculpt is another spot-on job from Tim Bruckner, and without a doubt this is a solid figure. I love the chest sculpt; the big, golden head really does pop and it’s visually interesting to look at. And I like the tentacles, tentacles are cool. Urotsukidōji and Evil Dead made tentacles cool. Really cool.

But it suffers in the articulation department. This figure is built with basic DC Direct articulation:

Yeps, basic articulation. There’s really not a whole lot of play value here. He’s a great vanilla statue, and while Benty did a great job of trying to create some play value in the picture, I’m not feeling it. Nope, it’s not there. But then maybe he’s not supposed to have much play value; doesn’t this guy just sit around and do nothing? He controls computers with his brain? MMMbop! I’m not sold on this figure and I did my best to find some positives in this figure, but, the truth is, the Zombie horde should be having their way with him. Maybe a gang horde-ing with Brainiac 13 and Bunny Foo Foo Ultron as the victims; there’s a rogering that needs to be done!

Once again, thank you to Ibentmyman-thing for supplying pictures for this article! Amazing snaps for sure!

If, for some insane reason, I’ve convinced you to purchase this figure, you can still get him online:

To continue this discussion head to the: