These days that phrase conjures visions of modern Thor, Commander Steve Rogers, and Extremis Iron Man, as well as long-awaited, fan-demanded villains like Klaw and Constrictor. But there was a time, not so very long ago, that Hasbro Marvel Legends Series One meant this: 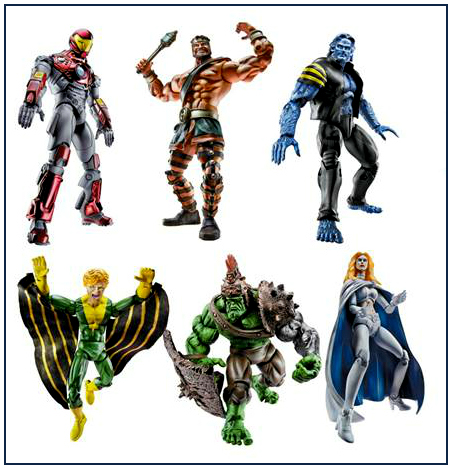 A less-than-inspiring lineup, to be sure. In 2006 Hasbro had just inherited the Marvel license from Toy Biz; determined to hit the ground running, Hasbro opted to use some of the previously sculpted, but unreleased, Toy Biz Marvel Legends figures for their relaunch of the popular line. The result was a series of bland, uneven waves featuring Marvel heroes and villains culled from every corner of the Marvel Universe. Just look at the above pic: Ultimate Iron Man, Movie Beast, War Hulk, Classic Banshee, and Hercules — and Emma Frost. 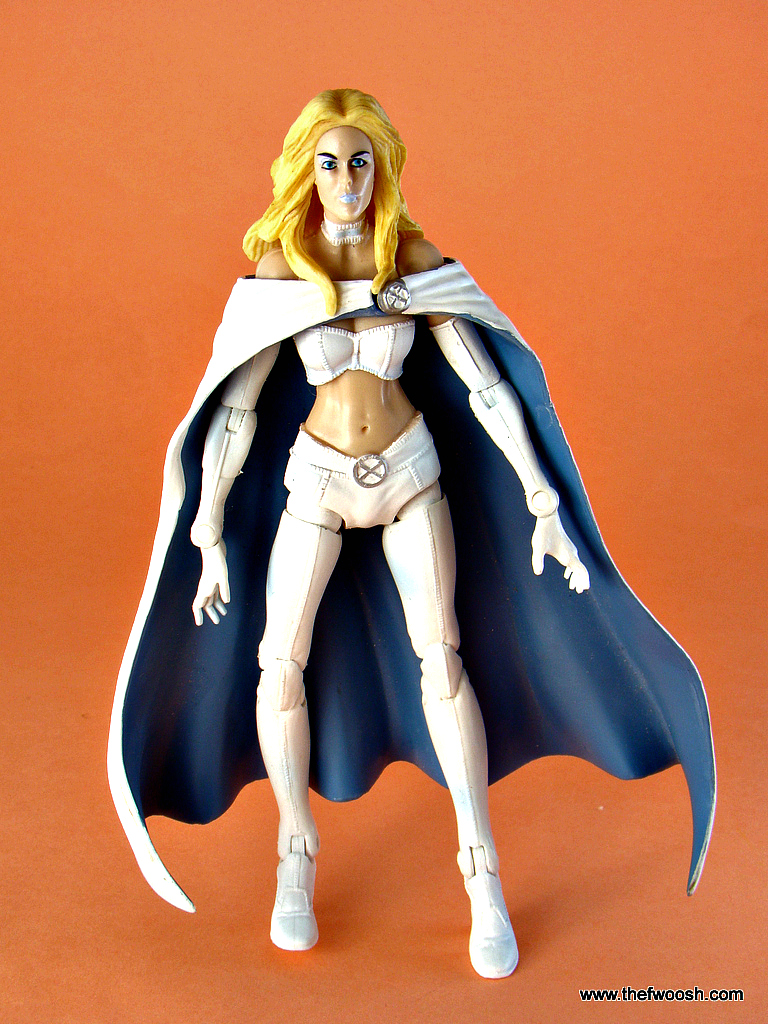 It never gets any easier, does it? Here, have a drink — no, drink it all. Seriously, you’re going to need it. You’d think after all this time we’d be used to the retina-piercing ugliness of this figure, but, no, my eyes are bleeding as I type this. We’ll soldier on because Emma needs to be understood. Together we need to dissect her corpse, subject it to critical analysis, and determine just what it was that killed her. (From the looks of it, starvation.) 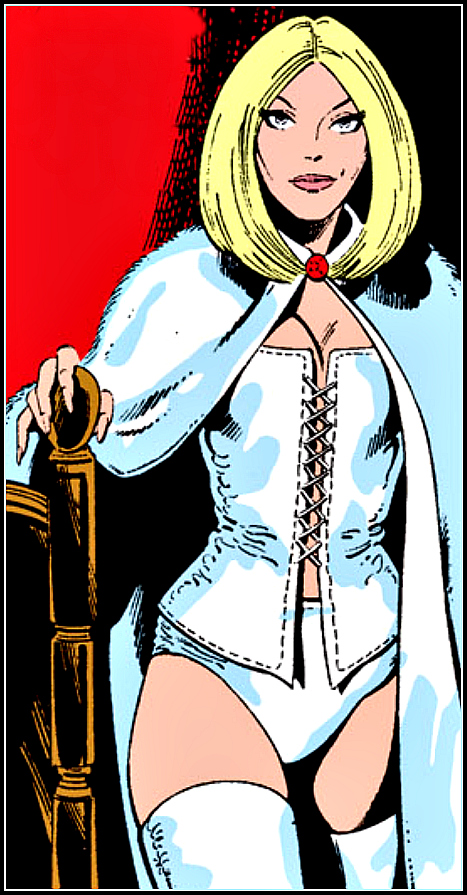 Hubba-hubba, ding-ding! Now that’s Emma Frost. Created by Chris Claremont and John Byrne, this sexy psychic siren debuted in Uncanny X-Men #129 as a member of the Hellfire Club. From the onset, her character was bold, headstrong, and scantily dressed. Gone were the days of full-length, baggy Kirby jumpsuits; White Queen was all woman and not afraid to show it. Dig her hourglass waist, that ample bosom, those creamy thighs! From the get-go this was a sexy, self-assured woman who used her every asset to get what she wanted — and she wanted it all. Her femininity, while fetishized, nevertheless represented a new “liberated” female model for the Marvel Universe and comics readership in general. And yet her figure still ended up looking like this: 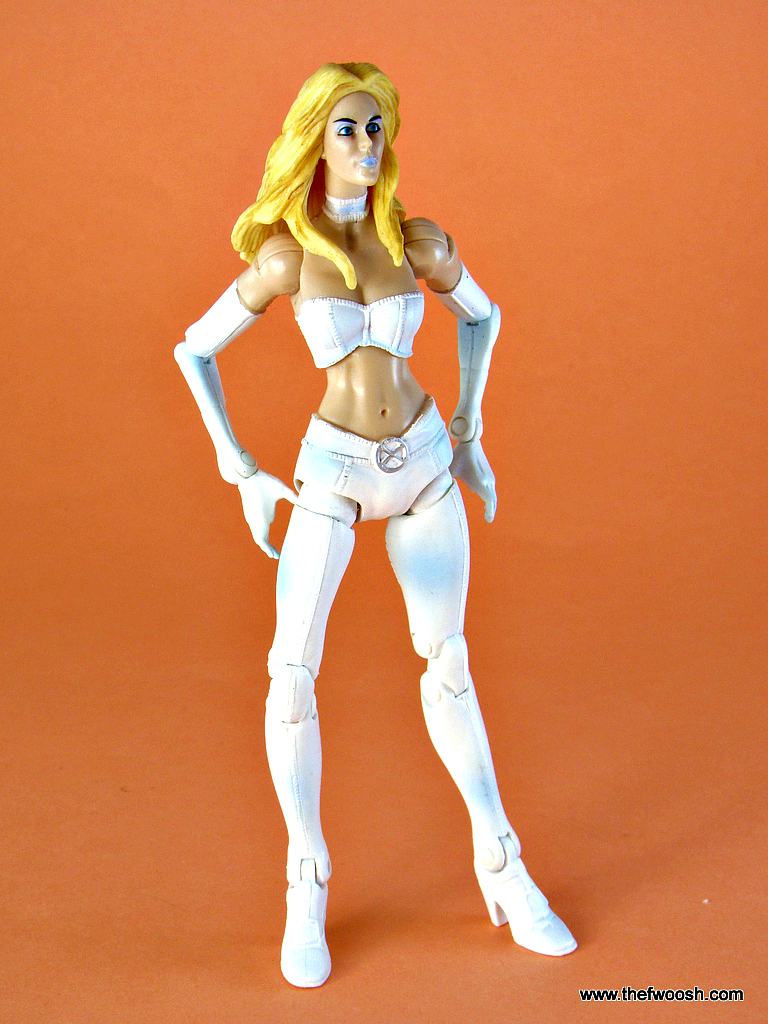 Jeez, she’s been on that hunger strike so long I don’t even remember what she’s protesting. Okay lady, you win. Mutants are homo superior. Now, please, just eat this sandwich. You’re upsetting the children! 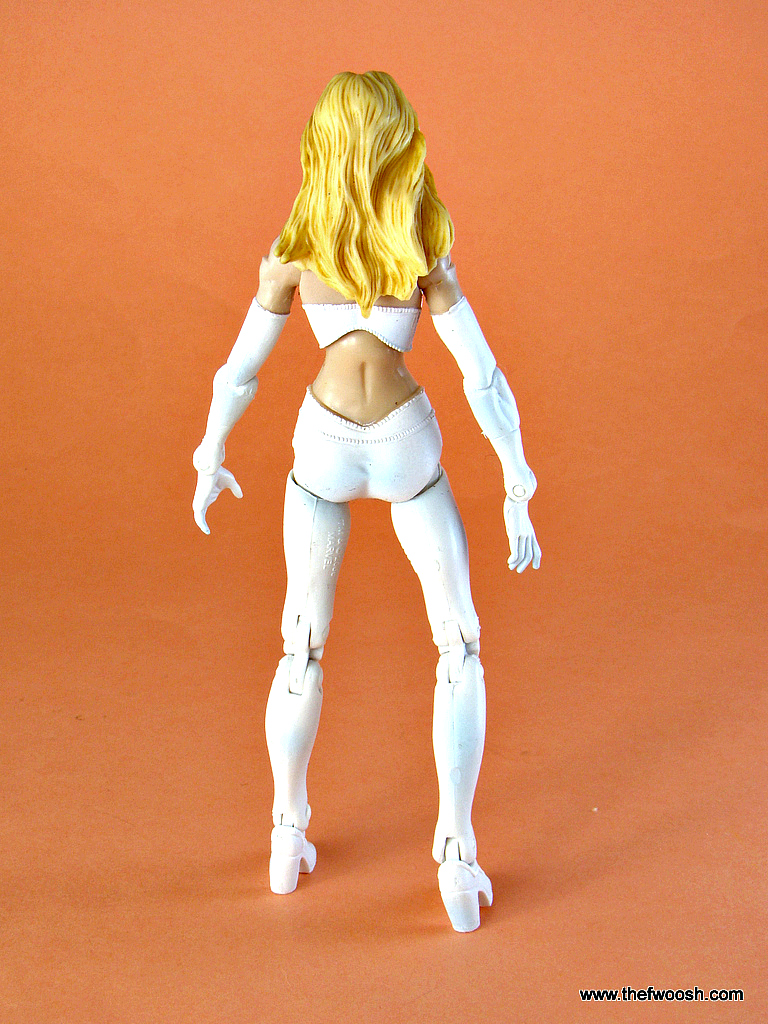 Any better from this side? Nope. Well, unless you’re a diaper fetishist, in which case you’ve found your dream girl. Emma has one unsightly bottom: it’s wide, flat, and uneven, looking more like pancake batter in a plastic bag than the well-toned muscle it’s meant to be. Consider the angry looking off-center crease in the middle of her lower back and the deep, uneven seem of the hiphuggers that appear to be swallowing her midsection and you realize why it’s probably best to leave her cape on. 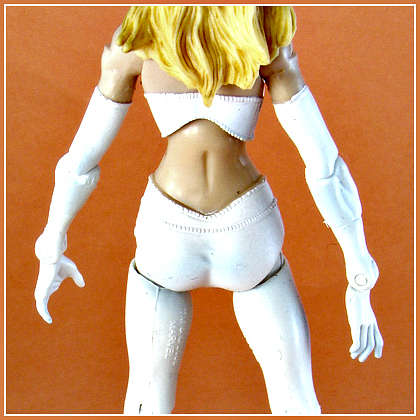 Emma suffers from some seriously inhuman proportions. A glance at her her arms shows her triceps lack any sort of definition, while her brachioradialis muscles are hyper-developed. You might expect this sort of mutation on Ultimate Spider-Man —  it would be where his webbing was stored or something. On super-model-hot Emma, it’s just another puzzling anatomical addition. You’ll hardly notice it, though, thanks to her huge knobby wrists and freakish man-hands. If you need someone to dig you a quick hole, this is your gal Friday. 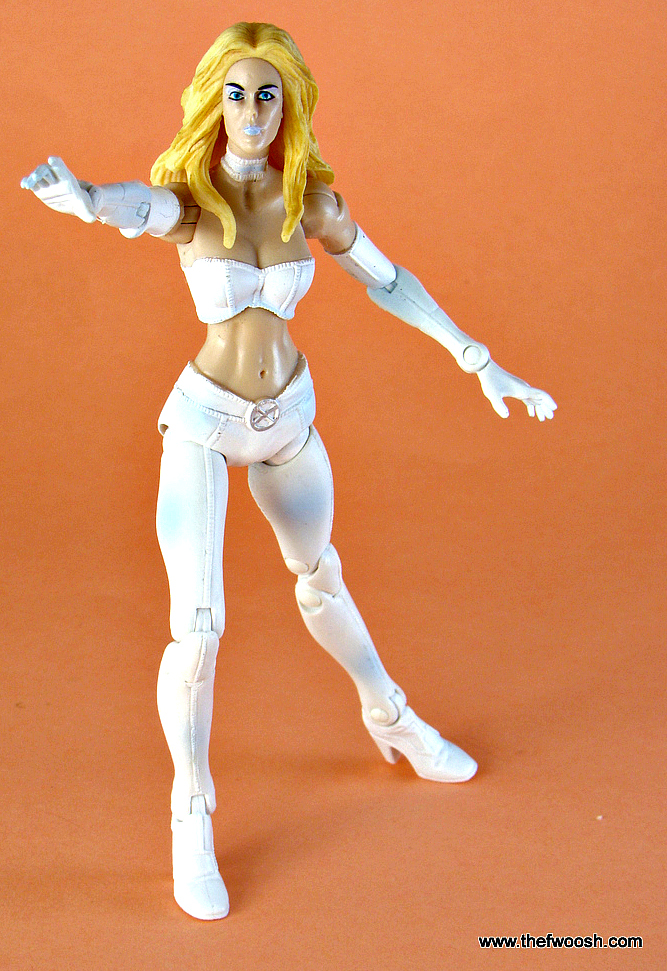 Hasbro had a real problem with the ladies’ hands — they ended up as either bumpy little knobs or over-sized paws. Emma suffers from the later, with her manos huge, shovel-like extensions at the end of her long, strangely tapered forearms. I’m sure they’re meant to be posed as though she’s using her mental abilities, but she really just looks like she’s been typing for hours. Get off the Twitter and subjugate the human race already!

The paintwork is obviously lacking on this figure — all Hasbro offerings of this period used minimal paint apps and it stresses the figure’s weaknesses. Hasbro went light on the detail here, which only accentuates the shoddy paint on Emma’s lips and raccoon eyes. The random bluish highlights on her bodysuit add little, while her dull, almost featureless hair cries out for a simple wash. It’s clear Hasbro wasn’t quite sure what it was doing at this early stage — only time would bring experience and the confidence to do better. 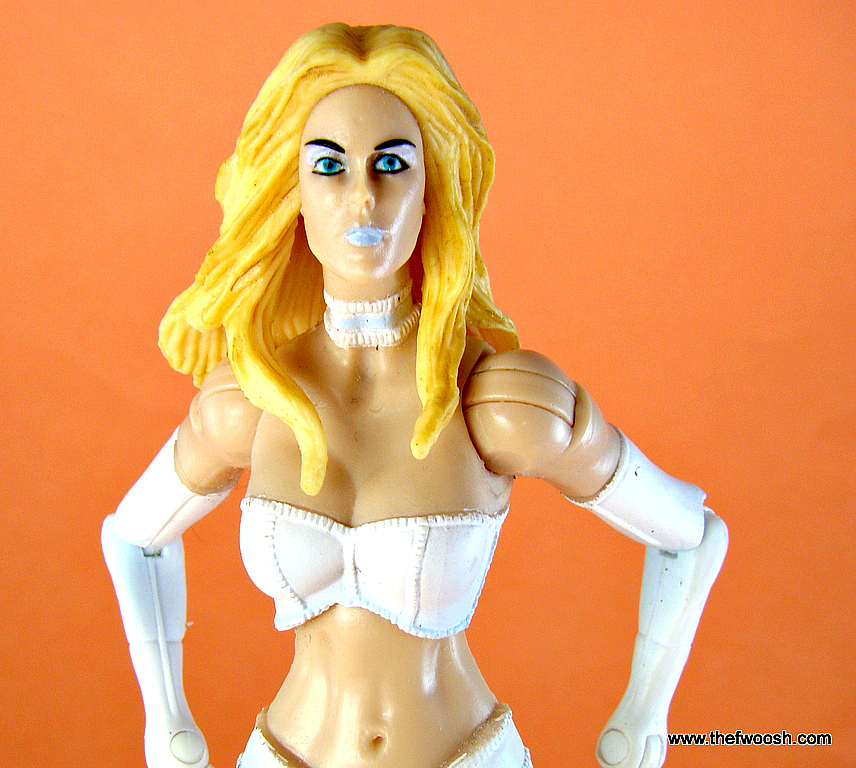 Yeah, I know — I’d rather look at your misshapen waxy navel, thanks. Emma’s is an unkind face — with her lips pursed and her eyes bulging, she looks like she’s ready to launch into a hateful tirade about how her mother was right about you and she should have married that football player who runs a car dealership now. There’s none of the seductive beauty and quiet mystique of the Hellfire Club Queen. Instead, we end up with another brittle, materialistic Real Jersey Housewife. Ready to commit suicide yet? 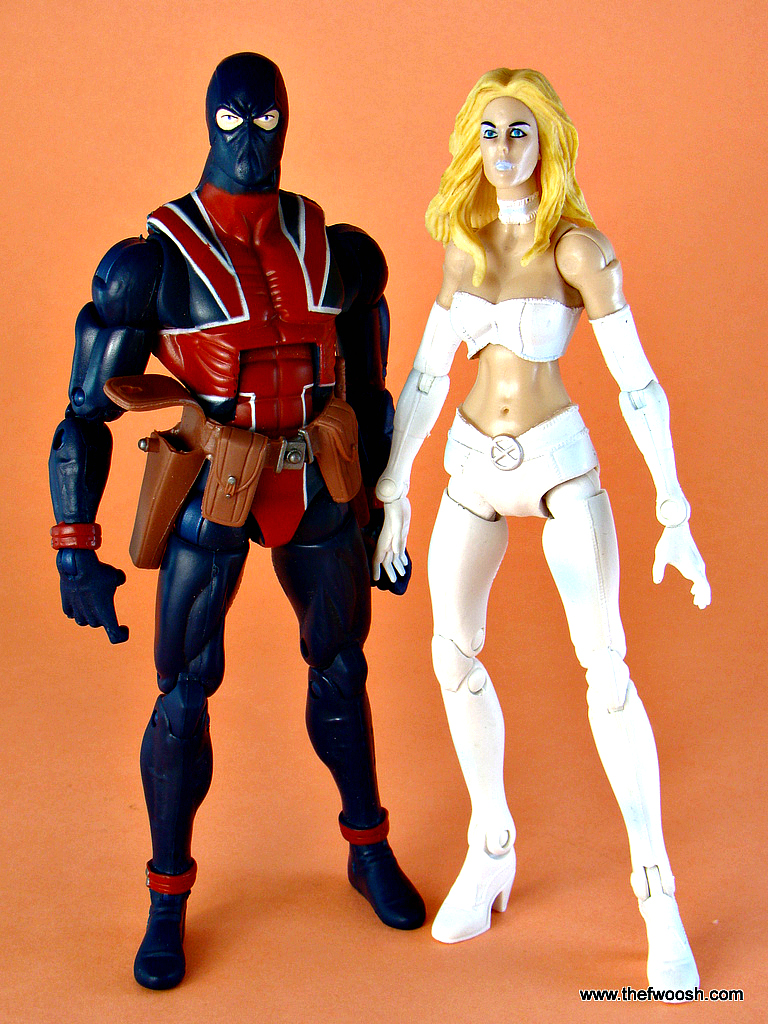 How do you suppose these two got together? I’m guessing they bonded over their mutually tiny freak-feet. Theirs was a union born our of desperation, but that is thankfully about to end. The upcoming Wolverine Legends Emma Frost will fill the same purpose as the 2009 two-pack Black Widow, providing fans a desperately needed upgrade of this consistently popular character. With any luck, all of these old Emma Frost figures will be made into Aunt May customs, and we’ll never have to suffer her bony, acerbic wrath again. 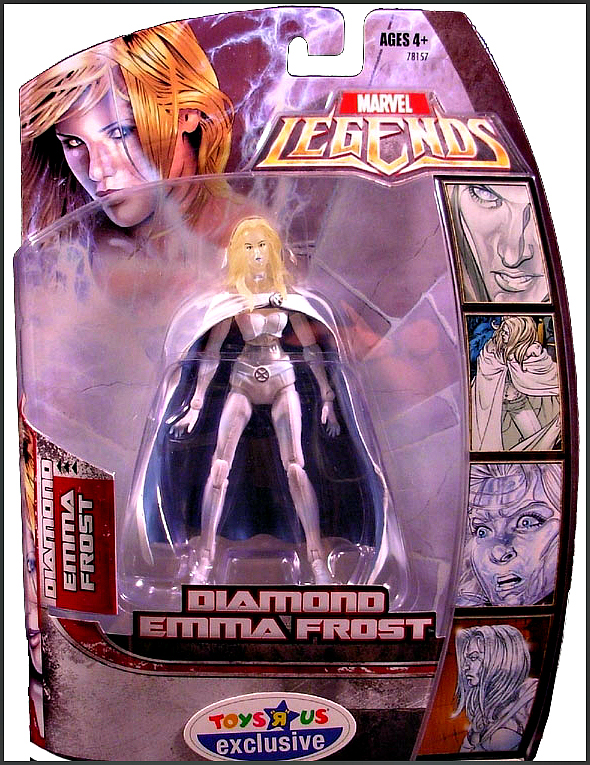 As a side-note, you may be familiar with this Toys R Us exclusive offered back in 2007. It featured a semi-translucent version of the Marvel Legends Wave One figure. My local Toys R Us couldn’t give these away; there were piles of them sitting even after being reduced to $1. What’s sad is, looking at this version of Emma, a lot of the flaws inherent in the original release are de-emphasized by her translucent nature. Sure, she’s still got the bizarre waist and pinched up crack face, but it doesn’t look quite as bad here. Still not worth a dollar, though. 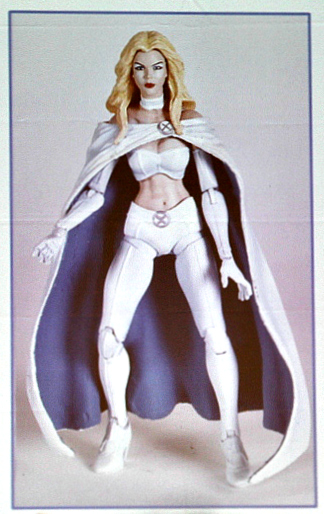 So what were they thinking? It’s hard to be sure exactly what happened, but the problems with Emma were chalked up to “factory error.” Fan backlash was so strong that Dave Vonner eventually apologized for how the figure came out, and that pretty much says it all. As you can see from the above prototype, the finished product ended up being a little… different…  than planned. Too bad. This version of Emma looked more than a little bit like a young Debbie Harry. Marvel Legends Series One Emma Frost was a misstep, but one that led to the reinvigoration of the most popular superhero-based toy franchise of the past decade. She’s a wart we can learn to tolerate all the easier thanks to the new Emma Frost figure Hasbro is delivering in the new Marvel Legends “Wolverine” line.

A note of caution: as you can see, paint plays a very important part in this new Emma’s look. A misstep here or a missed app there and we could end up with the next Madame Hydra — a nice sculpt can only do so much. Let’s hope Hasbro brings their A-game with this new figure. The Queen deserves her place on the board. 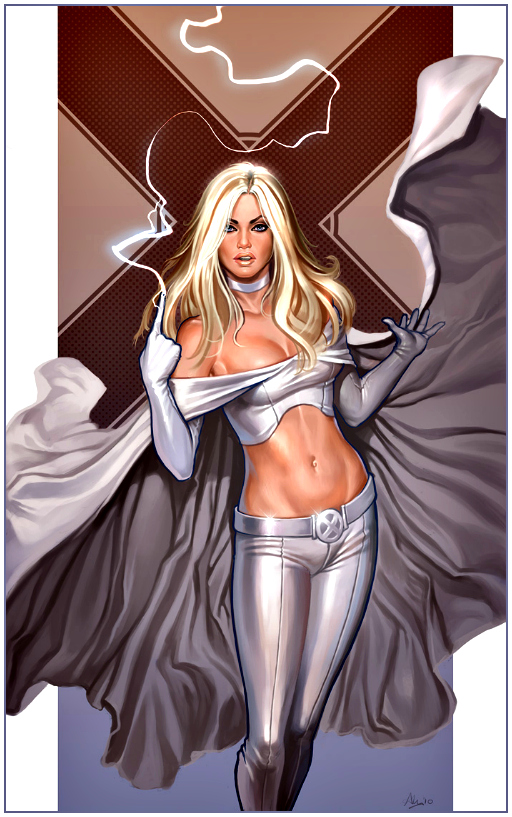 Big-ups to pablolobo for the killer pics.