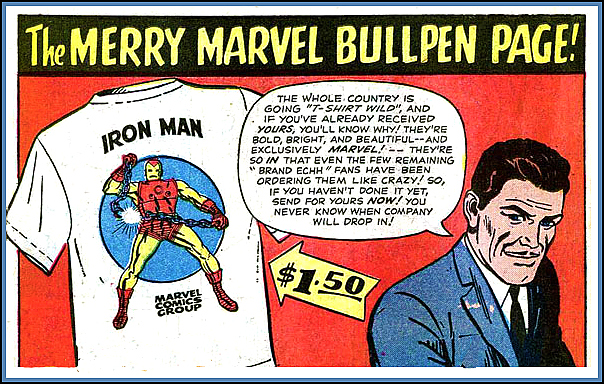 Last week we talked about Iron Man’s decades-long battle with B-list status. By the mid 1990s the tide was finally turning for our hero. While his Saturday-morning cartoon and it’s accompanying toy-line were only moderately successful, Iron Man was nonetheless now one of Marvel’s key players. Toy Biz kept his profile high by including him in the 1997 Avengers: Earth’s Mightiest Heroes series. 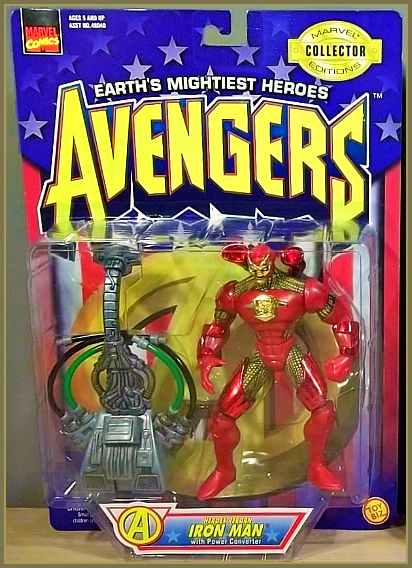 Representing the Armored Avenger as he appeared in Marvel’s Heroes Reborn series, this was Iron Man as toy collectors had never seen him before. His steam-punk inspired redesign and detail-heavy sculpt were notable, but it was his size that was the real story. 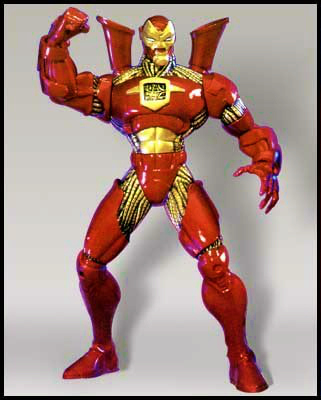 Instead of remaining in Toy Biz’s 5″ scale (consistent since the company had begun producing Marvel figures in 1991), Iron Man had grown an inch. Yes, he had lost a few points of articulation along the way, but the great thing about this figure was it was tall enough to spar with your McFarlane Toys figures. Remember, in the dark days before Marvel Legends, very few toy lines were compatible with Spawn, which was the hot property at the time. As McFarlane was setting the standard with killer sculpts and paint apps, Toy Biz cautiously followed, increasing the scale and detail of their retail offerings. Goofy lookin’? Sure. But this figure signaled the way forward for both Iron Man and Toy Biz in general. They were about to change the world of action-figure collecting forever. But first they had a few side-trips to make… 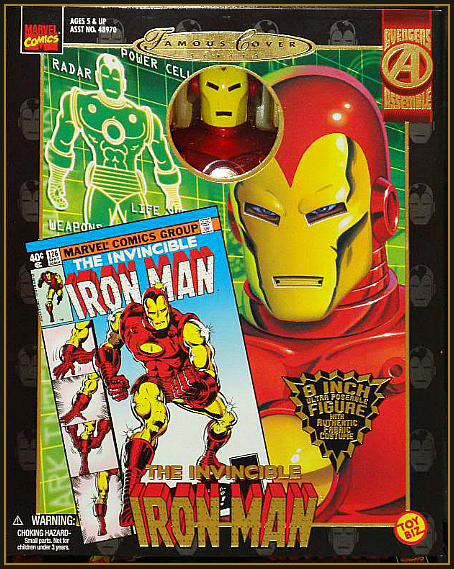 1998 brought us the Mego-esque Marvel Famous Covers line. These 8-inch figures featured sculpted heads and cloth costumes, but they never quite captured the magic of the vintage toy line they emulated. Mego fans cherry-picked the few characters they needed to fill in their displays (Doctor Doom! Wolverine! Aunt May!), but left the rest hanging. The line limped along for a year or two before dying a long, undignified death in clearance aisles all over America. 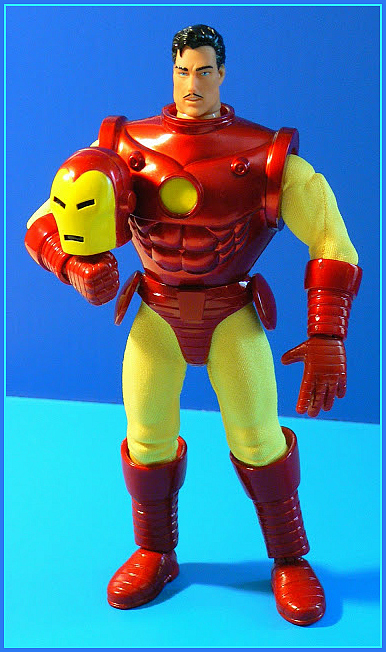 As you can see, Tony is suffering from some seriously weird proportions. His shoulders appear to have been dislocated in the process of suiting up, and his arms aren’t long enough to touch his face, which might prove problematic when trying to drink his breakfast. His head is comically small to accommodate the oversized bucket of a helmet, making Iron Man look more like a bobblehead than an action figure. Still, things were looking up. 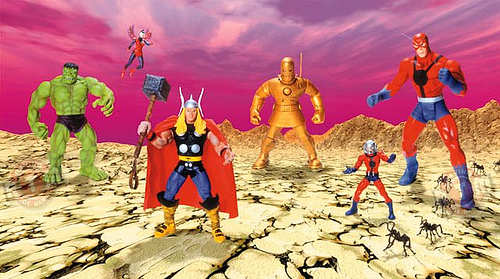 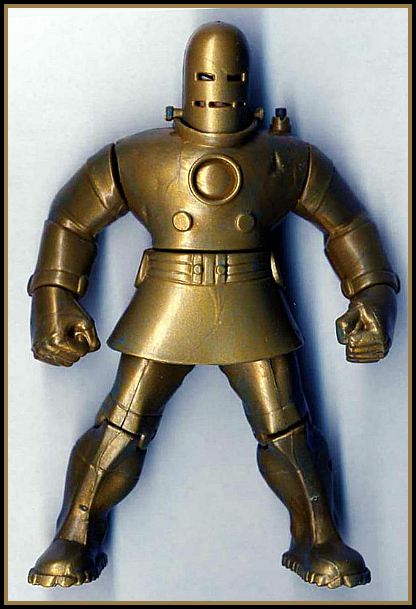 Based on Iron Man as he appeared in Tales of Suspense #48, this figure marked the first appearance of the Mark 1 armor in toy form. There were two versions of this figure: one with a flat-brushed finish, the other featuring a shiny vac-metal paint. Produced in equal numbers, neither version can truly be considered a variant, but collectors seem to prefer the flat-finished version, as it looks less “toy-like.” Go figure.

You always remember your first. I found Hulk at a Target on a bus excursion to the far side of town — a single Hulk figure on a peg-full of Toads. I ignored Toad and took Hulk home. Ha! If I’d only known… 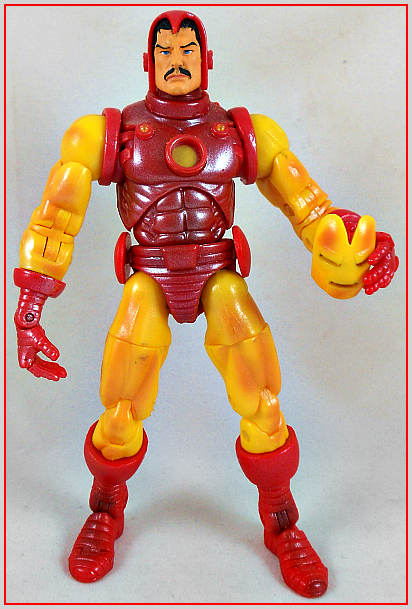 It’s hard to be impartial as this remains my favorite Iron Man figure. I know, it’s an unpopular opinion, but for me, it’s the perfect interpretation of Bob Layton’s artwork. The proportions are decent, the sculpt is dynamite — it really looks like a guy in an Iron Man suit, at least what passed for one back in the 1980s.

Toy Biz understood that if it was going to keep its new line strong, they would have to repeat certain characters. After all, there were at least three versions of Spider-Man in every wave of his self-named series, so characters like Hulk, Wolverine, and Iron Man would be expected to do their share of heavy lifting. Iron Man reappeared in his Silver Centurion Armor in series 7 and War Machine followed in series 9 — both figures were retools of the original series 1 Iron Man figure. Modern-Armor Iron Man appeared between them in series 8 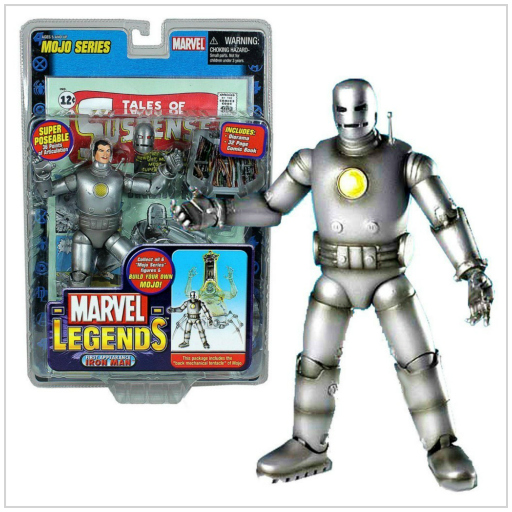 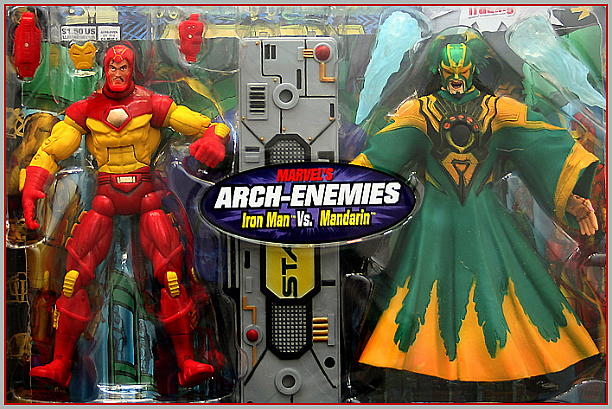 Toy Biz explored other scales, as well. Not only was Iron Man featured in their 3 3/4 inch Super Hero Showdown line, but he received a 12″ version of the Modern Armor in Marvel Legends Icons, as well.  Eventually Toy Biz lost the Marvel license to Hasbro, but not before we received this Marvel Legends Unleashed Iron Man. 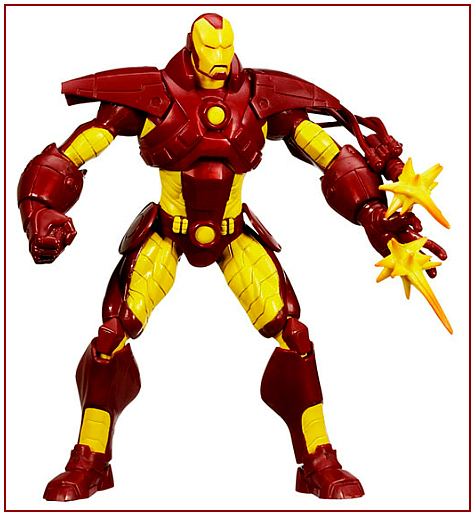 I remember passing on this guy when I found him on clearance for $8 — one of my more bone-headed decisions, to be sure. I didn’t care for the Manga-influenced sculpt at the time, but it doesn’t seem to bug me anymore: there have been so many different styles of Iron Man armor by now its easier to see it as just another version of the suit. The color scheme is a little off and the figure is in 8″ scale, so he won’t really fit with your other figures, but it’s still a nifty addition to any Iron-Fan’s collection. 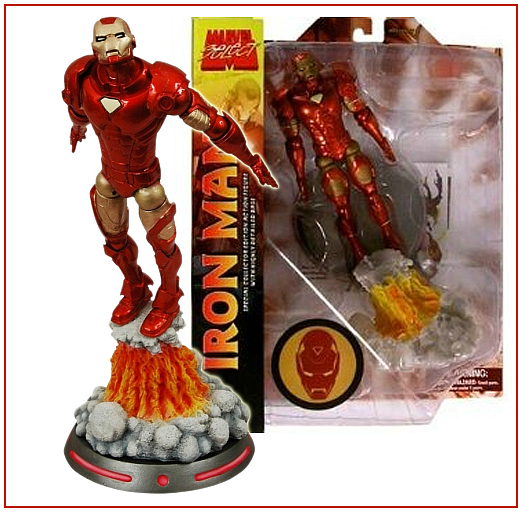 Marvel Select released a version of Iron Man in his Extremis armor. I’ve never been a fan of this figure. The proportions are really odd: he’s so lanky that his body must be absolutely bizarre under that armor. I mean, that helmet — there’s no room for a human head in there! The design of the figure is just wonky: the lack of torso articulation keeps Iron Man standing ramrod straight, making any pose other than standing ramrod straight impossible. Also, those ball hips are brutal. 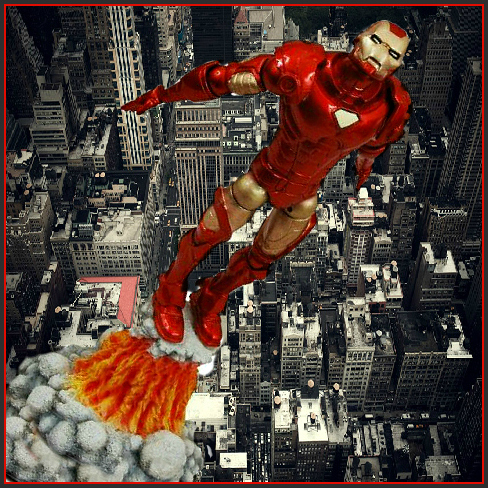 After the success of the first Iron Man film, a flood of product saturated the market. Some of it was good, some of it was this: 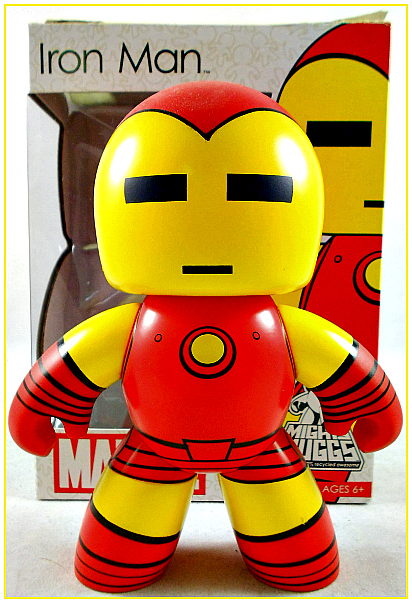 Cute, I guess, but who ever really wanted a cute version of Iron Man? Maybe Japanese schoolchildren? ‘Coz if that’s the case we sure could have used some in Pittsburgh when there were mountains of these things piling up at retail. This was the tipping point — Iron Man had finally achieved the success so long eluded him, only to find that it was as hollow as the cheap vinyl doll that bore his face. The character was ubiquitous in toy aisles around the world, but some nameless thing was lost in the process.

Hasbro made sure Iron Man had a strong presence at retail, releasing several successive waves based on the first two films. The line was quite successful but suffered from over-ordering — there’s still product from Iron Man 2 on the shelves, which says a lot. Also, Hasbro took the cheap way out and repainted the same body over and over again, sapping the property of the unique qualities that had initially set it apart. 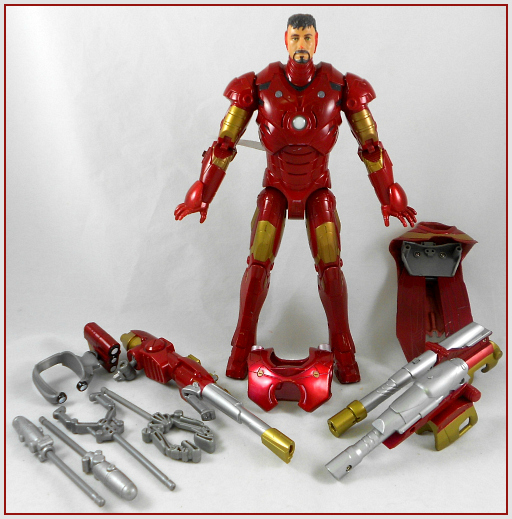 The latest movie keeps the merchandising wagon rolling. While Hasbro has the retail bases covered, higher-end companies like Hot Toys offer product for the more discerning collector. Never before had Shell-Head been treated so well. One might argue these are less toys and more hand-crafted works of art. Every rivet, every dent was represented, every scratch and scrape. Achieving never-before-seen level of realism, the figures appear to have blasted their way off the screen and onto our shelves. 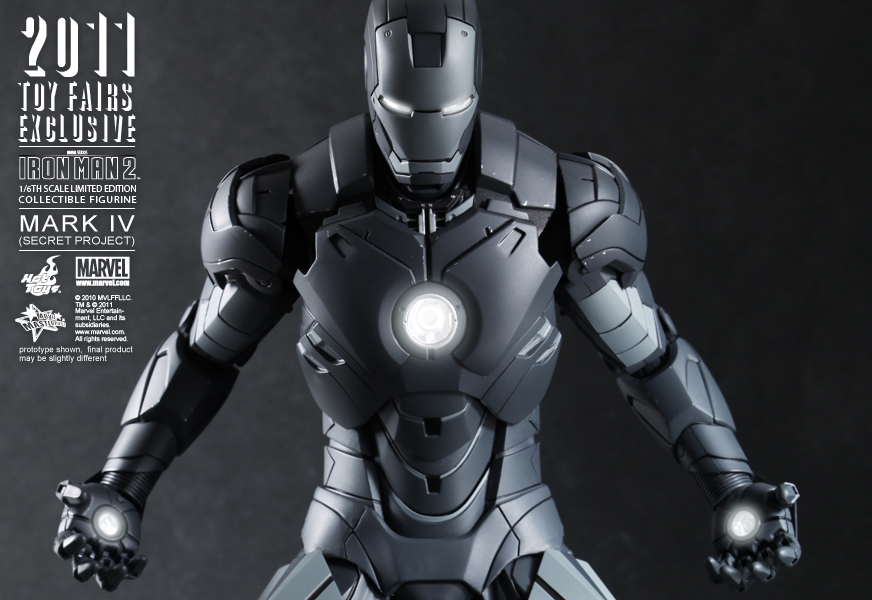 Iron Man 2 doubled the merchandising potential by giving us two Iron Men. Fan-favorite War Machine got his shot in the spotlight and Hot Toys had him covered as well. This 2011 Toy Fair exclusive features light-up repulsors, unibeam, and eye-slits, something a kid playing with his Secret Wars figure in the 1980s would never even dare to imagine. It seems toys have finally caught up with Stark tech.

The ball keeps rolling. Iron Man 3 made 195.3 million last weekend alone — it appears Shell-Head is here to stay. From his humble beginnings as a monochromatic hunk of plastic in the Marx statues line to the latest advance in diecast toy tech, Iron Man toys keep pace with the times. As yesterday’s implausible transistor-power and gyroscopes give way to today’s bleeding-edge tech, Iron Man continues to evolve. At last, Marvel’s Golden Avenger has taken his place on the front line, ready to battle back any menace. You’ve come a long way, Tony.