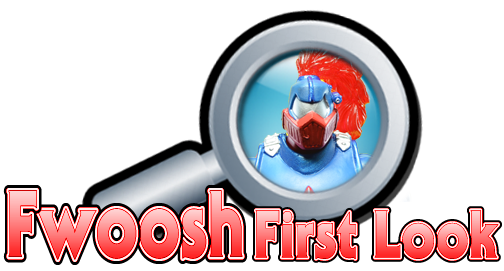 Whew, it is a busy time of the year for Masters of the Universe. In the afterglow (or aftermath) of Comic Con, most of the focus is currently on 2013. They showed Ram Man! And Fang Man! And Jitsu! But it is also the time when subscriptions are being sold and with the apparent decline of subscribers, the Classics line looks like it might be in danger of actually not happening for the first time since the implementation of the subscription. But you can read all about that all over the internet right now (including here). Lest we forget, we are currently in 2012, and the 30th Anniversary celebration is on for all things Masters of the Universe.

We are getting merchandise in forms like never before (I personally cannot wait for the He-Man pint glasses), and Mattel is joining the festivities with their special 30th Anniversary Masters line. This is comprised of all-new characters (plus 1980s contest winner Fearless Photog) created by the Four Horsemen and Mattel team. However, CCO of DC Entertainment Geoff Johns is also a lifetime MOTU fan and he has contributed a new character to the mythos in the form of his childhood creation Sir Laser-Lot. Like all of the Anniversary characters (save Draego-Man), he has caused a split in the fan base, but I think that his introduction in the recent digital comic has helped some people come around as far as the potential of his character is concerned. What about the figure, though? 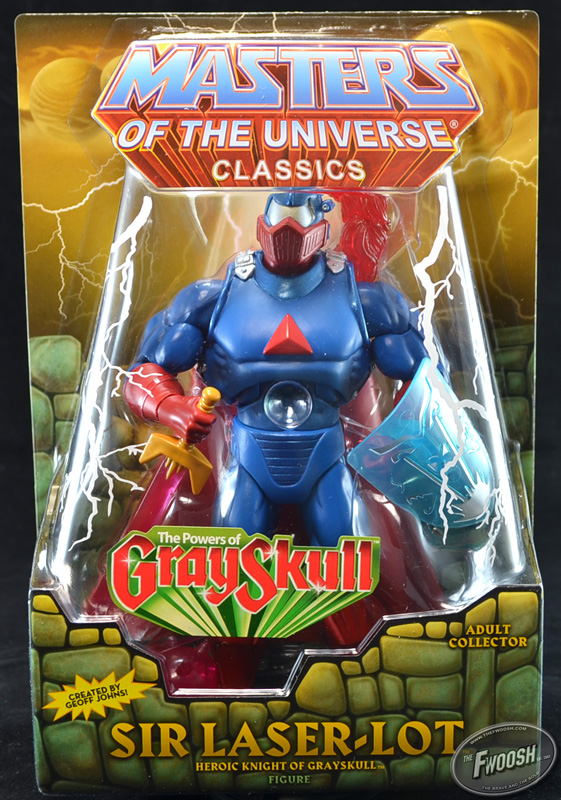 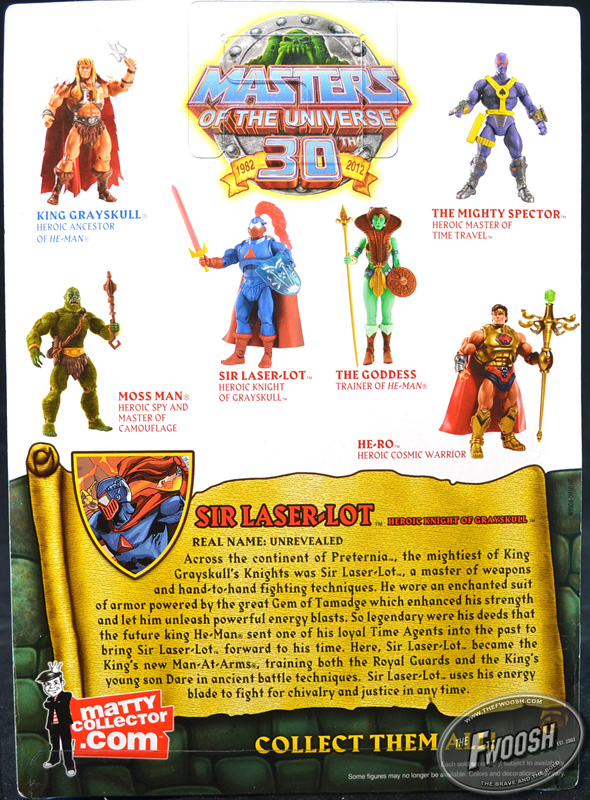 Well, even with the–very–recent push to get all of the vintage characters over the goal line, I am actually all about introducing new characters into the Masters mythos. I think it is one of the best ways to ensure that the property will continue to grow, and there are a lot of talented people out there that have never really had the chance to take a crack at these stories. Plus, even though I am insanely jealous of those that are getting new characters into the line, it has to be really, really awesome to have a character of your creation join the likes of He-Man, Skeletor, and all the rest. 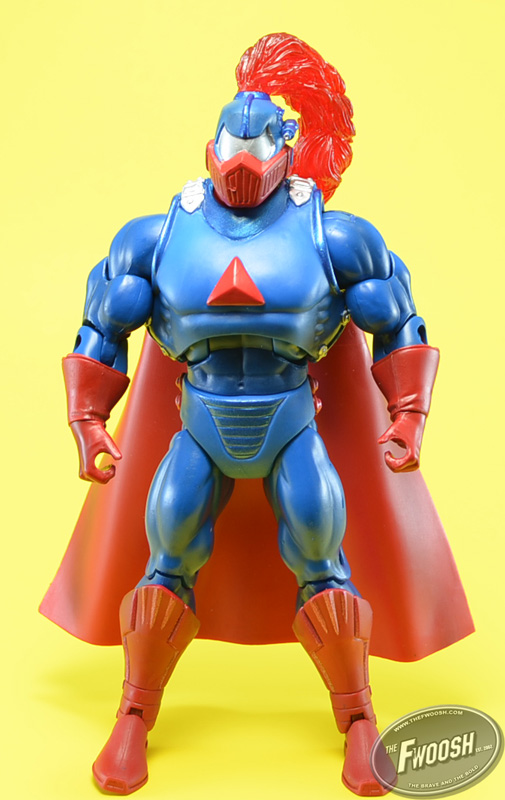 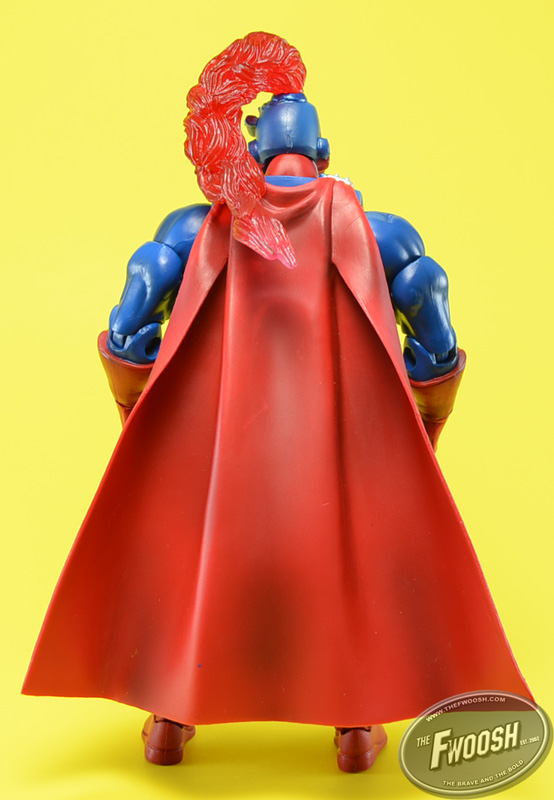 Sir Laser-Lot (or SLL as I will probably end up calling him most of the time from here on out) has been established as Preternian in origin, but thanks to the time stream and the Mighty Spector himself, SLL was plucked from the past and brought to the Eternian future where he eventually serves as Man-at-Arms during the reign of King He-man. Personally, I like the Preternian origin and I will be putting him with King Grayskull, Tytus and He-Ro in my display, but I am not so sure he has a place in the current/future time in my canon (I know how much you love that phrase). However, stories are what you make of them, and the toy is what really counts, right?

I actually really like the idea of knight characters in the Masters world. We have space cowboys, ninjas, rock dudes, and slug men, so knights are welcome for sure. Extendar has been the stalwart since the ’80s, but guys like the Red Knight and maybe even General Sunder (ahem, NAME DROP) are also potential knights that can bring some chivalry to the current times in Eternia. King Grayskull needs a knight too, though, and I think SLL foots that bill nicely and he brings some technology and color variety to a section of the display that has a lot of browns and golds.

Honestly, I think most fans are taking this figure (based on promotional shots) on its own merits when it comes to the overall look, but I think there has been some muddling of design and color scheme. To be perfectly honest, I think the design is great and he actually makes good use of several existing parts in the MOTUC bank. If you were to look at a picture of SLL in black and white, I think the design of the figure is right on with what a techie Eternian knight should look like. He has some very classic cues in his helmet and plume, but those are amped up in the details. For instance, his plume is cast in a translucent red plastic (as are his mace and sword) to add to the “laser” theme of the character. Also, he has a little side scanner/laser cannon on the left side of his helmet that I have never noticed before. I think it is a cool little detail that, again, brings the completely unrelated concepts of knights and lasers together cohesively. He is armored and has a cape that he borrowed from He-Ro, and the Bow boots gel with the knight theme better than furry boots probably would. I also dig the jewel on his chest, but I am very sad that it did not make it through production as translucent to match his plume (it is just painted red). I know that this had to be done because clear plastic is made of ABS and armor needs to be soft PVC, but it is still sad to lose a little detail like that along the way. 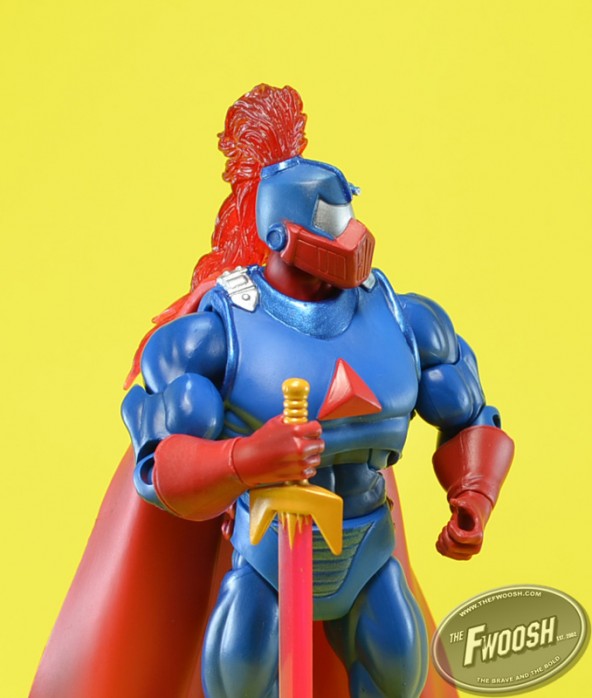 A teched-out knight with hard light laser weapons is cool, right? Where’s the beef that people have with him? Well, simply put, I truly believe it is all in the color scheme. Well, maybe not the scheme itself as the almost-shimmery blue and reds go quite well together, but in the application of the colors. Let’s face it, even the most ardent supporters of SLL will find this guy to be a wall of blue. I mean, when looking at him from the front, there is nothing but blue from the chest jewel to his boots. If MOTU is known for anything, it is for being a very colorful property, almost garish at times (oh, let’s face it–a lot of the times); SLL certainly has the bright colors, but, well, to paraphrase Shawn and Ed, he needs more “red on him.” 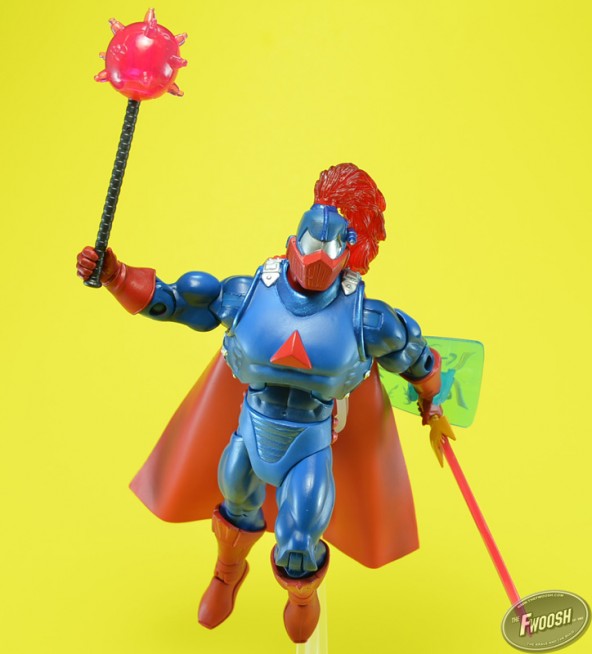 SLL has the Roboto/Man-E-Faces trunks and there is a lined section on those that is just begging to be painted red on this figure. I think that would have gone a long way in breaking up the blue and would probably have made him even more eye-catching. There was talk around Toy Fair 2012 when he was revealed that some revision was going to be made to some of his paint scheme, but either due to time or creator request (I honestly cannot remember which) it was not meant to be. The good part is, if you really want him to have some red on his trunks, it should be a pretty straight-forward customization. I am not saying that a dab of red paint will fix all of the issues that some fans might have with this figure (some might genuinely just not like him, which is their right), but, for me, it might pull the figure together in a more balanced color application.

Aside from the head, SLL’s weapons are my favorite parts of this figure. I think they are all really, really cool and well thought out to support his theme. It would have been easy to give him a laser gun, but instead he has (what I assume to be) a hard light sword, mace and shield. The sword has a yellow hilt and translucent red blade to match his plume, and his mace matches as well. I think the mace is actually my favorite of the three accessories and my knees get weak thinking about how it would be a perfect reuse piece for Lodar (if we can ever get to him now). The shield is blue, but a much lighter and clear blue than what was used on the figure. The crest/design on the front is pretty intricate and it seems to tell a story through the pictures. Since his name is currently unrevealed, we might get a story with the name at some point. Keep reading the bios!

Well, he would not be a 30th Anniversary character without some controversy, and even though he won’t see release for a few more weeks, SLL has already had his share. Personally, I dig the idea of tech knight from Preternia and, like I said, we might get some future character development in future digital comics, but I completely understand some folks’ distaste for all of the blue. There is a lot of it to be sure, but maybe a dash of red paint here or there will help alleviate some of that. I do think his weapons will be a hit with a lot of collectors and even if SLL does not have a place in the mythos for some people, I think his weapons probably will. We are now in the second half of the Anniversary line with only Cy-Chop and the very metal Castle Grayskullman left, but I would be interested to hear your thoughts about the line as a whole, so please leave a comment below. Also, don’t forget to pick up your 2013 Club Eternia subscription, the fate of the line may rest on it!

*Thanks for reading and thanks to Toy Guru for pulling this figure out of the future time stream so we could bring you this First Look. Like I said, hopefully Geoff Johns will flesh the character out more in future comic installments.