FIGURES IN A HALF SHELL! NECA, Super7, Playmates, if it possesses Turtle Power, talk about it here.
Post Reply
120 posts

starguarded wrote:Dang... I collect Super7 TMNT but I am gonna get this for sure. They really nailed it with the design and the sculpting details. I also like that it's different from the vintage Universal Monster figures (where Raph was the Mummy and the Metaluna Mutant) so if Super7 does them, they'll be different than this one. This will be my first NECA TMNT

I’m sort of in the same boat. I decided to stick with Super7 because I like the turtle variants and playmates designs, but I’m going to have to grab this one. Hopefully FrankenRaph scales well with them.

Even if they did fit scale wise, they are not going to be remotely similar in style or execution. If you don't care about them matching in that way, it's always possible.

I hear you, but I feel like one of the coolest things about collecting turtles is all of the different styles. I just don’t want my Raph to tower over my Sewer Samurai Leo.
Top

Well I don’t have a problem with $35 when he’s that size. Looks incredible.
Top

Through the magic of Photoshop... 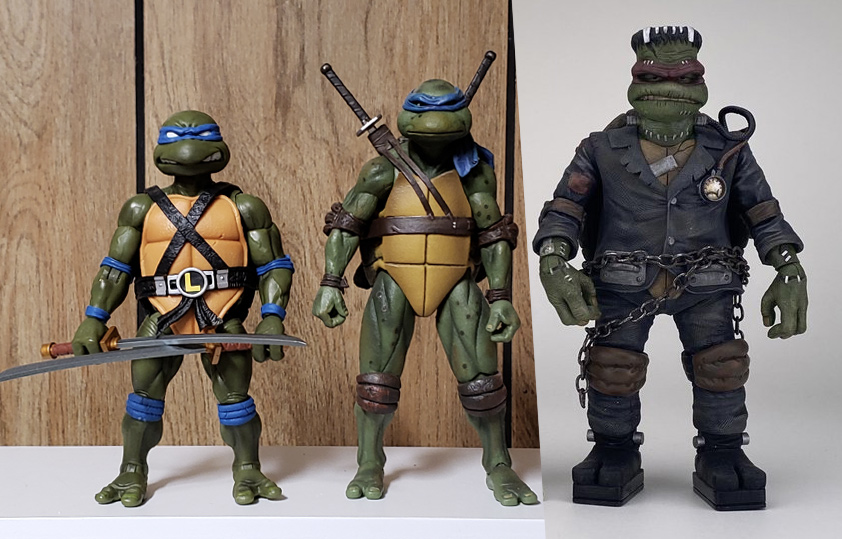 So unless they've intentionally made Raph-Frank a bit of a behemoth, they might not look great with Super7. I had high hopes for this as well. But..I'm still gonna get them, they're plenty cool enough even if they're their own little display.
Top

Don't forget, Franken-Raph has those big lifts on his boots so the rest of the Turtles will probably scale shorter.
Top

Phantom of the Opera would have been a better choice. Splinter would likely make the most sense for a Wolfman.

Metaluna Mutant is a well known and very popular design. I can see why Playmates went with it back then. Aesthetically it's just so striking.
Top

I could see Splinter as Mummy. He's an older character, so make him the ancient monster. Rat nose peaking out from the wraps.
Top

Metaluna Mutant is a well known and very popular design. I can see why Playmates went with it back then. Aesthetically it's just so striking.

Well given that turtles don't have hair it'd make the most sense. That old Playmates Wolfman Leonardo looks like a shrub with a mask on. Likewise I doubt a combination wolf-rat creature in a torn up maroon kimono with hand and feet wraps would look that off. Which could even lend itself to a Mummy, or pseudo Rat King look for him, as someone previously mentioned. That said, I don't think Metaluna Mutant is that widely known among those with a passing knowledge of the Universal Monsters. I'd seen it before but wasn't aware what it was called or what it was from given that it just looks like an out of place space alien. Thus far it's the only one on here that people have had to ask what it is.
Top

I never remember what movie it's from, and have never been into UM, but even as a kid, I recognized that thing from all the old UM posters. *shrug* 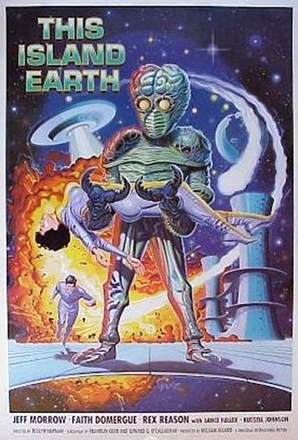 Metaluna Mutant is a well known and very popular design. I can see why Playmates went with it back then. Aesthetically it's just so striking.

Well given that turtles don't have hair it'd make the most sense.

I mean, Turtles don't do Kung-Fu either. I think you're overthinking it.

I'm just thinking a rat and a wolf don't look THAT much different, especially in a mutated form. And it's not like Splinter isn't usually wearing tattered clothes and things.

No doubt Metaluna Mutant isn't as known as some things, but it's a pretty well known and toyetic design which is no doubt why it was chosen. I still think it's one of the most dynamic TMNT UM figures.

I've heard there's been some issues recently with UM using the Mutant though, although I can't confirm if that's true or not. But apparently he's been slowly phased out of UM stuff the past year or so and even though there's been new merch of him, it doesn't always have the UM logo.

But Universal can be kinda tight lipped on these things, so it could just be all fan speculation.
Top

Yeah I agree, splinter would just be a hulked out rat. He’s already brown and hairy, how could they make him enough like a wolf but still look like a rat? Vern was a wererat already which works because he is not normally a hairy beast. And that’s the point of turning into a werewolf. You were not brown and hairy before and now you are. The Leo werewolf was my favorite of the old figures. It works.

And if you don’t follow Varner studios on Instagram, they’ve been sharing the old concept drawings for the playmates line because of the excitement for neca’s line. I’ll post as they upload them. Seem to be doing one a day. Hope they do all the way through series 2. 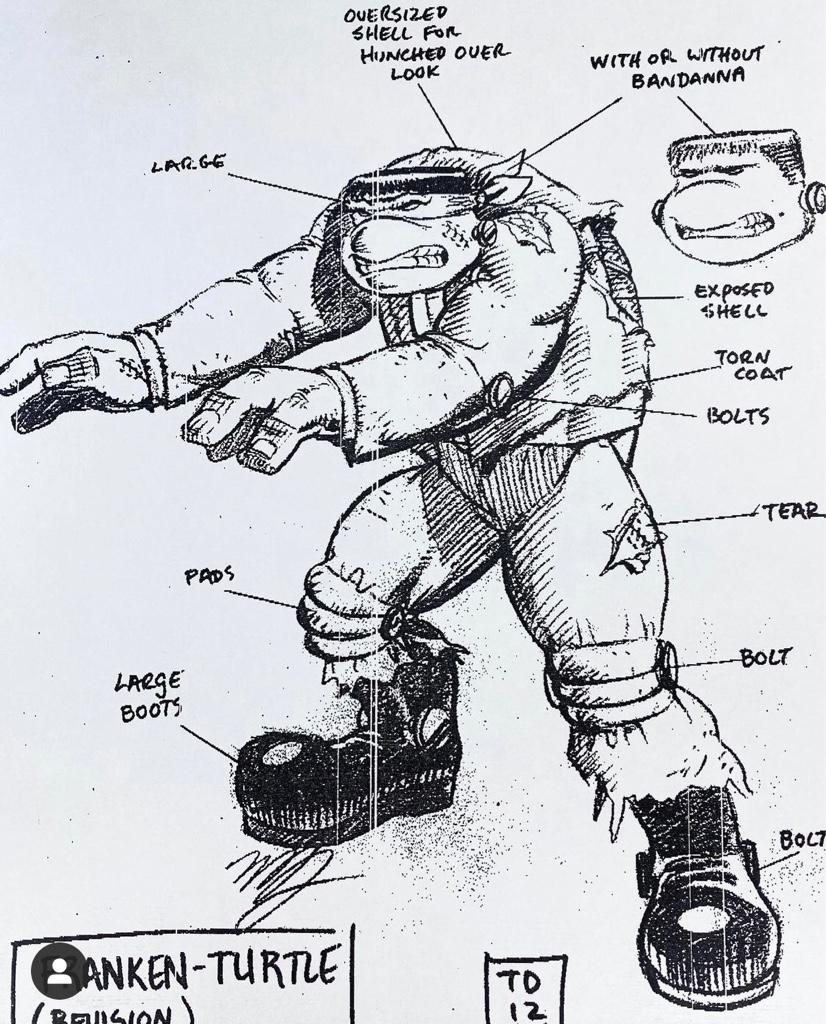 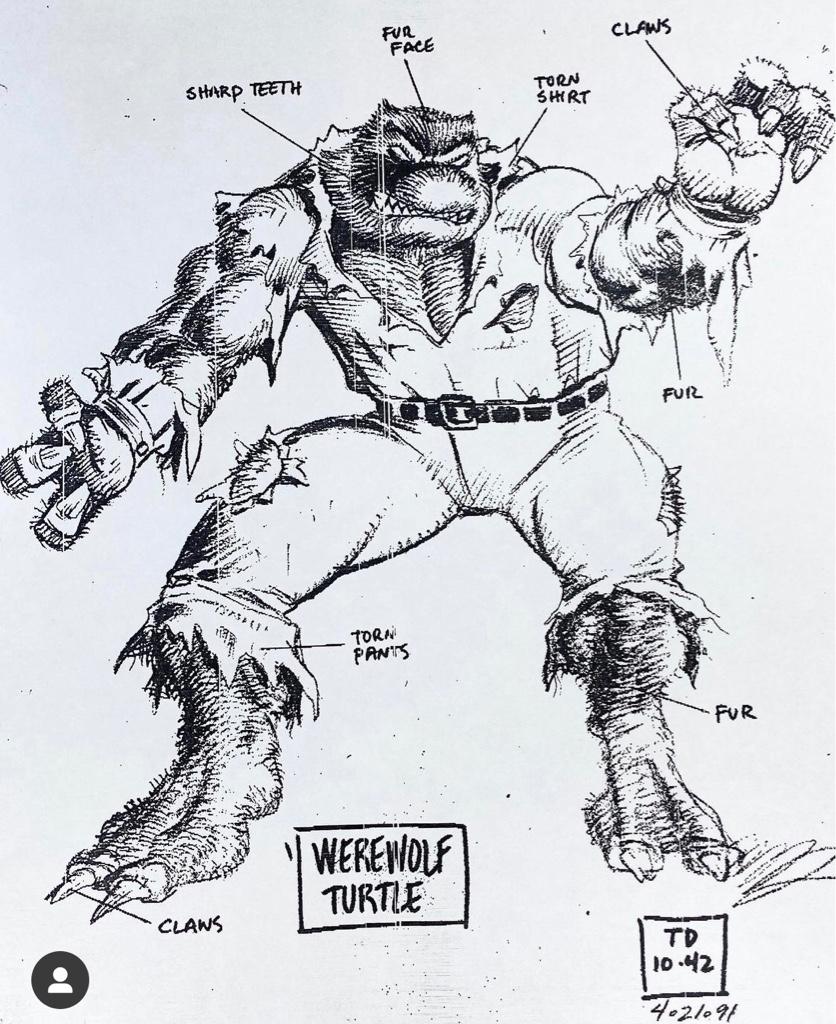 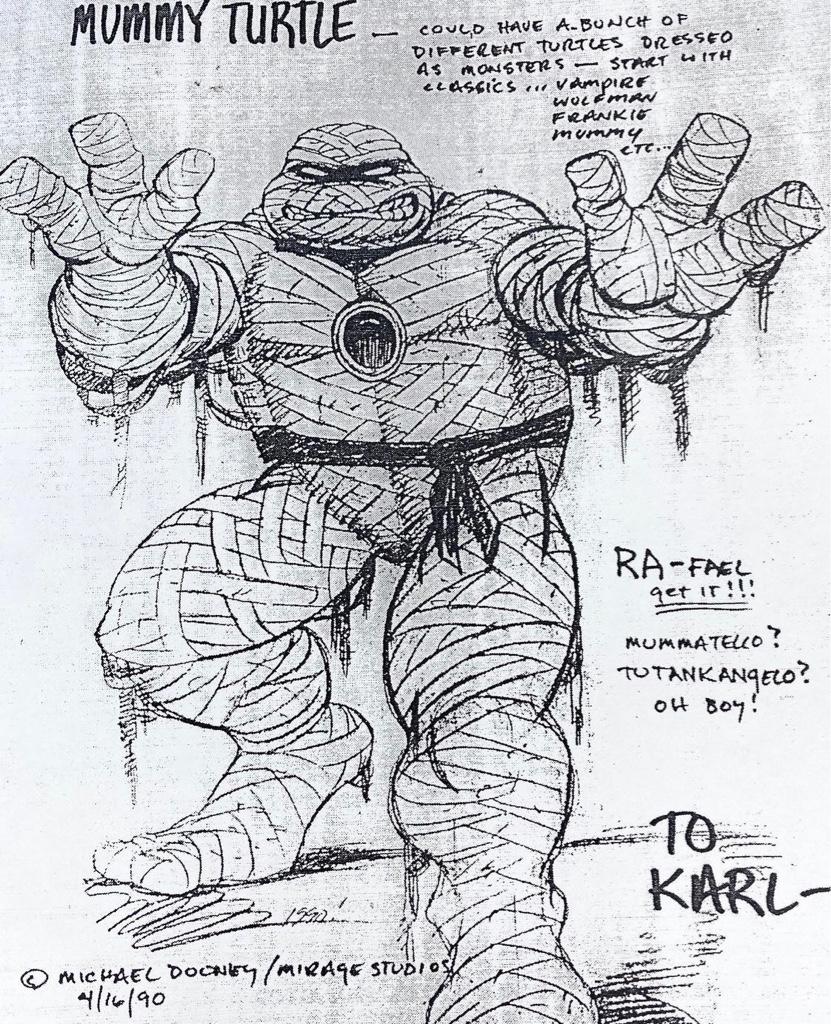 Speaking of playmates, in typical playmates fashion really missed out on re-releasing the vintage ones this Halloween. Maybe next year if they start releasing things that are not the 4 regular turtles. I’d probably buy them all. I think I only got Leo when I was a kid. I’m going to go dig him out for Halloween.
Top

If they're going to make a werewolf out of a turtle then they should at least make werewolf-colored hair. The green doesn't look like hair to me, it looks more like a swamp creature. Likewise, the idea of having a large angry-looking rabid rat (think the wolf creature from Batman the Animated Series) is significantly different from the type of rat that Vern was turned into. With the right sculpt, and I think Neca is perfectly capable given what we've seen with the originality in Frankenraph, Were-Splinter could work quite easily. It may not tickle your nostalgia, but we've seen that they aren't locked into doing exact remakes of what came before. They could just as easily make Casey, Shredder or April the Werewolf.
Top

It’s not nostalgia. It’s liking TMNT and werewolves. That’s why it was my favorite as a kid. And we already know Neca isn’t basing the designs on the originals so if they did a werewolf turtle it would look pretty different. The vintage are simple, smaller, kids toys. Neca’s detail would be incredible. Hair color makes a strong case for Donnie as a werewolf. His skin is often colored darker and more towards brown than the others.
Top

I'd rather not turn this into a debate over what you feel "nostalgia" means, but most of what you posted fits the actual definition of the word. At this point anyone could be the werewolf and we can all cross our fingers for who we hope it is or isn't. Only time will tell. That aside, if anyone has a personal display that they've put up just for Halloween I'm open to seeing them, as the other Universal TMNT Monsters reveals will likely be a while.
Top
Post Reply
120 posts