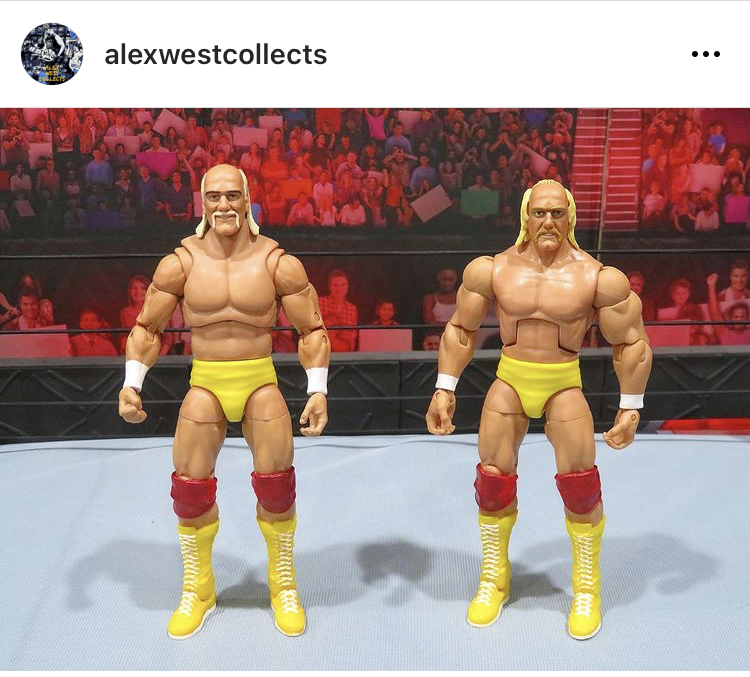 I wish I hadn’t used the HOF Hogan bandana I had on a failed attempt at a nWo bandana. I have a molded basic Hogan bandana head somewhere. I wonder if it’s the same mold?
Top

Got an email that UE Rock was back up and sold out again when I clicked on the link. Guess my hubris got me on that one. Cancelled my PO to grab it later when money was running lean a few months back. Oh well. Hogan won't get cancelled though. Want them all!

That's a bummer. Ultimate Rock is my pick for best WWE figure of 2020. Mattel nailed every aspect of it.
Top

I saw that. I’d have to think either WM9 or Nitro will win, so I’ll hold off on any fix ups.

There’s already another rumored Ultimate Hogan coming before then too. I’d have to think that would be a 2000’s era version.
Top

Got an email that UE Rock was back up and sold out again when I clicked on the link. Guess my hubris got me on that one. Cancelled my PO to grab it later when money was running lean a few months back. Oh well. Hogan won't get cancelled though. Want them all!

I guess they chose those Hogans given there's only a few years difference between them so they just deco change and re-use the NWO mold?

None of them are my ideal Hogan, which would be late 80s, but I've got a second hand DM Hogan on the way, so that'll do me until they eventually upgrade him in UE.

UE Rock is perfection. Provided you don't get wonky face apps (which are a serious problem for Mattel here and there).

I'm excited for UE Stone Cold... really hanging out for that one.
Top

Pics of E84 and a new legends wave are out.

If Roman has his full back tattoo then he’s a 100% but from me. Looks near perfect, minus that they can’t get peg colors right for hands if one’s taped and one isn’t.

I didn’t know they still had Vader’s rights. He looks great. I have the very first one they did, but the swappable hands and the detailed mask might be enough to get me to grab this one too.
Top

The thing about the pegs is Mattel says the hands and pegs are all in the same tool, so they have to be cast in the same color of plastic. I know it would cost money but it seems like for at least Reigns they could make a new tool that has two right hands and a separate tool with two left hands. Well, you know, if they didn't just paint the pegs to match (which they only do sometimes).
Top

I voted for Nitro debut HH. I definitely want his Undisputed run and a new late 80s also. The thing is I just wish Mattel could get his skin color right. I want it that right shade of hotdog!

Can't believe I excited for a Roman Reigns! I just fixed up my current Top Picks Elite with the Top Picks Basic with full beard for a more current look too. Definitely glad this one is coming.
Top

Nitro Debut Hogan is the least terrible option in the poll. Whichever option wins, I hope Mattel uses the Rock or Austin torso on him since he was a considerably leaner in the timeframe each option represents. I'd wouldn't say no to an Ultimate of 88-91 Hogan, especially if he came with a Hulk Rules shirt. Basically, just recreate his first Hasbro with an alternate bandana head and I'm happy.
Top

The exact look for Hogan I'd love to see. I hated the Hasbro line when it came out but did have that Hogan as well as the first Ultimate Warrior (I know it was a promo only look but I'd love an Elite of that too. I do have the Basic).
Top

Finally managed to order the SDCC Mr. T for a non-horrible price at Popcultcha here in Australia. Made even better by having heaps of rewards points with them due to buying Snake Mountain, so slammed down a $50 off credit on that sunnava

Wish the gear on the Flair in the Flair/Giant 2 pack was saved for an Elite. The green/yellow is the iconic Nitro-era Flair look to me.
Top

I just ordered the Ultimate Edition Fiend on Amazon
Top

They always do iconic gear on the basic BS it seems. It's super annoying.
Top

I swear the Royal Rumble set is harder to find than Cobra Island. Last year I saw Lashley, Rock, and Lita one time. I haven't seen any this year and app notifications aren't helping. I picked up immediately on the last three notifications, but couldn't add anything to the cart.
Top
Post Reply
5429 posts