Looking for a dose of entertainment? For movies, TV, and music - the Multiplex is your spot.
Post Reply
309 posts

And that he’s the variant Loki’s being recruited to hunt.
Top

Magnuz wrote: ↑
Mon Jun 14, 2021 10:51 am
I've already seen posts pointing out that one of the time keepers looks like
Spoiler! :
Kang
And this show could introduce him. God knows the devil window will make people start predicting mephisto again like wandavision but if that show taught you anything it's don't assume everything is cut and dry black and white clear as it seems from what you think after one episode.

Eh, that's because of the wood paneling being artsy with the mis-leveling looking like the mask lines, imho: 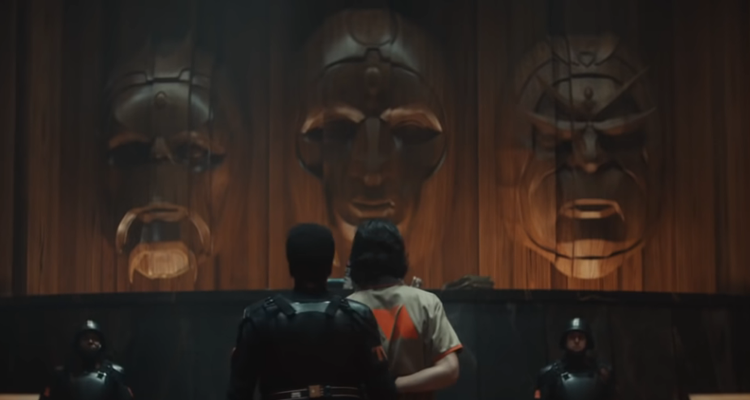 Actually the post i saw suggesting it was referencing the TVA info showcase with the animated time keepers showing the middle one who was blue, though if you look at the picture, that one is a woman. Either way i'm sure they are connected to kang and he may or may not be introduced. Seems like a good idea to set him up or develop him here before using him in the next ant man because he needs some explanation for casual audiences.
Top

If you've read Avengers Forever you'd definitely know Kang is tied in with the Keepers and absolutely is *not* one of them. While the MCU may always go other directions this one sounds like a blind alley that serves nothing except fans' geekery.
Top

There's a lot to love in this episode. It ramped things up quicker than I expected.

Spoiler! :
The fact that they took a moment to address what seems to be the biggest (and imo poorest) issue some seem to have with what this series has stated, that the Time Keepers dictate everything that happens thus everything is predetermined from beginning to end, by literally questioning whether or not that should be a good thing or not was great. It just lends credence to the fact that the end of Loki will lead to the creation of the multiverse in-full. On top of the whole debate about whether chaos is needed for balance or not.

I also really like the logic behind Lady Loki's hiding places being predetermined doomsday events. It makes sense: If an event is meant to happen that will lead to total destruction, then nothing anyone says or does at the scene beforehand will matter because the event is essentially wiping the slate clean to begin with thus there's no variance occurring. I don't think I've heard of that concept before.
Top

Does anyone else think
Spoiler! :
Lady Loki is actually Enchantress? I mean, she's blonde and kept enchanting people.
Top

Sophia Di Martino is only credited as "The Variant" in the credits.

EDIT: Also, she became irritated and said not to call her "Loki"
Top

This episode really telegrpahed that if the Time Keepers exist at all, they're not what has been claimed. I'm certain that some element of the TVA will be the ultimate villain of the series, with Other Loki being sympathetic, if not outright good by the end. Marvel (and Disney) love the trusted authority figure/mentor having a heel turn (Obadiah Stane, Alexander Pierce, Ego, Yon-Rogg, Mysterio) and having the surface-level antagonist be something of a scapegoat (The Mandarin, Skrulls, probably the Deviants). It's the same thing that makes me think Ikaris is going to end up as the ultimate villain of the Eternals movie. I don't think Kang will be involved, although there may be some connection with him and the fallout of the Loki series when he shows up in Ant-Man 3.
Top

Maybe. I don’t care who the variant Loki ends up being…good theory by the way. I really like the adversary! Who is an Asgardian that is for sure.

Sophia Di Martino is only credited as "The Variant" in the credits.

EDIT: Also, she became irritated and said not to call her "Loki"

Yeah, this makes the most sense to me. Since
Spoiler! :
LL is constantly taking over others' bodies, she could have easily taken over Loki at some point when the TVA caught on to her, and also the fact they point out how her powers are always different. Not to mention, fans have been clamoring for her since Dark World and she's not in L and T.
Top

Hiddleston has also hinted at or petitioned for
Spoiler! :
a love interest
for Loki for some time. He said something to the effect that would be one sided.

How about Renslayer's secret analyst? Could it possibly be:

That would be cool!
Top

Spoiler! :
I would say 99% unless they do something to throw everyone. The hair color and power set makes sense.

Even though the actress is listed as “The Variant”, there was casting for the role of “young Sylvie”. Sylvie was the name of the second enchantress from Oklahoma that Loki gave power to. TVA could either be mistaken about who they are chasing because of the magic, or they were chasing a Loki but that Loki made enchantress and now she has her own agenda. She wasn’t interested in our Loki’s plan so she probably wasn’t interested in any other Loki’s plan.

Question: does a variant of a person have to have the same name? If gender, hair color, and frickin' species can change (as only seen in the comics, at least so far) why not name as well?