Looking for a dose of entertainment? For movies, TV, and music - the Multiplex is your spot.
Post Reply
216 posts

When Starlord gave Thanos the middle finger, Thanos was super confused, because in 139 separate intergalactic civilizations the middle finger meant "I want to [email protected]#$ you like an animal." Thanos wasn't sure if he should have been flattered or not.
Top

I was right a long while back.

Miss Marvel is getting Green Lantern hard light construct powers in purple, instead of the body stretching powers. 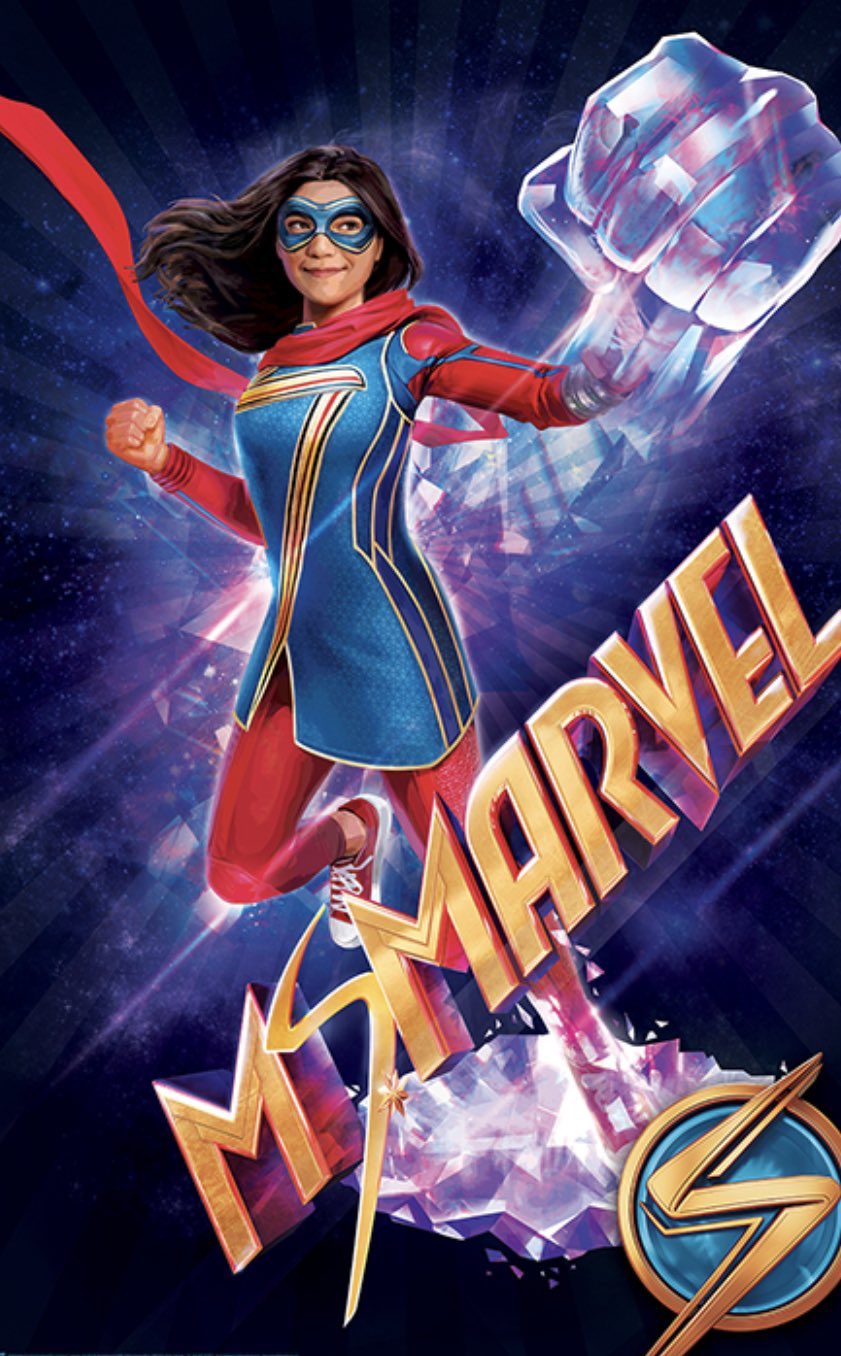 Miss Marvel is getting Green Lantern hard light construct powers in purple, instead of the body stretching powers.

Why and how did you foresee that?
Top

Someone leaked it on spoiler sites a while ago.
Top

Marvel's historic 25 film streak of being Critic-proof may finally come to an end tomorrow or so, as Eternals heads closer towards being Critically Rotten. Now at 63% and falling.

I'm intrigued to see how that may inform future decisions at Marvel and if it will have an impact on the box office legs.
Top

Given Eternals is probably their least known property to get a movie (Ant-Man and Shang-Chi are close but ultimately more well known even to comic fans), poor reviews certainly won't help the box office. And given the negative reviews suggest it is more dull/mediocre than bad that doesn't bode well either, as bad but crazy can still do well (I am looking at you Fast and Furious series) and have supporters.
Top

I've been thinking it for a while....but didn't want to really say it because I'm never a fan of pre-emtively judging a movie....but I think this movie is going to bomb hard for a Marvel movie.

Seeing the reviews just further cements my prediction. This movie is heading into JL territory of box office flopping.

I personally never found the trailers interesting at all. The visuals that wowed everyone else fell flat for me. The thing that I've noticed though....is no one I know is talking about this movie at all. They are talking about Spider-man 3 or other movies. Those same people weren't sure what to make of Shang-Chi as it was an unknow property to them...but some good word of mouth sent them to the theater. It's an imperfect sampling but out of all my friends I'm the only comic book guy, they are all more general movie going audiences. So they only take chances on unknown stuff if it either looks cool in the trailer or good word of mouth tips the scales.

The trailers haven't intrigued any of them. And if the reviews are any indicator, word of mouth is going to be mixed.

Add in the fact that they all now know they can just wait for it to pop up on Disney + and there's not a lot of incentive.

If this movie flops...it might be time to start talking about the GoT curse. Any movie starring a main character from GoT...is going to flop.

I'm also curious what they will do if this movie does in fact flop. These are extremely powerful characters that will change the dynamic of the MCU....you can't just ignore them or that this movie happens. Once again, this movie might open the same can of worms that JL did for DC. How to proceed and ignore one of the movies?
Top

This movie has Two Significant problems:

1) It's 'heroes' have been around for 7000 years, and just sat back and watched as horrible atrocities happened. There's a specific scene in the film which I can't reveal that really shows how badly this paints the protagonists.

As a result, audiences will have trouble caring about these 'heroes', empathizing with them, or finding them respectable. Similar thing happened with Zack Snyder's Man of Murder amidst the 9/11-levels of destruction and mass death in Man of Steel.


2) It's inevitably going to offend some regarding Religion, as Alien Celestials are the creators of sentient life in the MCU universe, including mankind.

Some said this could be an issue when Eternals was announced, we'll see how it plays out in the film.


This film also needs strong domestic box office, because it's Banned from China. Losing a significant market there.


I'm also curious what they will do if this movie does in fact flop. These are extremely powerful characters that will change the dynamic of the MCU....you can't just ignore them or that this movie happens. Once again, this movie might open the same can of worms that JL did for DC. How to proceed and ignore one of the movies?

I'd say avoid a sequel if it underperforms, and simply reintroduce some of the surviving characters in Guardians 4 and Thor 5 down the line.

At the very least, the Celestials are going to be around for the long haul. There's good stuff to mine out of Eternals, even if it doesn't warrant it's own solo franchise.
Top

Eternals is definitely not going to be for everyone and yeah, probably the biggest test of the "Marvel" brand yet. Really see how many people will come out, in this day and age, just because of that logo.

I've read every spoiler I could along the way, am one who was amazed at the beauty and heart hinted at in the trailers, and am excited to see the film. Having something of a break from the main continuity ought to be interesting and maybe even a breath of fresh air before diving back into mainstream super heroics (which I welcome, super excited for Hawkeye and Spider-Man as well as EVERYthing coming next year).

But like I said, this won't be for everyone and I wouldn't expect it to be. I'm very into the world building and the emotions behind it though. I hope it does well, but I'm seeing it either way.
Top

I’m waiting for it to pop up on Disney + personally. I still haven’t watched Black Widow yet though. So even when it does pop up on there I’m not sure when I’ll watch it.

There’s only so much time I have to watch movies and the Eternals is competing for my time with other things I’m more interested in. There’s just not enough of a draw for me.
Top

Ah, I'm one of those who is still stuck on the MCU stuff being priority as far as what I watch though I haven't seen Shang Chi yet. Eternals I'll venture into the theater for though. Like I said, I totally see it isn't for everyone but what I know and have seen speaks to me.
Top

This is the first I'm hearing of such a thing. Which movies with GOT actors are flopping? I know Jason Momoa (Aquaman) was in one season of the show and the first Weedon JL under preformed (the Snyder Cut did a lot better), I don't know if that equals "curse".

I'm just luke-warm to a lot of these movies and satellite Disney+ projects that have either come out or are on the horizon. I guess to me phases 1-3 of the MCU were so wonderfully handled and came together in such a complete and satisfying way, I'm not really looking for more. That could have been the end for me and I would have been fine (much like if Star Wars would have just ended after 3 movies, but I understand there's money to be made...).

I saw Black Widow and was just like, "Eh, that's nice". I have yet to see Shang-Chi, at this point I may as well wait to watch it at home. Eternals has just never sparked any interest with me. I just don't know them.

I wonder if it's a mistake to slow walk Fantastic Four and X-Men. It seems like if they're going to keep on going, there is a very, very big void to fill with Cap and Iron Man gone and doing it with just anyone they have around who has yet to get their own movie won't be as exciting.
Top

K_Steel wrote: ↑
Fri Oct 29, 2021 12:46 am
At the very least, the Celestials are going to be around for the long haul. There's good stuff to mine out of Eternals, even if it doesn't warrant it's own solo franchise.

I've never gotten the vibe that Feige is trying for an Eternals trilogy; and had always planned a one-and-done movie to set up the Celestials. In nearly 50years of their existence in the comics the Eternals have never done dick-all of interest except introduce the Celestials. Angelina Jolie and Salma Hayek are only here for the quick paycheck. Neither of them are planning for another decade of the Eternals, imho.
Top

I think that’s part of the challenge for Phase 4 so far. Saying this having not seen any of the movies yet (

Black Widow is a period for ScarJo, setting up Yelena for the future.
I wouldn’t think of Shang-Chin carrying his own trilogy, so my expectation has been “where does he end up next” (reallocated villains is going to be part of that)
Eternals is in the same boat. Is it just to set up X-Men and maybe bring Sersei/Black Knight to Avengers?

Covid definitely jumbled things, but it being two years before we get something that feels familiar and builds on the character in NWH and MoM is a long wait. I feel like these three movies in this sequence is the gamble. Maybe MoM swapped with Eternals would have felt less risky.
Top

This is the first I'm hearing of such a thing. Which movies with GOT actors are flopping? I know Jason Momoa (Aquaman) was in one season of the show and the first Weedon JL under preformed (the Snyder Cut did a lot better), I don't know if that equals "curse".

Curse is obviously tongue in cheek as I don't believe in that kind of thing. The curse of the Bambino made for a interesting story but let's be real here.

It's just feeling like a trend that you could almost start saying "curse" in the same way.

Emelia Clarke: Terminator Genisys (flop) Solo: A Star Wars Story (flop) are the big ones...but nothing she's done has matched expectations financially and critically they have all been poor to mediocre.

Maisie Williams: The New Mutants is her most high profile project....and it flopped

It's obviously not their fault that these movies flopped but it's a funny coincidence that their most high profile outings...in established franchises...flopped.

Now you have Richard Madden AND Kit Harington in a Marvel movie that's about to flop and is currently rated lower than any other MCU movie.

It's also not a hard fast rule as Peter Dinklage for example has done well, but to be fair he was doing well before Game of Thrones.

Jason Momoa wasn't a main character. Not in the role he was in. Supporting at best imo so I feel like he'd be exempt.