IT'S CLOBBERING TIME! Here is the unofficial Marvel toy board. C'mon in and talk ML, MU, Select, and all of the other Marvel toy lines.
Post Reply
415 posts

Hopefully they'll finally reveal the Hawkeye and skycycle tease that's been popping up in several of Ryan's livesteam displays over the past year.
Also, they'll have to hold a few things back to reveal at NYCC the following week.
Top

Maybe Hasbro will reveal this? 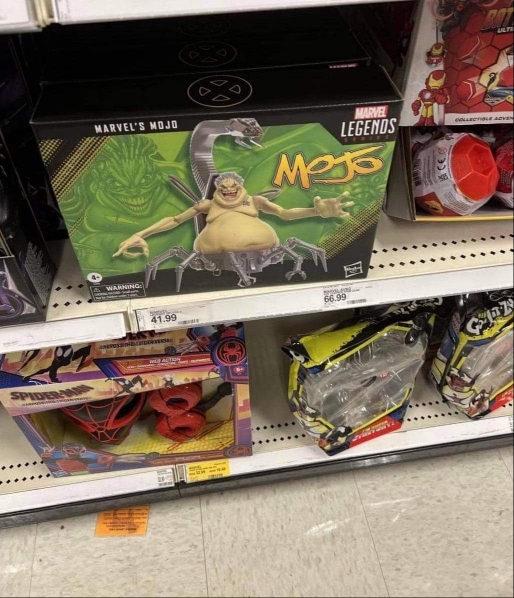 That... makes no sense for a variety of reasons.

I'm inclined to believe it is fake for now. If someone saw something like that it would be purchased and directed for clout and likes and attention.
Top

Enforcer wrote:That... makes no sense for a variety of reasons.

I'm inclined to believe it is fake for now. If someone saw something like that it would be purchased and directed for clout and likes and attention.

I thought the initial Mojo rumor was a retail figure like MODOK, though. Like someone had a SKU for it at the beginning of this year.

They also kind of released two MODOKs last year: the classic retail one and the Elvis HasCon exclusive. So there’s precedent.

You forgot: No X-Factor Wolfsbane
No Random
No Namorita
No Marrina
No Ultraverse
Top

Do we know if Shuma Gorath is actually happening?

I'd say if he is and the price is outrageous that'd be what people will be complaining about. I personally would be satisfied with 10" - 12" Shuma Gorath at $60.
Top

X-Men Retro card offerings, with repacks of the Cyclops and Dark Phoenix figures, retro-card reissue of Madrox, as well as a proper Syrin with screaming head.

If even half of this turns out true I'm coming over there and kissing you on the mouth.
Top

I hope more revisits of ToyBiz classics. Anything Claremont X-Men will be a instant buy from me.
Top

Mess of spoilers in this, so beware. Leaked 2023 list from rektangular

Well, that's some crazy shit if true. This should probably have its own dedicated, spoilers-allowed thread. Maybe even two; one for comic figures, one for MCU.

Sent from my Pixel 6a using Tapatalk

I don't watch videos- how about an article that I can read in a twentieth of the time it takes to watch a video?
Top

I’ll give a dollar to whoever is willing to type all that out.

Lots of good stuff in there. I’m glad the Avengers anniversary didn’t overshadow the X-Men - who seem to have gotten almost completely shafted. Though I suspect the Corsair fans will be happy! (As someone who had no idea who that was, yet seeing his name pop up on wishlists often, it was a long standing running joke to me. Glad to see it reach its conclusion.)
Top