IT'S CLOBBERING TIME! Here is the unofficial Marvel toy board. C'mon in and talk ML, MU, Select, and all of the other Marvel toy lines.
Post Reply
1951 posts

Just got Darwin today and I'm surprised how much I like him.

I know nothing of the character, so my head cannon is that he's one of the Morlocks that came to live at the X-Mansion. So I'm sticking him near Callisto.
Top 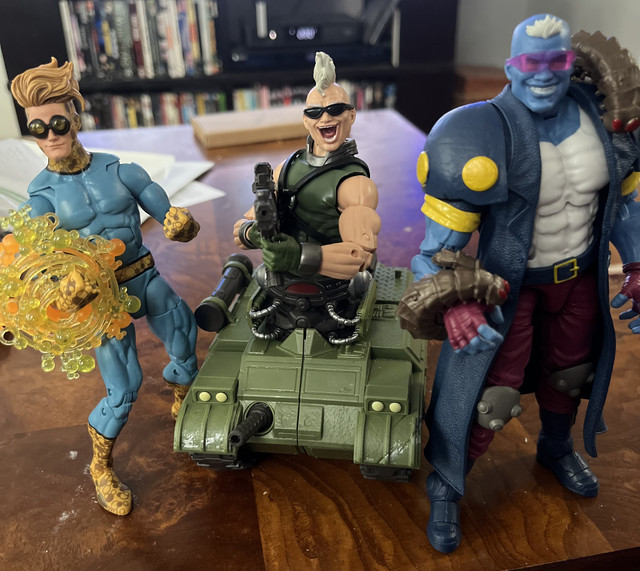 I'm glad someone put them on him and took a pic. If you have the cartoon VHS Jubilee how do her opaque shades look on him? Or even Profit Director Destro's shades if you have those? I figured the slimmer profile might resemble the comics more, but I didn't want to have to buy him just for those to paint. It's a pity they didn't just make the "with glasses" head like they did with Love Triangle Cyclops.

I don’t have any interest in the Animated figures and took a lot of restraint to pass on GIJoe Classified (as much as I wish I hadn’t!!).

Caliban wave Jubilee’s shades are fairly snug and fit well, though really Maggot’s entire sculpt; including the face, as others here have mentioned has no reason to be as good as it is; same thing I felt about Shatterstar.
Top

Caliban wave Jubilee’s shades are fairly snug and fit well, though really Maggot’s entire sculpt; including the face, as others here have mentioned has no reason to be as good as it is; same thing I felt about Shatterstar.

I'll agree that the figure could have been done much worse and been given a much skinnier build with a less original costume. I just wish he wasn't constantly smiling, another head would have sealed the deal for me along with fist hands. The Jubilee glasses looked snug from what I saw so I didn't want to warp mine in an effort to make him look more like the comics.

As for G.I. Joe, don't get me started, I never liked the show as a kid, so I know very little about it and never found anything all that intriguing besides the ninjas, which let's be honest, back then ninjas were the "everywhere" fad. The sheer level of detail on each of these Classified figures is great. The paint apps seem better than ML for whatever reason, they come with more accessories, and just when you think you're done, another cool looking figure you know nothing about comes out and you think to yourself "ok, I'll just get that one and then I'm done." If you get nothing else, at least get the new Storm Shadow coming out while you have the chance. I've yet to hear anyone not enjoy that one!

I just couldn't bring myself to get that Shatterstar, accurate as it might've been. I the red and white always popped off the page for me as a kid, so hopefully that one's coming.
Top

If anyone makes a custom Caliban with Darwin's head, I'd like to see it to get some ideas.
Top 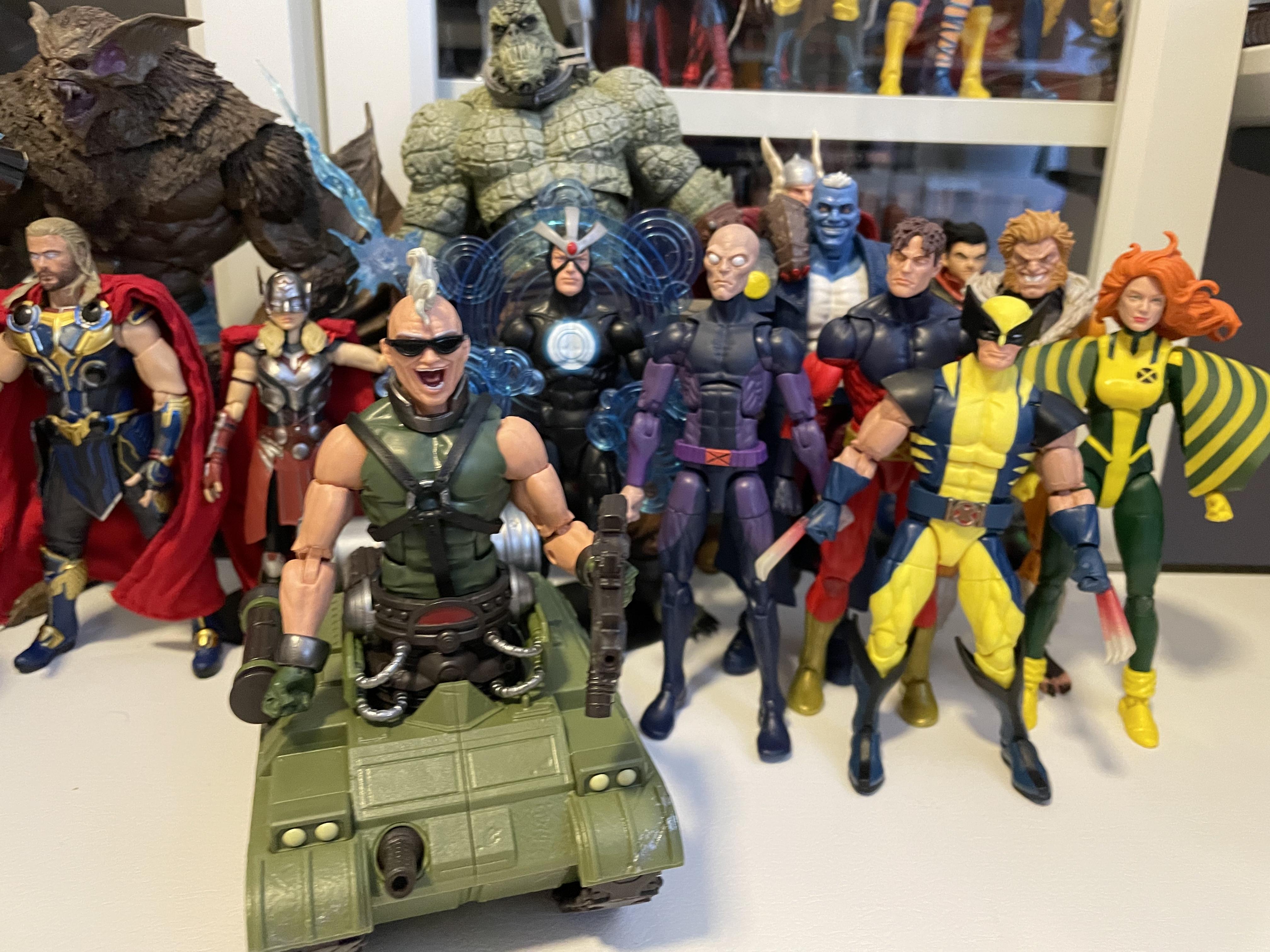 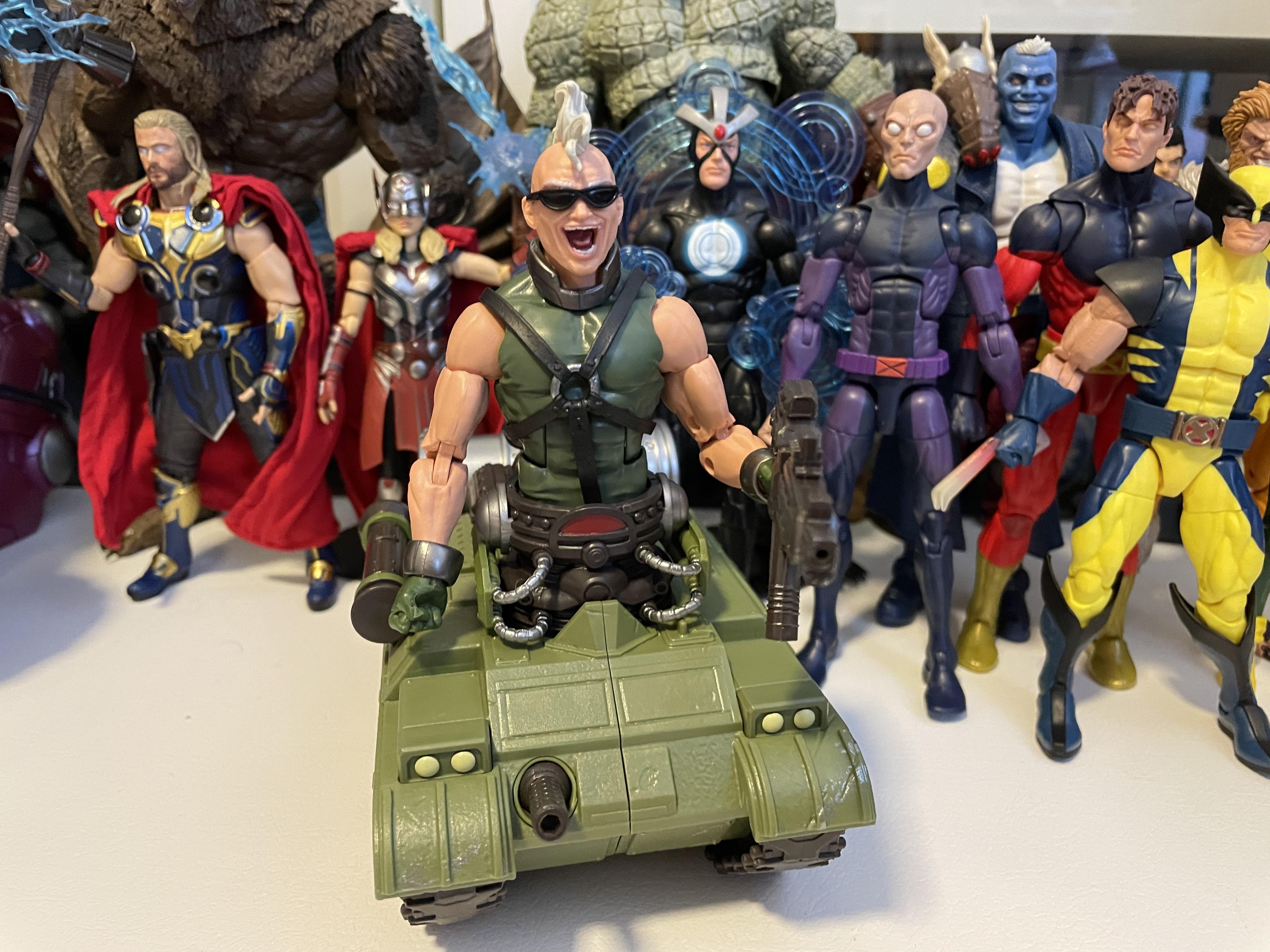 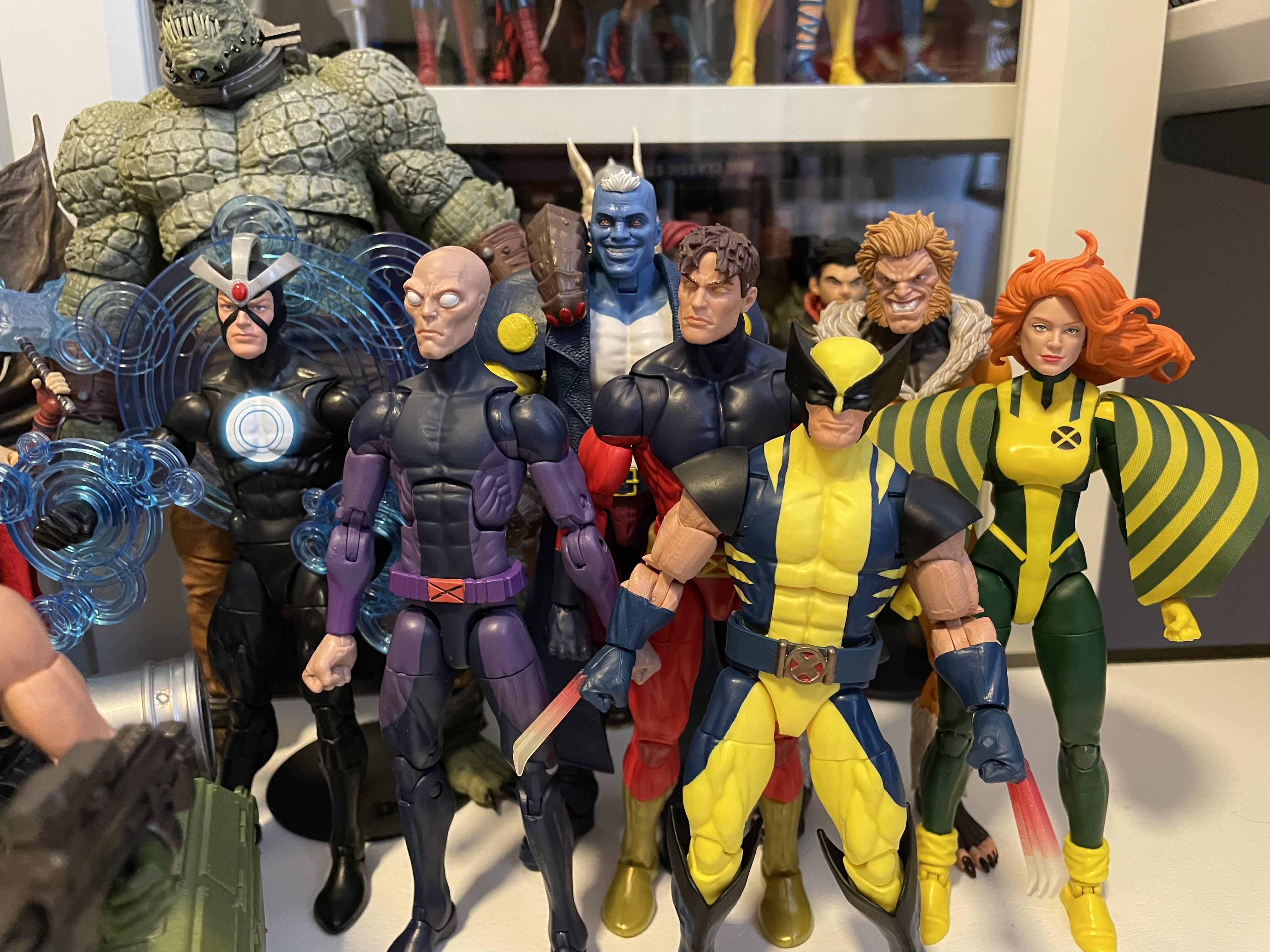 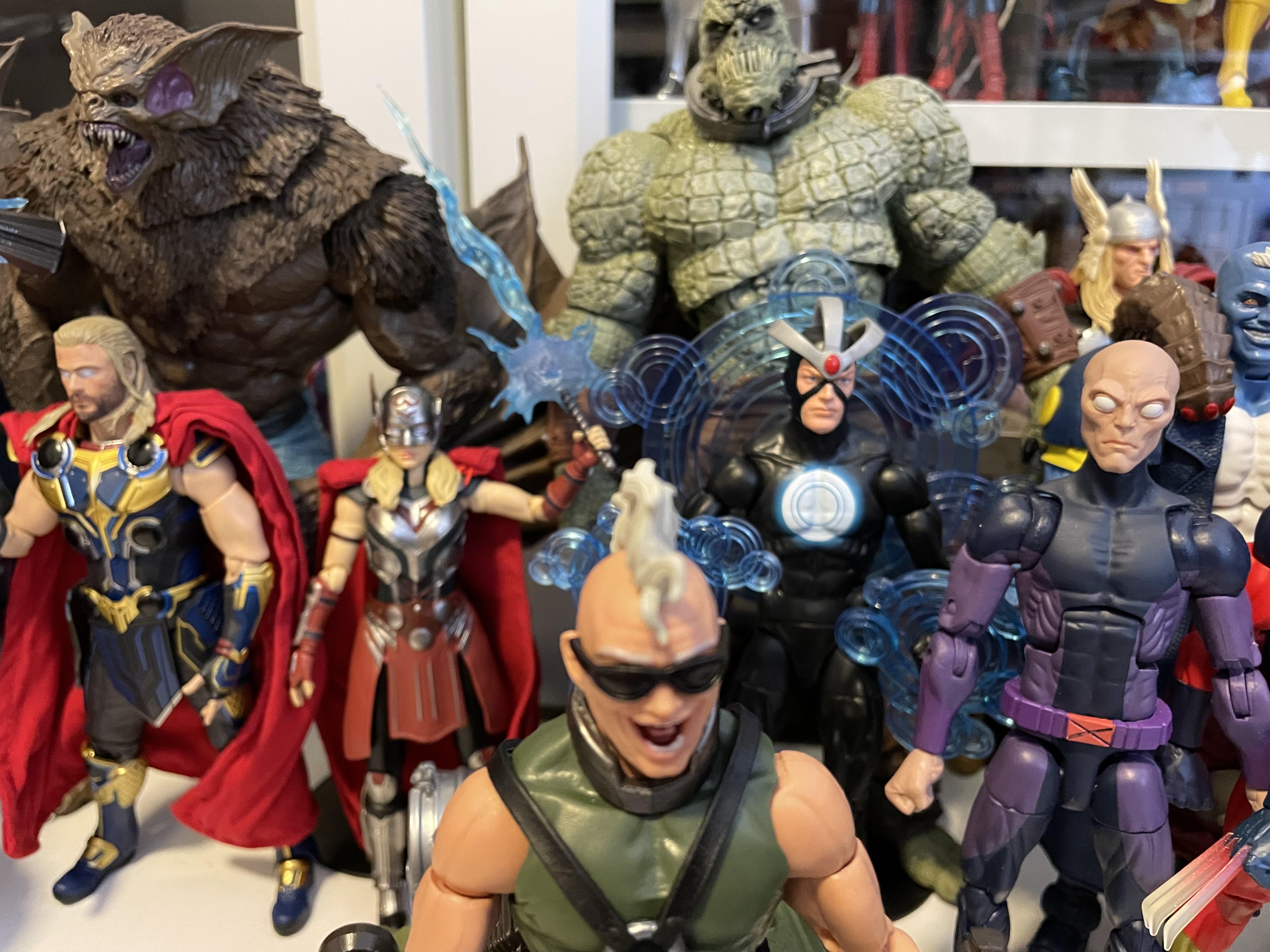 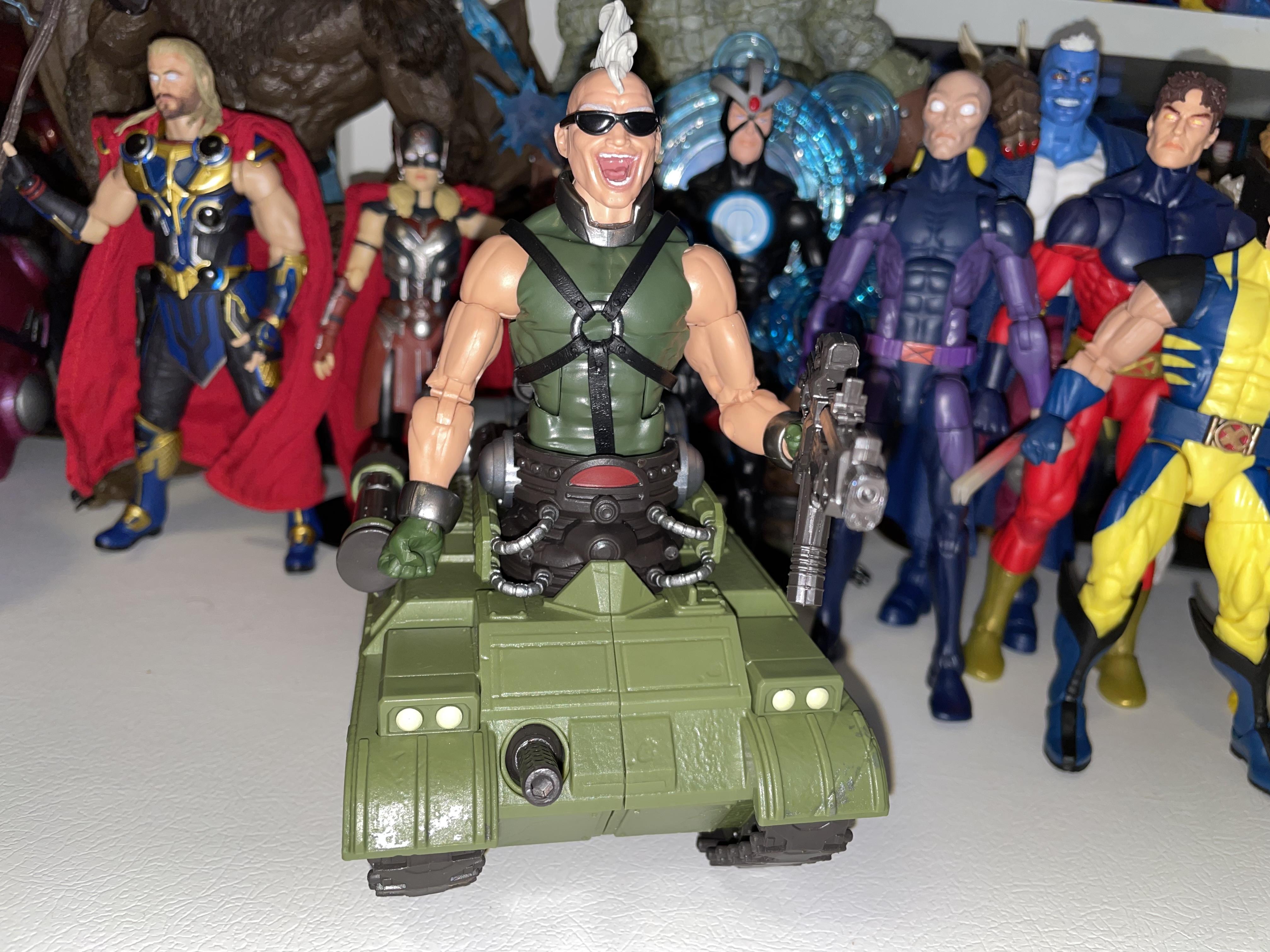 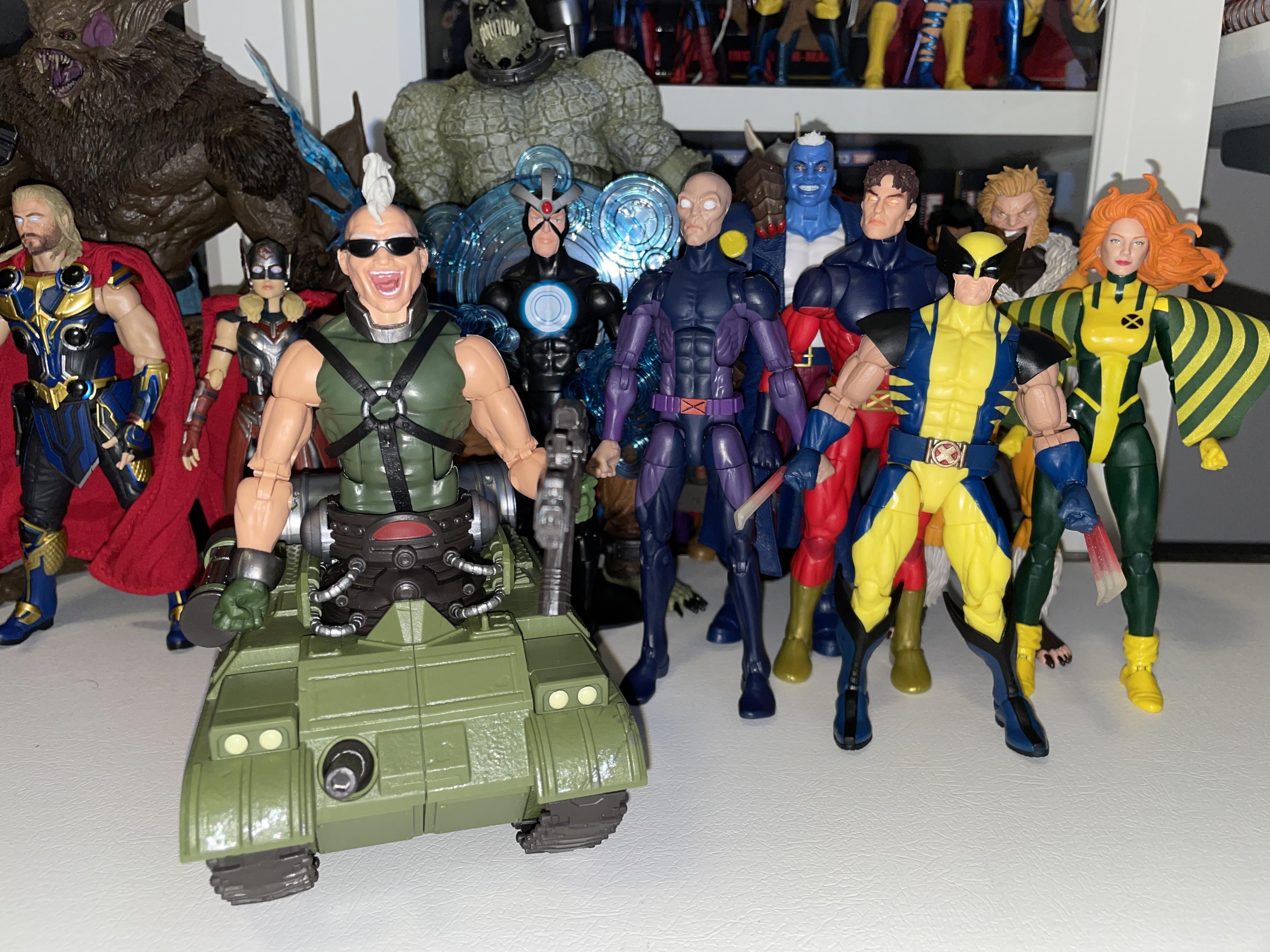 Started off the holiday weekend by opening up this wave! Strongest X-wave for me since the Apocalypse or Caliban waves (which I consider the high mark of ML in general).

Bonebreaker and Havok are the clear winners for me. Given his very unique body, I can’t believe they actually made Bonebreaker, let alone anchoring a BAF wave. In person, he looks like Flea from the Red Hot Chili Peppers even more than in pictures.

And Havok’s energy accessories are far and above the best Hasbro has made. Really makes the figure pop.

As for the rest of the wave, Siryn and Sabretooth are my next favorites. Really excited to continue finishing the early era of X-Force with her. And Sabretooth looks better in person than in the solicitation photos. I have the old Face Off one and kept it, but this fits in much better with modern Legends.

Maggott, Darwin, and Vulcan are fine figures — I’m just not a big fan of the eras they’re from really. Since there aren’t any other figures of the late ‘90s team Maggott was on, I’m not sure where to put him. For Darwin and Vulcan, I’ll put them with the blue/red Warpath. I would include the Rachel Grey Marvel Girl from Hasbro’s early tenure, but I lost her, so need to rebuy. (I don’t think Hasbro will remake that figure.)

The only disappointment for me is the Wolverine, which is primarily because it’s from a one-off story from the true X-Men dark ages where readership was at an all-time low and is *this close* to being the perfect Astonishing X-Men Wolverine. I really would’ve thought Hasbro would officially signal they’d dive into that era next, but not sure they will at all.

Still need Havok's piece, but I'm very happy to have him assembled at least! 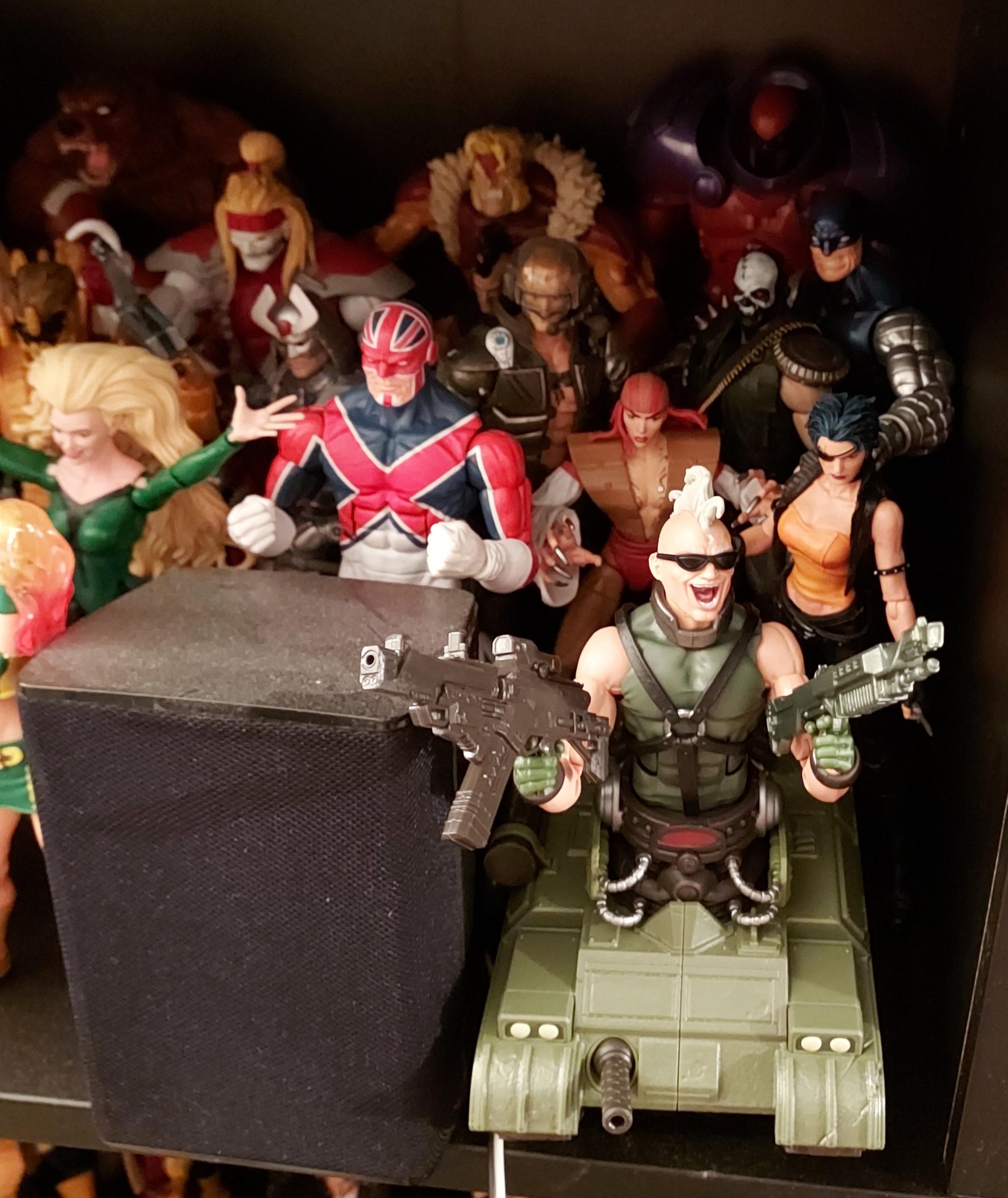 Anyone else put his spare hands in that little trunk in the back?
Top

That's a good idea for the hands. That little tank is just the best. So versatile. From the junk in the trunk to the machine gun wiener, Bonebreaker might be one of the best BAFs in years. Easily the best BAF so far this year.
Top

Not sure if this has been shared, but there are pegs on the tank part of Bonebreaker to put other figures. I put Skullbuster and Reese (extra head from Skullbuster on the G.I. Joe Classified Series Gung Go) on it. Haven’t perfected the positioning, but it looks great. 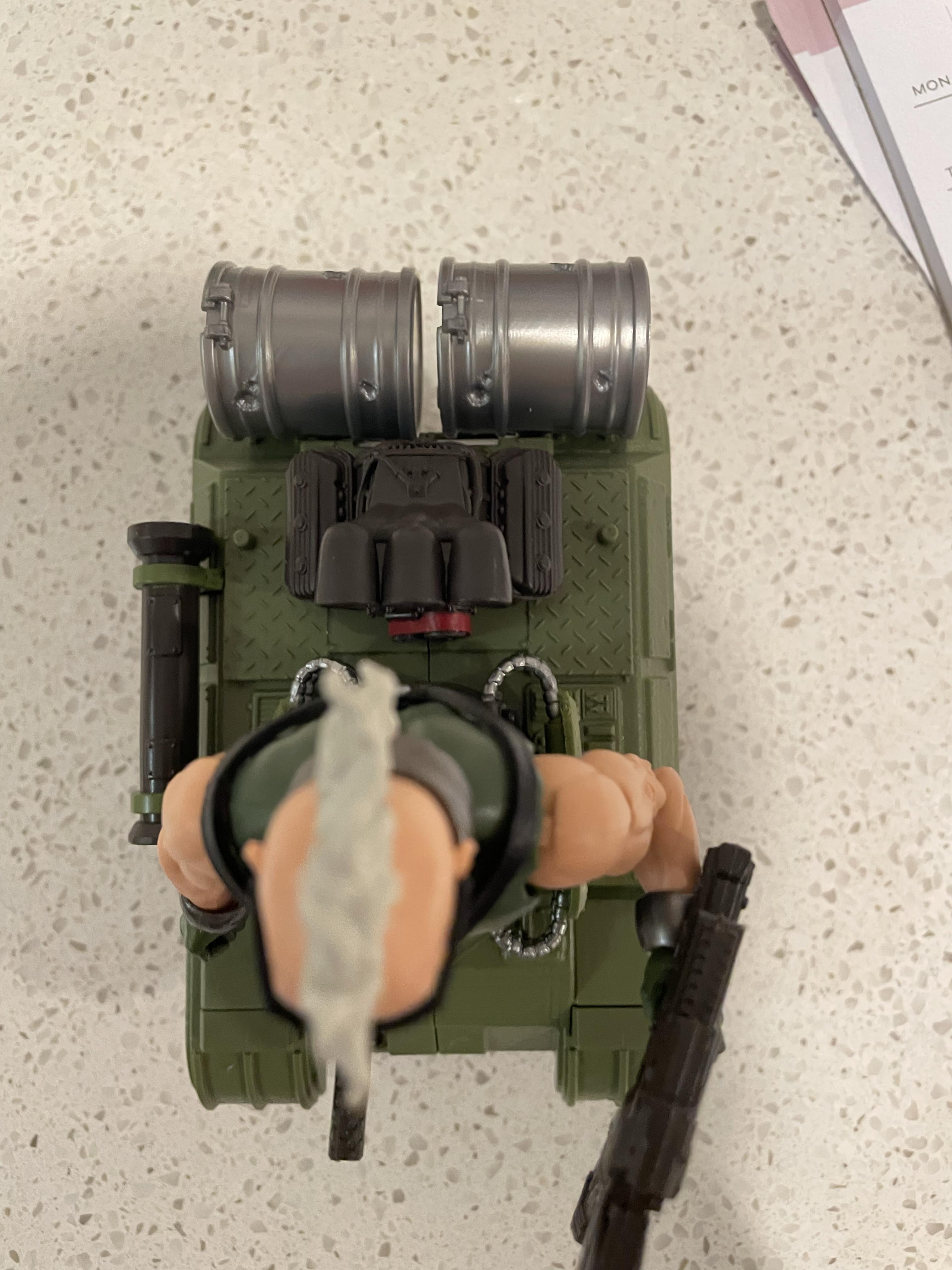 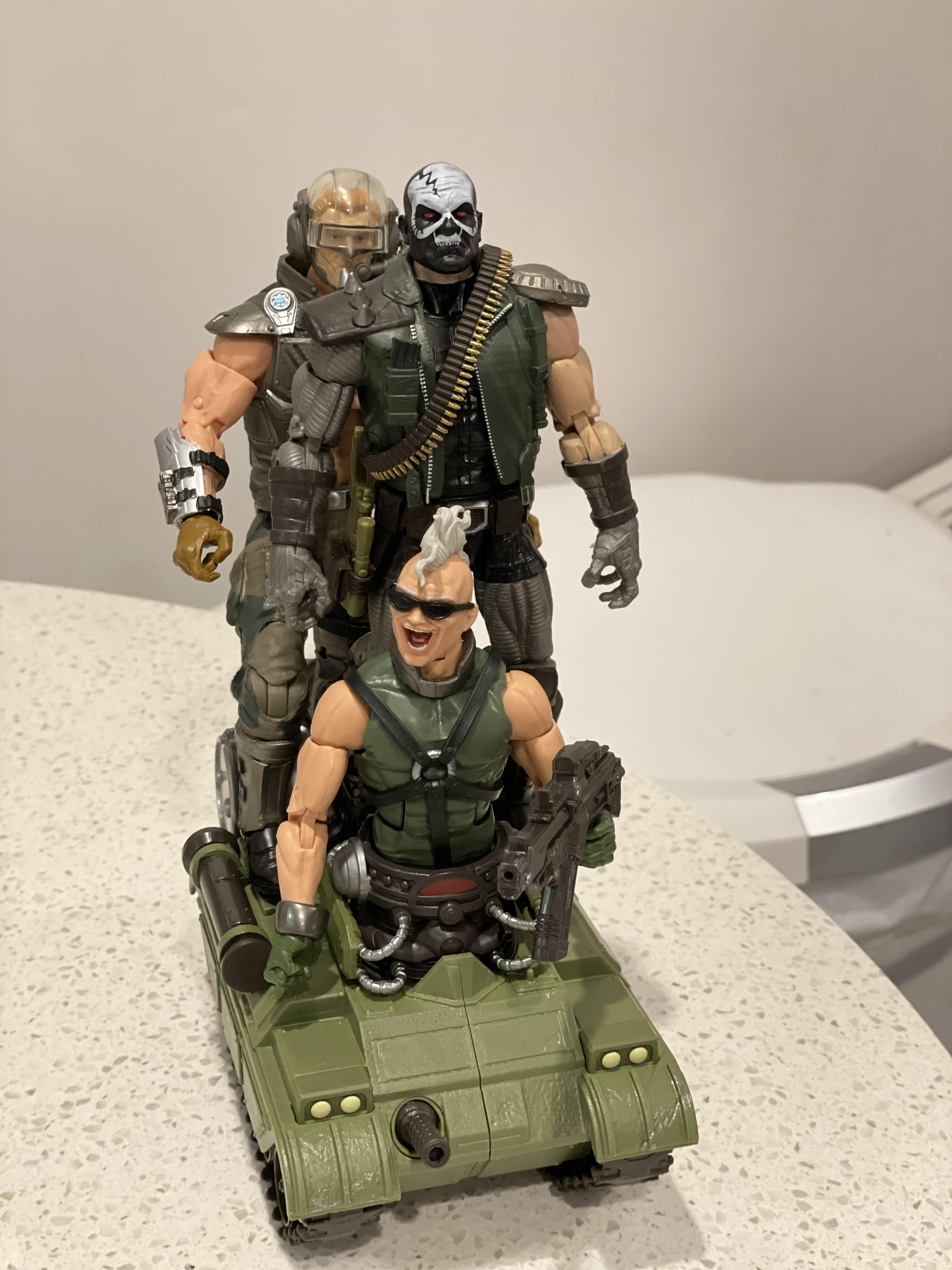 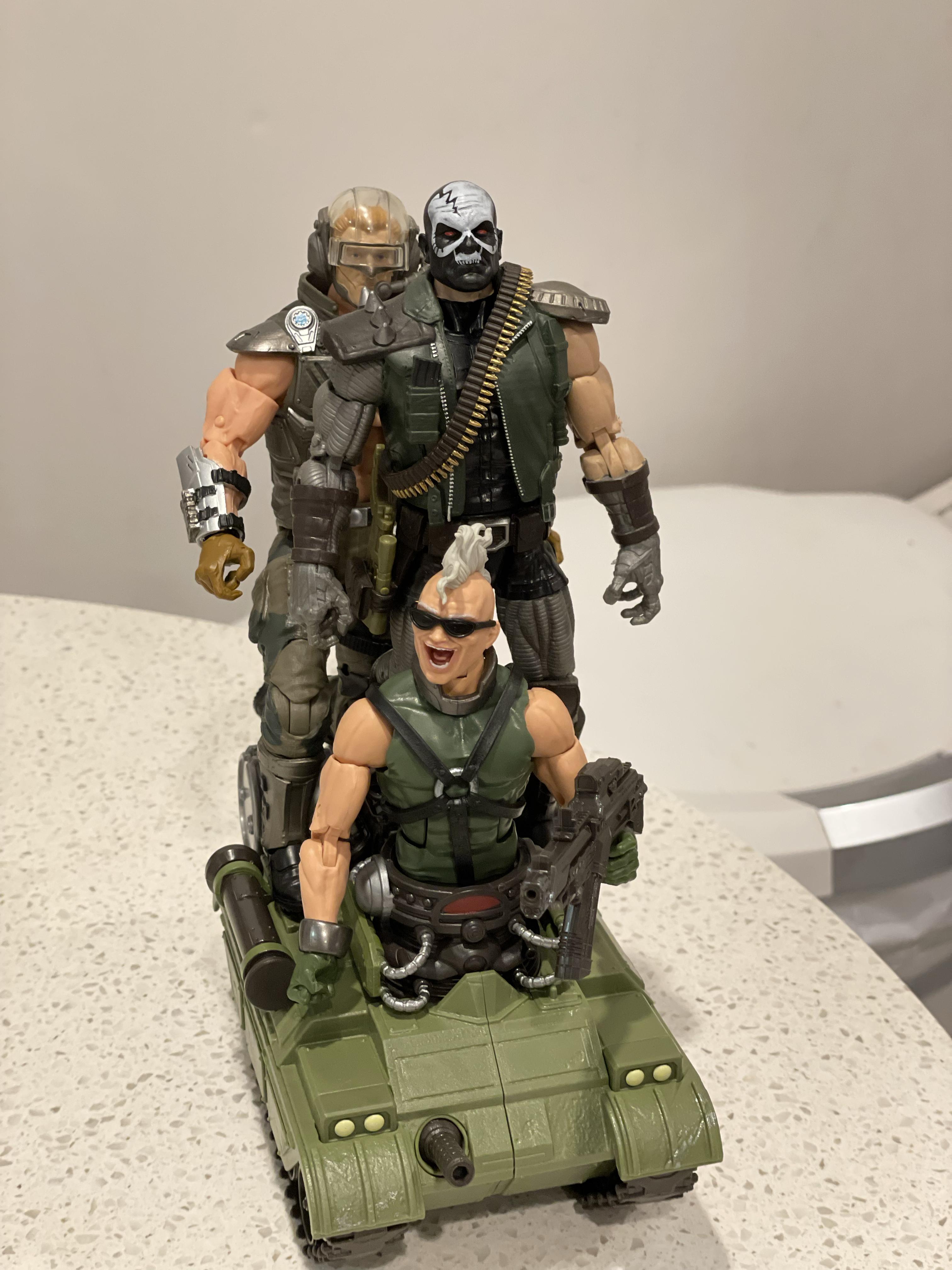 Wonder if we will get more Reavers like Pretty Boy or Cole or a Reavers Donald Pierce.

For sure. Dwight is a big fan and they're not going to do a BAF Bonebreaker then not do the others. I could see an 80's-centric X-Men wave or Haslab coming like a late 80s X-Tinction Agenda with Cameron Hodge then some unlocks like Reavers or Genoshan soldiers.
Top

Is the heat on Hotclaw Wolvie painted on or part of the plastic? I may just pop them out and acetone/magic eraser it off. Then it's only the pauldrons that are annoying.
Top

Amazon charged me for all my pre-orders that shipped and Havok who is still showing November availability. Hoping to get him soon. Probably my biggest want for the wave.
Top

JTMarsh wrote: ↑
Fri Jul 01, 2022 11:44 pm
Is the heat on Hotclaw Wolvie painted on or part of the plastic? I may just pop them out and acetone/magic eraser it off. Then it's only the pauldrons that are annoying.

The red is painted on, it seems, but the plastic is translucent, almost like fingernail color. They're not molded in silver or grey plastic. Acetone will just make them look like long fingernail colored claws.
Top

JTMarsh wrote: ↑
Fri Jul 01, 2022 11:44 pm
Is the heat on Hotclaw Wolvie painted on or part of the plastic? I may just pop them out and acetone/magic eraser it off. Then it's only the pauldrons that are annoying.

The red is painted on, it seems, but the plastic is translucent, almost like fingernail color. They're not molded in silver or grey plastic. Acetone will just make them look like long fingernail colored claws.

Thanks. Will likely pop them out, remove the "heat" paint, and paint them or use a chrome pen on them and see how they look. Gonna wait til this Wolvie hits sale first though.
Top

JTMarsh wrote: ↑
Sat Jul 02, 2022 4:43 am
Thanks. Will likely pop them out, remove the "heat" paint, and paint them or use a chrome pen on them and see how they look. Gonna wait til this Wolvie hits sale first though.

Just out of curiosity with all the better Wolverines out why go through the trouble with this one?
Top

X-Men is more or less my main property I collect, so while I am increasingly put off by some of the stuff Hasbro is doing, I'm not above waiting for stuff to go on sale to putz around with the stuff I wouldn't pay retail for. Overall what I described isn't all that difficult to do. Plus it's something you can do inside during the winter or whenever you're bored. I'll agree that there are better Wolverines out there, I have most of them; but the longer I collect this stuff the more I realize I'm going to have to tweak stuff I buy to get it the way I wished Hasbro would make it. Plus the more you learn about customizing the better you'll be at it and can make the stuff you DO have to tweak look all the better. So I view it as half tinkering and half building a skill with something I already enjoy.

I was already thinking about waiting for Maggott to go on sale, then using the hair from the pack in Bonebreaker head, sectioning down the mohawk and making a larger more wild looking "hair piece" tuft for a second version of Maggott. Not sure if his current hair is glued on or is physically in the head. I haven't seen his hair painted weird on any figures so I'm assuming it's a separate piece. Might be worthwhile to find a more stoic head as well, but I don't know any bald head sculpts in that size that might work and look decent.
Top
Post Reply
1951 posts