IT'S CLOBBERING TIME! Here is the unofficial Marvel toy board. C'mon in and talk ML, MU, Select, and all of the other Marvel toy lines.
Post Reply
926 posts

I at some point am prob gonna find my Pratt head from the Ego 2 pack and put that on the L&T figure. I am using the masked head on that one, so it would work
Top

Well, I got my gift card the other day, and snagged Groot. He came down to retail price that day amazingly. Good snag. Probably going to use the rest of the money to partially pay for No Way Home 4K.
Top

Can someone snap a quick pic of Ravager Thor next to the tank top movie Wolverine, please? Would love to see how those bare arms compare.
Top

Leo Prime wrote: ↑
Fri May 20, 2022 5:41 pm
Can someone snap a quick pic of Ravager Thor next to the tank top movie Wolverine, please? Would love to see how those bare arms compare.

Shart did a quick comparison in his review. https://youtu.be/FQD_TyZiRwo

Odd Stormbreaker is smaller than previous versions while Mjolnir is larger ....
Top

I took an exploratory boil and pry at the new Mjolnir and discovered it does actually have a round profile up inside the socket such that it could rotate, 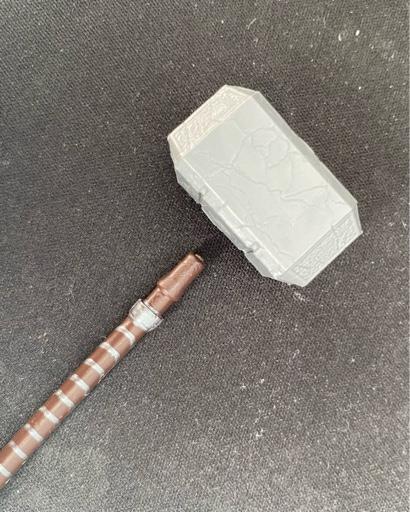 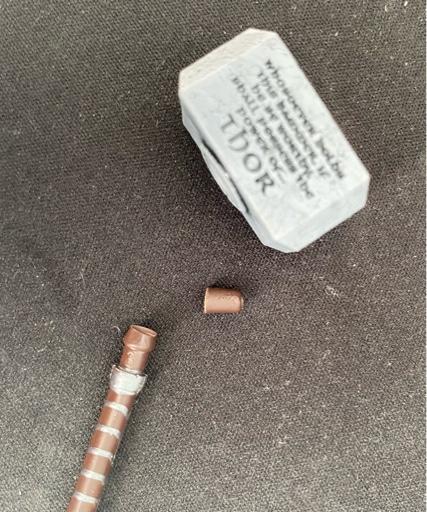 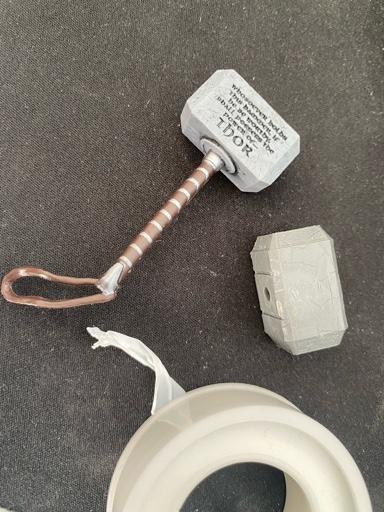 Pretty happy with this now being my preferred definitive version of the weapon, although I think I’ll give it a silver drybrushing so that it has a metallic look for being forged from Uru rather than this more stone-like appearance

Additionally it sounds like people are as meh about the decreasing scaling of Stormbreaker as I am, so if that bugs you more than the accuracy of the detailing like it did for me, then you might like to get hold of one of these key rings 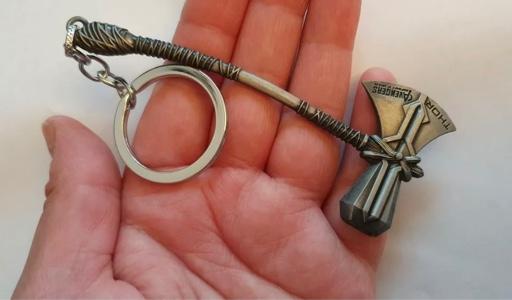 They’re a bit heavier and seem to be based off concept art but if you fill the lettering on the blade, perhaps dab some hot solder into the etched grooves, and grind off the loop for the chain at the bottom, then it could be painted up and look nice with various movie Thor figures.

I got one after i discovered how gummy the storm breaker with IW Thor was, but just haven’t gotten around to dealing with the lettering and painting

New trailer is out!
Top

Yeah it's safe to say Hasbro definitely dropped the ball on Gorr (though it's also possible that the concept art they got didn't do a good job of conveying the character's look).

It was a fun trailer, but I kind of prefer the theme/feel of the first trailer.

Either way, it won't be long now.

Gorr def looks better on screen than the figure but still has the weak cosplay vibe that Zeus has. Ordinarily I’d be firmly in the “give me all the gods you have” camp regarding figures of mythology characters but Zeus looks less majestic somehow than when Crowe played Jor-El.

The background stuff has some nice scale stuff like the titanic corpse we see but the foreground characters seem a mixed bag more on a par with tv shows like Xena. I get the impression what Gorr lacks visually will be made up for by Bale’s performance, and so the figure will take on a more imposing presence on the shelf once we fully see that, so maybe they should have kept Gorr back for a second wave and given folks the Miek they badly wanted or an armoured Heimdall to fill the legacy gap.

I still think it’s a shame they didn’t do Gorr like his comic aesthetic, the tentacles and lack of nose would have taken on a sort of ‘Davey Jones in space’ feel, and that’s really what you want so we don’t get another understated villain like Malekith who I liked but just doesn’t feel memorable.

Spoiler! :
I swear the first time you see him in the trailer, he has a lot less nose and is closer to his comic appearance. He definitely appears to change over time or maybe the more he uses his powers?

Either way, I'm betting we get a set with him with a more ghostly head and armored Thor with bare arms and non-helmet head.
Top

I really hope we get a bare arms and helmetless version. At this point I'm pretty much set on getting a second Ravager Thor so I can make the Armored Thor bucketless.
Top

Gorr looks cool in the trailer. After trailer, I am hoping for an eventual release of Zeus. Zeus and Miek are so far my biggest wants based on the marketing that we didn't already get
Top

He shall henceforth be know as Flicked Thor