IT'S CLOBBERING TIME! Here is the unofficial Marvel toy board. C'mon in and talk ML, MU, Select, and all of the other Marvel toy lines.
Post Reply
3619 posts

LivingTribunal wrote:The Sentinel box art does wrap around and the Galactus box art is portrait oriented, so they might have something else planned for the other faces of the box.

Yeah, that’s what I am thinking since the Sentinel box art wraps around the whole box and features the characters in the ML HoX/PoX wave as well as Mastermold, Bastion, and female Sentinel Prime. I have a feeling that we will see another wave or set featured on the Galactus box art beyond the heralds (may just be the Fantastic Four, but we’ll see).
Top

Anyone else get an email from Hasbro Pulse saying Galactus will ship earlier than expected?

Thanks for your order on HasbroPulse.com!
Remember that awesome thing you pre-ordered from us? (See below as a helpful reminder.)
F4741 Marvel Legends Galactus
Well, good news! It's ready to ship earlier than expected!
In the next few days, we will process your order and your form of payment will be charged. Please log in to your account on HasbroPulse.com to make sure your payment and shipping information is correct.
Keep an eye out for your shipping confirmation email!
If you have any questions, feel free to contact us here.
Thanks for being a fan!
Hasbro Pulse

Haven't our cards already been charged for it though? I know mine has
Top

Someone on Reddit claimed this only went out to people who ordered from Pulse UK.

I ordered one from Pulse US and I haven't gotten it, but it has to be a mistake. They're not shipping it anytime soon.
Top

That email had to be sent in error. I can't even begin to imagine Galactus is ready to ship or that Hasbro is THIS capable of finding their way around the global logistics kerfluffle.
Top 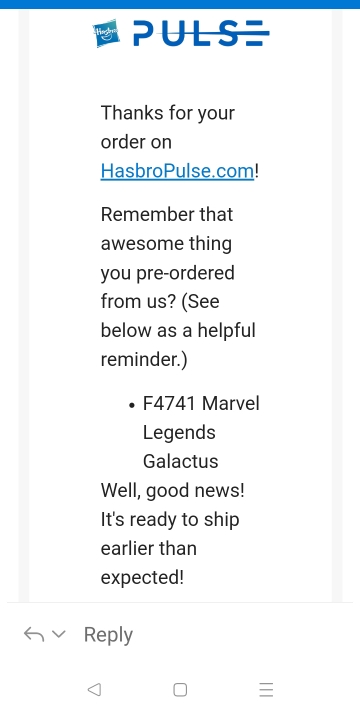 Yeah, can confirm I just had the email from HP UK - not sure I’m ready for that huge chunk of plastic yet!

I assume someone jumped the gun.

Dan tweeted that Galactus will NOT be shipping early.
Top

Yea, but he didn't say anything about the heralds. Hope they ship out earlier.
Top

Yea, but he didn't say anything about the heralds. Hope they ship out earlier.

They all come together, why would they add another shipping charge and send them early?
Top

That’s obviously not how this is going to work, but it would be a really clever gimmick if they did. Someone posted that idea way back during the campaign and it is really fun thought.
Top

To be honest this was more my main concern, I have no doubt that Galactus won't be shipping anytime soon, it's more the 'Have your card deets ready!' that hit the panic button.
Top