IT'S CLOBBERING TIME! Here is the unofficial Marvel toy board. C'mon in and talk ML, MU, Select, and all of the other Marvel toy lines.
Post Reply
86 posts

Gentlemen, our work here is done. We’ve saved one soul from hell-mart, and that makes it all worth it.
Top

That's some Richard Pryor "Superman III" bulls**t right there. I might just buy you a John Walker myself to make up for it.
Top

I remember the Loki/Corvus fiasco.

That's some Richard Pryor "Superman III" bulls**t right there. I might just buy you a John Walker myself to make up for it.

Haw, no worries! I got them elsewhere, and I'm happy to get the Walker in the regular wave.

changoleon wrote: ↑
Wed Mar 31, 2021 5:54 pm
DO NOT PREORDER WITH WALMART, they are the worst I was charge 9 times for the 2 pack (loki/corvous), I never get the pack, and it took 5 months to fix the "hold", I have to deal personally with my bank for the matter and call walmart more than 20 times.

Ugh, even worse than my story. But I don't want to give them business ever again.

I just buy in stores, I will never again use their web site.
Top

This gives me hope. I'm still kinda new to all the online ordering. I've been fortunate enough to find almost everyone in stores. But the pandemic forced me into online shopping so I just impulsively buy the MLs where ever I see them first. I've been frantically checking my account everyday since seeing these comments haha. So thanks for a little relief on that.
Top

I love that the box is the same as (or at least very similar to) the one he signed in episode 2.
Top

I drove half way across Florida to a Walmart in a retirement community that showed Loki/Corvis in-stock because of the on-line BS. Yes, the set eventually became available.

Black Widow finally got thankfully but the box was trashed.

Cable was already discounted for in-store purchase before Walmart finally shipped day one pre-order. They only lowered the price by $2 after I called and emailed customer service.

The worst Walmartism was the exclusive Captain Marvel. I could not find the figure in-store. I flew to five states, the first week, Nothing. Thankfully, got the figure out of the UK but that was after I made a custom from the basic figure. 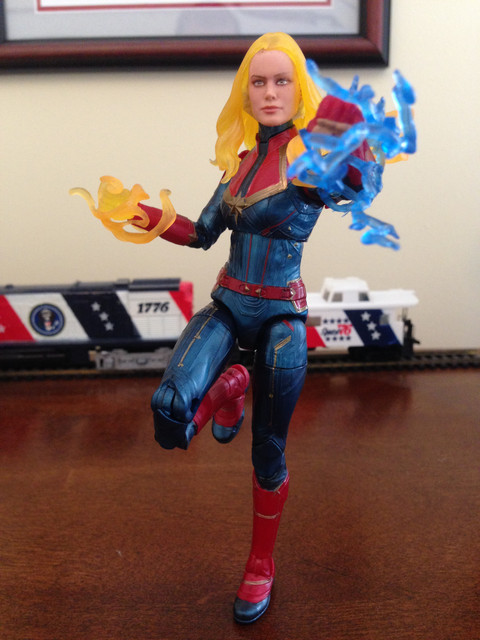 Then a couple of months later the exclusive figure was a serious peg-warmer.
Top

Yeah Walmart is bad for preorders. I preordered the Wendigo wave from them about a month or so before it was supposed to release and they charged me multiple times before it was supposed to be released. The charges would drop off randomly but I had the charges pending which also messed up my balance because I also had recurring payments for bills. When I canceled the order the charges finally stopped. It's too much of a hassle. That's why I only preorder from sites that only charge you when your item is actually in stock and preparing to ship but it sucks if your trying to get store exclusives.

Luckily Walmart's in my area tend to get MCU figures including exclusives without issues.

That's not even including preorders randomly being canceled.

I pre ordered about 12 332nd black series clone troopers at various dates every time i saw them up, the ones that got cancelled were the first two i got seconds after they went live. All the ones i ordered much later got delivered.
Top

Hbhf wrote:Hopefully Walker Cap indicates there will be some additional exclusives and box sets for those wanting characters like Sharon, Battlestar or even just Sam in his current Falcon look.


maczero wrote: ↑
Tue Mar 30, 2021 3:13 pm
I think I'm going to hold off on this until I see what the main wave Walker looks like. BTW, I'm not asking to see any leaked photos. I'm happy to wait until official photos are released.

As for this being a Wally exclusive, yeah it kinda bites. It's not that they're hard to find. They just take so long to actually reach the stores and by then there seems to be a plethora of them that they wind up hitting clearance within a month. That's great if you have the patience (and I usually do) but waiting backfired on me when it came to Power & Glory Cap.

It's weird because I always have good luck with the Target exclusives. I have no idea what it is with Walmart that makes finding anything at them such a nightmare.

Sent from my SM-G981B using Tapatalk